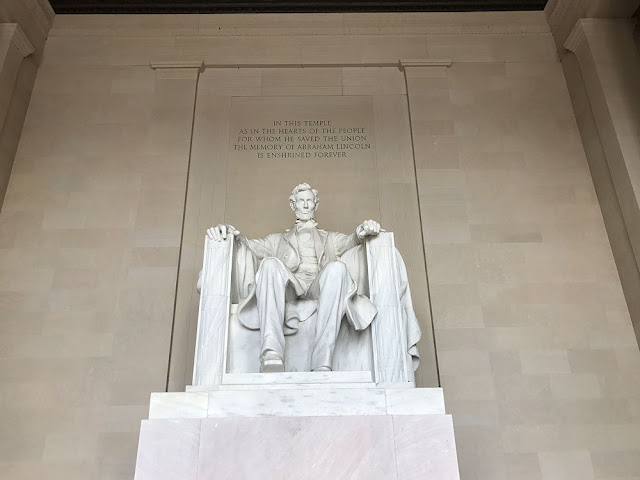 It was a very busy month for us.  We took a break from our painting projects to welcome Bill, who is a relative of mine (fifth cousin twice removed) who found Gregg on Ancestry.Com, and they have been keeping in touch for two years now.  Many of you know all about him as I have been documenting our time together. 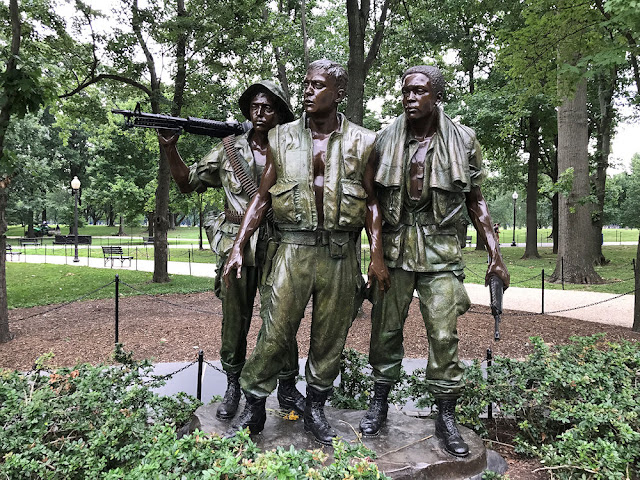 Bill was heading over here for a Lion's Convention in Chicago, also visiting cousins on the West Coast and here on the East Coast.  We invited him to stay with us, and we had a wonderful ten days getting to know each other, showing him the sights.  It all seemed to go very quickly, and in no time at all we were taking him back to the airport in Richmond, for his early morning flight, leaving home at 3.00 a.m. on the 16th July.  At 83 he was off on one more stop in the US, two more stops in Great Britain, one more stop in another country before getting back home to New Zealand.  We can't tell you how impressed we were at his get-up-and-go.  A good role model for sure.  You can click on the label, Bill's Visit_Arrived 7-5-17, below this post to see all the photos I shared. 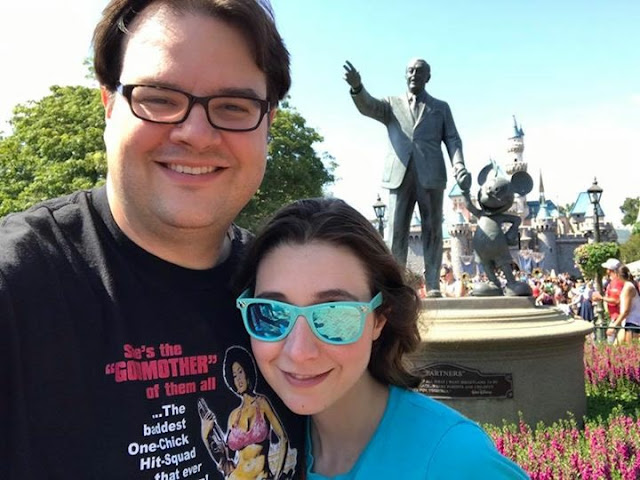 A few days later we were taking our son and daughter-in-law to the airport, in Baltimore this time, at around the same time.  They were going to their annual vacation in San Diego, to attend four days at ComiCon, with a couple of days looking around after that had finished.  We lived vicariously through their adventures. 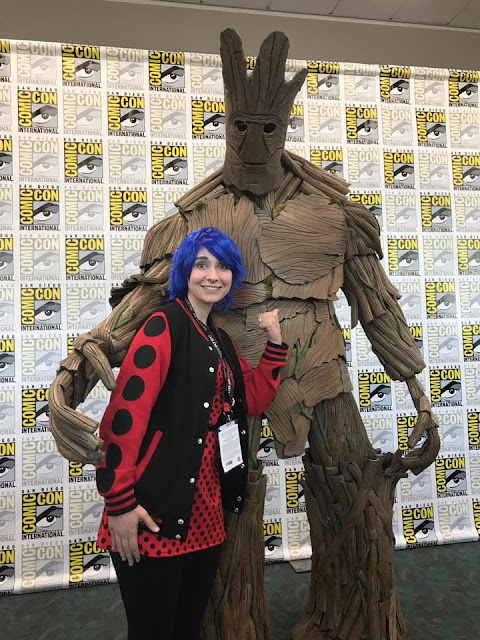 Driving back from that first trip, as the freeway was super heavy, the GPS directed us through Washington DC.  The sun was rising and it was such a beautiful time of the day to see the city. 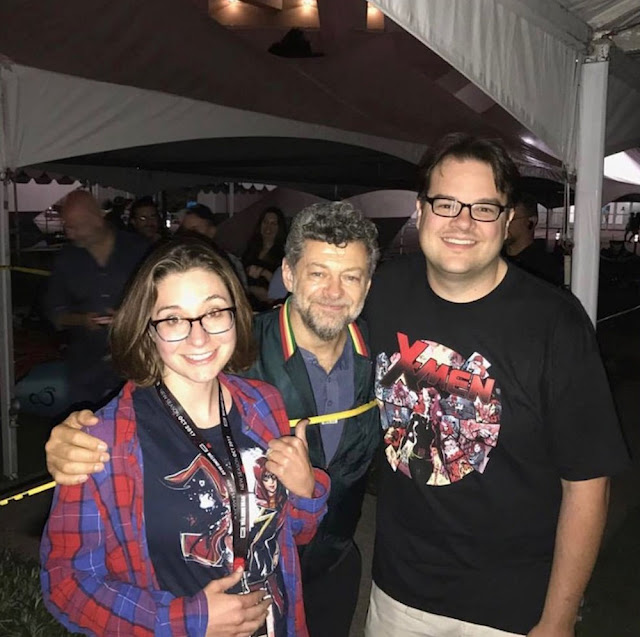 (Here they are with Andy Serkis, a talented actor I first heard about from the Lord of the Rings movies and who now plays Caesar in Planet of the Apes.  He made the rounds after midnight and said hello to all the fans who were camped out waiting to get into Hall H the next day.  Our son and daughter-in-law took their turn keeping spaces open for a group of friends.  Everyone took their turn saving a space and apparently this is a very acceptable practice with the hundreds of people who camp out overnight.) 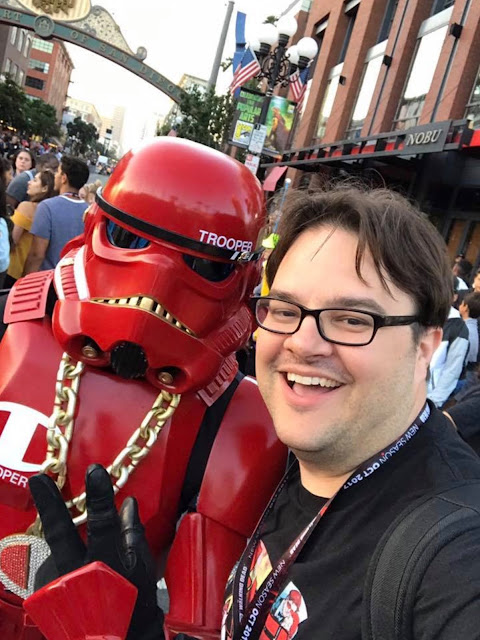 (Our son with the rapping stormtrooper.  They saw oodles of panels from movies and TV shows in Hall H.) 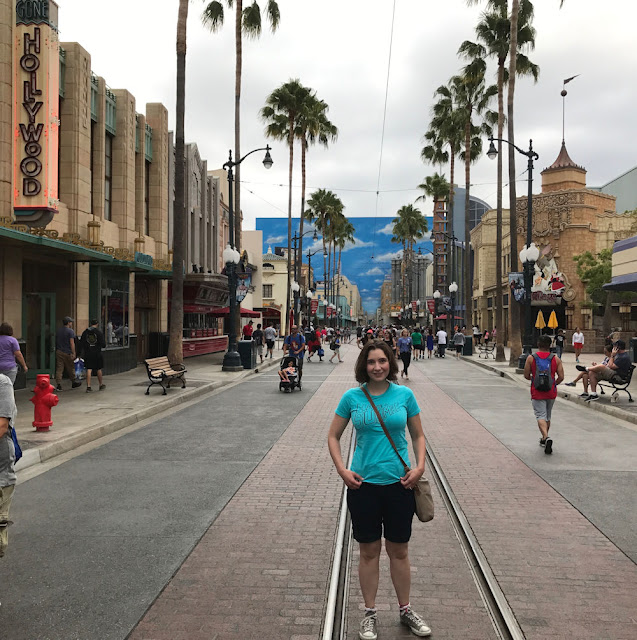 We repeated the trip to Baltimore just over a week later to pick them up.  They caught the red-eye from San Diego, and we again left at 3.00 a.m. to be in time to pick them up.  It was fun to see what was going on at that time of the day. 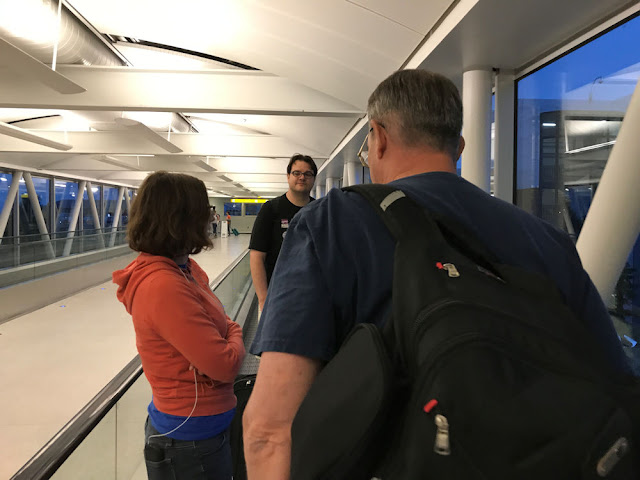 Baltimore Airport was hopping.  I was really surprised at how many people were checking in for flights.  Soon after arriving at the gate we greeted our Darlings. 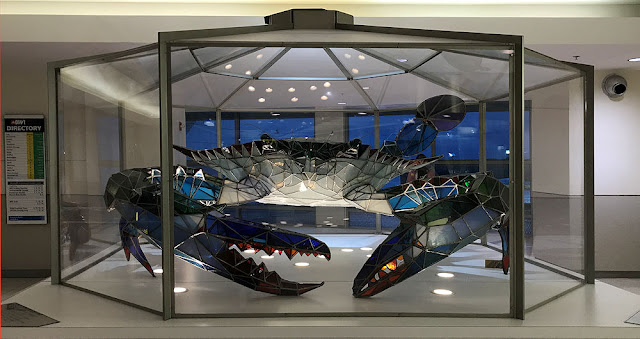 I had remembered to bring pillows for the back seat and they were welcomed gratefully.  It was fun chatting to them about their trip, the people they had met and it was a very successful holiday. 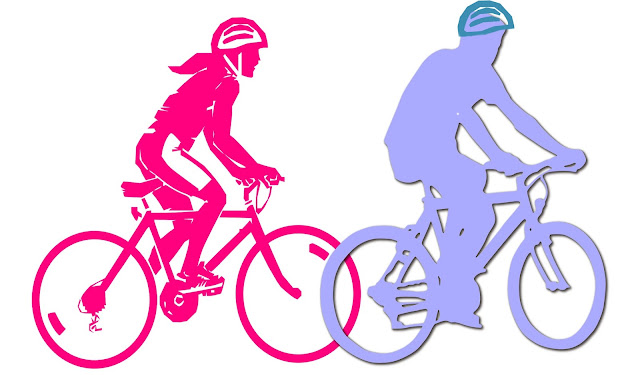 We made three significant purchases this week. Gregg has been talking about getting bicycles.  I was rather luke warm on the idea, still am truth be told.  The thought makes me very nervous.  Yes I am a nervous nelly (that's for Gregg's benefit).

When we were first married we had bikes and rode them everywhere.  I often used mine to go to the local shopping mall on my own (I used bike paths and didn't have to worry too much about traffic).  I refused to drive a car for that first year I was in the country, having ended up on the wrong side of the road one very dark night.  I came from a village, quiet country lanes and the towns weren't that busy either.  Won't go into any more details other than that was it!

We would often go into Washington DC, cycling around the monuments and riding along the C & O Canal.  Sometimes we parked in one of the Pentagon parking lots (Gregg worked there for the first two years of our marriage), where we rode across the Memorial bridge into the city.

Yes I have wonderful memories from our rides in Washington DC, but these are 41 year old memories, and I have been dragging my heels on this new idea.  I am no spring chicken and have a hard time with aching joints, violins playing?  But Gregg has been coaxing me along, saying it would be a great way to get some exercise and I can't argue with that. 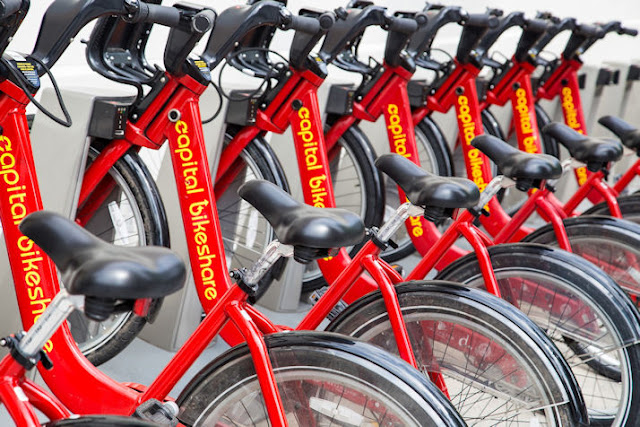 I had agreed that we would go into the city again, after much coaxing, where we would rent a couple of bicycles.  We even bought two bicycle helmets last week.  It has taken me a while to get to this point. 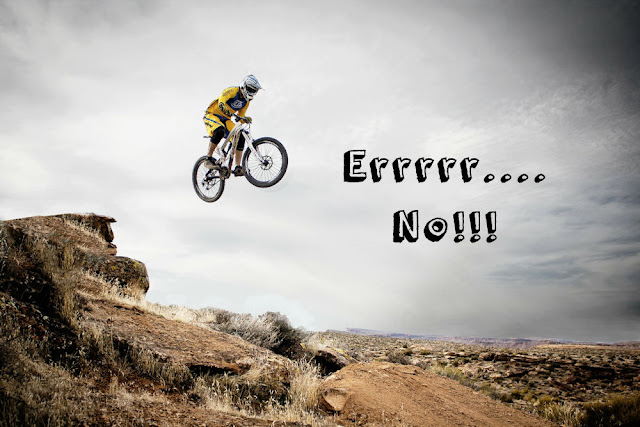 On Sunday we took a friend over to our pasty shop in Vienna.  Whenever my Brit friends come over,  we make our way there for a few nostalgia goodies. It is a British shop and the Union Jack flies outside.  I had forgotten there was a bike store right next door.  Gregg meandered over and he had his eye on one that was on sale but it was too high for him. 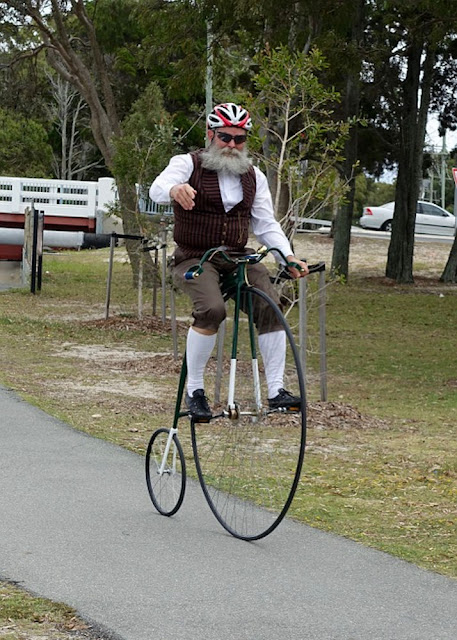 Thankfully the salesman agreed with me and directed him to another. They are holding it until he can go back to pick it up.  We will be having to purchase a bike rack. 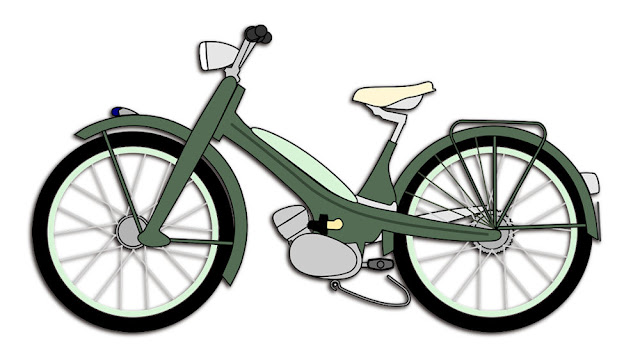 So, there you go, the die is cast, and I suppose an electric bike is next because I told him there was no way my knees could handle a regular bike, thinking it would get me out of this whole thing, but he said, "You need an electric bike" so that ploy didn't work either.  I told him to get a whole lot of bubble wrap for me  as not having been on a bike for 40 years, I was going to need it.  Stay tuned! 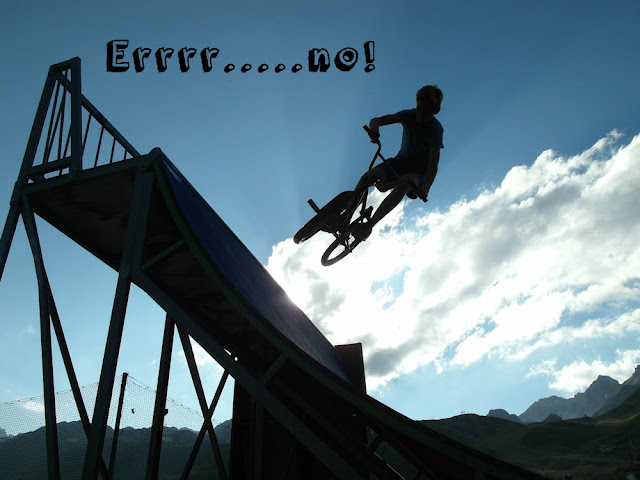 As I mentioned, one of my friends stayed the night on Saturday.  We met up with another friend that day.  We all live several miles apart now, and I live in the middle.  So, with one friend staying the night, the two of us drove to see our other friend who treated us out to lunch. 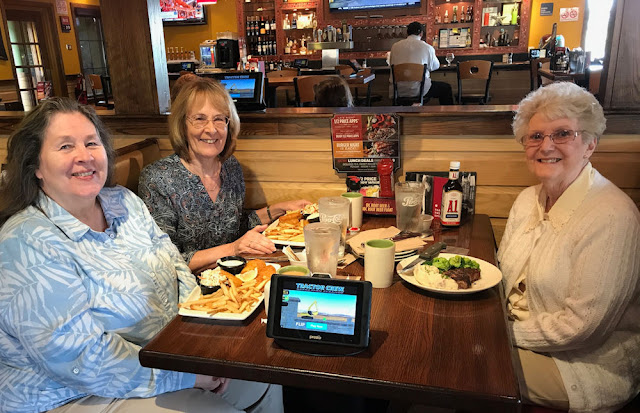 We went back to her house for a delicious dessert and a cup of tea, along with a wonderfully long natter.  It had been several weeks since the last time we had gotten together and we had a lot of catching up to do.

The two of us left our friend and drove home. It took us about an hour-and-a-half and it goes through the prettiest countryside. A couple of days earlier I had come across a British TV comedy/drama called 'The Durrell of Corfu'. I subscribe to Amazon Prime and the first season is part of the subscription. It is about a widow who basically has had enough and takes her four very self-absorbed children to the Greek Island. It is a great show and we both enjoyed it very much. The day after I introduced Gregg to it, and was very happy when he started laughing. What a great show!  Has anyone out there seen it, and if so what do you think?


We had a lovely long conversation with my niece in Germany, whom I have mentioned many times before.  This is my sister's daughter and we have been close to her ever since she was a baby. We may have a lot of miles between us, but we have gotten together as often as we could, with her Dad also, and there's much contact with Skype and Facetime, and even texting.   We are sowing the seeds for getting together, there is a holiday in our future.  Can't wait!

That's what has been going on during the past month.  July has been a month of visiting with family members and close friends.

I'll finish off by saying that the weather has not exactly been colder, but cooler than the 90s we have been experiencing.  For the next ten days it won't get up that high, supposedly in the low 80s a week from now.  The humidity has been a lot better too.   We turned off the air-conditioning yesterday and had the windows open overnight.  It was heavenly.

Good bike riding weather Gregg has just said laughing.  I won't tell you what I said but at least I am smiling.

(All my bicycle photos were from Pixababy.com)
Posted by DeniseinVA at 7:06 PM