THE WASHINGTON NATIONAL CATHEDRAL - A 5.8 EARTHQUAKE....

that occurred at 1.51 p.m. on August 23rd, 2011, caused more than $34 million in damage to the Cathedral.   This earthquake was the largest the East Coast had experienced in 115 years. 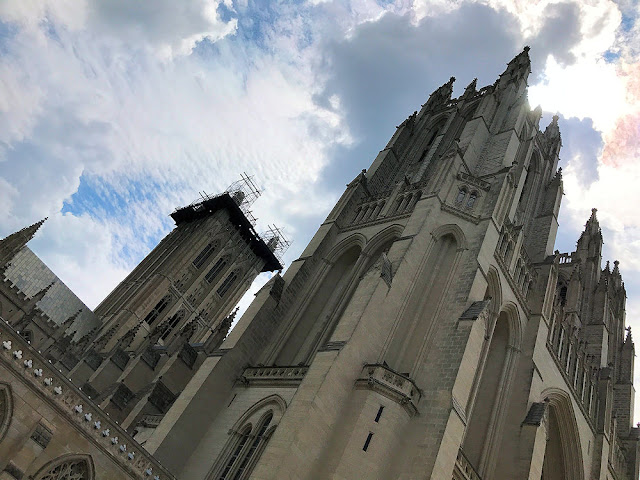 Pinnacles weighing hundreds and even thousands of pounds came crashing down.  Fortunately most fell inward onto the structure's parapets, instead of outward, where they could have caused serious bodily harm to those who only moments before had been admiring the cathedral from outside, or who were running out of the cathedral as it shook. 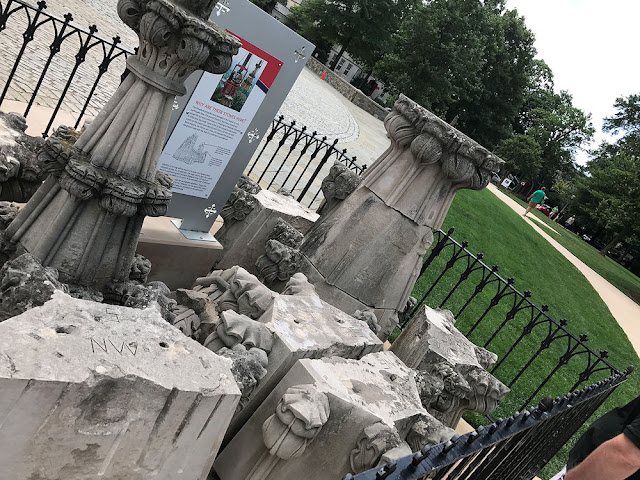 There was a small, fenced off area where some of those fallen pieces were on display, with a description of what was being done.

It reads, "The Earthquake.  On August 23rd, 2011, a magnitude 5.8 earthquake shook the East Coast, causing over $34 million in damage to Washington National Cathedral.  While the Cathedral withstood the quake largely in tact, buttresses cracked, large limestone pinnacles twisted, and hand-carved finials, including these stones, fell.

Work completed.  Through private donations only, the Cathedral was able to raise $10 million in the two years following the earthquake to complete Phase 1 repairs and to restore the interior and provide seismic reinforments and repairs to the
east end flying buttresses.  This work was completed in June 2015.


Not done yet.  While the Cathedral's interior earthquake damage has been repaired, nearly 87% of the exterior still needs restoration.  In March 2016, we began the first part of Phase 2 earthquake efforts, but we have $22 million left to go.  The remaining work can only be completed as gifts are given by donors, foundations and every day people who join us in renewing this house of prayer for all people."

And then it goes on to give the e-mail address where donations can be arranged.

I have to confess that we had no idea this much damage had been done to the Cathedral, and that work was an ongoing process after all these years. 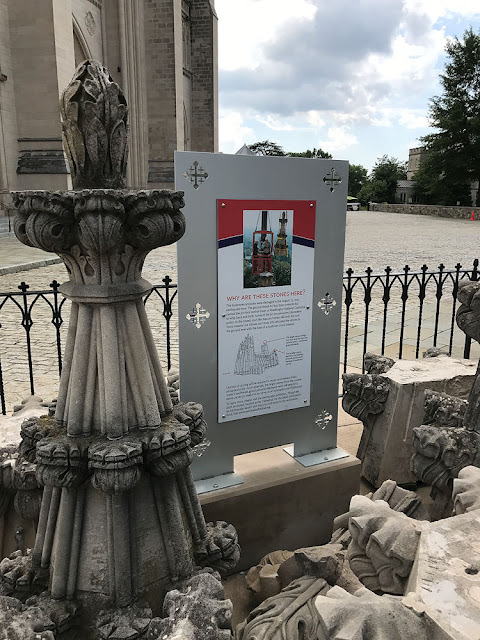 We had parked in an underground car park not too far away from here.  You can see the glass enclosed elevator shafts on the right of the picture below. 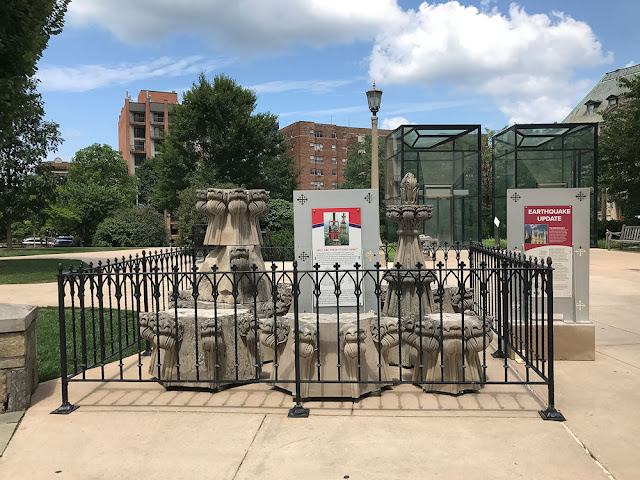 Inside there were other fallen pieces on display... 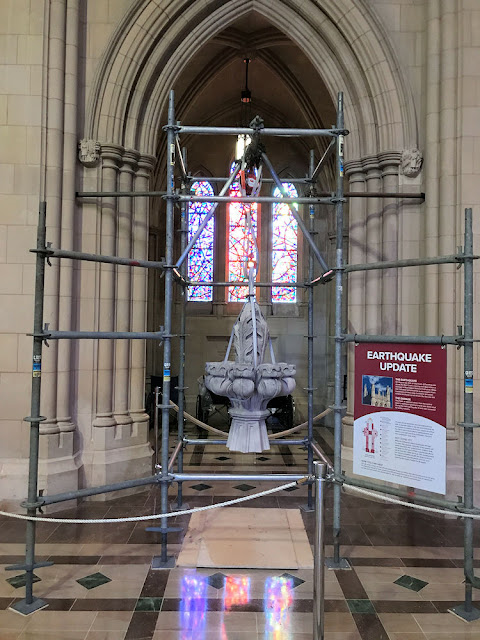 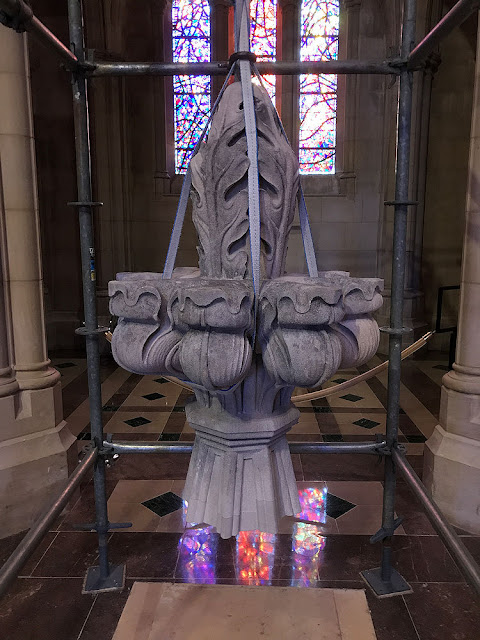 and on the seventh floor there is a whole exhibit. 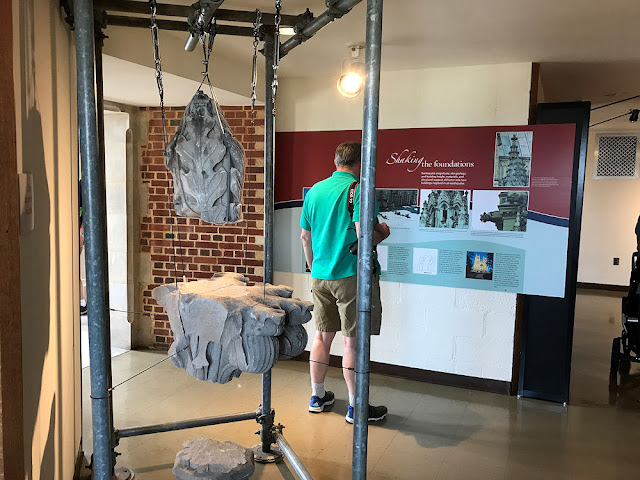 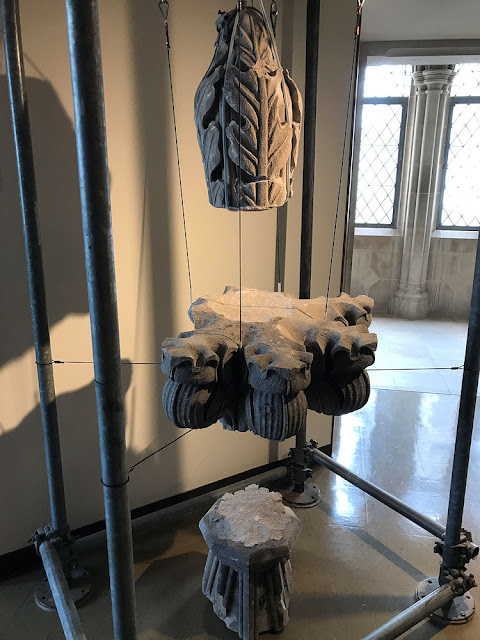 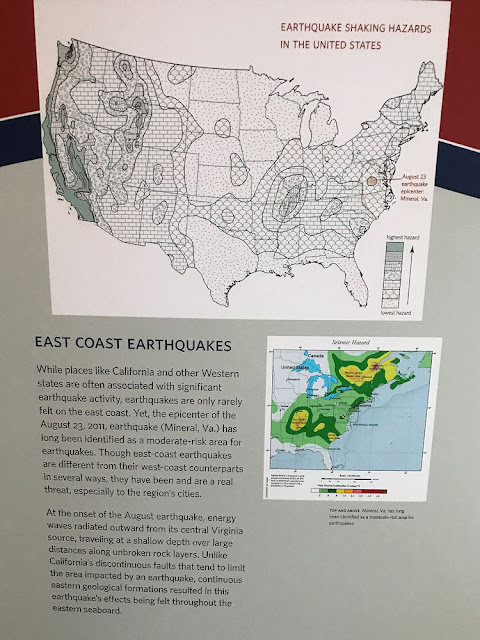 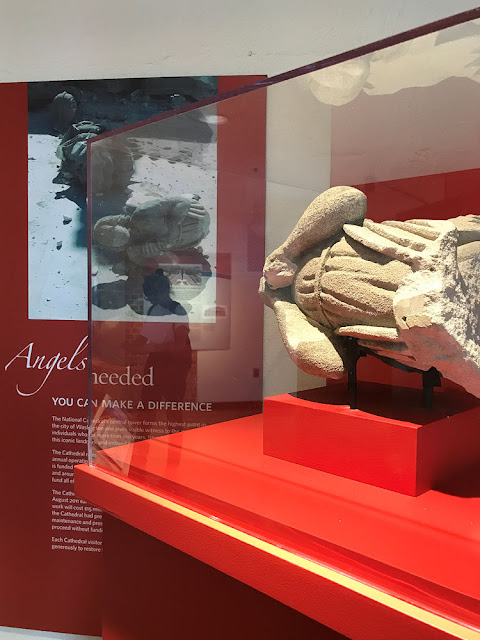 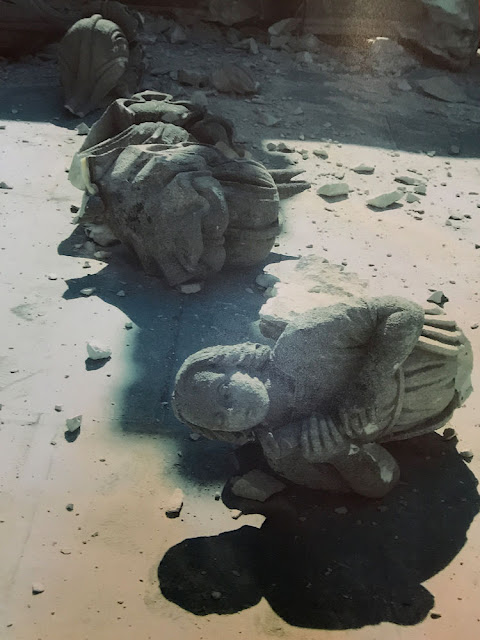 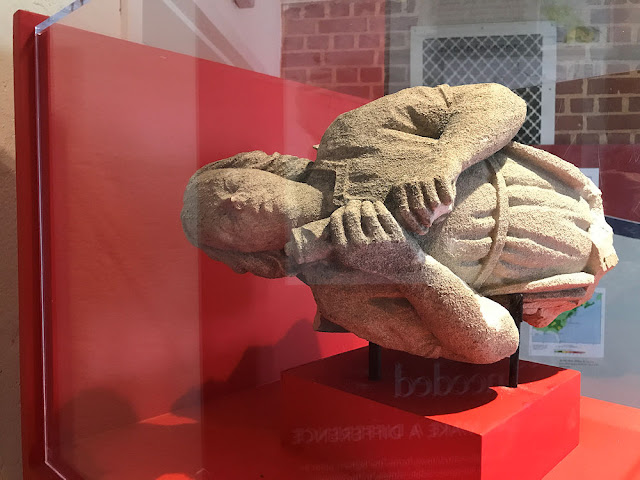 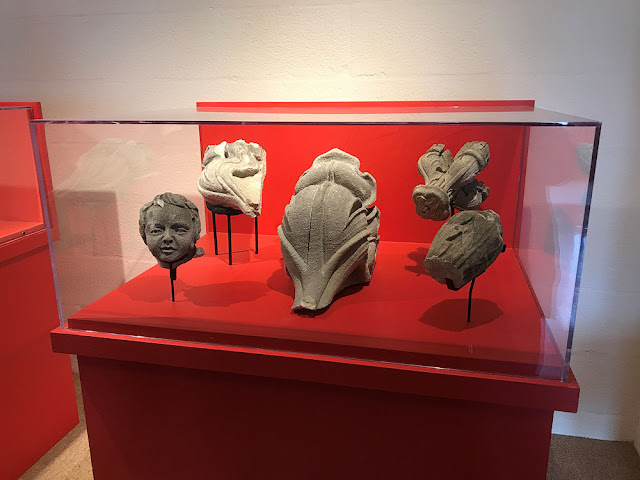 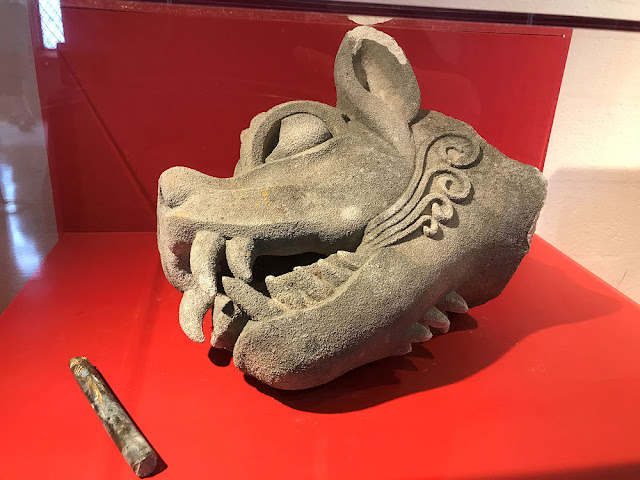 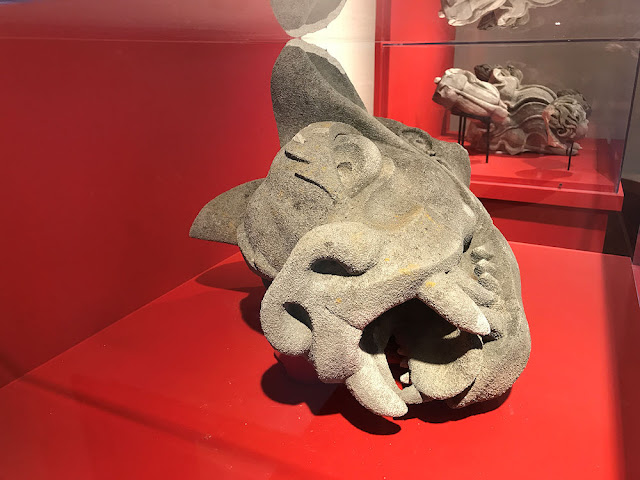 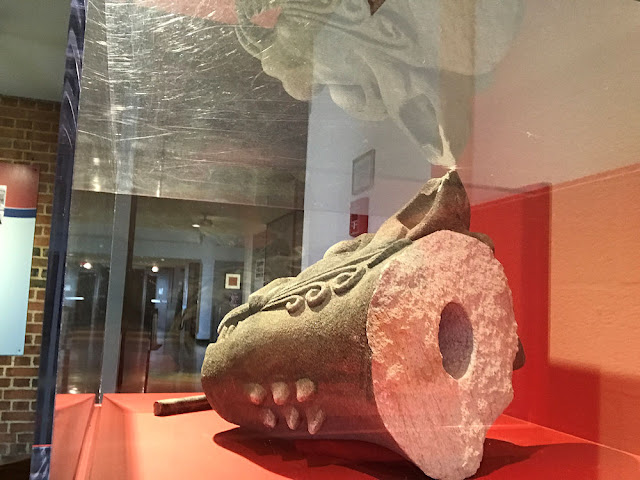 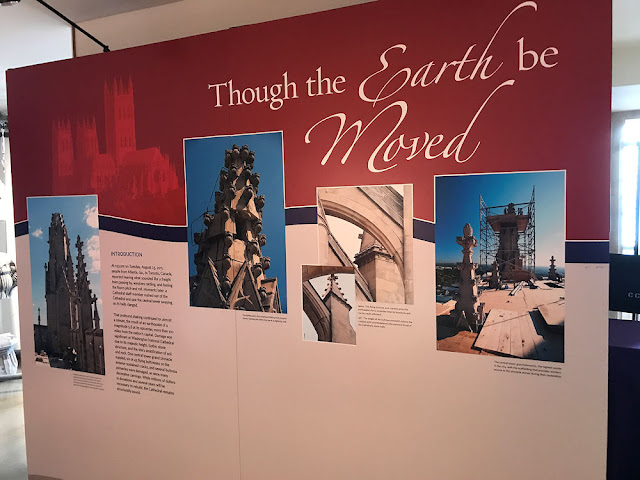 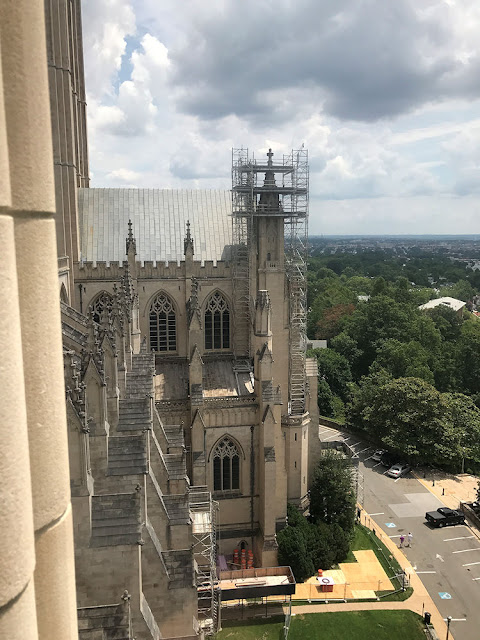 Just for added info, the Washington Monument will be closed indefinitely.  (I read somewhere until 2019.)  It was closed due to damage done in the earthquake and repairs were made.  Additionally its elevators have had numerous problems due to their age and are no longer deemed safe. People are not allowed to use the stairs any more.  Gregg remembers walking to the top when on a school trip to the Nation's Capital in 1961. 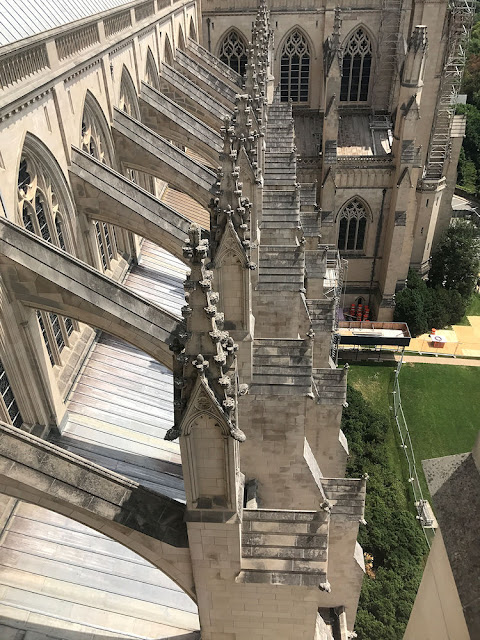 The Washington Monument has a Facebook page which you can see here. 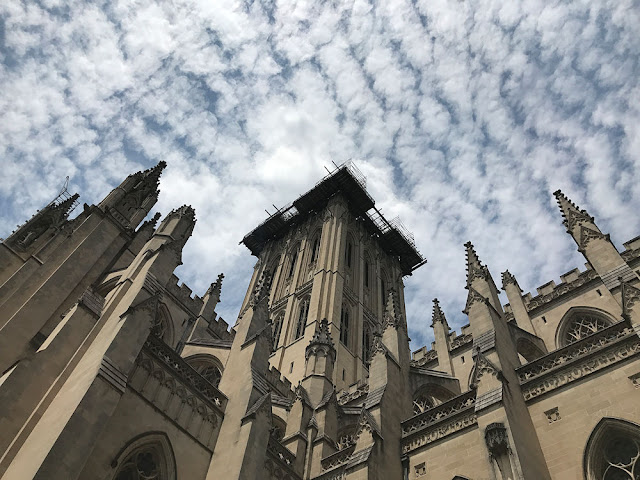