Continuing our walk at the garden, we have just left the ponds and are walking through a wooded area. 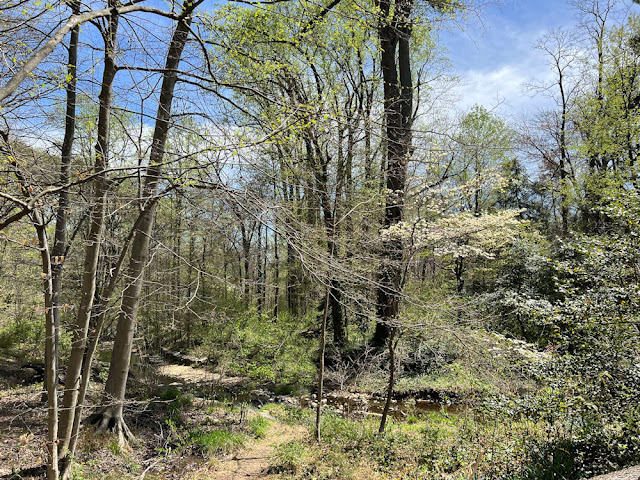 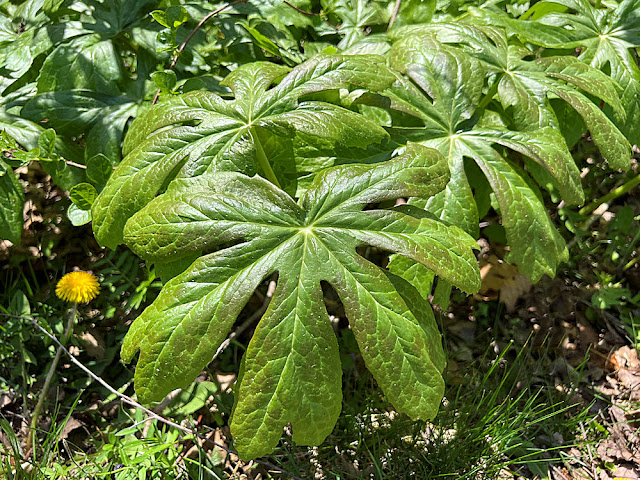 Mayapple (Podophyllum peltatum), also called American mandrake, Wild mandrake, Ground lemon and Mandrake.   They are found in shady locations just like the one we were in when we found it.  You can find them in forests and riverbanks.  We were in a wooded area and near a creek.  It is not poisonous to the touch, though the unripe fruit is toxic.  The mayapple berries are eaten by box turtles and mammals such as opossums, raccoons and skunks. Its symbolism is friendship, happiness and positive emotions, prosperity and good fortune.  This website has very interesting information and photos of various stages. 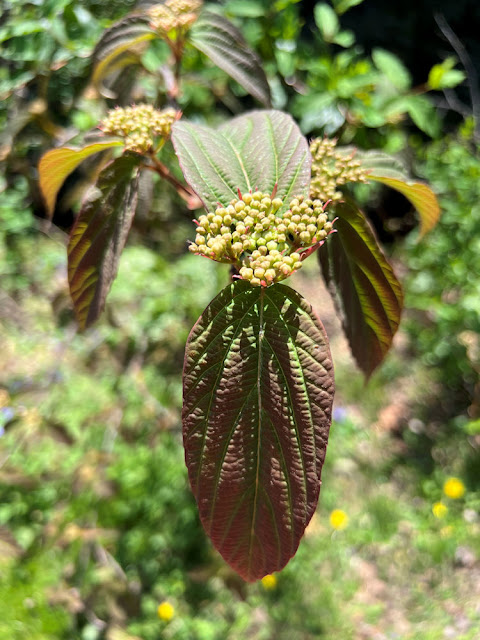 The interesting photo above is the Hobble-Bush (Viburnum lantanoides), also known as Witch-Hobble, Aler-Leaved Viburnum and Moosewood.  It is easily confused with wild hydrangea. Either may have larger flowers around the outer edge of the cluster, though this is more common in hobblebush. Individual tiny hydrangea flowers have 8 or more stamens, while hobblebush has 5. The shape and texture of the leaves are different.  A very interesting website here. 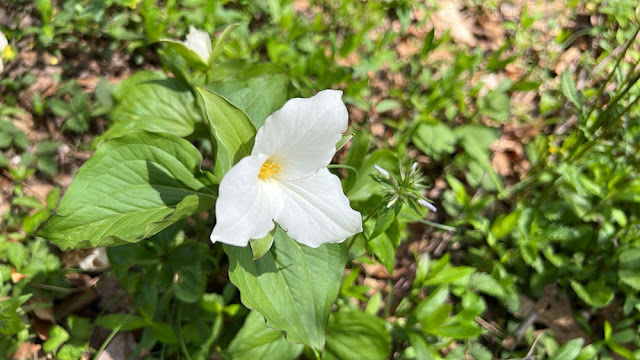 White trillium (Trillium grandiflorum) is a plant I talked about at this link.   It is also called Great white trillium, Snow trillium, White wake-robin and Large-flowered trillium.  It is a flowering plant that is native to the eastern parts of North America, from Quebec, Canada, all the way down to Georgia in the United States and grows as far west as Minnesota. Also east Asia.   It likes partial sun to full shade and is a perennial plant. This pretty yellow flower is a Celandine poppy (Stylophorum diphyllum).  Also known as Woods poppy and Yellow wood poppy, and is native to North America.  This species is considered endangered in Canada.  It grows in the eastern United States and Eastern Canada. 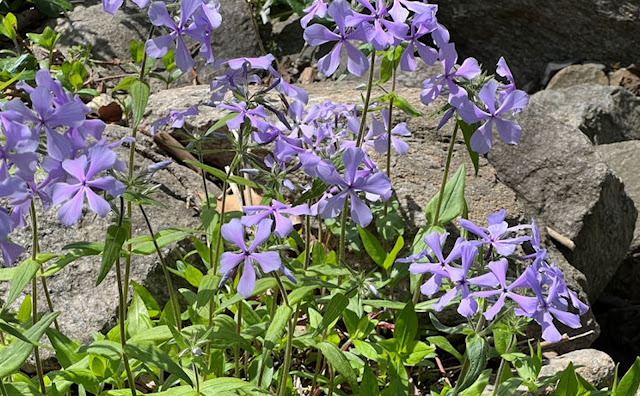 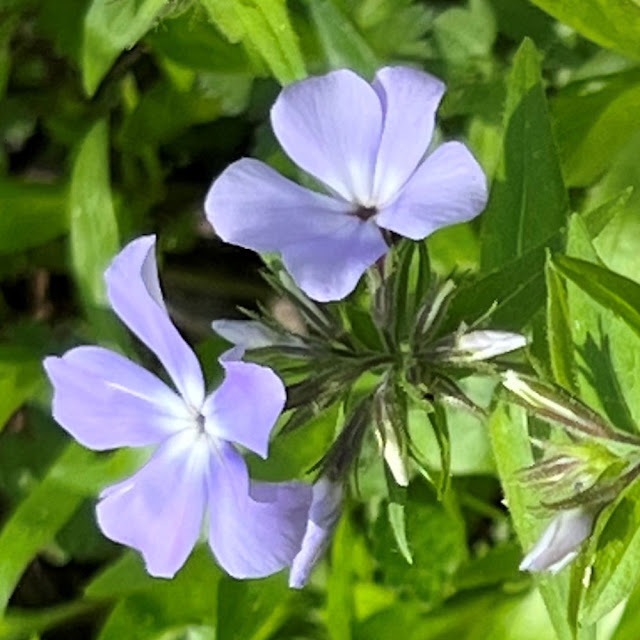 It is indigenous to eastern North America.  Phlox is Greek for "flame", because some flowers of this species have intensely vibrant colors. 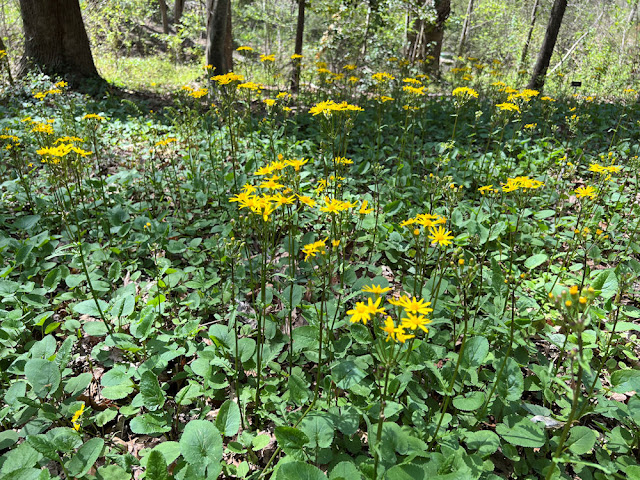 Here we have Golden ragwort (Packera aurea).  Another name is Golden groundsel.  It is a member of the aster family and blooms in spring and summer.  It likes full sun to part shade, and is a perennial. 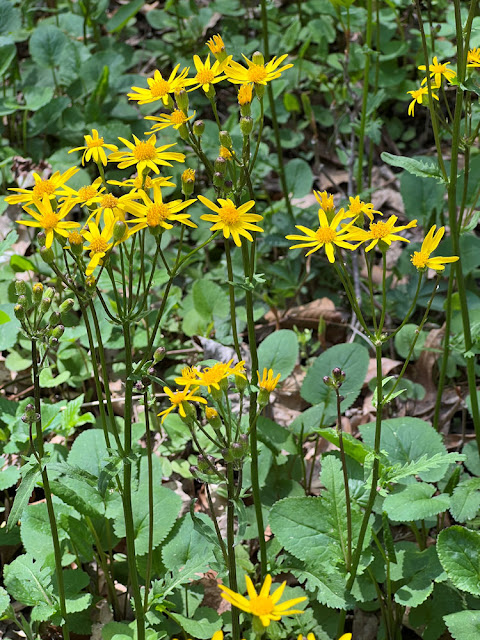 Here is the White Dogwood tree that is my favorite, and one I hope we will be planting to replace the other trees we had to cut down in our back garden.  We are going to have a chat with a professional to make sure it is a good area to plant them. 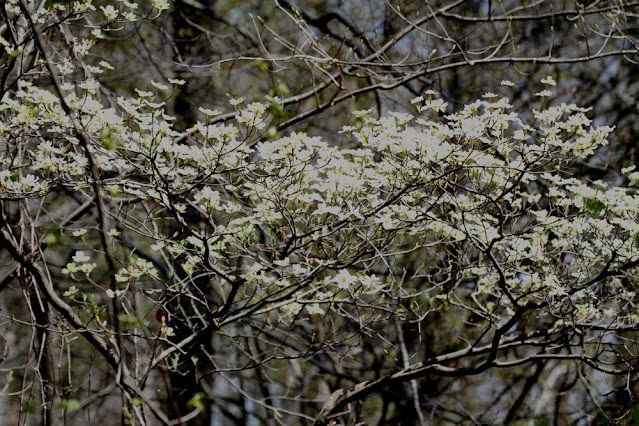 The flower itself is the small, greenish yellow part in the middle of the bloom. The four petal-like parts surrounding the flower aren’t petals at all—they’re actually bracts, a type of modified leaf.  It is also the State flower of Virginia. That's the end of our walk through the wood.  In Part 3 I will be sharing mostly tulips I found in the top part of the garden.
Thank you for looking and enjoy your day.