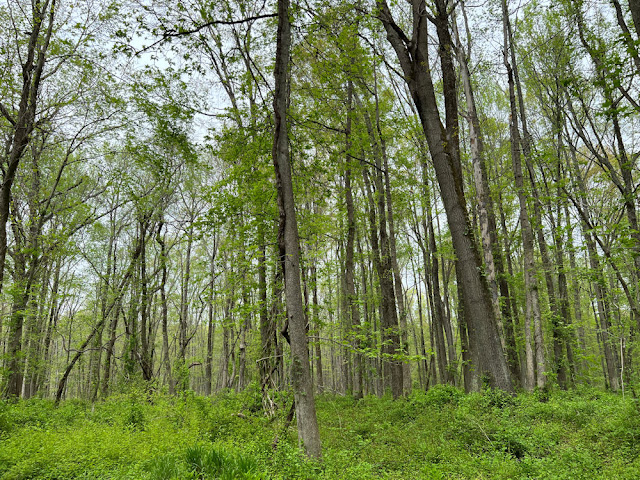 "Everywhere I go, I keep falling in love with the trees and wanting to stay just a little bit longer." 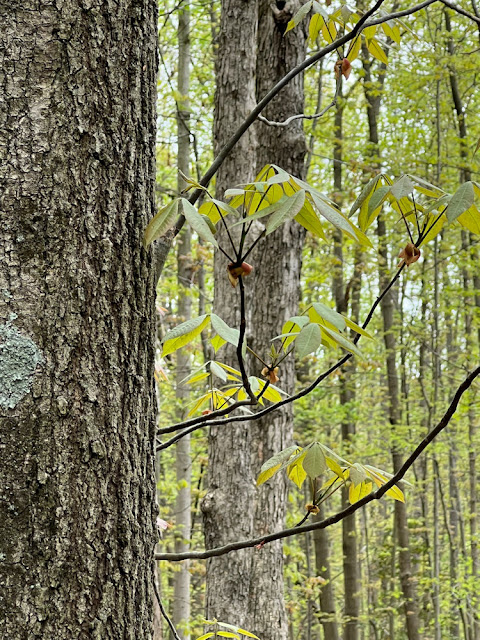 I feel the same way, especially with the new leaves starting to grow.   As are the leaves on the Arrowwood viburnum below (botanical name Viburnum dentatum).  Also known as Arrowwood, Arrow-wood viburnum and Southern arrowwood.  It is native to the eastern United States and Canada, from New Brunswick to Minnesota, and south of Georgia.  It is so named because Native Americans used the strong shoots which developed from the roots for the shafts of their arrows.  It is a fairly small perennial shrub that is part of the honeysuckle family.  In late spring it bears white flowers that stretch roughly 2 to 4 inches across.  Blue-black fruits appear after the flowers, that tend to attract a variety of birds and other wildlife. 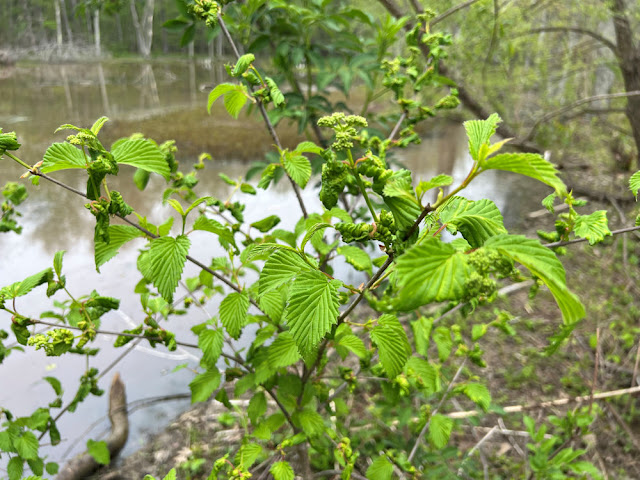 "As I wonder'd the forest, the green leaves among, I heard a wildflower singing a song."
~William Blake~ 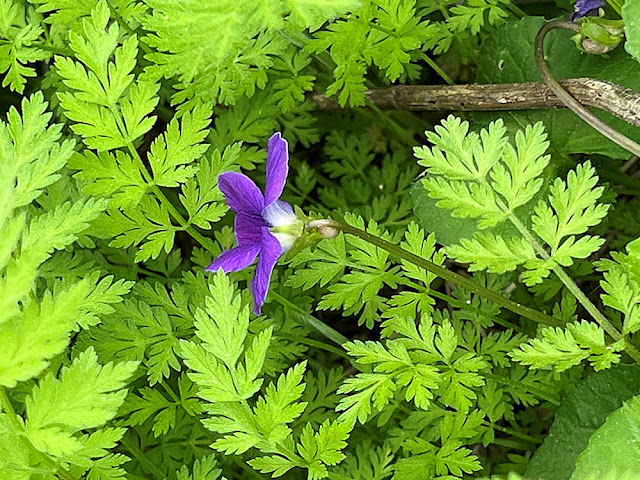 Above you can see the Common blue violet (Botanical name Viola sororia)  Also called Common meadow violet, Wood violet, Hooded violet and Missouri violet.  I mentioned it before in a previous post here, the tenth photo down.  It has an interesting history.  Below you will see a plant called Mayapple, which I talked about at this link.  It is in the second photo on that post. 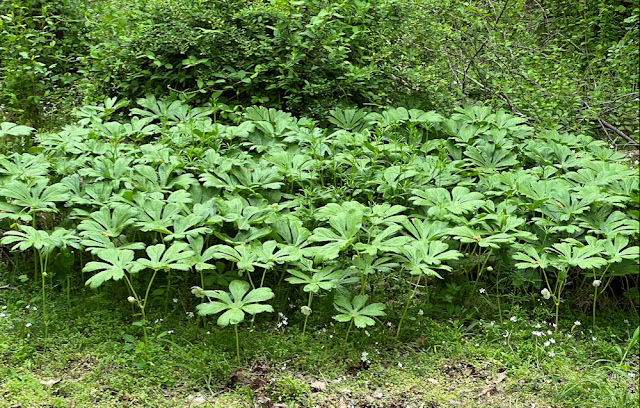 Gregg took the next few photos, of the log and the birds. 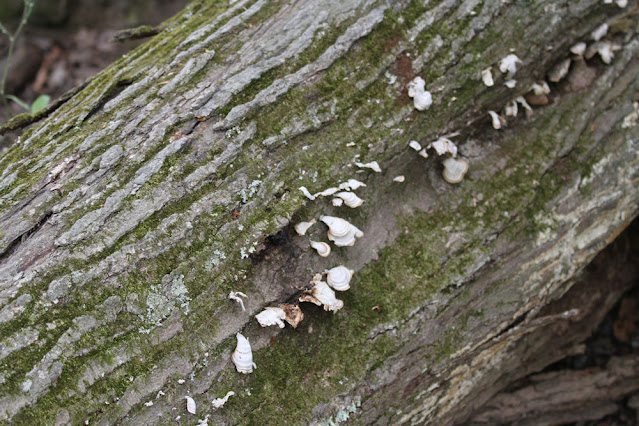 I have no idea what the fungi is growing on the side of the fallen log.  I tried to find an ID online.  I always found similar but none of those I looked at were quite right. 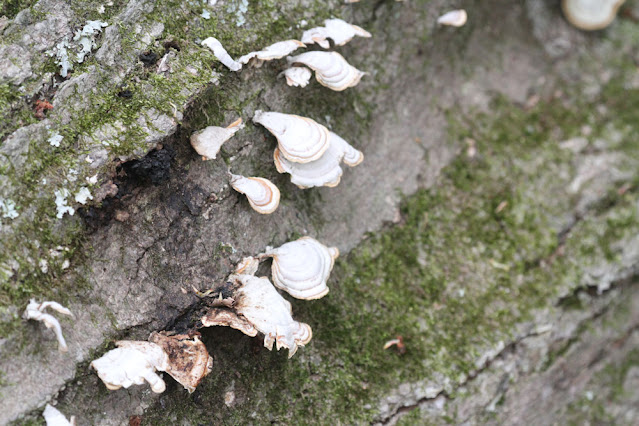 The Northern Cardinal was a little shy... as were the Red-winged Blackbirds. 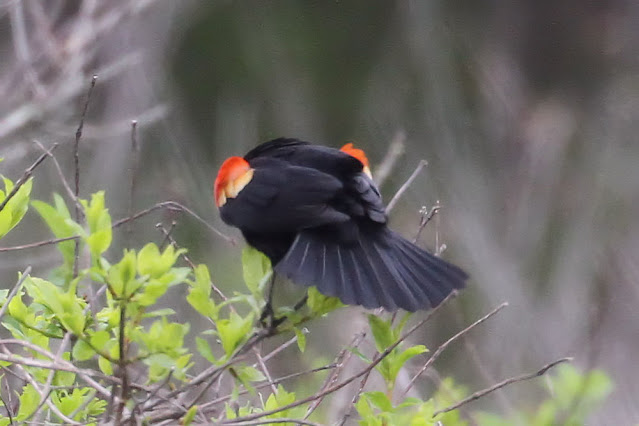 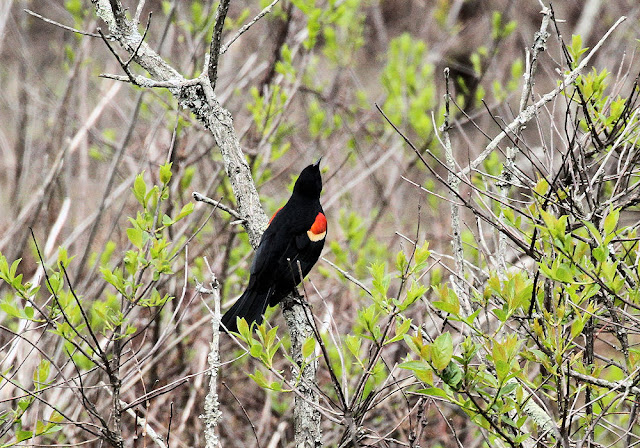 There were pairs of Canada Geese in various areas of the park.  I looked for nests on my way around the park. 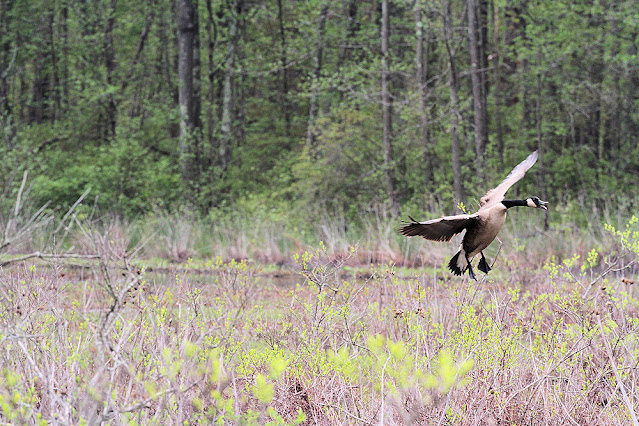 Coming in to land, and a close-up.  There were a lot of noisy geese around. 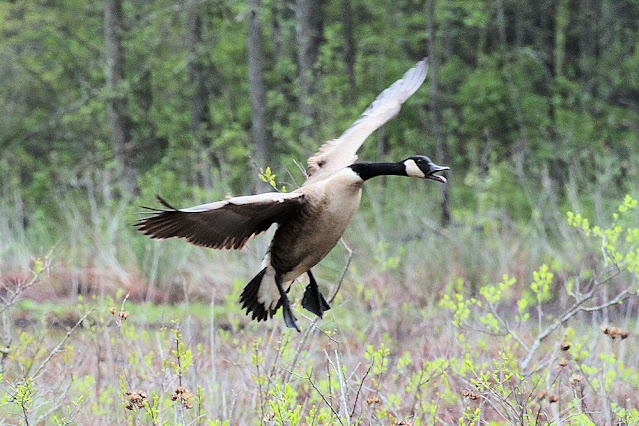 The remaining photos are mine, taken with my cell phone. 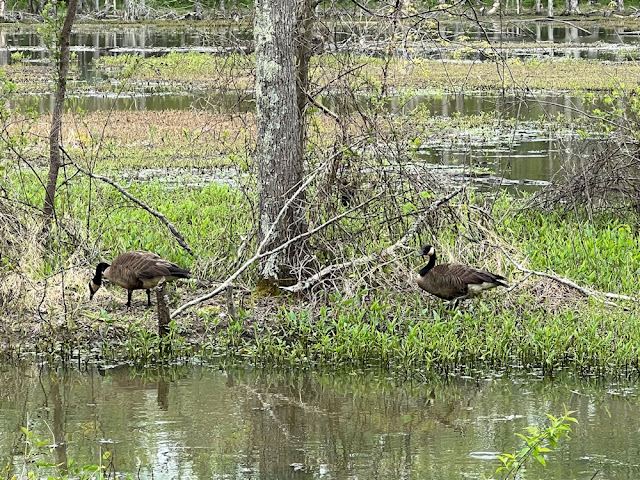 A bit of an overload but they deserve their place in the sun.  I enjoy them too. 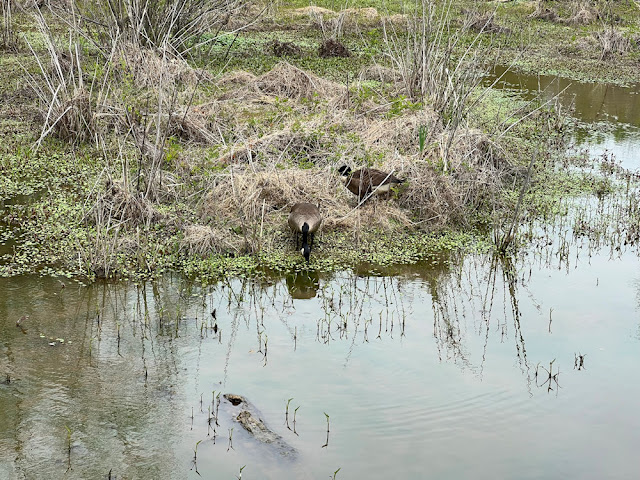 I think there was a nest in there somewhere. 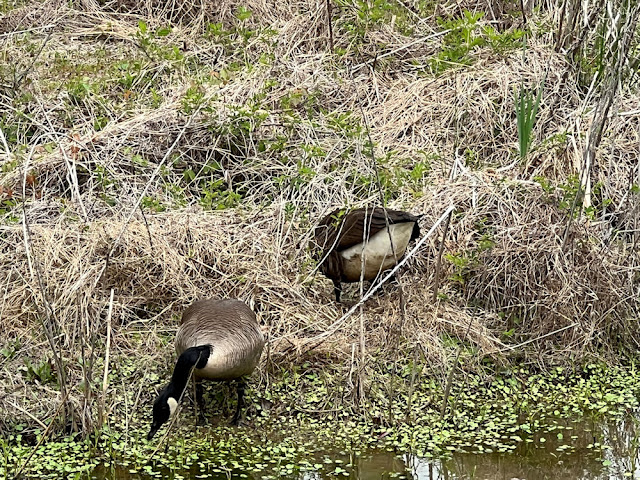 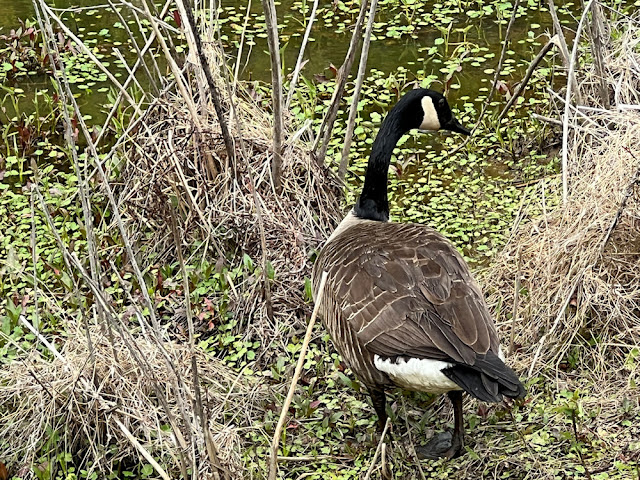 I heard frogs more than I saw them.  There were tadpoles and tiny fish.  It wasn't just the Canada Geese who were making a racket that day.  The frog and his many, many companions sounded like the Hallelujah Chorus.  Well, not quite, but you know what I mean.... 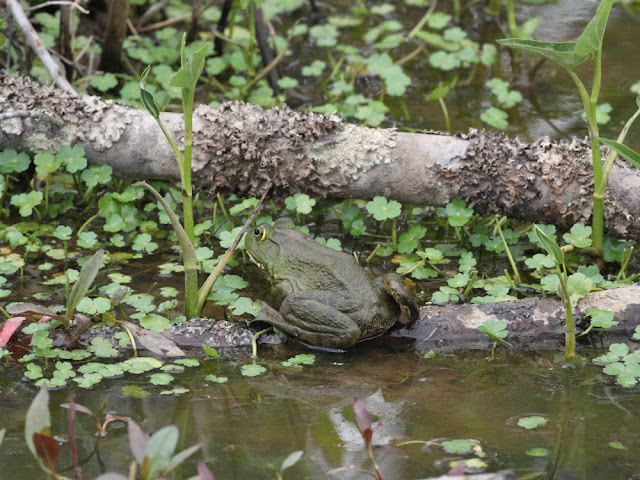 "My parents used to call me 'The Little Frog," because whenever they asked how I knew something, I'd say 'read it,' which sounds a bit like a frog croak."
~Talulah Riley~ 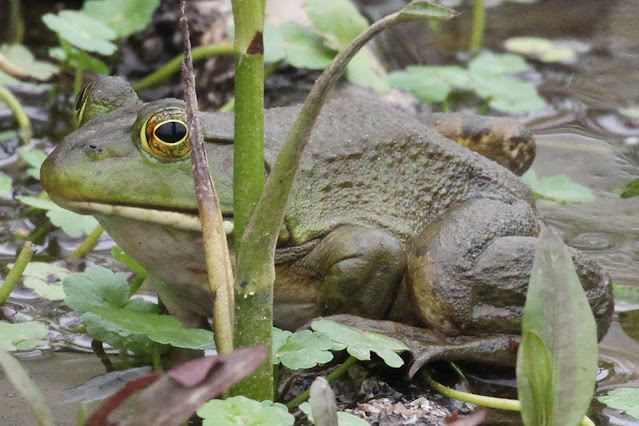 There were also turtles but no more than a stare from any of them, this one included.  (Gregg's photo). 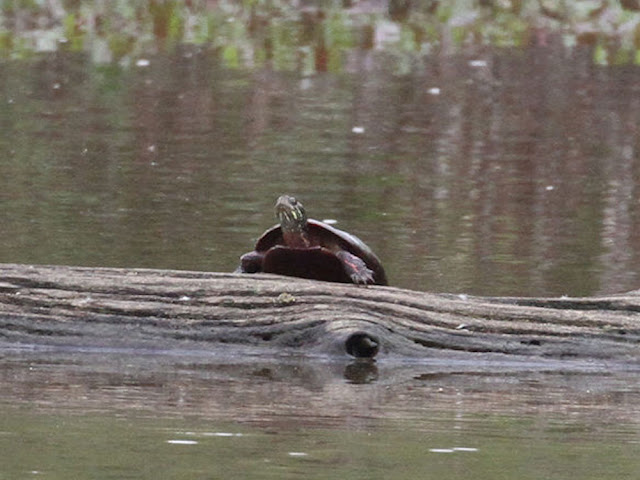 It was a great day for wildlife, and several of our sightings were thanks to other people at the park.  They were very kind sharing what they were looking at, and what they knew about them. 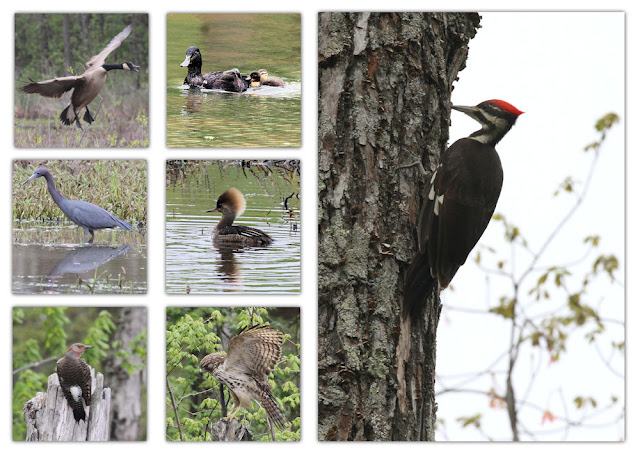 The information board below has been here for a long time but hopefully if you enlarge it, you can read what it says. 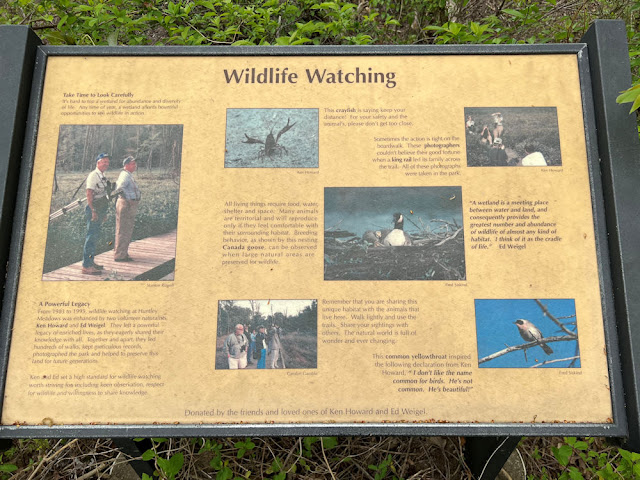 I took this photo of the trees as we were leaving the parking lot. 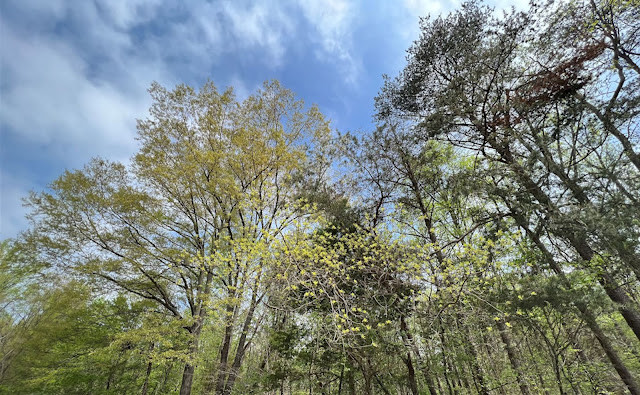 The Dogwoods were still blooming, and these were also in the parking lot. 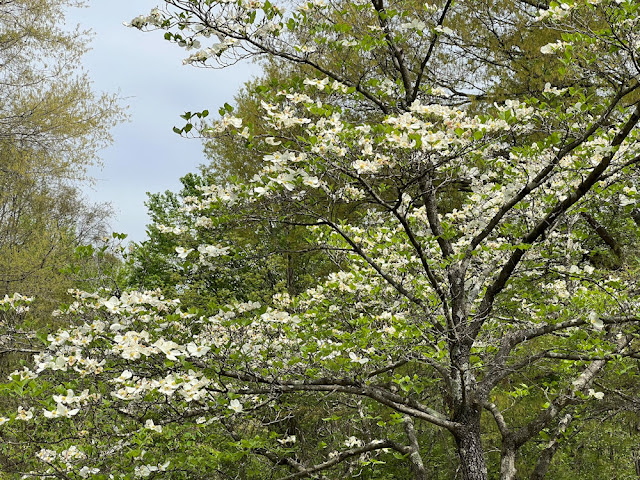 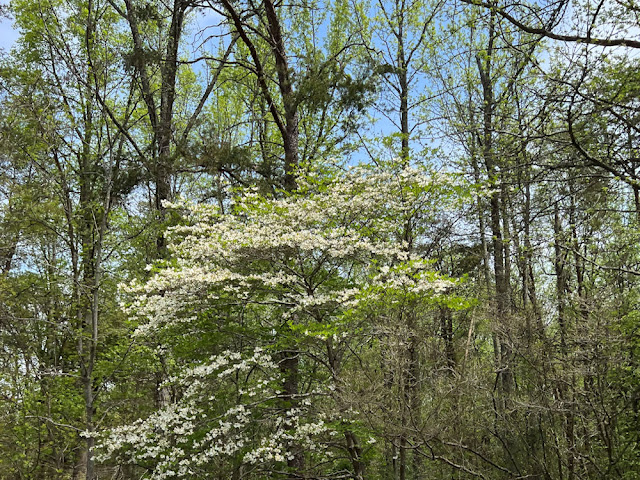 And so, we leave until our next visit.  I hope it is soon as I would love to see more of the babies, and maybe some Pileated Woodpecker chicks.  Fingers crossed! 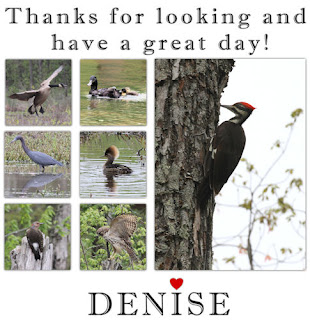