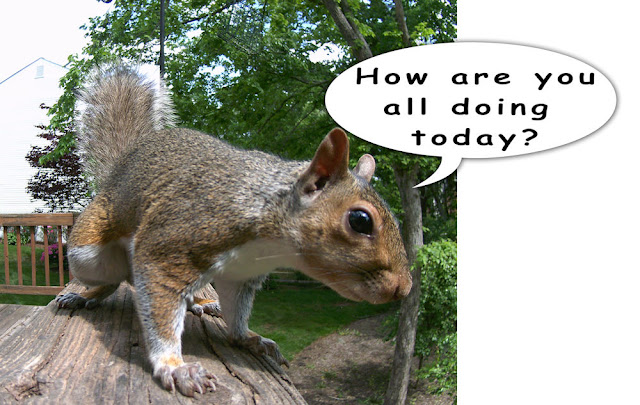 I am being my usual cheeky self and eating my way through all the birdseed, though the starlings are giving me a run for my money.  There aren't as many grackles as there used to be though.  I am thankful for small mercies!

Mrs. doesn't mind as she knows I have babies to feed.  There are young ones coming around now.  They haven't quite figured out how to jump up to the hanging feeder yet.  They are still very small.  I am not going to teach them until they get a bit bigger and stronger.

When that happens you will be hearing the laughter coming from inside.  Mr. and Mrs. love our antics.  I hear them saying that all the time, especially when we slide from the top to the bottom of the pole like it is greased.  I did that the other day but that didn't stop me.  If you don't succeed the first time as the old saying goes.  I took a running jump, grabbed onto the basket, swung on the end like a trapeze artist (I looked marvelous though I say it myself), triple-flipped over and somersaulted to the rail as I tipped all the seed on the ground.  Easier to get to that way, and the other birds like it too as it scatters everywhere and is easier for them to eat off the ground.  I am practicing kindness in helping my fellow birdseed eaters.  I didn't mind Mrs. laughing at me.  Just keep putting the birdseed out here I say and keep me fed, and they do.

As nice as they are, they gave me a fright the other day.  I looked inside the house and saw big eyes staring at me.  I thought it was an owl!  Mrs. said not to worry as now they both have what she calls binoculars, to try and identify the birds they haven't seen before.  They did look scary, at least the Mr. did! 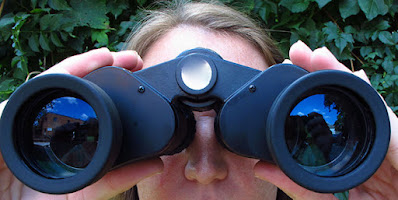 No, not that big for Mrs! 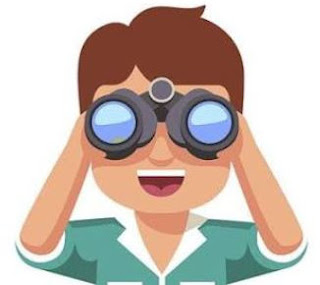 Not that big either, itsy bitsy ones that Mrs. can take with her to look for birds when they go to the park.  Well, you get the idea.  Mr. has a pair that is about as big as that first photo.  He bought them years ago before they got married and gets them out when Mrs. says she wishes she had a pair of binoculars, to which he always says, we already have a pair and gives her the old ones.  Mrs. again tells him she can't use them, they make her wrists ache.  Mr. knows she loves to look at us all out here, so he bought her a tiny pair last week.  She loves them and loves Mr. for being so thoughtful.  I am getting used to the big eyes (Mr.'s), now that I know it's not a big owl and Mrs. whose big eyes aren't quite as big.

I stayed away for a day as three big strong men came with saws and shovels.  They made a lot of noise trimming the trees and bushes around the house, and my family and I stayed up in our nest until they left.

Mrs. said they did a great job.  She and the Mr. need help in the garden and they were very happy that the men also planted flowers in the front of the house when asked.  It looks very nice but Mr. came inside a few hours later and told Mrs. that squirrels had already been digging in the mulch to get at their buried acorns...it wasn't me I told her.  Mrs. wasn't too happy but she just rolled her eyes and shook her head, and smiled.  We have a lot of acorns buried around here, but I won't tell her about mine.  Mr. was happy they didn't have to water the plants as it rained last night and our little holes were gone this morning.  It all looked nice and smooth, just like the day before.  Mr. and Mrs. were happy their plants looked better for the extra rain.  And it's raining again right now, and will be for the rest of the week off and on.

I have been a chatty little thing today haven't I?  I'd better go now.  I hear my babies calling for me.  Take good care of yourselves out there, and don't be swinging on any birdfeeders like a trapeze artist, unless you are a trapeze artist!