ALASKA TRIP - MAY 2018 - STARTING OUR CRUISE IN VANCOUVER 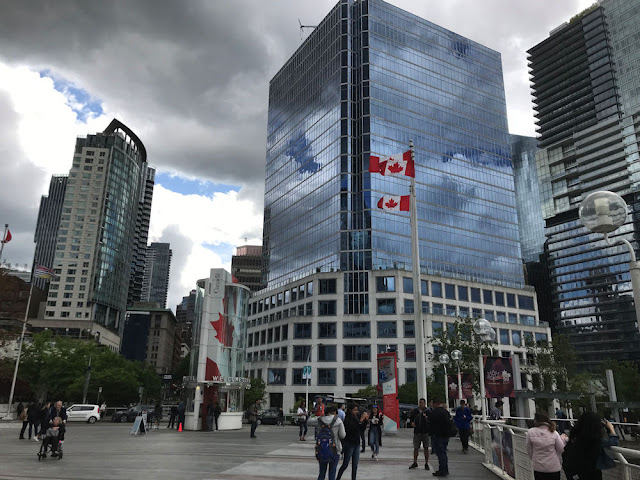 10.09 p.m.  We left the hotel this morning at 10-ish and drove down to the ship.  Gregg dropped us off while he took the car back to the rental company, and caught a taxi back. We were directed into a large hall where there was a long line forming - the first hurdle.  We had to fill out a health questionnaire which I did while waiting for Gregg to join us.  I sat down and called to tell him where we were, and our nephew went down to get him. 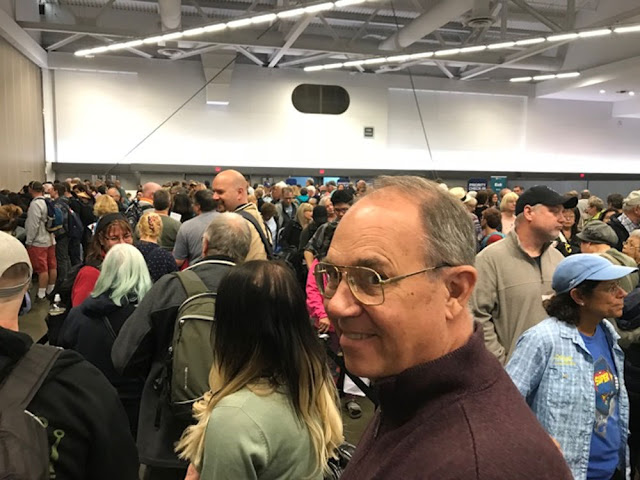 The four of us joined an even longer line and when it was our turn, two of the cruise staff took out a form with our name on it, checked it over and gave us the key to our cabin, which we also used to get back on the ship.  They took our photos and every time they swiped your key as you got back on board, your photo showed up with all details and they said, "Welcome back on board Denise."  But I digress, from the big hall we walked a long way to customs.  Our niece and nephew had to go through the international line, while we went through the US line.  Ours was a faster process and a very pleasant customs lady checked our passport and sent us on our way.  No photos here because you know, we're in customs.  He didn't need to but Gregg told me I couldn't take any photos...ho-hum!  Yes I am smiling, he knows me but my fear of being carted off transcends my compulsion to take photos, and I hope he smiles too when he reads this, because you know husband, I am a policeman's daughter, as you often remind me.  Smiling again!  A straight arrow and I could compete.  "You can't do that, it would be jumping the queue!"  "You can't do that it would be....".  I could name a lot of nit-pitty little things I wouldn't do.  Gregg has teased me for almost 43 years about being a policeman's daughter, all in the nicest possible way of course.

So, after not taking any photos, we walked another good distance, which ended in another big hall but thankfully there were chairs to sit down and we waited for our niece and nephew. As we entered one of the catering crew was handing everyone a paper cup filled with very welcome icy cold water, flavored with lime juice and cucumber.   Very refreshing and something I am going to replicate during the summer months back home.  Gregg's sister and her husband turned up next, and not long afterwards our niece and nephew. 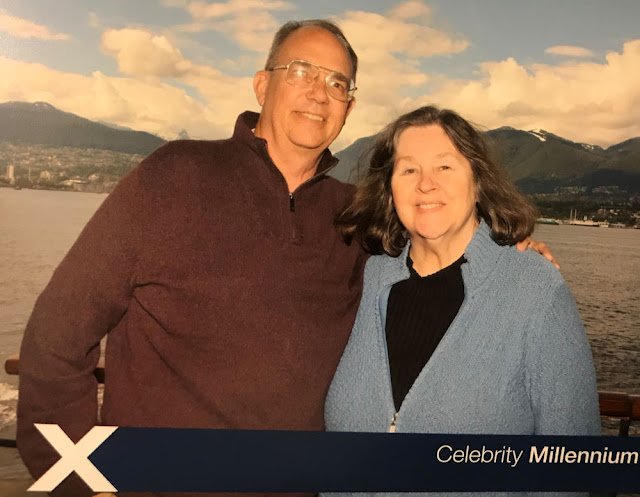 We all had our photos taken in front of a large  background which showed the ship.  At this point we hadn't set eyes on it.  First photo was of the two of us, and then all four.  We were asked to put our thumbs up.   Niece and nephew had one of just the two of them taken also.  Many stood in line to have their photos taken, and this was before we boarded.  I wondered if those who did not, had been on other cruises.  We encountered several people in the days ahead who told us all about their previous experiences. 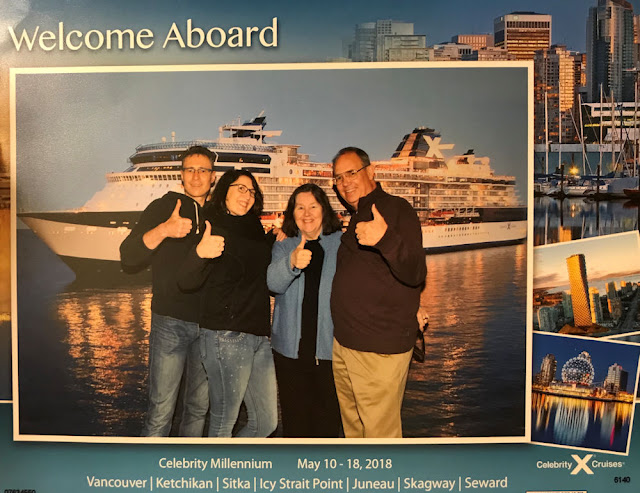 Finally it was time to go on board and we were greeted with waiters holding mimosas and champagne in fluted glasses. Then we were directed to the dining area and the six of us sat down for a meal. Our other family friend who was joining us, along with her sister, were spotted at the other end of the dining room, as they had gone through earlier. When they were leaving they passed by our table, and there were hugs all round.  We were all in a very good mood, and it was exciting.
After we had a lovely meal Gregg's sister and husband left and we were taken to our cabin. Happily we were next door to our niece and nephew. 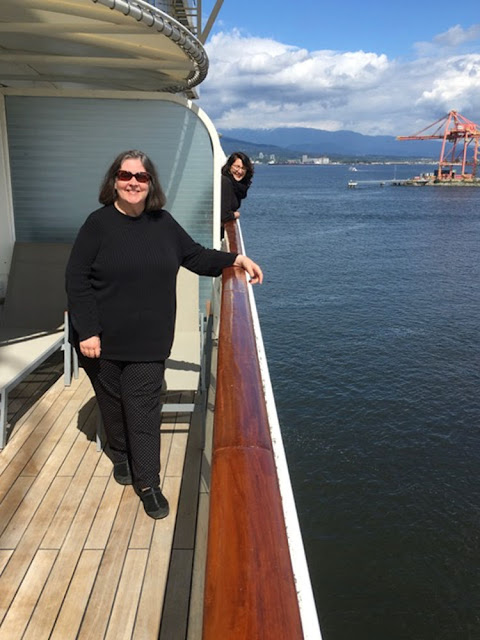 We stepped out onto the balcony and our niece popped her head around the partition screen from next door.  Sister-in-law also popped by and the three of us talked for a while. Gregg and I thanked her again as she was the organizer of this cruise, and set up the land tours also.  A cousin of theirs, who had been on the cruise the year before, also gave us some great information and we followed many of their activities, so we thank her too as she steered us - pardon the pun - in the right direction.  Thanks Cuz! 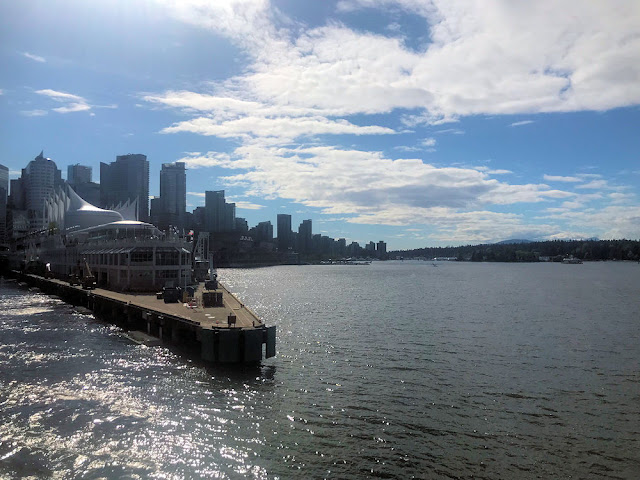 There was a compulsory safety talk upstairs before the ship put to sea.  It lasted about an hour and immediately after that we went outside and watched as we left port. 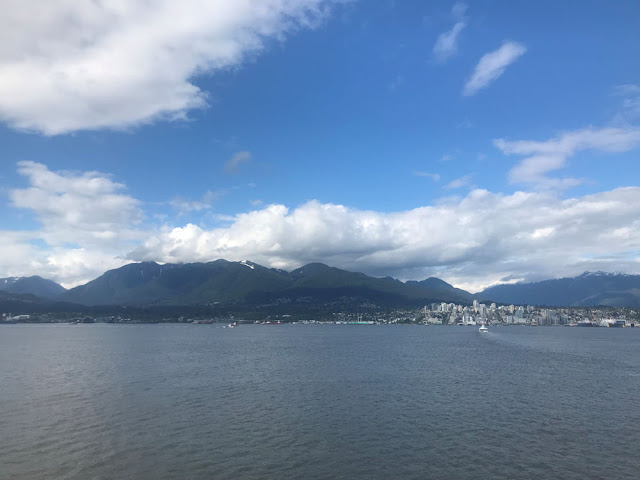 We thank you City of Vancouver and all the people we have met.  You made us feel so welcome during the short time we were in your city, and we fervently hope we can come back again one day. 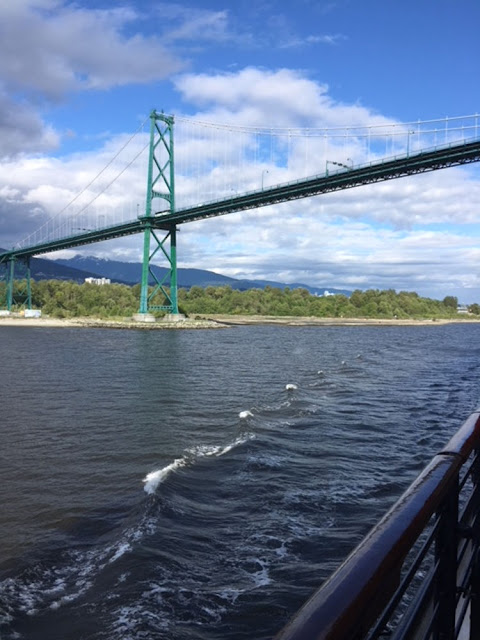 This cruise was a first time one (apart from the navy people in our family who had experienced putting out to sea years ago - Gregg - but obviously it was totally different, and he was just as caught up in the excitement as we were). We stayed outside long enough to sail under the suspension bridge. It reminded us all of the Golden Gate Bridge in San Francisco, except this was a grey color. 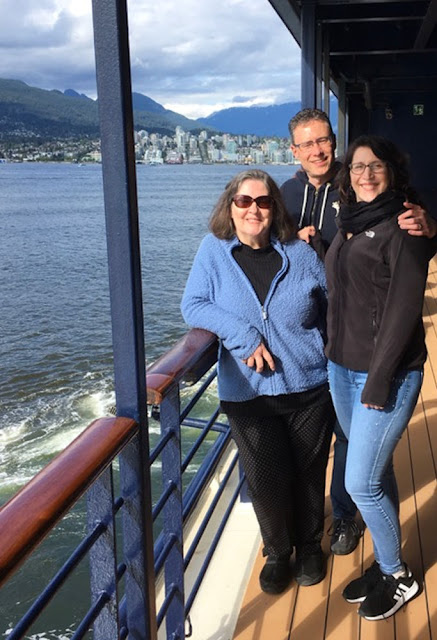 I expect we would have stayed out there much longer but it was a tad nippy, and we went inside and walked around for a while.  We then sat in one of the lounges, ordered drinks and listened to a very talented guitar player.  Next we went back to our cabin to check that out for a while and sit out on the balcony.  At 7.00 p.m. the doorbell rang and the four of us went two floors down to the dining room and met up with my sister-and-brother-in-law.  It was a fun conversation and we were all in a very good mood.

All the staff we encountered from start to finish could not have been more attentive. The manager who asked if everything was okay, told us about a special meal tomorrow and we arranged with him to attend.  We will meet the head chef and get a tour of the kitchen. Our friend and her sister came over as they were leaving.  We are playing catch up today but tomorrow they will be joining us for this special meal and tour. 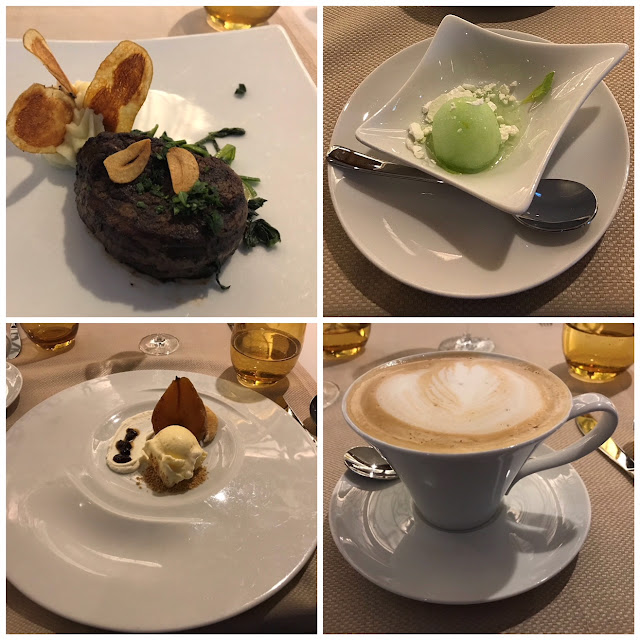 Dinner tonight  was super.  I apparently didn't take a photo of my tomato soup but it was excellent.  I also had filet mignon and for dessert, a poached pear and ice-cream.  Between each course a small serving of sherbet, very refreshing. Along with the dessert I ordered a white chocolate mocha, which came with one of those pretty designs in the layer of creamy foam on the top. With my meal I drank prosecco and also sparkling water.  We stayed talking a long time after my sister-and-brother-in-law left.  There was never any rushing you off the table at any time during our cruise, and that made for very relaxing meals. Eventually our beds were calling. Gregg and I went back to our cabin, and niece and nephew took another walk around the ship.

This has been an absolutely fabulous day.