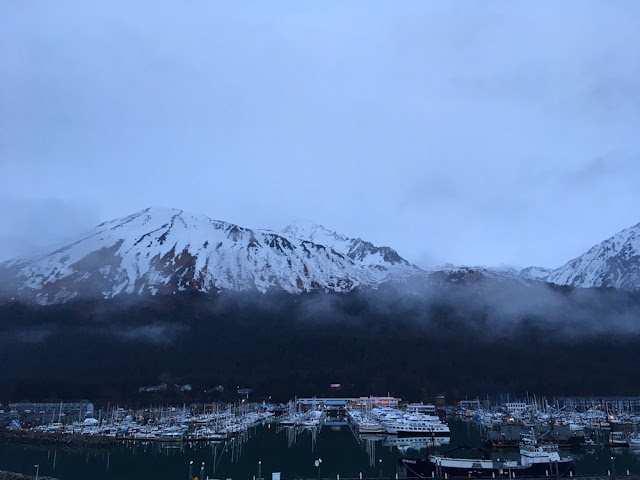 Wednesday, May 16th, 2018
Two hours ago I awoke to snow covered mountains and a beautiful harbor.  We are in Skagway.  The scenery is stunning! 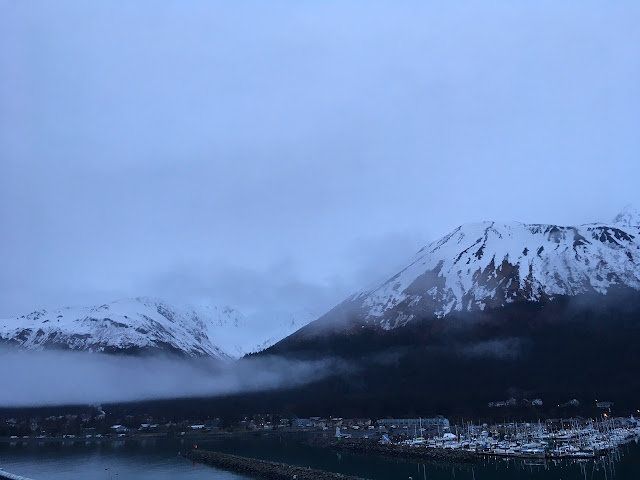 So, about our day.  We started very early and left the ship at 8.30 a.m.  Gregg's sister, who had organized this trip, arranged for a tour with a local company. 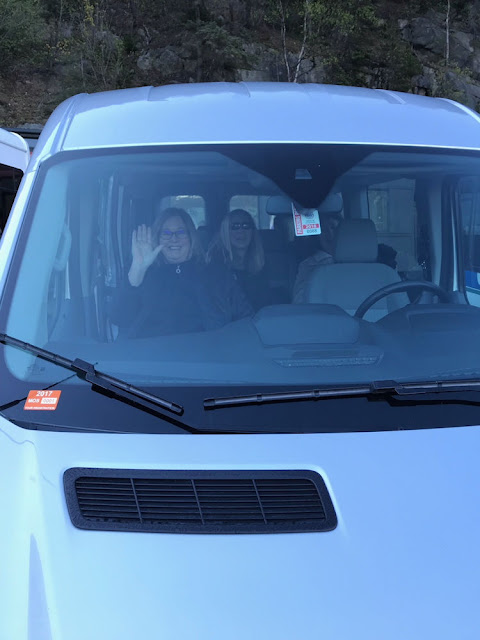 (From my niece and nephew's photos.)
Tim, our tour guide, picked us up in a van big enough for the eight of us.  He was great and gave us an excellent tour.  We had to bring our passports as we were going into Canada. 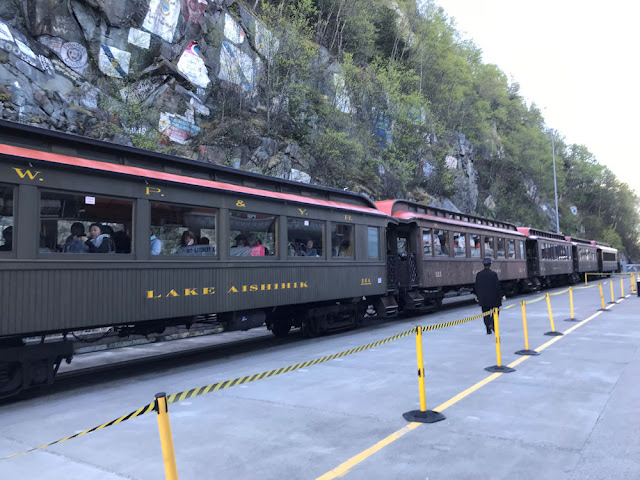 Many of the passengers off our ship were boarding a train right there next to the pier.  I found this link for that trip.  Looks like they went through some incredible scenery too, and ours was pretty incredible. 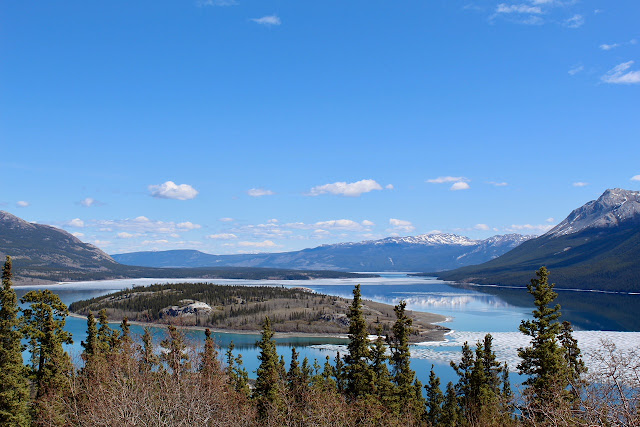 (This photo was given to me by my niece and nephew.)
Tim asked us if we would like to visit a kennel where dogs are raised to take part in the famous Iditarod Race.  You can read about the race here. 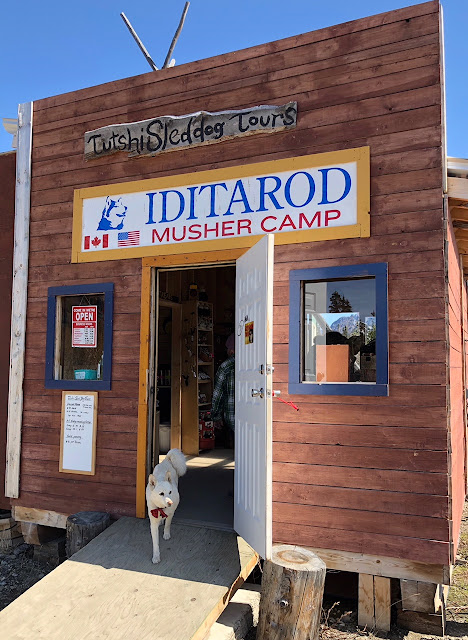 (Photo from my sister-in-law.)
We were very enthusiastic.  He took us to the Taglish Kennels, where we were privileged to meet the dogs and one litter of two-week old puppies, one sweet little puppy in particular. 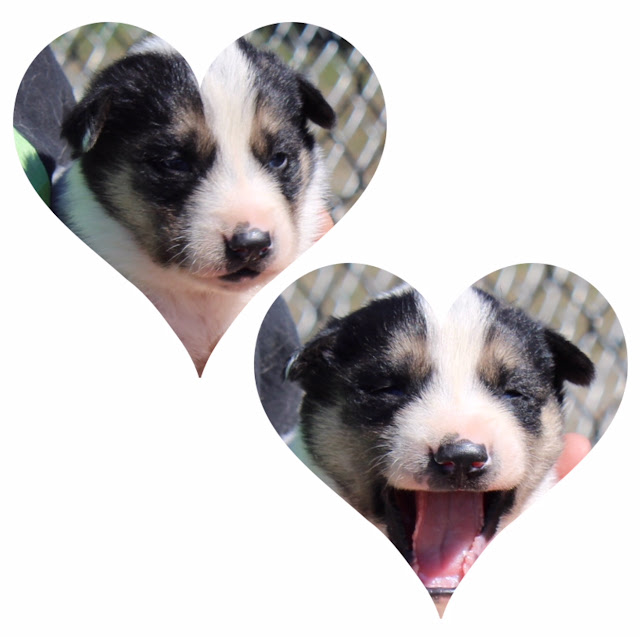 We were allowed to hold this cutie for a while.  Three of us had that privilege, my niece, nephew and myself. 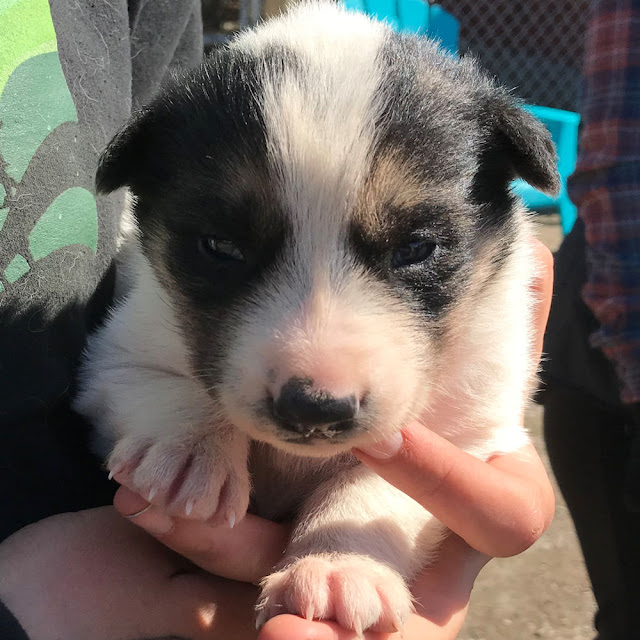 We all fell in love with the sweet little thing.  It was very hard to give him back!  Mom had her own dog pen that was secured from the rest of the curious dogs... 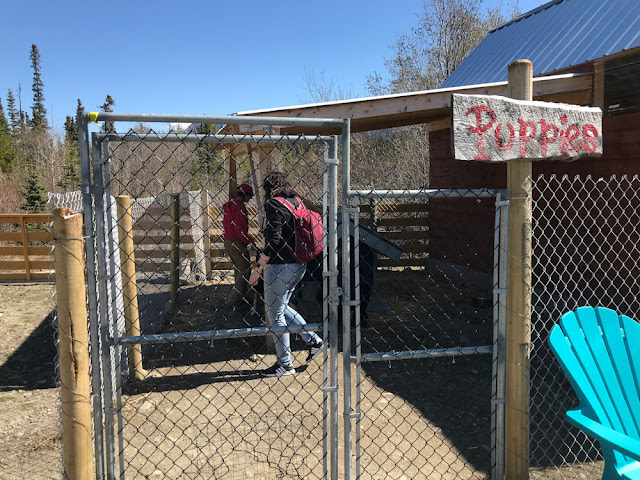 and her own very comfortable looking dog house... 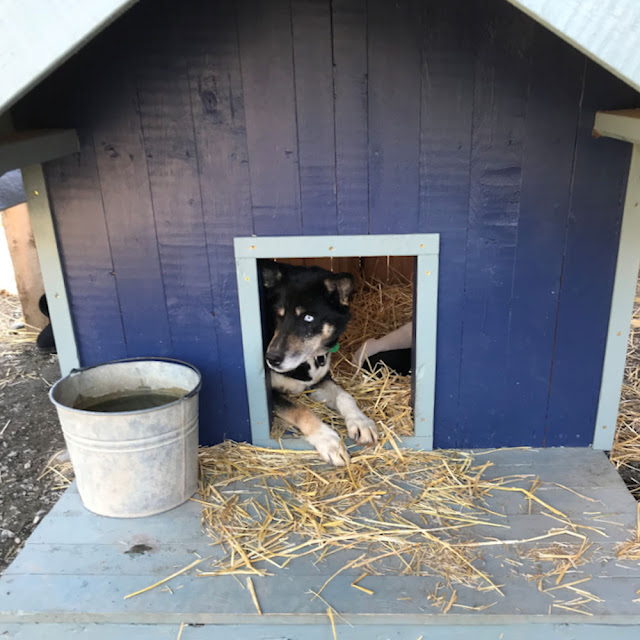 where we were able to see the other puppies.  The roof lifts on a hinge for easier access to the family, and comes in very useful when it's cleaning time I'm sure. 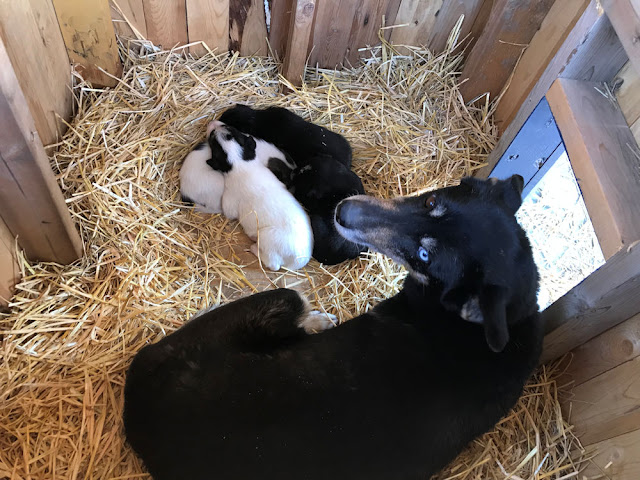 It was very interesting that another female dog was trying to get inside the pen.  We were asked if we would like to see the other puppies, and were allowed in two at a time.  The other dog's curiosity got the better of her and she was always trying to sneak in to take a look at the puppies.  We were asked not to let her in.  She meant no harm and she was very sweet, just curious.  However, mama dog, like any good mother, wanted to protect her babies. 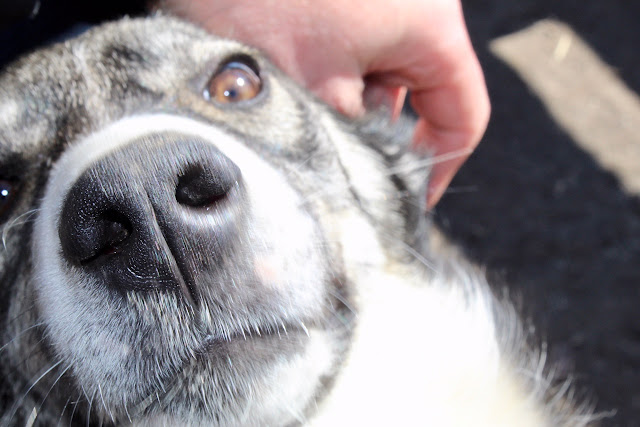 (Photo from niece and nephew.)
I noticed curious dog was trying to sneak in behind me.  Mama dog did not appreciate this, as she had growled loudly at her earlier. 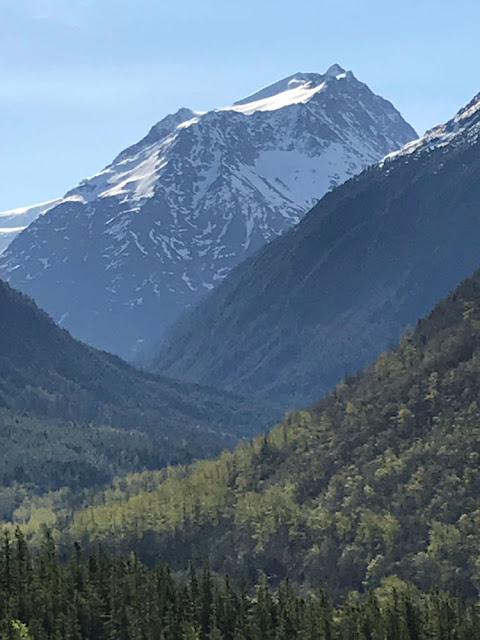 We went through the Canadian customs after showing our passports.  They couldn't have been nicer.  The same could be said of the U.S. customs on our return. 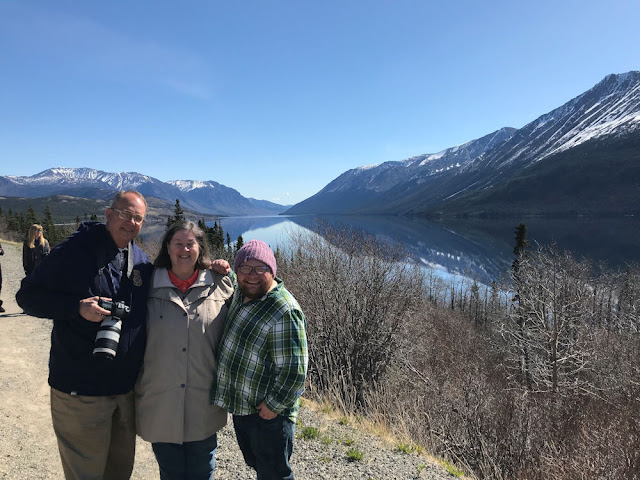 This is a photo with our tour guide Tim.  He was great and showed us a fantastic time. 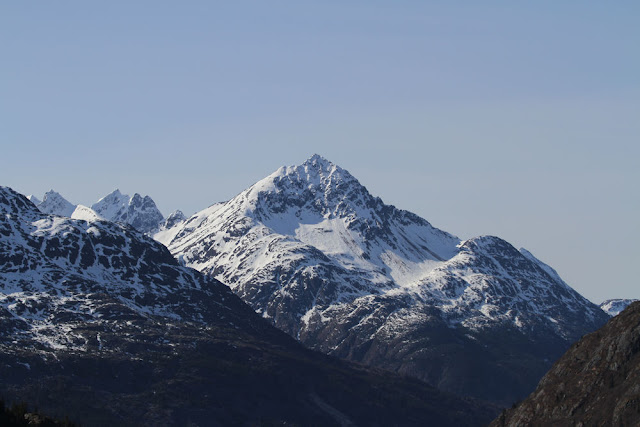 The scenery we saw was stunning.  There were reflections caught in clear lakes of 'glass'.  The mountains were perfectly mirrored, like an upside down world. 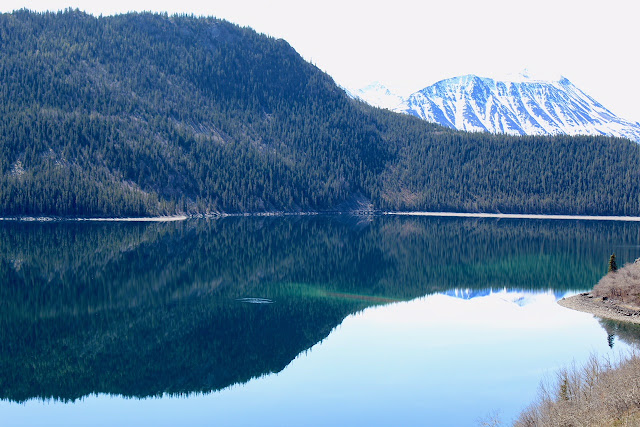 (From niece and nephew's collection.)
We stopped for lunch in a town called Carcross… 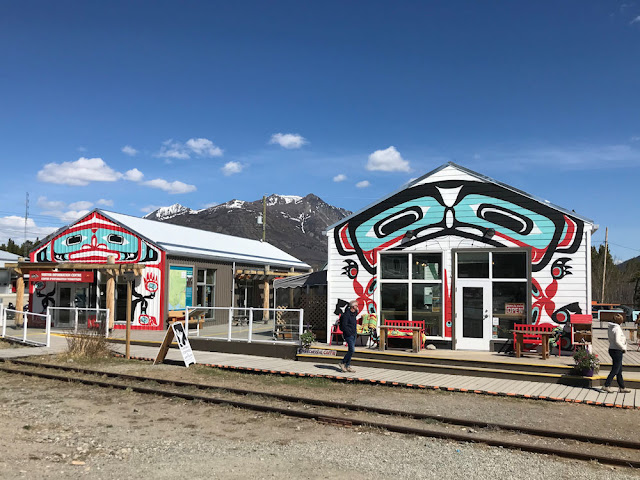 and all separated to find our own meal choices.  The place Gregg, niece, nephew and I chose had German music playing.  They went to investigate and found a German lady who worked in the small restaurant we had found for lunch.  They enjoyed meeting her and chatting before it was time for us to move on.  She had lived in Alaska for several years. 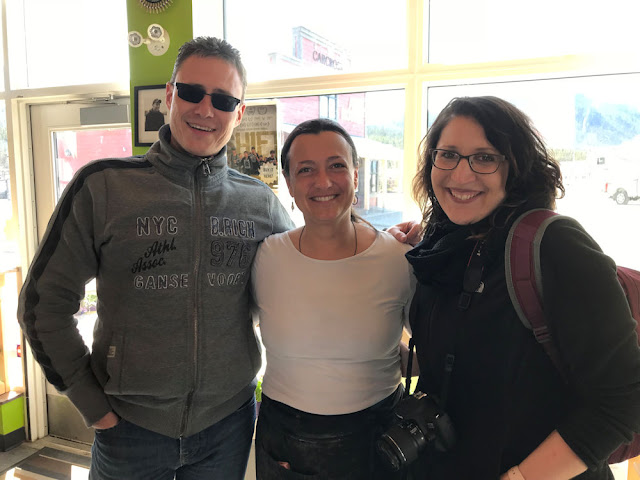 This was our turning point and Tim stopped off at several overlooks on the way back.  More stunning views, and I will need to do another post later to share all the photos taken. 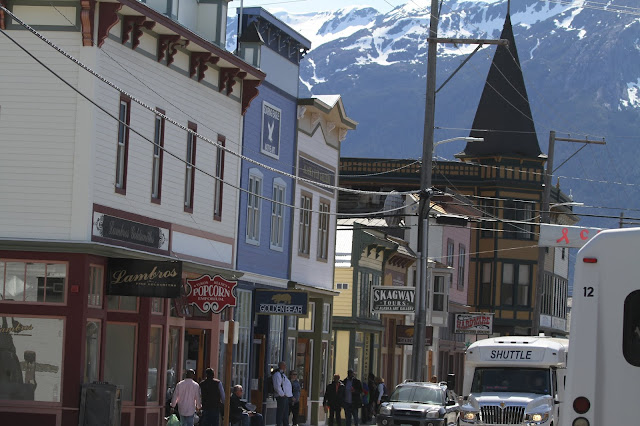 We eventually ended up in Skagway and enjoyed browsing.

Time to say goodbye to Tim and we thanked him enthusiastically for giving us such a great tour.  Thanks again Tim!

9.48 p.m. and we are back in our cabin after a marvelous dinner on board, all eight of us.  It was another super meal. 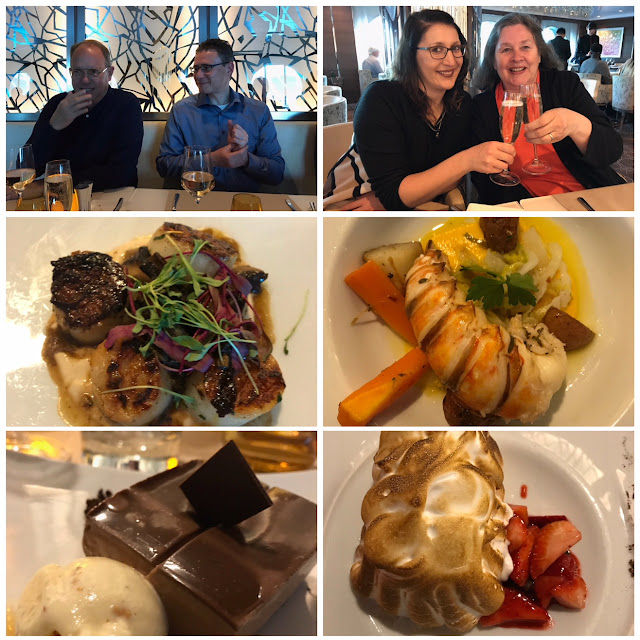 (I put my niece and nephew's photos into a collage.  Not all the dishes are shown but there were no more photos taken of this meal as far as I can see.)
Sleep calls!