4.29 p.m. and we are back in our room after having another fun day.  We started our day by going for breakfast at a restaurant not too far from the hotel. 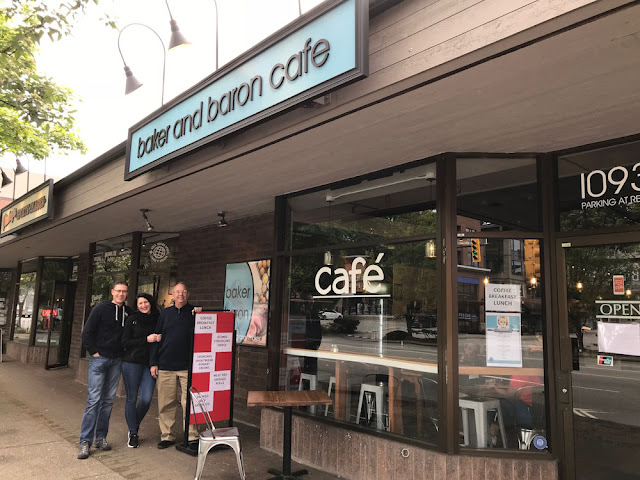 It was a great place.  The owners were originally from Zimbabwe, had lived in South Africa for many years, and then moved to Canada. 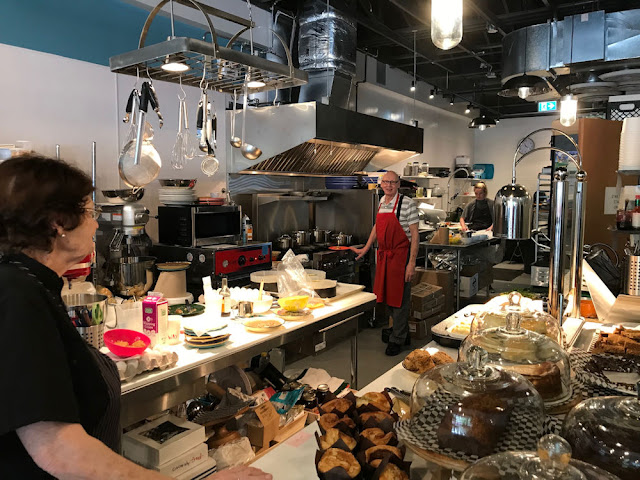 They decided to open this restaurant only a year ago and have just celebrated their first anniversary.  They were lovely people and we chatted during our stay. 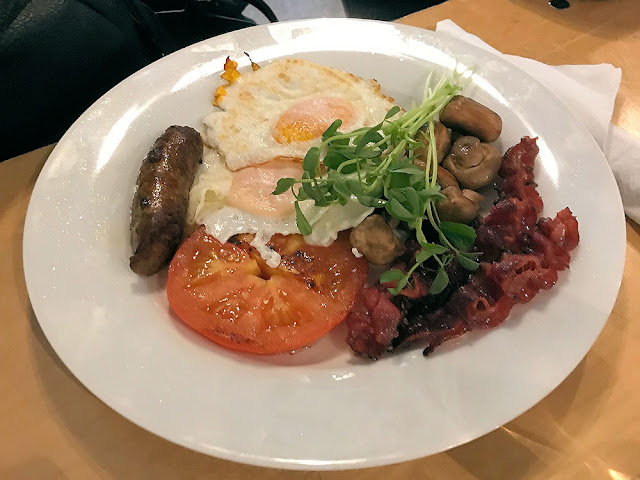 Everyone ordered the same basic breakfast, bacon and eggs, sausage or bacon, mushrooms, a slice of tomato and toast, but there was a lot more on the menu to choose from.  Wish I could have tried the crepes but this was a one time stop as we would soon be leaving town. 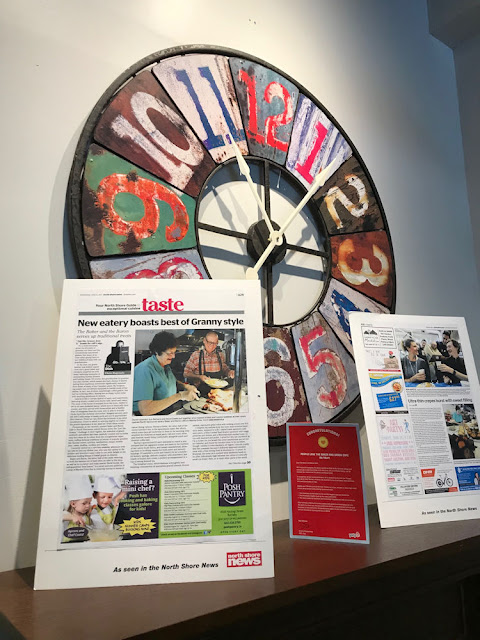 I can highly recommend it if you are in the area.  It is not a fast food place.  I have nothing against fast food but it was a lovely change going into a mom and pop restaurant. 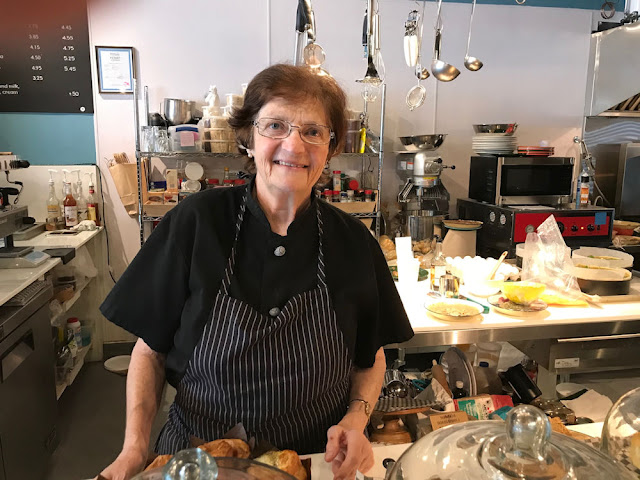 Loved the artwork on the walls. 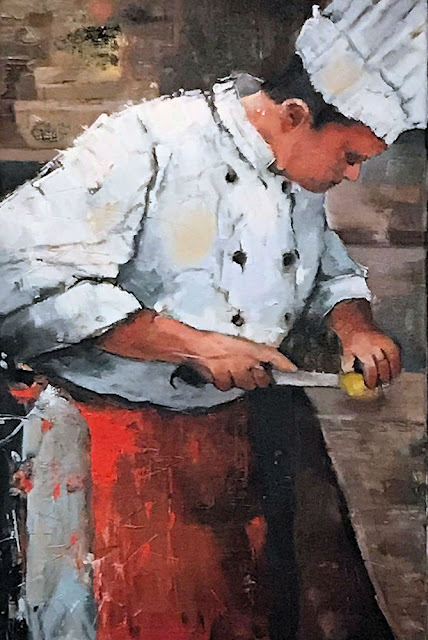 You can find Barbara and Dave's (the owners) website here.  Its address is 1093 Marine Drive, North Vancouver, BC V7P 3M6.  And no, they had no idea I was going to give them a review on my blog, and there were no freebies.  I just like to give a shout-out to those places we enjoy.  Great stop!

From here we drove to Grouse Mountain.

Our plan today was to take a gondola ride to the top, though I understand intrepid hikers walk up and walk down.  Grouse Mountain is only about 15 minutes from downtown Vancouver. 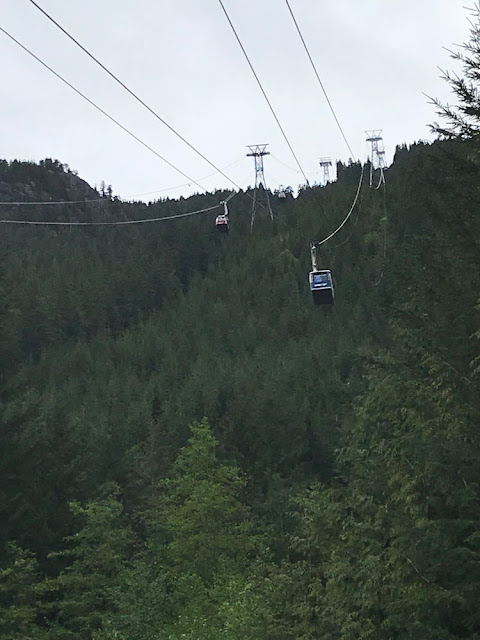 You can read its history if you click on the lettering in red above.  In short, how it got its name was from the time the first recorded hikers reached its summit in October 1894. Back then it would have taken someone three or four days to reach the top. 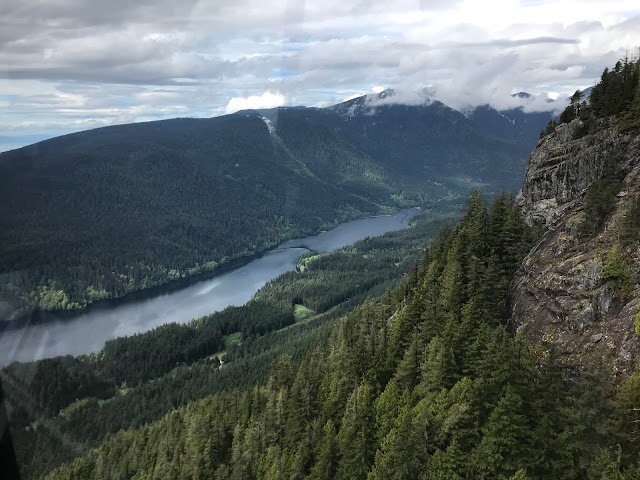 Along the way they hunted Blue Grouse.  There were many on the mountain, and that's how it got its name, Grouse Mountain.  In 1949 it had the world's first double chairlift. These little snippets came from the link above, and you can read their time line of history there also. 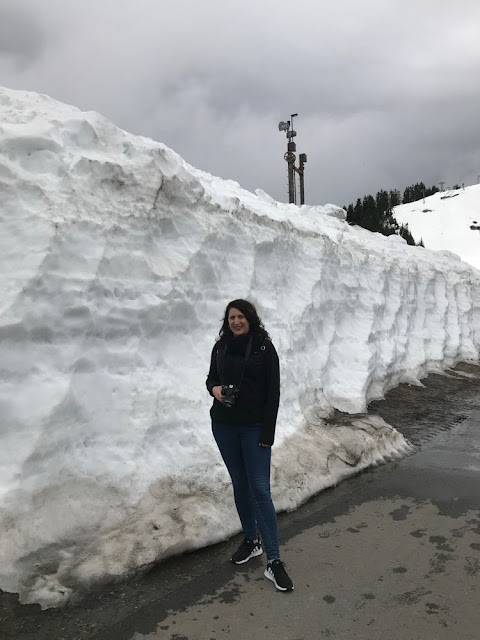 There was a lot of snow up there and it was very cold. It also rained briefly.  I should have worn a coat. It's been a long time since I have been in high mountains and though I had one back in the car, it wasn't helping me up here.  Lesson learned and a good reminder, when the temperature is milder down below, high in the mountains it can get decidedly nippy! 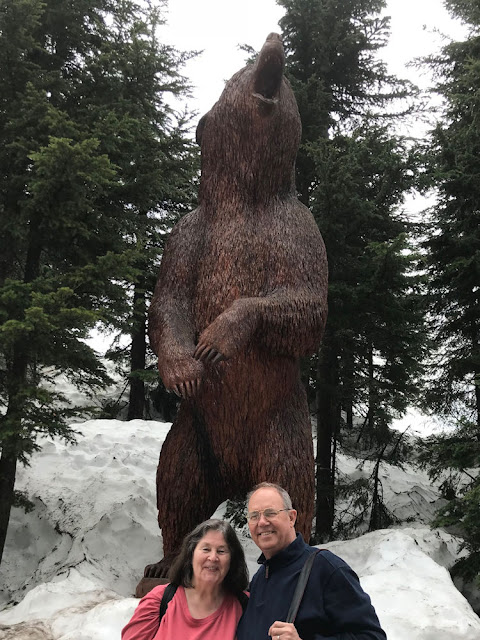 There were several impressive carvings along our walk, and all very large.  The two here were way over our heads, as were others we passed. 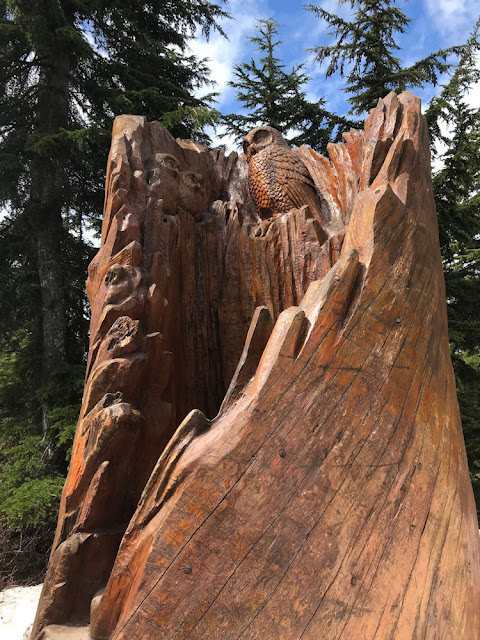 There was a café, gift shop and something that interested us particularly, a grizzly bear enclosure.  We knew we were on the right path when we saw the paw prints, although I think this photo was taken when we were heading back, judging by the direction of those prints. 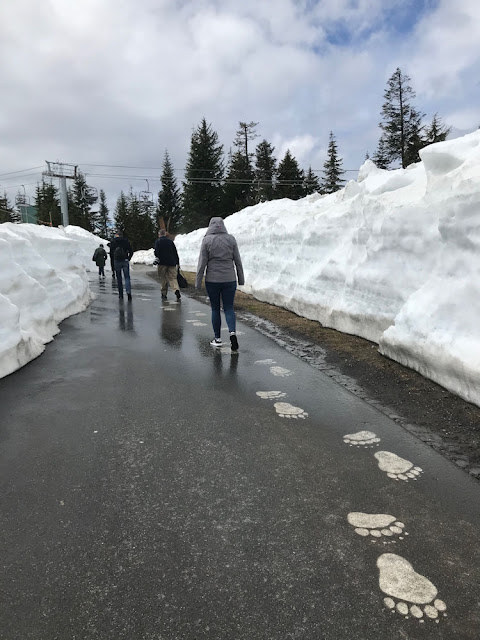 The two we saw were sleepy, having just come out of their 17th hibernation.  In fact one popped his head up briefly and gave us an enormous yawn... 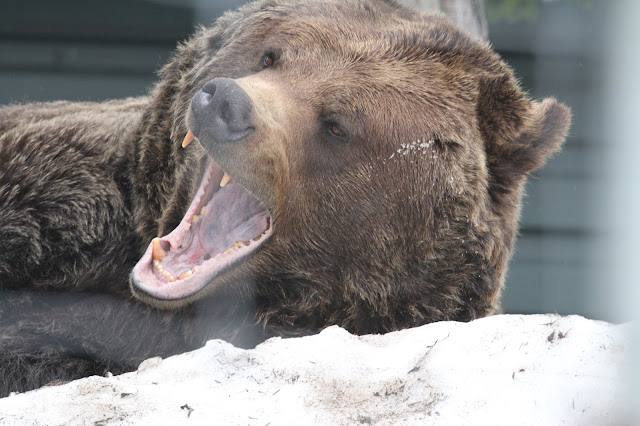 and look at those pads and claws? 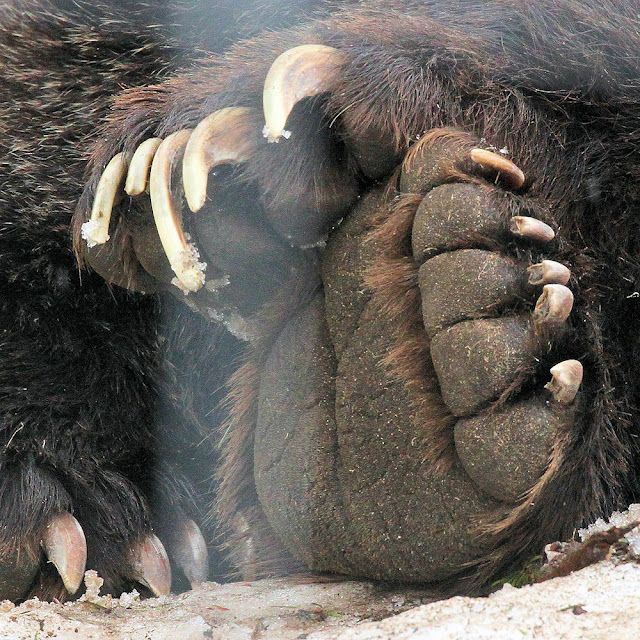 This enclosure apparently is temporary as their much larger home was being updated next door.  I couldn't help but feel sorry for them, not being able to roam free but their stories tell why that isn't possible. 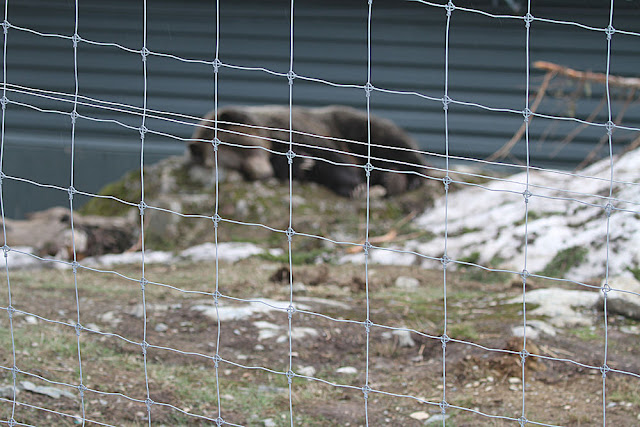 Grinder was found in 2001 in Invermere, BC, wandering alone on a logging road, weak with dehydrations and very, thin, weighing not even 10 lbs.  His mother was never found, so he lives his life here at the top of Grouse Mountain. 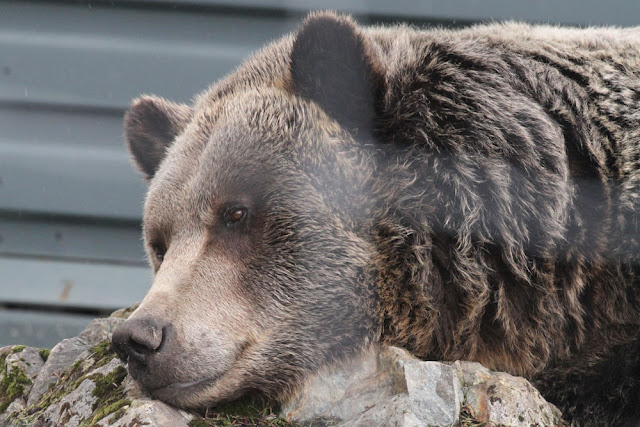 The same year Coola was found on a highway near Bella Coola, B.C.  His mother had been killed by a truck and of her three cubs, Coola, was the only one to survive.  Apparently he enjoys letting Grinder take the lead and can often be found submerged up to his neck in the large pond.  You can read about the bears here. 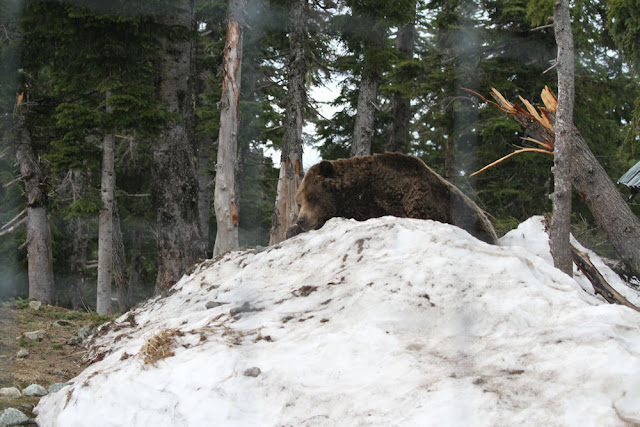 We were only on the mountain for a couple of hours, time to have a cup of coffee and a look around the gift shop after we visited with these beautiful bears.  On our way down we were packed like sardines inside the gondola. 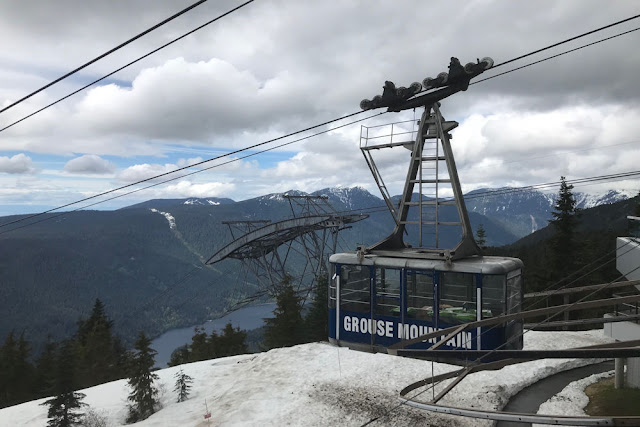 Wanting to find out where we needed to go the next day, Gregg took us to where we would be boarding the ship. We parked the car using one of those meters I mentioned before, when we visited Dr. Sun Yat-Sen's Garden a few days previously.  They can be found all over the city. 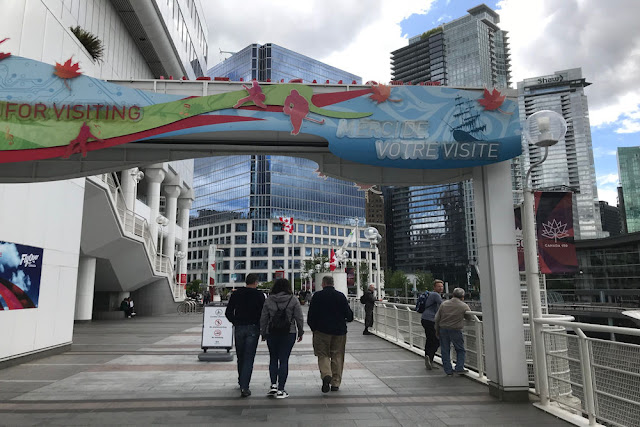 It was fun to walk around, and hard to believe we will be sailing tomorrow.  The one below is not ours, but one that had left by the time we got there the next day. 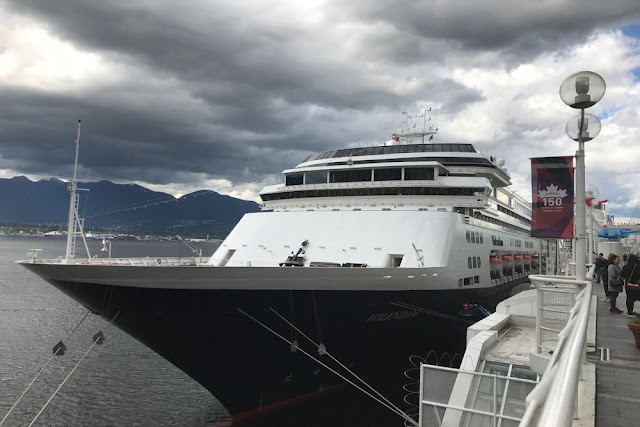 Our way back to the hotel Gregg took us through Chinatown, but there was no energy left to do more than drive through.  It was very interesting looking at all the store fronts. 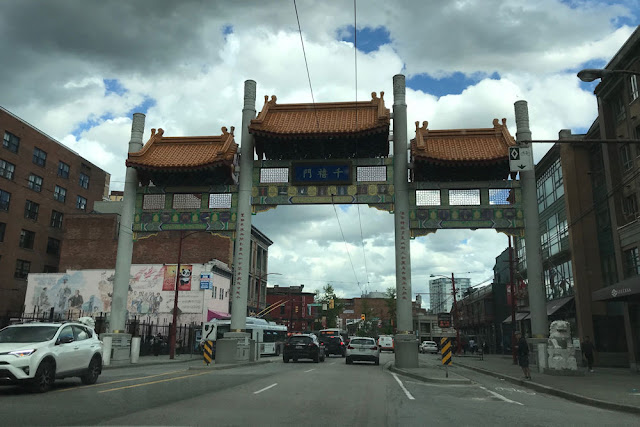 We returned to the hotel, had another nice meal with our niece and nephew, and then went to bed.  It's going to be a big day tomorrow.