We are home now.  This is my journal from the beginning of May. 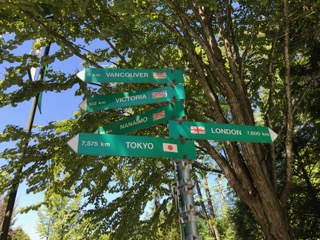 It is 7.31 a.m. and I have been awake a few hours. We are three hours behind here.  We are starting out slow but have been receiving and sending texts to our son.  He had been to New Orleans on a business trip and it had gone well.  He called us later and told us all about it.  I reminded him that the last time he was in New Orleans he was still in a push chair, about 17 months old.  We were traveling across country with my parents, and had taken them to the city as part of our sightseeing tour along the way. 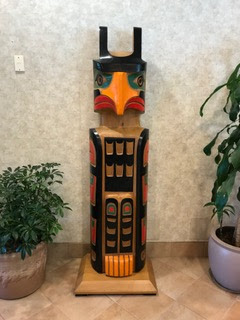 Gregg has gone out to get our suitcases from the car.  We had left them overnight in the trunk, not intending to do that.  (We were so tired last night and as I mentioned in my last post, we fell off to sleep for what we thought would be a short nap.) When he got back to the room he told me in the two trips to the car, he had five people wish him good morning, saying they were friendly and polite here, from the staff to other guests at the hotel. We are both glad we came a couple of days early, as it will give us a chance to look around before we pick our niece and nephew up from the airport.  My niece and her husband from Germany will be joining us on our vacation, and a few days after that we will also be meeting up with Gregg's sister and her husband, and also a good friend of ours, along with her sister.  This trip has been a year in the planning stage. 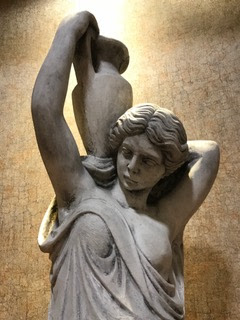 (This photo and the one above are from the hotel foyer.  The sign I found
in the parking lot)

We went downstairs and had breakfast. The restaurant was called The Pantry and it was inside the hotel. There is also the addition of a small bar. 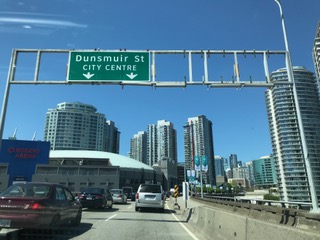 This morning Gregg found three gardens to go to and we chose one called the Dr. Sun Yat-Sen Chinese Garden. He was to China what George Washington was to America, and this garden was built to honor him. (Dr. Sun Yat-Sen led the revolution that ended the last Imperial Dynasty.) 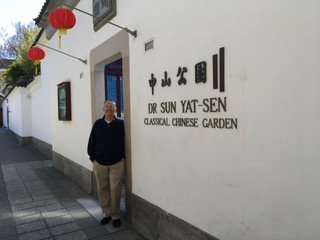 We stayed there for almost two hours. It was small but exquisite, well worth a visit, located in Chinatown. 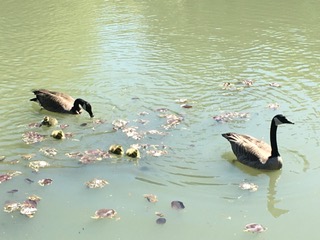 There was a Canada Goose family in the pond, along with four young mallards. 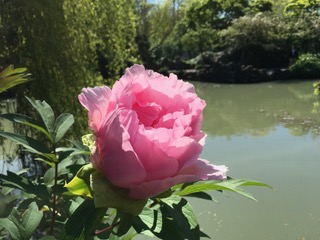 One of the caretakers asked us if he could answer any of our questions. We didn't have any but did let him know how much we were enjoying the garden, and all its beautiful flowers. It started getting busy as we left so we came at a great time. 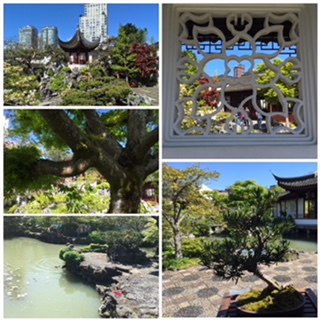 I thought the stonework was so pretty... 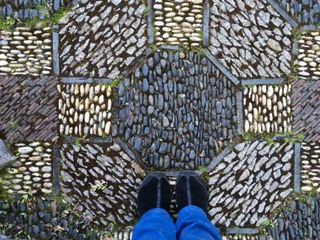 as were other architectural features... 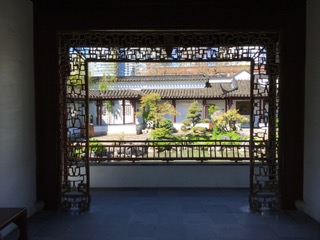 including this moon gate. 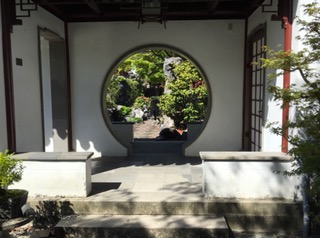 I found the following information here.

"A Moon Gate is a circular opening in a garden wall that acts as a pedestrian passageway, and a traditional architectural element in Chinese Gardens.  Moon Gates have many different spiritual meanings for every piece of tile on the gate and on the shape of it.  The sloping roofs of the gate represent the half moon of the Chinese Summers and the tips of the tiles of the roof have talismans on the ends of them.  Chinese Gardens are often used as a display of class and beauty in many different Western Cultures.  The purpose of these gates is to serve as a very inviting entrance into gardens of the rich upper class in China.  The gates were originally only found in the gardens of wealthy Chinese nobles." 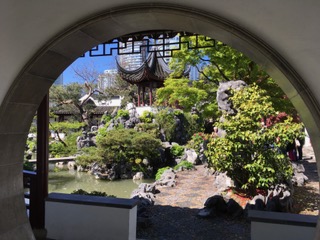 I will share other posts from the garden at a future date. 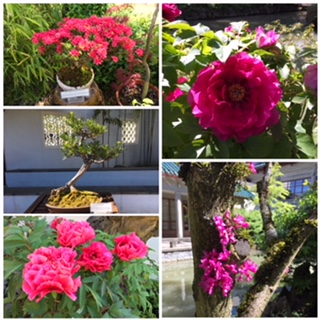 We have another cool app Gregg downloaded for this trip. Apparently we have something similar in DC. The garden had no parking lot but several metered spots on the street. We found one around the corner. You download the app and instead of putting coins into the meter, which we didn’t have, you type into your app the number on the meter and the duration of your parking time, having already included our credit card number when downloading the app. It is all done by cellular data and the meter person, when they arrive, takes a picture of your license plate, and that tells them if you paid and how much time you have left. That way they didn’t have to digitalize all the meters. Ten minutes before your time runs out you get a text message with the opportunity of extending your time. Gregg used a phone number shown to get the rental car license plate in the system. Someone answered immediately and did what we needed. He could not have been more helpful. This is a very clever, low cost solution. 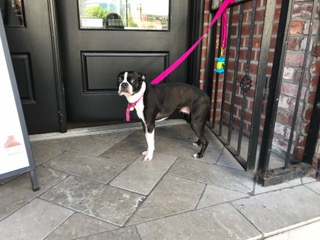 We didn’t want lunch after our substantial breakfast, but decided to get an ice cream cone. I looked on Yelp and picked the closest one to us which was called Earnest Ice Cream on Fraser Street. Around the corner where we had parked the car there was a juice place.  Inside its doorway  there was a little Boston Terrier.  I didn't notice that that the poor little guy was trembling like a leaf.  The door was left open so his owner could keep an eye on him, but in the shade it was a bit cold and there was a lot of traffic noise.  Then some strange woman turns up and starts cooing at him and taking his picture.  Go away lady and take your camera with you!  I did and when we returned to the car he was gone.  Such a cute little guy and the first of what I call my doggy-fix photos of the trip. 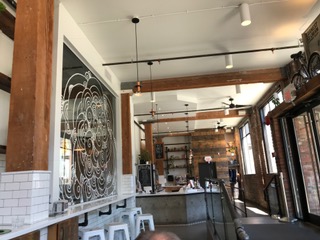 Anyhow, the ice cream place was a lot of fun. I chose a scoop of salty caramel. Gregg’s choice was strawberry cheesecake. The seating was one large round table or you could sit around the walls and window on high stools. Gregg didn’t want me to try climbing up any of the high stools (I have a reputation with those things too), so he asked a young man sitting at the round table if we could join him. I was already heading for that high stool but I thanked him, and joked that me getting up on one of those things could be quite entertaining. He laughed and started talking to us. 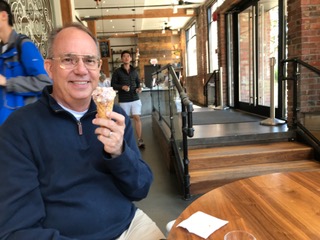 We had a lovely time with them. When asked if we could take a photo they happily agreed.  Before I knew it they got up and posed behind me. (I wouldn’t have asked but yesterday I regretted not getting one of our young friend from Brazil, so took the initiative.) They said sure and they both got out of their seats and stood behind me while Gregg took our photo. 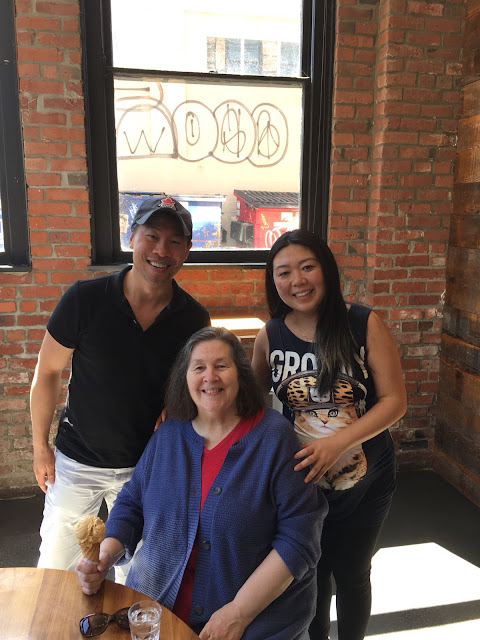 At first the young man took his cap off and said he couldn’t pose without it, showing me his forehead complete with a huge square bandaid. Startled I said oh no, I am so sorry you hurt yourself and he laughed again and said, me too. That was quite a bump he had and we could see the large bruise. Looked like several stitches too. A lovely couple and before they left, the young man told us to come back and try the whiskey and hazelnut ice-cream. He had already told us in his opinion this was the best ice cream store in Vancouver, that whiskey flavored ice-cream might sound a little strange, but it was his favorite and he didn't even drink whisky. An utterly charming couple, I told Gregg I warmed to them immediately. Gregg said he was surprised I didn’t invite them to come visit us in Virginia. I did that once years ago and he has teased me about it ever since.  Maybe if we had had a longer conversation I said, wink, wink. 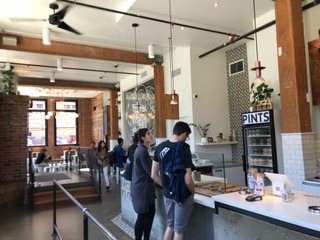 On the way back to the hotel we took a different route with very pretty greenery on both sides. There are snow capped mountains in the distance. Whistler is two hours away. It is a very popular skiing area. 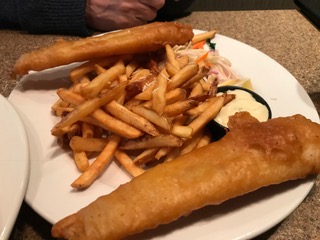 After a couple of hours rest in our room we went down and ordered a Caesar Salad and Fish and Chips at the Pantry Restaurant. (We swapped plates half way through.) 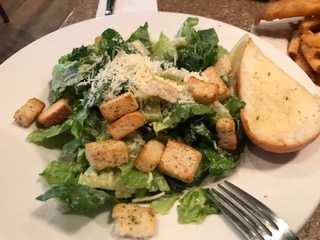 For a beverage we ordered a deliciously refreshing beer from a local brewery.  If you enjoy beer and find yourself in the area, I can highly recommend the Granville Island Honey Lager. 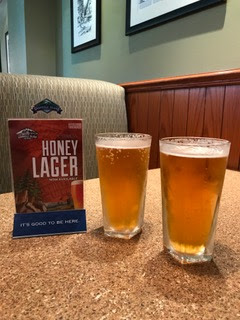 We came straight back to the room and are having another early night.  We reminded ourselves that we are still on East Coast time and it is 10.51 p.m. back in Virginia. Usually we don’t even bother trying to get used to the time change. When we are tired we rest. Our inner clock seems to catch up eventally.

Posted by DeniseinVA at 9:12 PM