A WALK NEAR THE OLD STONE HOUSE IN MANASSAS 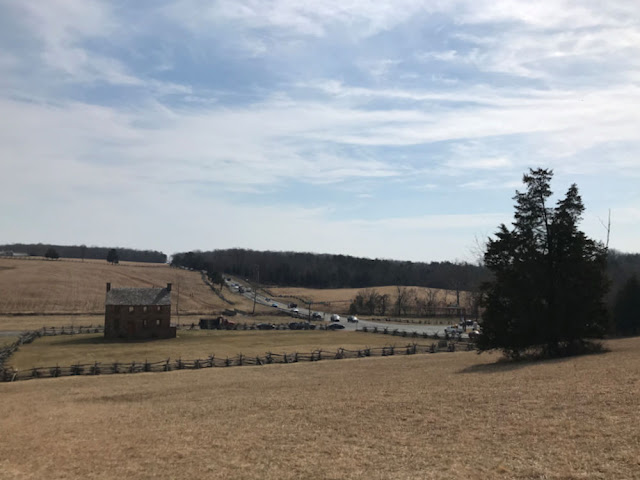 On Monday of last week (March 8th), it was a surprisingly warm day and the weather was perfect for walking (70 plus degrees).  Lately we always head for the Manassas Battlefield Park.  There aren't that many people around on a week day, and though we saw a couple here, a family there, with their dogs, they were well away from us and we were in our comfort zone.  Normally we would head for one of the gardens but that will have to wait for a while.  We are very happy with our decision to use the battlefield for our walking grounds, for the time being. 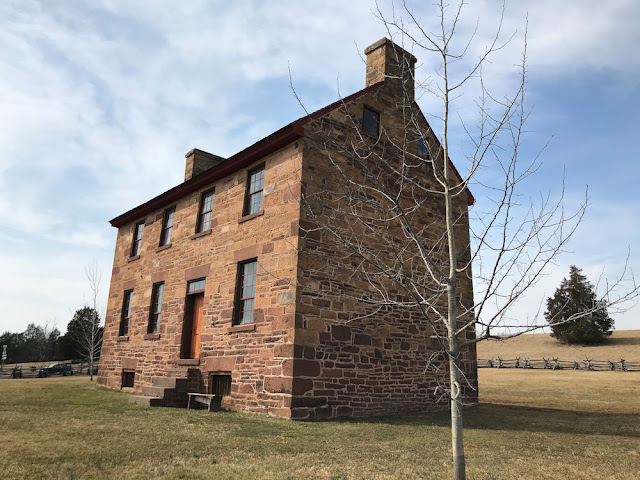 The Old Stone House as it is called, is a very well known local landmark.  It was originally built in 1848 and was used as various taverns, private businesses, a hospital and a private home. One of its owners was Henry P. Matthew, a farmer who harvested the fields surrounding the house. 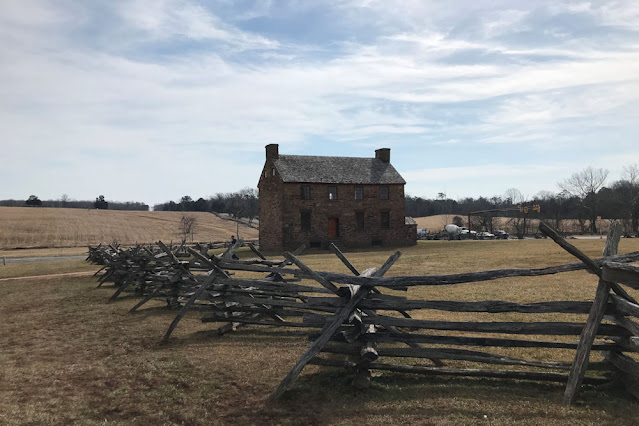 It is a two-story building with a basement.  The left side of the basement was the kitchen area, while the right side of the basement was used for storage.  Directly above the kitchen on the first floor, was a large bar area, where travelers involved with the wagon trade and were not known for their gentile dispositions, could imbibe to their heart's content.  I would imagine the place got very rowdy at times.  Across from the bar on the first floor there was a dining room and a sitting room, located above the basement storage area.  The second floor had a large master bedchamber and two smaller bedchambers.  Its chimneys and walls are original, as is a lot of the flooring that was there in the 1860's and earlier.  Various people who owned it over the years renovated the inside of the building to suit their needs. 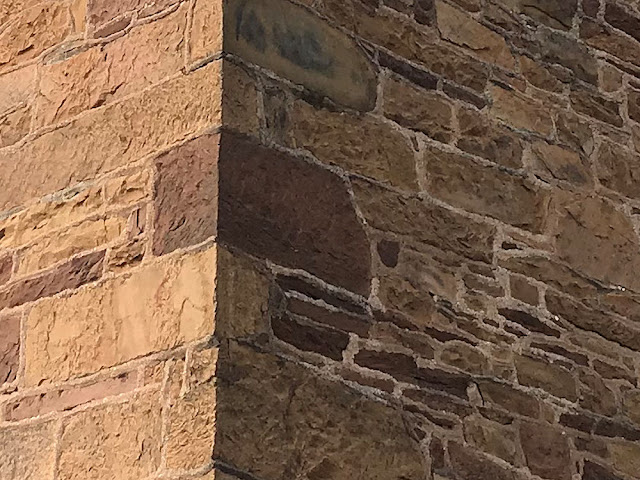 However, it served as a hospital during the First and Second Battles of Manassas during the Civil War.  It survived, according to the memoirs of Confederate General Jubal Early, from shot and shell during both battles. 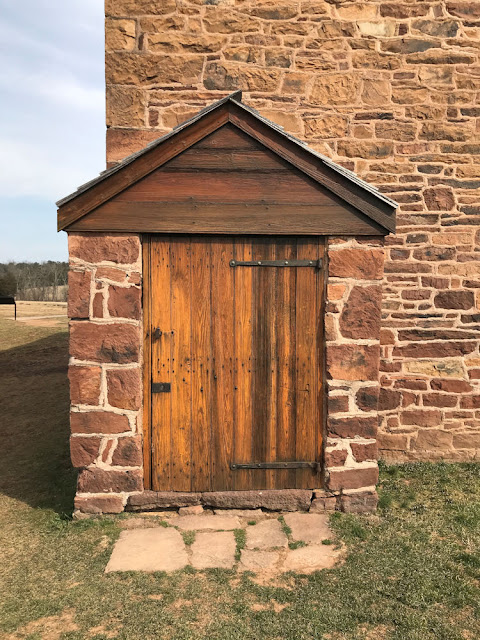 It all changed in 1861 when fighting broke out so close to the house that it was peppered with shot and shell throughout the First Battle of Manassas on July 21st.  With its strong stone walls, a well in the yard and close proximity to the road back to Washington DC, it was the ideal site for treating the wounded.  For the history buffs, many of you will know the story, but for those of you who don't you can go to this link for more information. 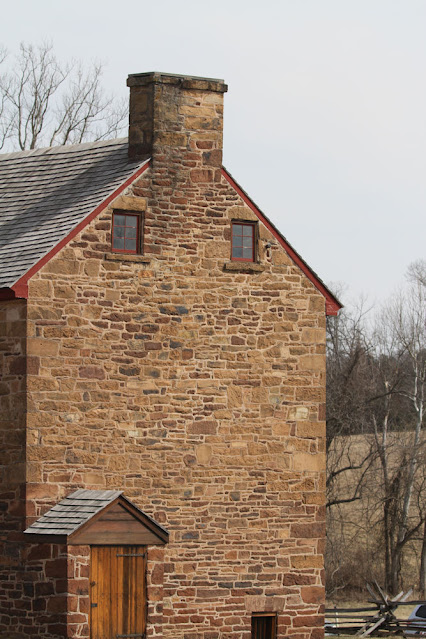 I am married to one of those history buffs, and I get a refresher course every time we come here.  I am always grateful to learn as have always been curious about such things.  I feel fortunate that I have my own historian in the house, and I always tell him he would have made a great history teacher. 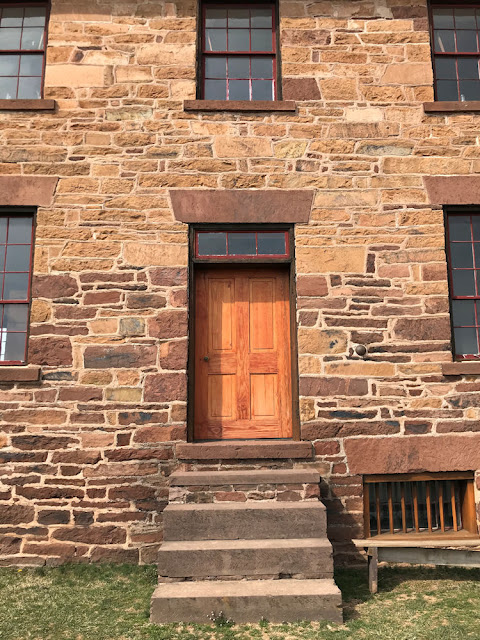 The cannonball in the wall, also seen above on the right wall paralleled roughly half way down the front door of the house, wasn't put there by the firing of a cannon, rather that it was inserted years later to generate tourist traffic.  When the National Park Service acquired the property, it had been present for so long that they didn't remove it for fear of damaging a historic feature, and so it remained. 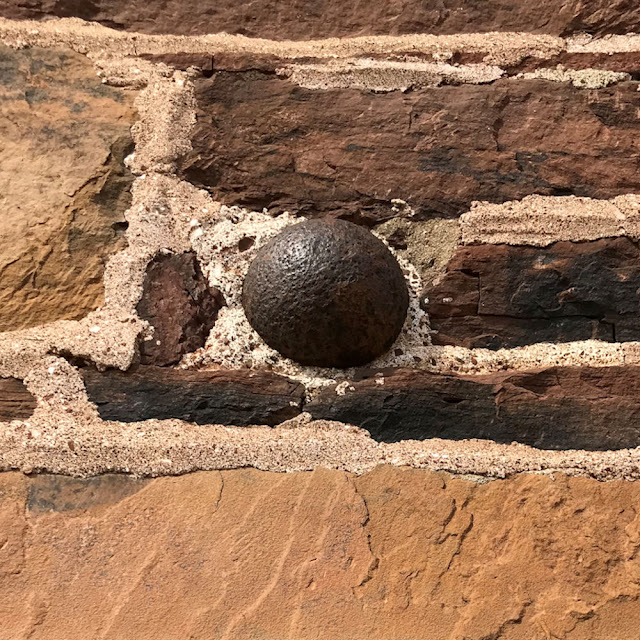 During the Second Battle of Manassas, two wounded Union soldiers, Eugene P. Geer and Charles Brehm, both of the 5th New York Infantry, found their way into one of the upstairs rooms of the Stone House.  They carved their names into the floorboards.  Brehm survived but Geer sadly passed away from his wounds.  He was 17 years old.  Their carved names can still be seen in the floorboards, and some have even said that it is haunted by the younger man's ghost. Supposedly he has been seen looking out of the second floor window. 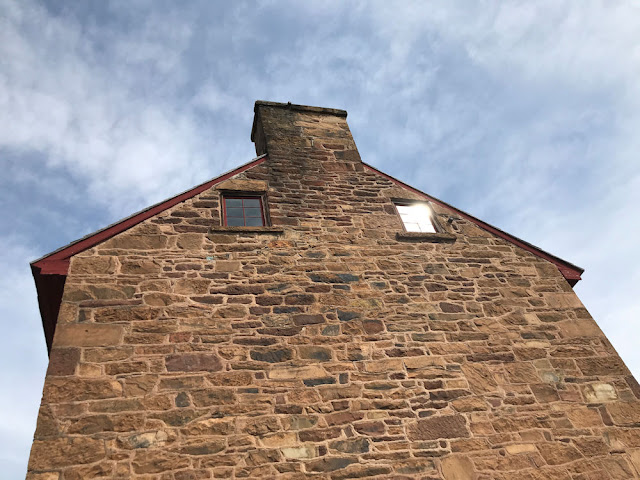 In October 1865 after the war, the Matthews family sold the house. It passed through several owners before being purchased by the federal government in 1949 and was subsequently renovated.  You can buy a ticket at the visitor center just up the road.  This will give you access to the inside, and to several other properties on a self-walking tour.  The docents I have encountered have all been very knowledgeable. 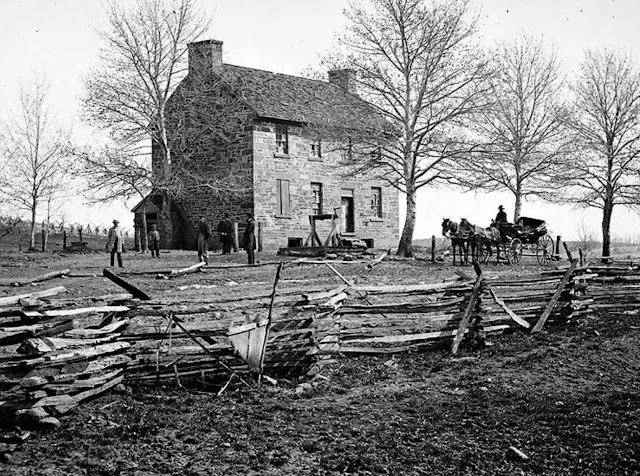 I found these old photos on line.  The one above is dated 1862 after the Second Battle of Manassas.  The one below is dated 1903. 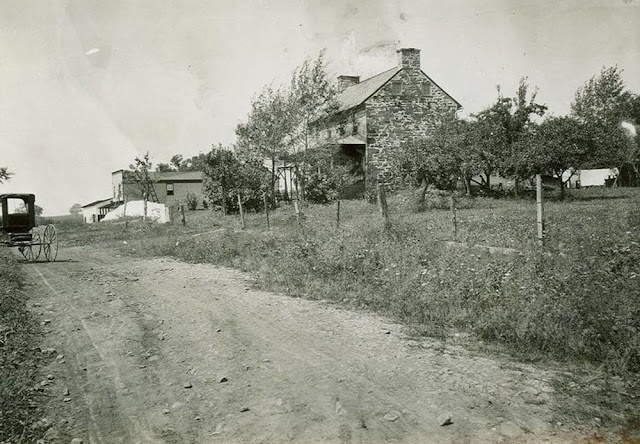 Next is one dated in 1959.  I would have been nine years old, a little girl playing with her teddy bear across the great pond (in the UK).  Little did I know back then that I would be driving by this house and seeing it on a regular basis all these years later.  Talk about forks in the road! 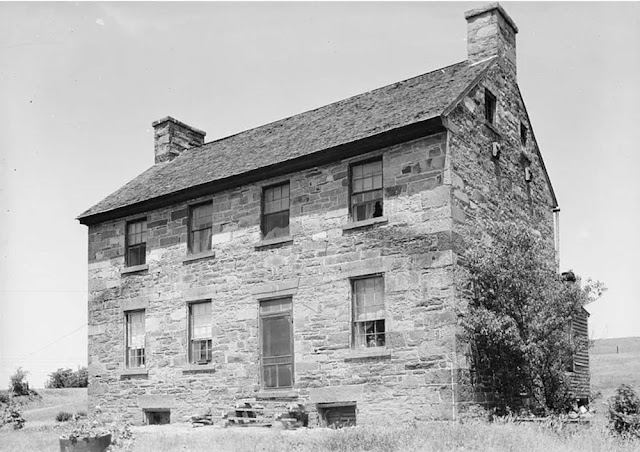 One of these days we're going to have to buy one of the tour tickets, as I would like to see the inside of the house again.  It's been years since the last time.
Like many of the walks we have been on since we have lived here, we enjoyed this one as if it were the first.  We walked up the hill and at the top we enjoyed people watching while reading a historical marker. 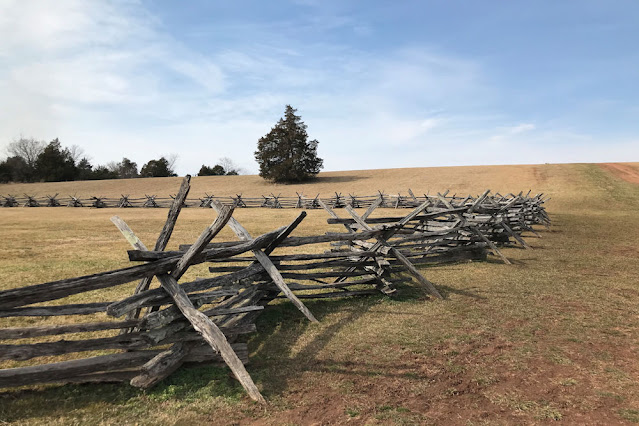 There is the couple with their dog... 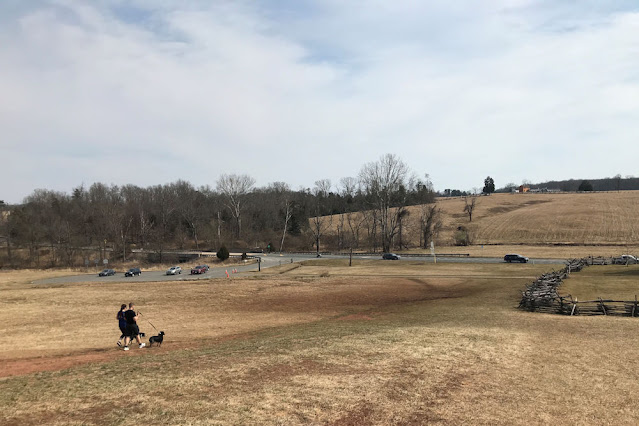 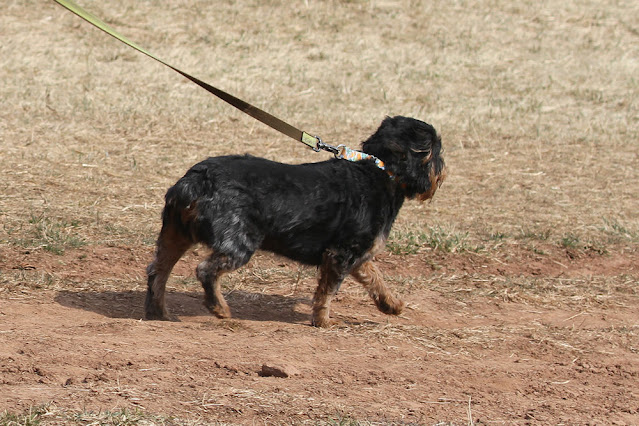 and a family; mom, dad, their two young sons and another sweet dog. 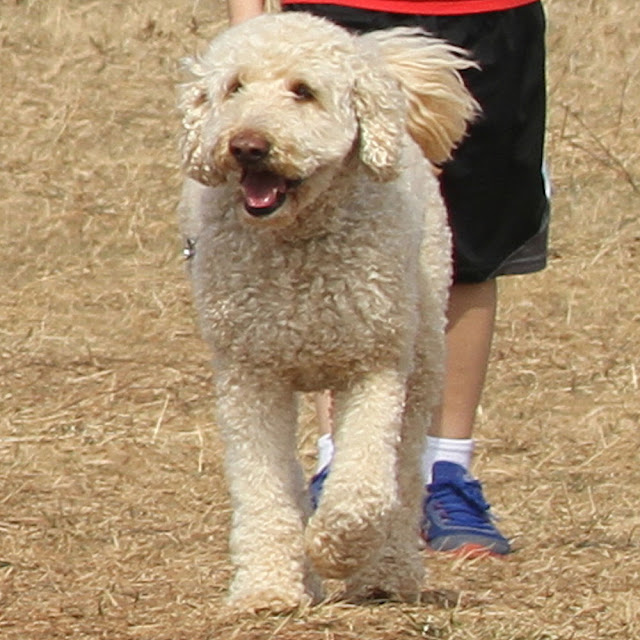 It was very nice to see these people and dogs enjoying their walk.  Everyone was happy being out in the warmth and sunshine. 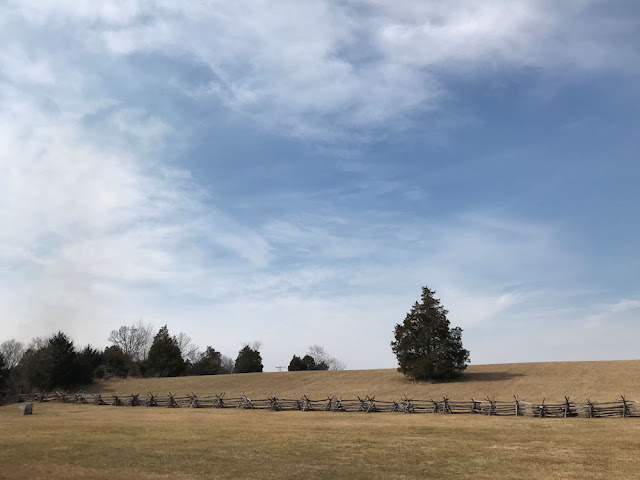 Thanks for looking and enjoy your day.