Continuing from my post yesterday, more from the Archives.

There is a road in Santa Fe that has museums on either side, as well as the botanical garden I shared in a previous post.  You can see what there is if you click here. 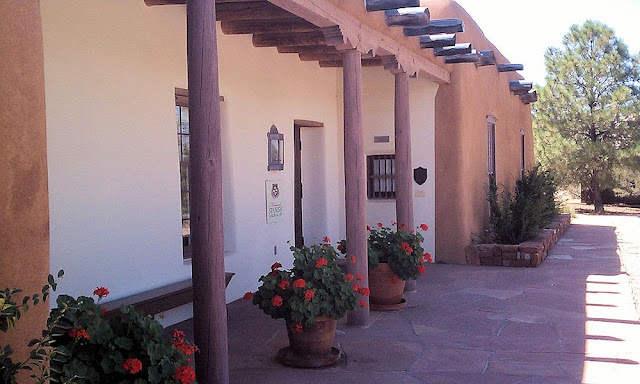 It is 12.15 p.m. and we  have just left the Museum of Spanish Colonial Art.  Its history can be found here. After taking a few photos I suddenly thought I should have asked the lady at the front desk if it was okay.  Sadly no photos allowed inside but I understood perfectly.  I apologized and said I should have asked when I first came in.  She was very very gracious telling me that there was a sign but it was a small one and hard to notice. I could take photos outside however.   So, no photos of the inside but by following the links you can get a good idea of what it was like.  The artifacts collected were magnificent! 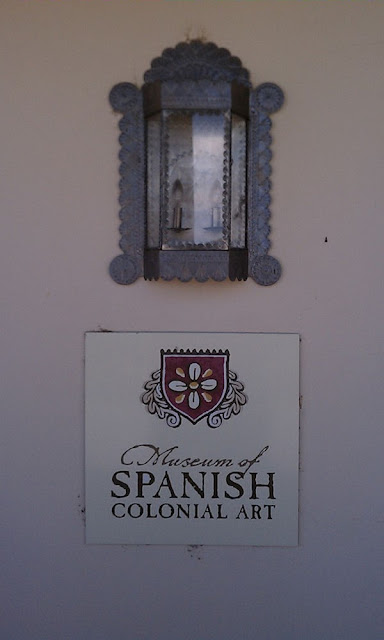 The last place I like to visit on my way out is the gift shop.  The lady behind the counter was talking to another customer about opera and they were discussing Susan Graham, the Mezzo-Soprano who was performing in The Grand Duchess of Garolstein in Santa Fe.  The gentleman she was speaking with told her that his son had a small singing role and they were visiting to see him perform.  Susan Graham was born in New Mexico but raised in Texas and I have seen her perform at our local movie theater when the New York Met have televised live.
When the gentleman had left and I gave her my purchases, I told her how much I enjoyed those live performances and that started off another conversation as she told me that with the altitude, many of the opera singers who perform in Santa Fe have difficulty singing.  The opera house keeps oxygen back stage for the performers who are affected.  When I told Gregg this we thought this might explain why we have been feeling extra tired and a bit heady.  Santa Fe is 7,199 feet above sea level.  I think for some it takes a while getting used to.  We have been fine ever since. 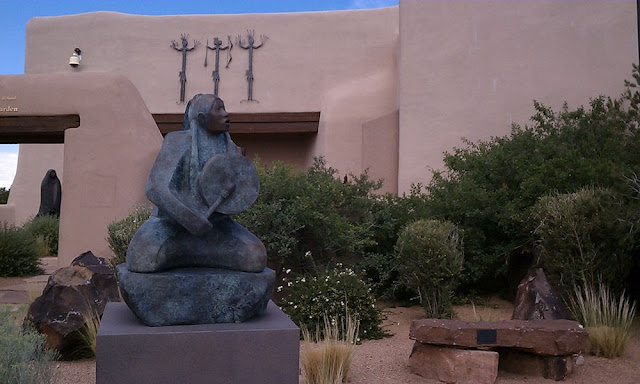 From this museum we walked next door to the Museum of Indian Art and Culture.  Their link can be found here.
Again we weren't able to take photos inside but what we saw in the sculpture garden captured our attention.  From the nearby marker I read that the statue above is called "Songs of the Past by Allan Houser, Warm Springs Apache.  Bronze 1993.  From the private collection of TIA" 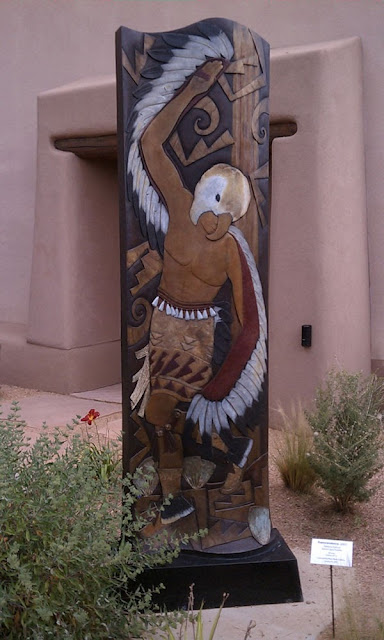 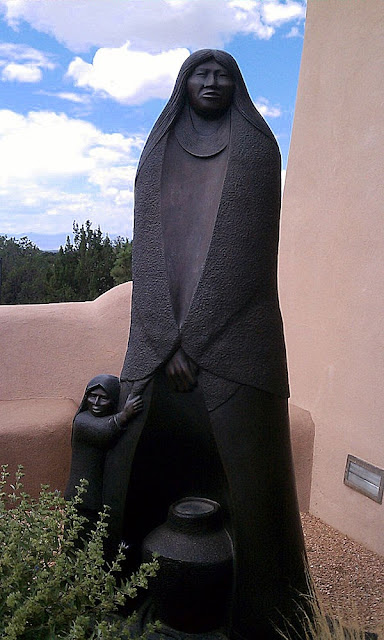 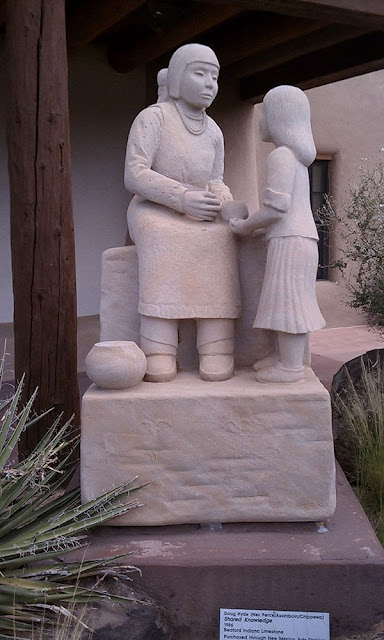 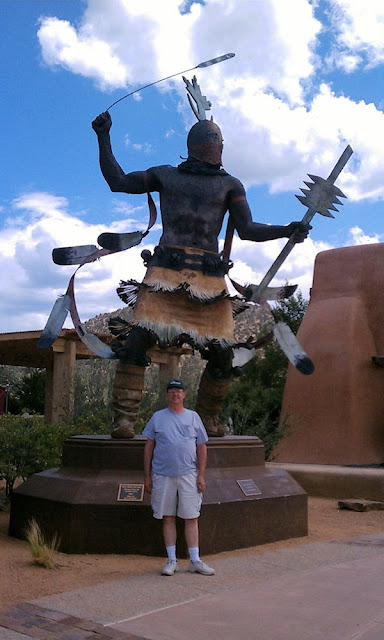 This was my favorite statue.  It towered above our heads.  Gregg is standing in front of Apache Mountain Spirit Dancer by Craig Dan Goseyun - 1995 - San Carlos Apache - Bronze - Courtesy of Sam and Ethel Ballen.  I will be sharing more of this magnificent statue later. 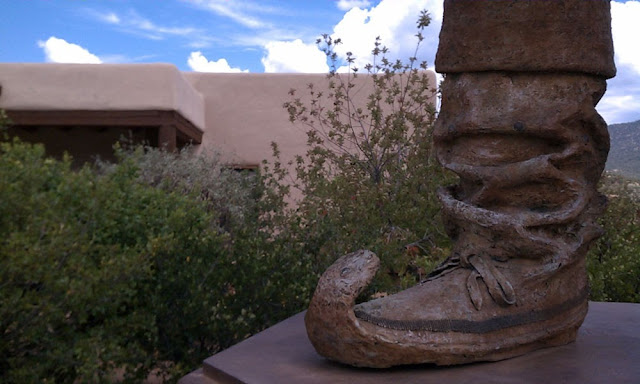 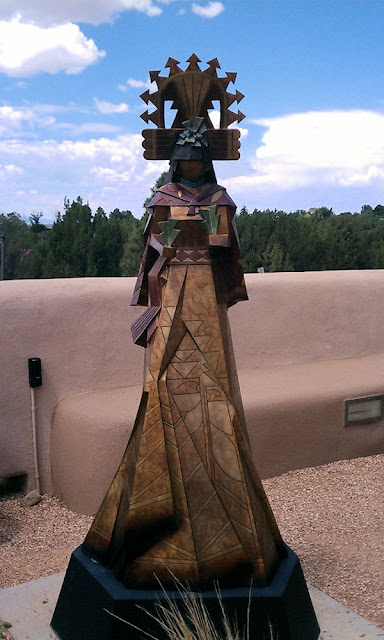 Unfortunately I don't have any information about this one.  I usually take photos of markers but missed it somehow.  Also, I have seen photos of this statue on line when trying to find out what it was without success.  These photos don't do it justice.  When the sun hits it, it shines like gold.  It is stunning to see. 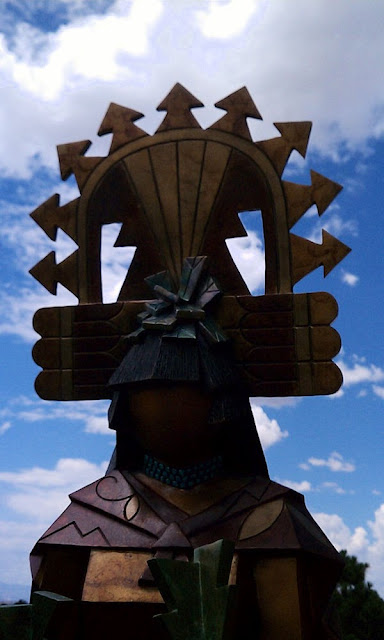 At the suggestion of the lady in the first museum we visited, we had lunch at their restaurant.  She explained it would be very difficult to find a place to eat in town that day.  We both had salads which were very good and shared a piece of blueberry custard pie.  Sorry, forgot to take those pictures.  After lunch we had a wonderful walk around.  The sculptures outside were very interesting.  Inside was just as fascinating. 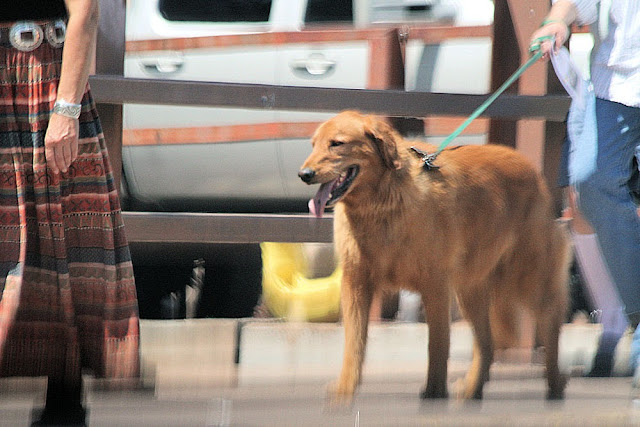 The photo of this cute little dog was taken in Santa Fe.  We had tried to get a room in town earlier but there is a famous yearly Indian Market going on that attracts thousands of people.  You can click here to see what it is all about.  We took a drive through downtown and it was busy, busy, busy but very interesting. We gave ourselves a great driving tour.  We were in so much traffic we were at a crawl and were able to take everything in.  We both agreed that we will enjoy coming back one day and stay for a few days.  Here are a few of the photos taken from the car. 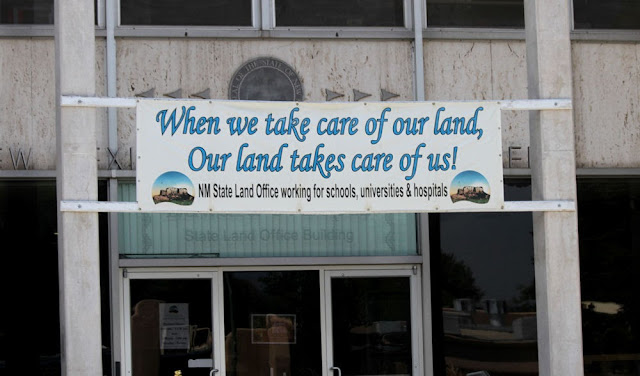 I thought the above sign was worthy of sharing. 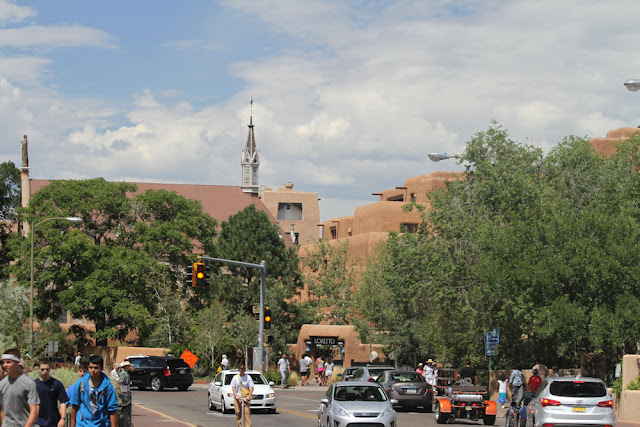 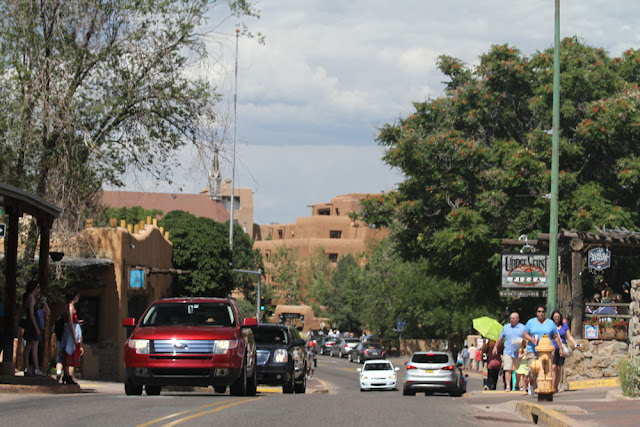 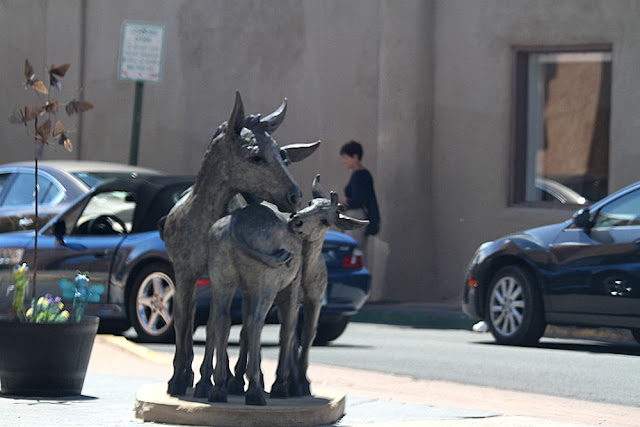 This lovely sculpture of the burros is in an area called Burro Alley.  Early in the 19th century hard-working burros were brought into Santa Fe carrying the much needed wood for building and fire.  The donkeys were lined up in the alley and unloaded, hence the name, "Burro Alley". 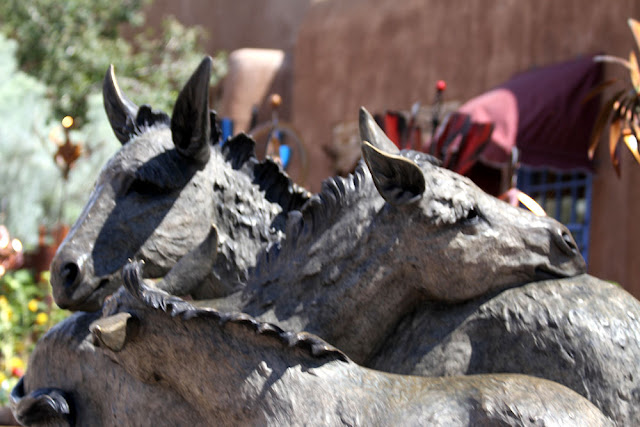 A restaurant on the top of this building caught our eye.  Hopefully one day we will be able to have a meal there while overlooking the town. 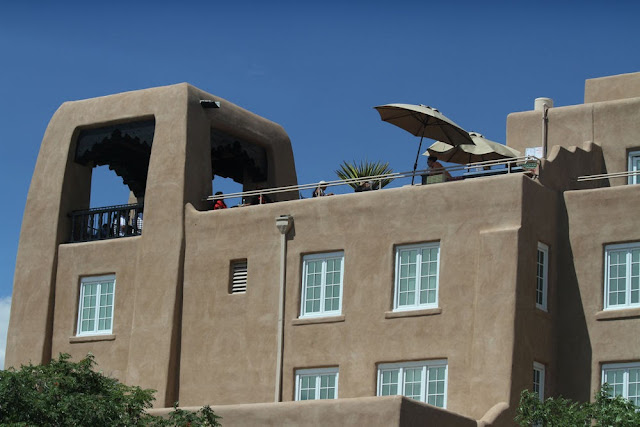 These beautiful children danced in traditional clothing.  Awesome to see and so young.  One looked little more than a four year old.  They are keeping their age-old traditions alive. 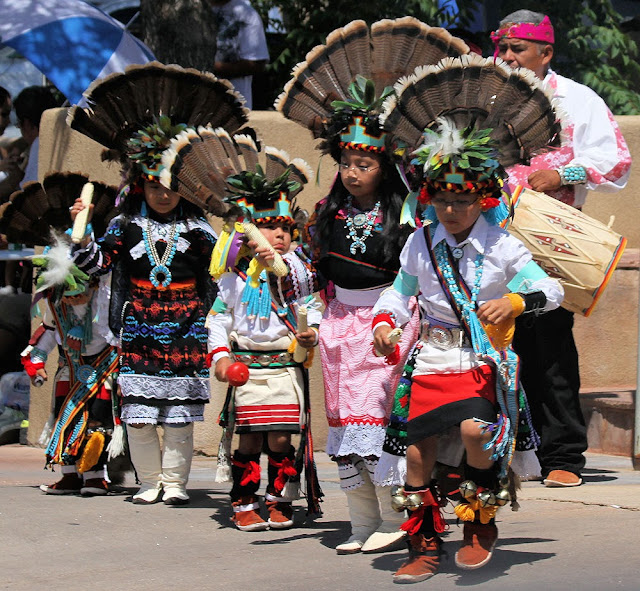 This website shows you more of the historical sites with photos in Santa Fe. 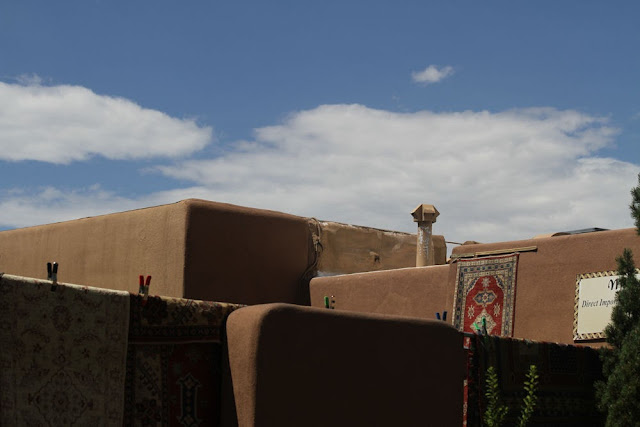 I was intrigued with the adobe buildings of the southwest.  You can read about them at this site. 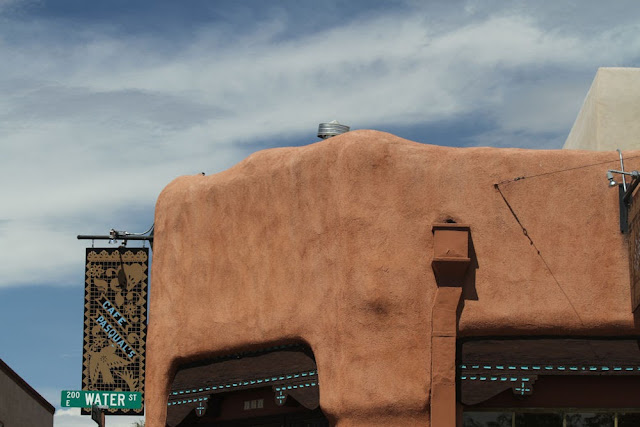 I would have enjoyed taking some of these home with me. 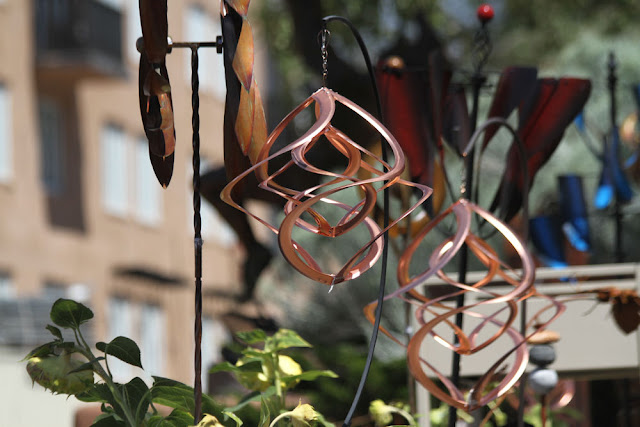 And that was it for our trip to Santa Fe, and here we are on the road again heading to Albuquerque (New Mexico). 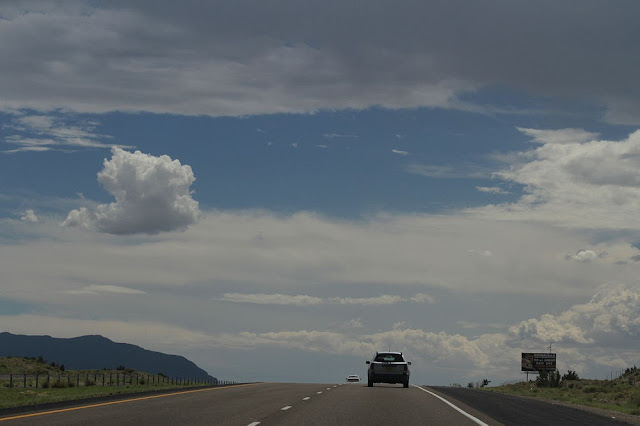 We drove on and reached our hotel at 3.48 p.m.  It was good to stop early that day.  We again slept like a couple of logs that night.

And that's the end of today's post on an old trip to Santa Fe, New Mexico.  We are looking forward to going back one of these days.