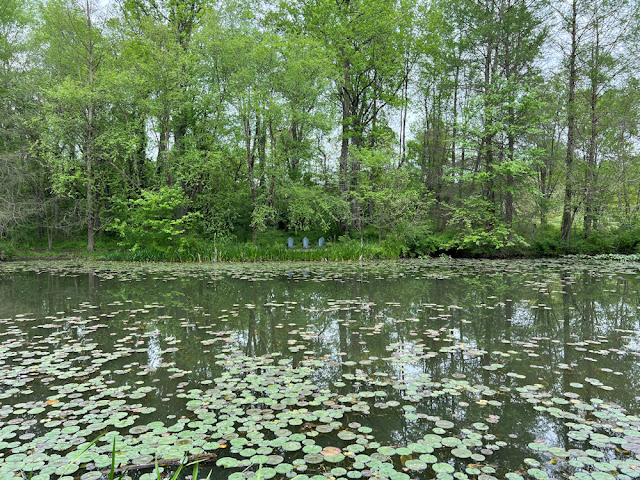 Happy First Day of June to you all. 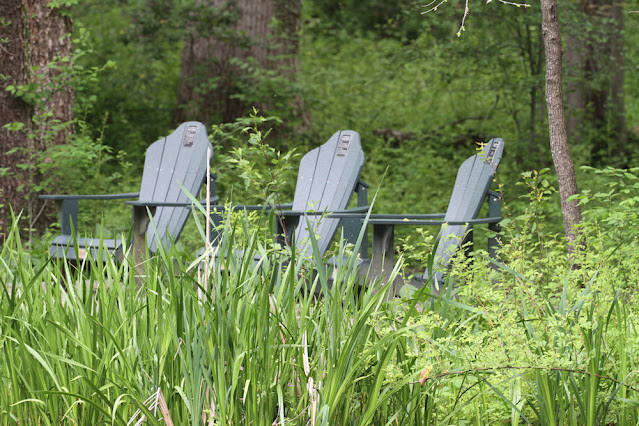 I am continuing our walk at Meadowlark Gardens, this post concentrating on Lake Lena.  There are three lakes at the gardens, this being one of our favorite areas.  We usually make a beeline for the Adirondack chairs you can see in our first two photos, when available, and sit for half an hour or so, when there aren't other people around.  It's quite secluded here.   We spend a pleasant half-hour or so looking at the activity on the water.  It was also where I was 'moved on' by a formidable Canada Goose that at first gently nipped at the shoelaces on my sneakers, which I thought was quite cute until I realized he was getting a little more agitated.  We had inadvertently sat near a nest they were building, story which I have mentioned before in other posts.  The garden people have added additional seating since, all with a pretty view of the lake, each having its secluded spot.  This particular one, however, is our favorite as they were the only chairs available when we discovered this little gem several years ago, and they did and still do, fit us comfortably like an old shoe. 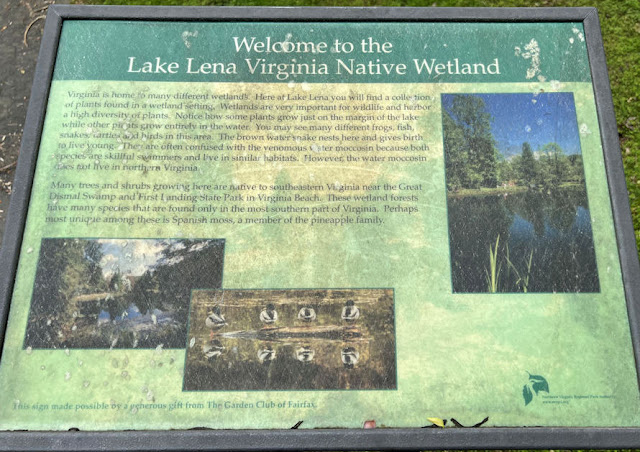 According to their website Lake Lena is in a small wetland at the lowest elevation of the gardens.  There were several native trees already established when the walkway was made over twenty years ago. 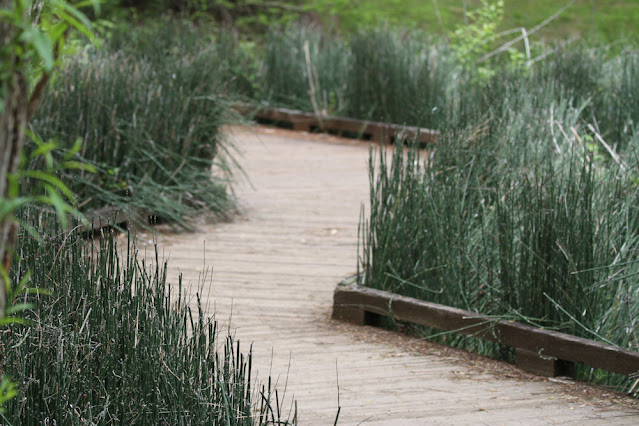 These rather stalky plants are called Rough horsetail.  Its botanical name is Equisetum hyemale.  Other names are Scouring rush horsetail and tall scouring rush.  The plant appears like tiny ridges running vertically along the stems that contains silica, giving the stem the rough sensation.  Hence it is called rough horsetail for the appearance and rough sensation.  Also, early Americans used the plant for scouring pots and pans. 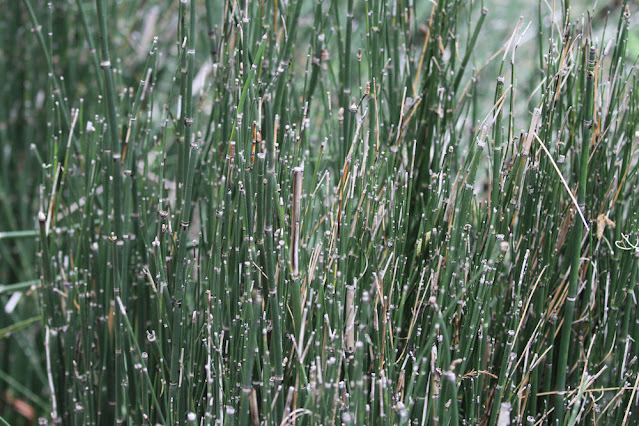 There are numerous bald cypress trees. We are always fascinated with the 'cypress knees' at the water's edge. 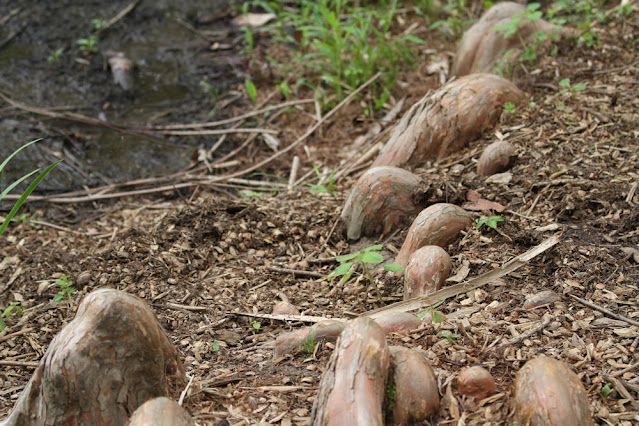 No one can say for sure what their function is, but there is a very interesting article here.  They are generally seen on trees growing in swamps.  One hypothesis is that they might help to aerate the tree's roots, create a barrier to catch sediment and may protect them against erosion, assist in anchoring the tree in the soft and muddy soil, or any combination of these things. 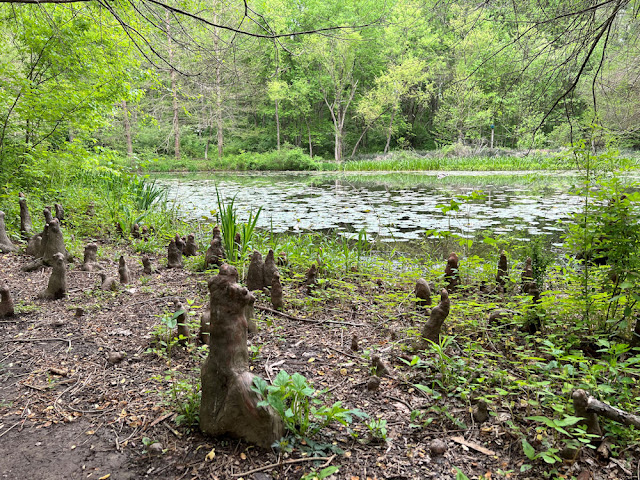 There are also Sycamore, black gum, river birch, willow and sweet gum.  Many of Virginia’s most southerly wetland shrubs and wildflowers are on exhibit here. 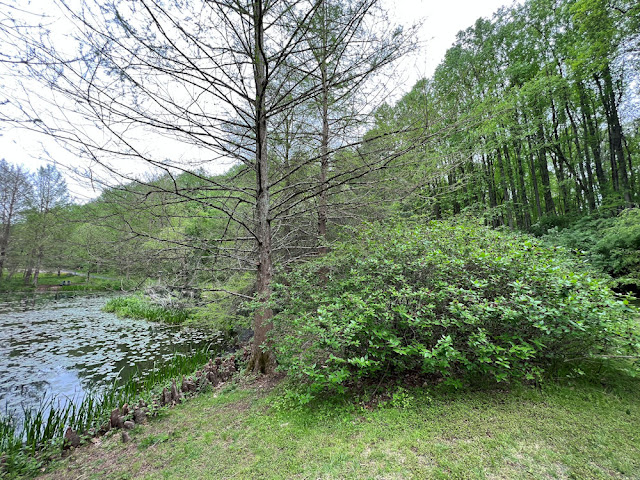 The large bush on the right (above) is the Carolina Allspice, which I have also shared before on other posts to this part of the garden.  Its botanical name is Calycanthus floridus, but is also known by Bubby brush, Eastern sweetshrub, Sweet Betsy and Sweet bubby bush. 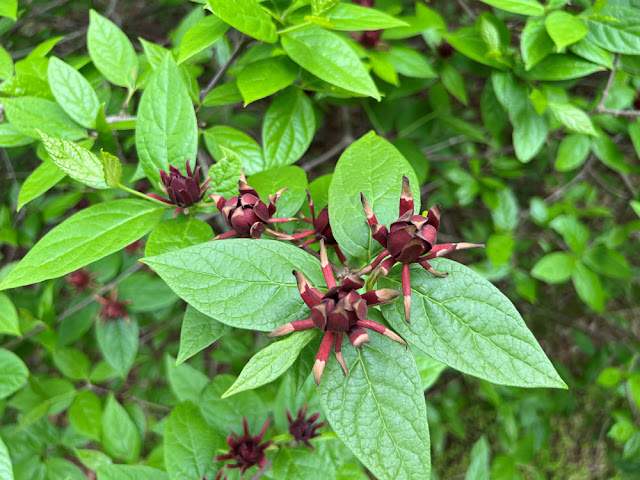 It has fragrant burgundy, spider-like flowers along the branches, and they always remind me of something that would look at home in a prehistoric jungle. They bloom from early spring to mid-summer.  It is also deer resistant.  The powder they obtain from this plant is used in sauces and soups, stews and curries. 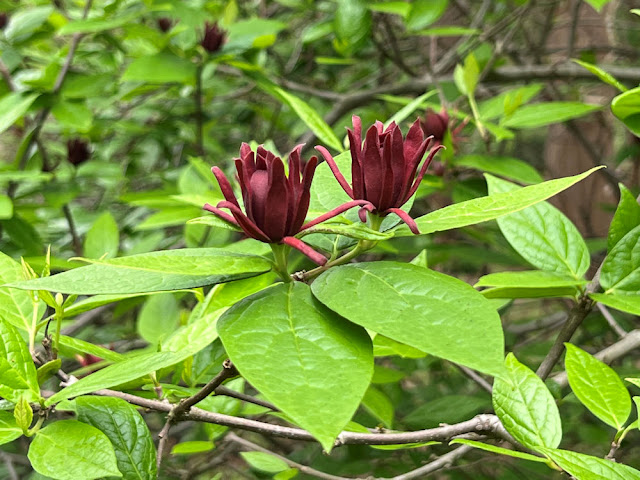 There are aquatic native plants such as pickerelweed, native fragrant water lilies, arrowhead and sweet flag that thrive in our humid summers.  In addition, pitcher plants, red and blue cardinal flowers and blue flag iris, souring rush (Equisetum) mingling with aromatic bayberries. You will see many widespread wetland species around the lake, including cattails and numerous native sedges.  Cyperus and Carex represent two particularly specious genera. 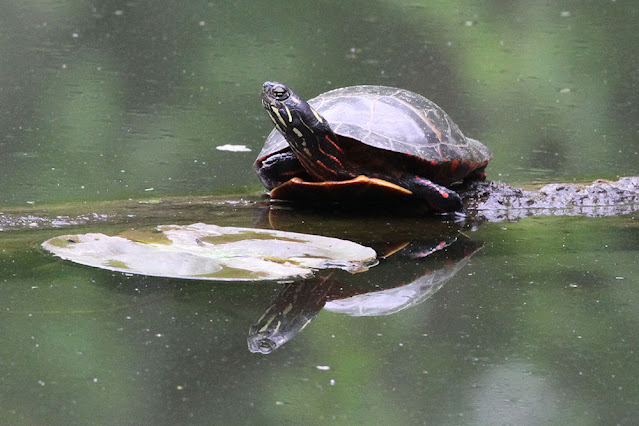 Lake Lena also provides habitat for aquatic animals and birds. Several species of turtles, northern water snakes and native frogs inhabit the area. Many native fish and aquatic insects coexist with the plants. Wading birds frequent the lake. Great blue herons, green herons and black crowned night herons enjoy secretive hunting on the water’s edge. A full assortment of perching birds enjoys the lake too.  The birds I remember seeing here was a Great Blue Heron and a Green Heron, but there was no sign of them today, just the turtles, and they always fascinate me. 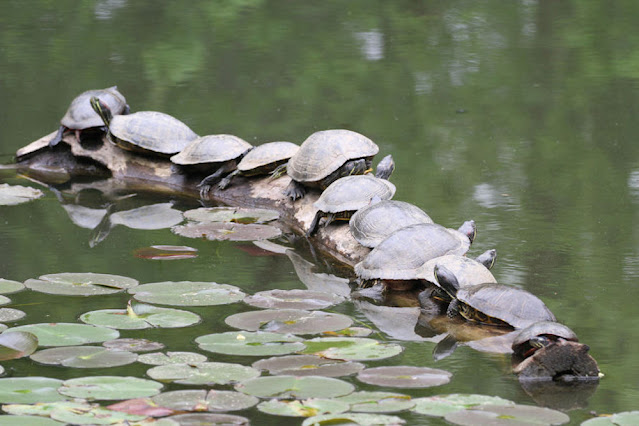 Another plant I found was this yellow one.  A native of Eastern Canada and the United States, it is called Golden Alexander, botanical name Zizia aurear.  It is also known as Golden zizia and Golden Alexanders. 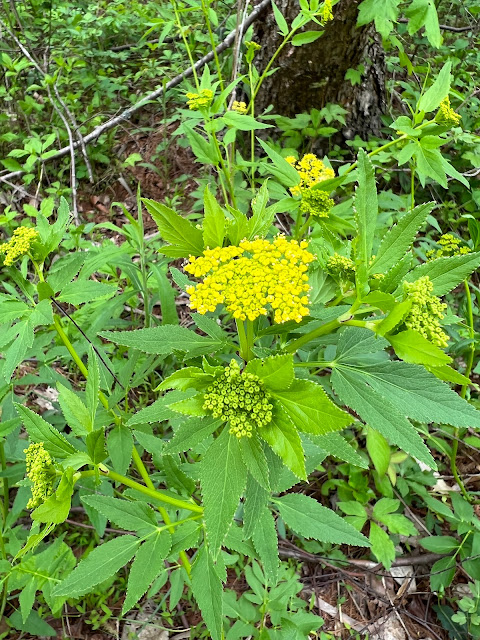 It blooms in spring and summer, and can tolerate -40 degrees F., and is a plant that larvae and the woodland swallowtail butterfly loves to dine on.  A perennial, it grows to about two feet tall. 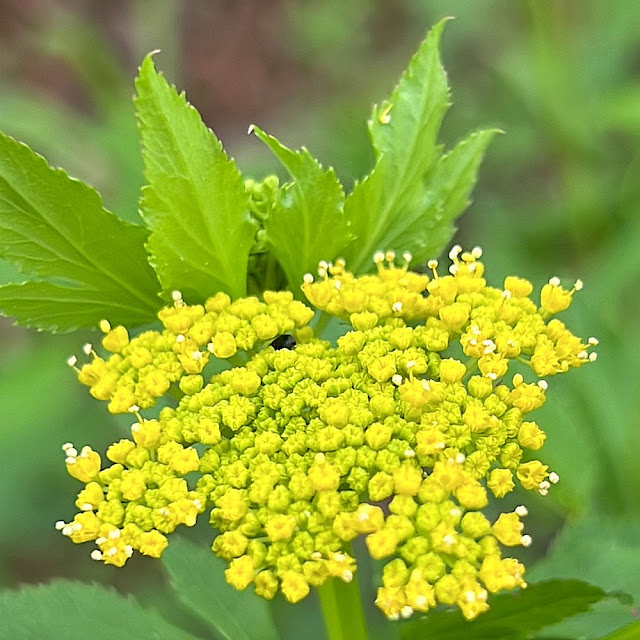 There are bird boxes situated all over the garden.  This is the first time I have seen one made out of an old log.  We passed it as we were leaving Lena.  A simple design but clever. 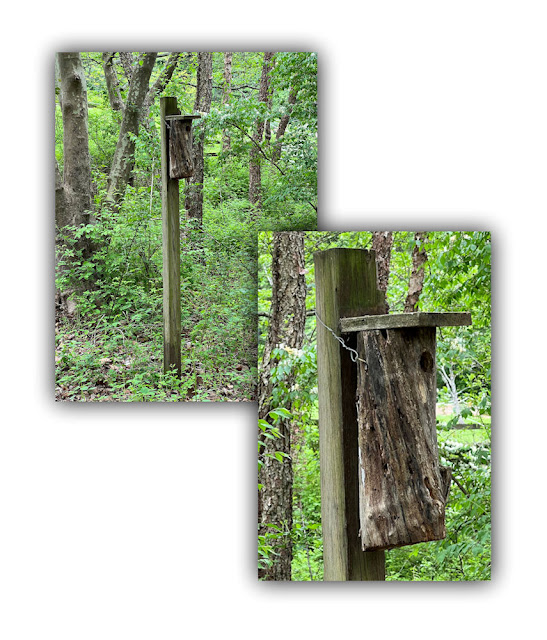 I also found the Flame Azalia not too far away. There was a large bush blooming and reaching way above my head.  It was gorgeous and photos don't do it justice. 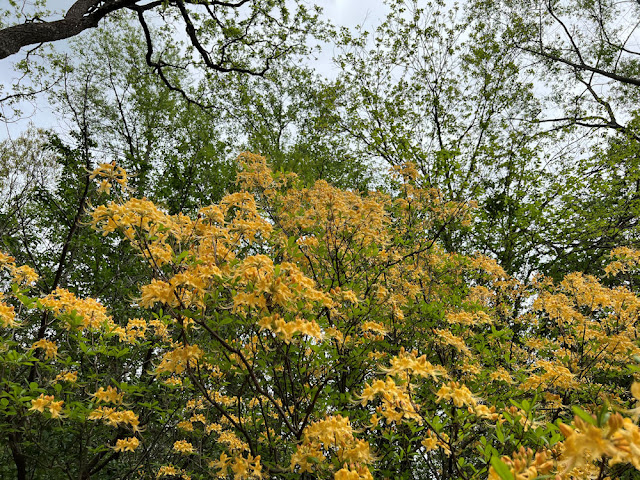 Flame azalea, botanical name Rhododendron calendulaceum, is a shrub native to the Appalachian area of the United States.  The generic name, Rhododendron, is Greek for "rose-tree".  The name 'calendulaceum' means Calendual-colored, referring to the flowers. 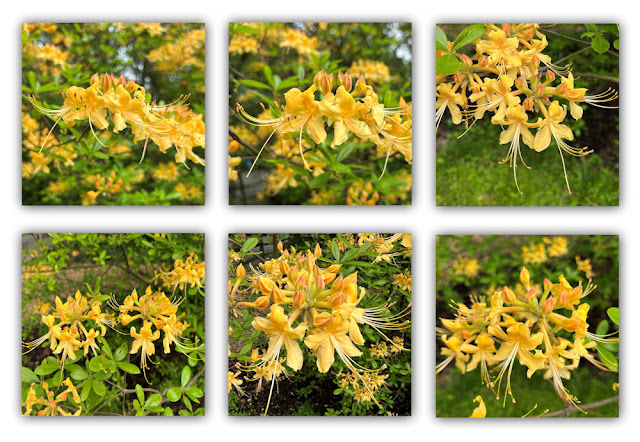 An early French botanist Andre Michaux, who botanized in North America in the late 1700s, discovered and first named this plant, describing it as new to science. The vernacular name, “flame” azalea, derives from not only the fiery color of the flowers but also the expanded, unopened buds, which suggest the flame of a candle. 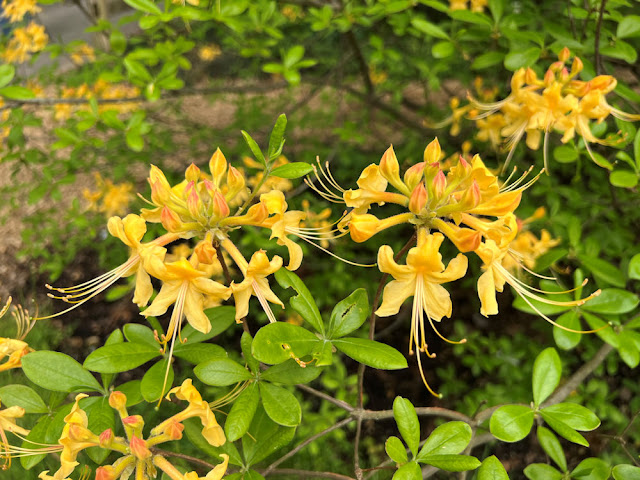 I am finishing off with a map of Virginia and part of its surrounding states, just because I found the map and I liked it... 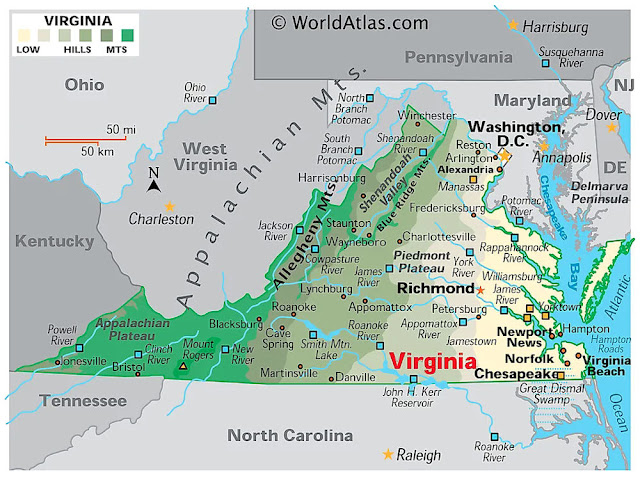 and again as an art print. 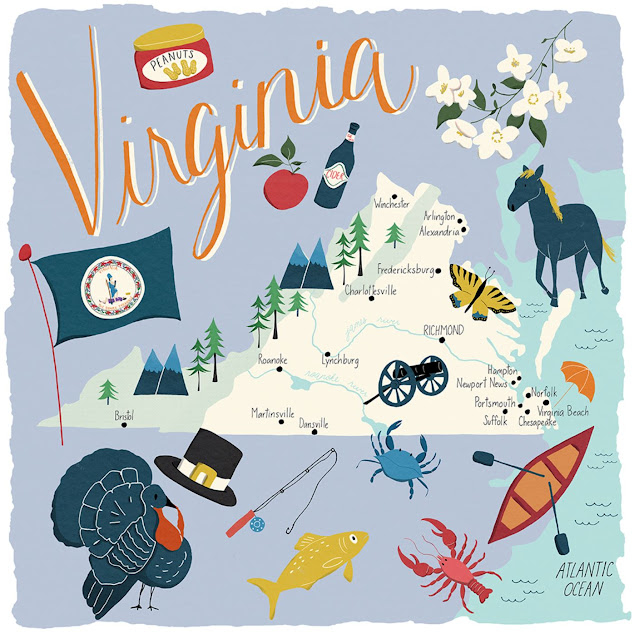 and finishing off, one showing Virginia's location on the U.S. map. 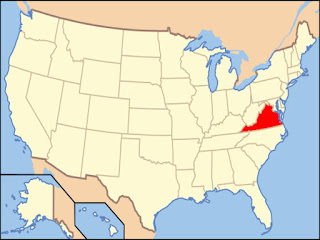 This is the end of today's post.  I have one more on the gardens which I will share soon.
Thank you for visiting today and I hope the rest of your week is a great one.