We walked further today and that was a good decision.  The walkway ends, which is normally where we do our loop and turn back, but if we continue there is another wooded area.  This one is closer to the water's edge which we can see from the path.  The photo below is on the main walk where you can see the level of water is extremely low.  Further along it isn't quite as dry, and this changes on every visit. 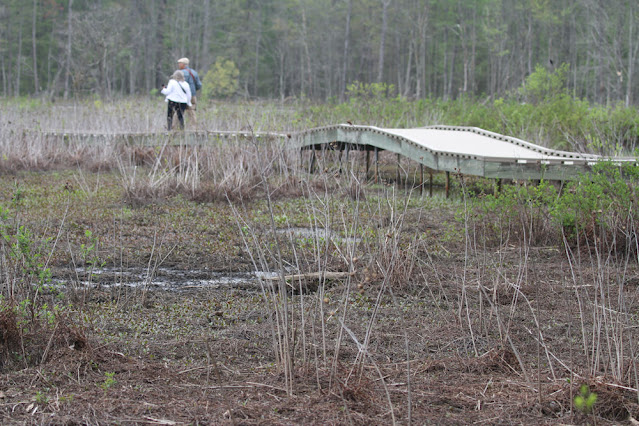 We reached another walkway, a shorter one, across another marshy pond. As always happens we see a couple of people looking intently across, and like a moth to the flame we joined them.  A lady told us there was a hawk.  I am saying it is a Red-shouldered Hawk because I went to the Huntley Meadow's Facebook page, and someone had taken photos of what looked like the same bird and identified it.  (At the time of writing there is a brilliant header shot of the Hooded Merganser family from yesterday's post.  I am not sure how long it will be there).  Once again, if you think that is an incorrect ID, I would appreciate you letting me know.  On the Facebook page, people share marvelous photos, and do identify some, but not always.)  This is the scene we were looking at. 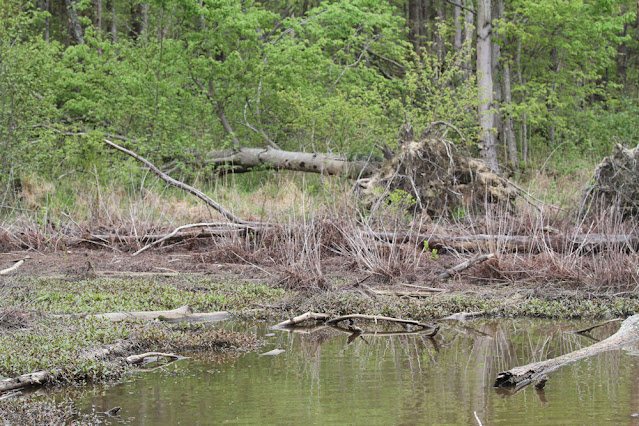 There is a crow and I see that first.  The hawk is harder to find, but with the help of the lady, there it was. 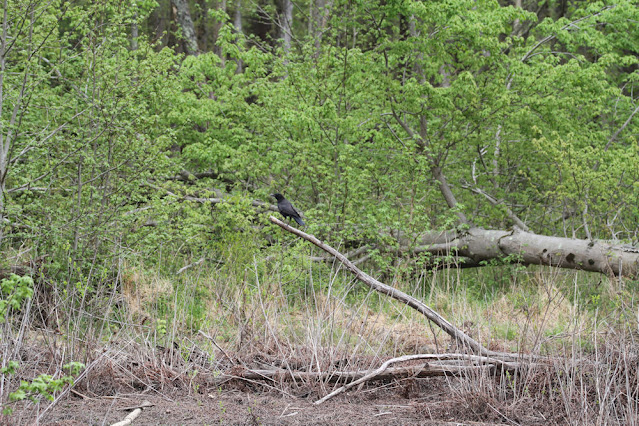 We were surprised to see the crow and the hawk so close together.  I understand that crows can mob hawks but nothing of that nature seemed to be going on at the time.  They were just sharing the same space.  I added arrows to the same photo below.  The crow is quite visible but the hawk not so much, as he was foraging in the grass. 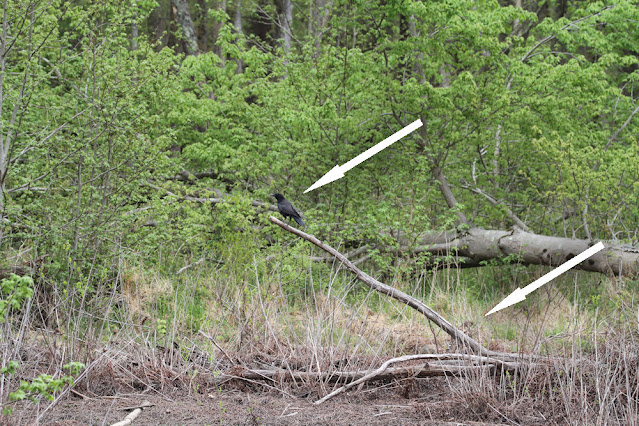 I know that smaller birds tend to mob larger ones if they are in the vicinity of their nesting sites. Years ago I watched such a scene when I stepped out my front door.  I noticed the noise at first and could hear that the birds were definitely agitated.  I looked up and a Great Blue Heron was flying through our area and the smaller birds didn't stop surrounding and chasing it until it was well away. 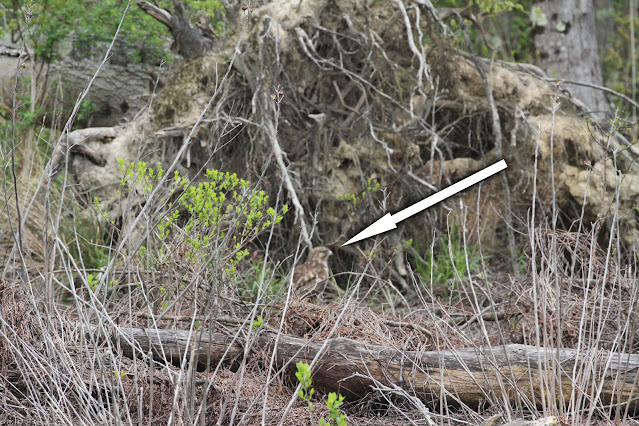 We were fascinated that the crow and the hawk were within such a close distance of each other. 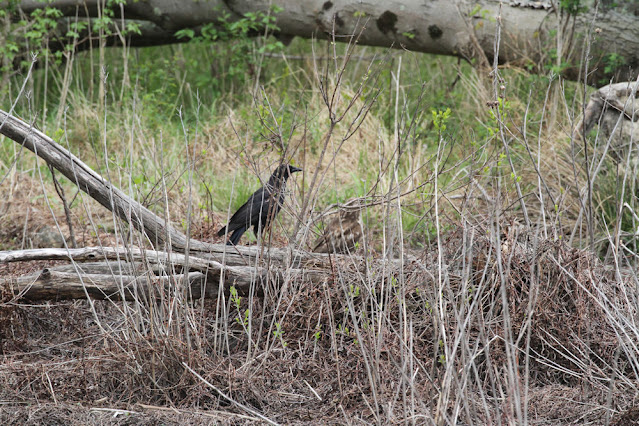 Crow flew off eventually and left the hawk to continue its watch.  The hawk hopped up onto the top of the old fallen tree.  This is its root end. 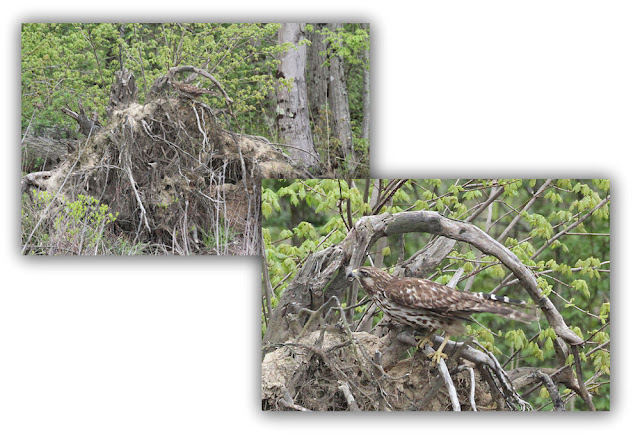 I happily took several photos of this amazing bird. 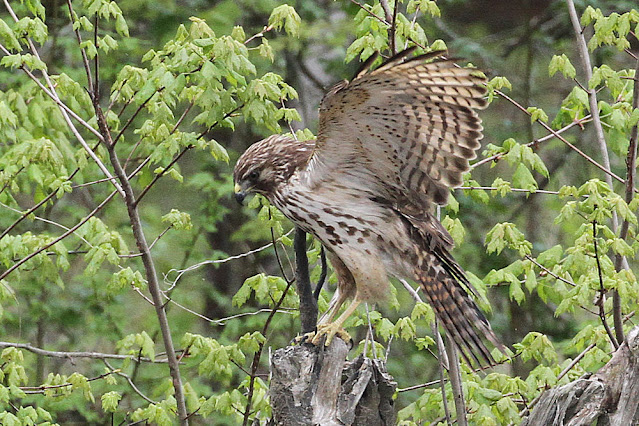 While Red-shouldered hawks have been reported to live for up to 20 years in the wild, few survive in the wild beyond two and a half years.  They are, however, on the 'least concerned list'.  According to the powers-that-be, the global breeding population of red-shouldered hawks is 1.1 million. 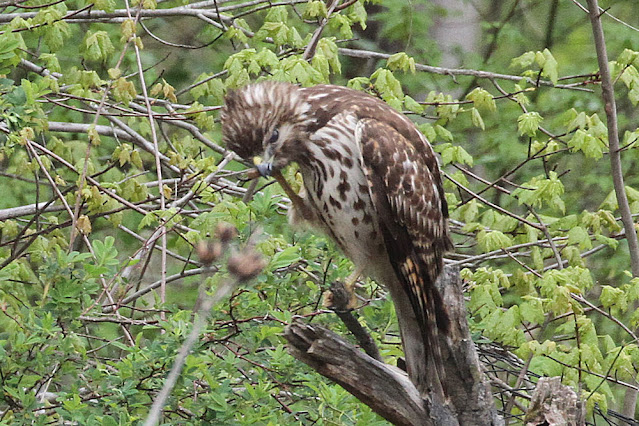 The Red-shouldered hawk, Buteo lineatus, is mainly found in North America, living in their breeding range which spans from eastern North America along the Californian coast as well as northern to northeastern-central Mexico. 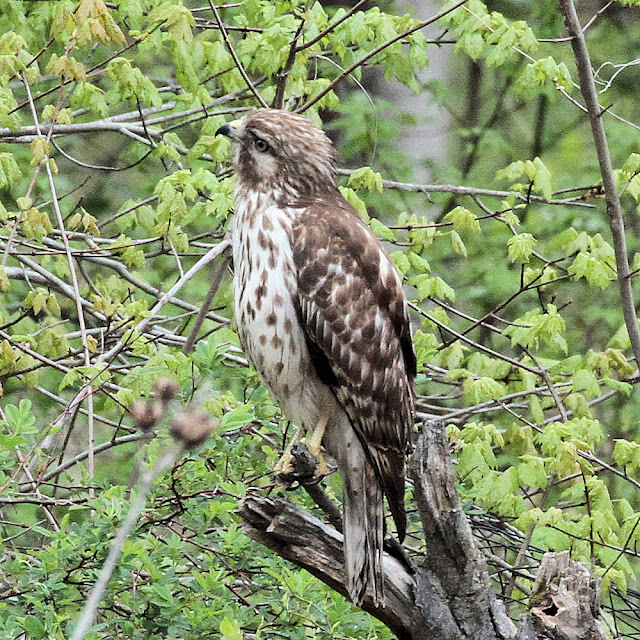 These birds breed once yearly and are monogamous in nature.  Mating rituals include the 'sky dance' of males, where they soar in flight high in the air while calling, and then make several deep dives towards the female, until finally perching upon the female's back.  These displays usually happen in the late morning or early afternoon. 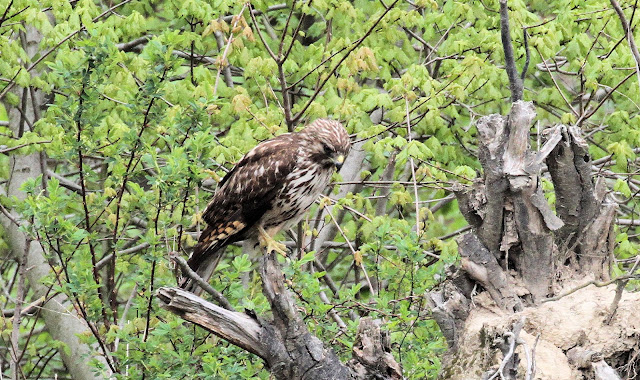 The breeding season is between April and July, with the same nest being used each year. Refurbishing of the nest with twigs, leaves, bark, and sticks is done in spring by males and females. Females usually lay two to five eggs in the nest over two to three days. The nesting period is 42-49 days while the incubation period is usually 33 days. 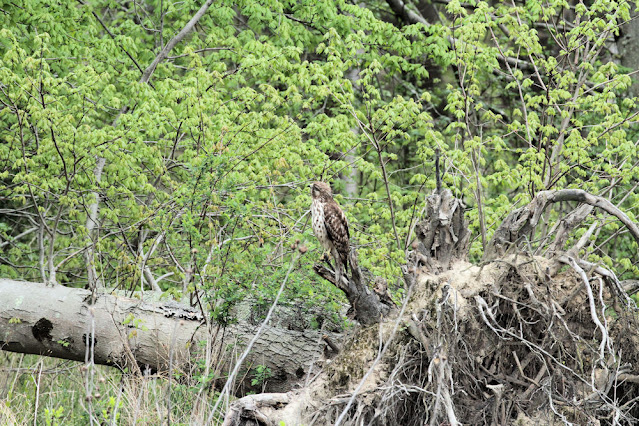 The hatched nestlings are brooded by the mother for a week, during which time, the male brings food for the nest. The nestling stage lasts for six weeks. While chicks leave the nest at six weeks of age, they are still given food by the parents for another 8-10 weeks. They become independent at 17-19 weeks old. 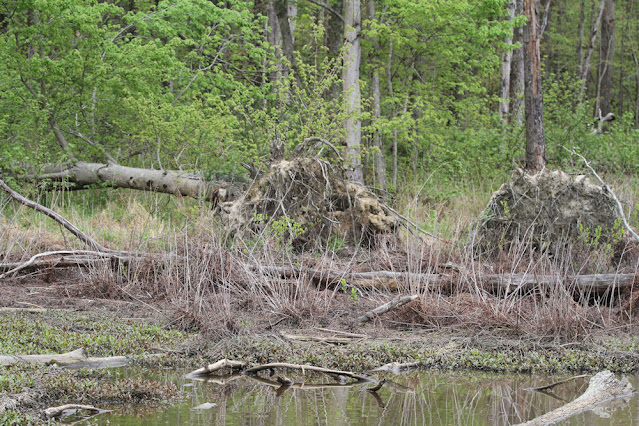 Thanks for coming along on my birding adventure.  I will have more feathered friends next time. Have a great week!