Question: Who is this WWI Ambulance Driver?

Answer: The driver is Walt Disney.  A clue is perhaps the cartoon drawn on the side, though I could find no mention of it.  This photo was taken before Walt left Paris to return home. 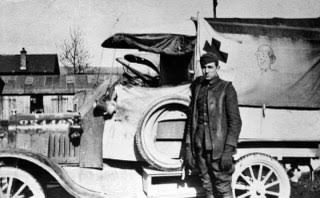 When the United States entered the war in 1917, Walt Disney's older brothers enlisted but Walt, who was 16 years old at the time, was denied enlistment because of his age.  However, he was determined to join up and when a friend learned that the Red Cross Ambulance Corps accepted volunteers as young as 17, Walt used his artistic skills to alter the birth date on his passport application from 1901 to 1900.  He was accepted and reported for training at Camp Scott, a temporary encampment near the University of Chicago.  Yellow Cab Company mechanics taught recruits how to repair motors, assemble and disassemble vehicles, and drive over rough terrain.
Because his departure to Europe was delayed while he recovered from influenza, Disney's unit sailed without him.  He then joined another company awaiting transport to France.  While that unit waited to be shipped out, the war ended with the armistice on November 11th, 1918.  Nevertheless, they shipped out 50 men the following day to aid in the occupation.  Disney was No. 50. 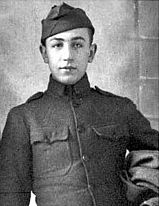 Because he hadn't left the United States until after the war ended, Walt never fulfilled his desire to be an official ambulance driver, and never experienced the danger and real horrors of war, but he did his duty and put in his fair share of driving.  Disney was first billeted in a chateau in St. Cyr.  Later he transferred to Evacuation Hospital No. 5 near Paris, where his duties included being a driver and mechanic for Red Cross supply trucks and providing taxi service for army officers.
There is more to this very interesting story and you can read it at this link.

Question: Name the largest continent of the world?

Asia ranks as the biggest continent and it occupies almost 29.1% of the Earth's landmass.  The continent extends for 176,139,445 square miles and is home to 4.1 billion people.  Some people regard Asia and Europe as being a single continent, thus making it the largest by far.

My information came from here.

How many bones are there in a human body?

Bones provide the structure for our bodies. The adult human skeleton is made up of 206 bones. These include the bones of the skull, spine (vertebrae), ribs, arms and legs. Bones are made of connective tissue reinforced with calcium and specialised bone cells. Most bones also contain bone marrow, where blood cells are made.Bones work with muscles and joints to hold our body together and support freedom of movement. This is called the musculoskeletal system. The skeleton supports and shapes the body and protects delicate internal organs such as the brain, heart and lungs.Bones contain most of our body’s calcium supply. The body is constantly building up and breaking down bone tissue as required. Healthy bone needs a balanced diet, regular weight-bearing exercise and the right levels of various hormones.

My information and more came from this link.

Which state in the U.S. is known as the Empire State?

How did it get this name?  Signs commonly point to George Washington. Although other, unsubstantiated stories crediting Washington exist, the best documented source is a 1785 thank-you letter to the New York Common Council for bestowing upon him the Freedom of the City. In addition to praising New York's resilience in the war he describes the State of New York as "the Seat of the Empire."

Who created Winnie the Pooh?

The first collection of stories about the character was the book Winnie-the-Pooh (1926), and this was followed by The House at Pooh Corner (1928). Milne also included a poem about the bear in the children's verse book When We Were Very Young (1924) and many more in Now We Are Six (1927). All four volumes were illustrated by E. H. Shepard.

The Pooh stories have been translated into many languages, including Alexander Lenard's Latin Translation, Winnie ill Pu, which was first published in 1958, and, in 1960, became the only Latin book ever to have been featured on The New York Times Best Seller list.

In 1961, Walt Disney Productions licensed certain film and other rights of Milne's Winnie-the-Pooh stories from the estate of A. A. Milne and the licensing agent Stephen Slesinger, Inc., and adapted the Pooh stories, using the unhyphenated name "Winnie the Pooh", into a series of features that would eventually become one of its most successful franchises.

Christopher Milne had named his toy bear after Winnie, a Canadian black bear he often saw at London Zoo, and Pooh, a swan they had encountered while on holiday. 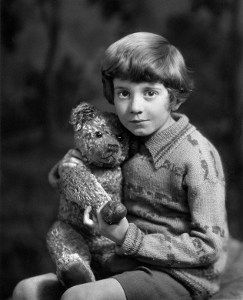 This was Christopher in 1928

The rest of Christopher Milne's toys – Piglet, Eeyore, Kanga, Ro and Tigger were incorporated into Milne's stories.  Two more characters, Owl and Rabbit, were created by Milne's imagination, while Gopher was added to the Disney version. Christopher Robin's toy bear is on display at the Main Branch of the New York Public Library in New York City.

I could go on but more information can be found here.  It is a fascinating story.

How many days are there in a fortnight?

A fortnight is a unit of time equal to 14 days (2 weeks). The word derives from the Old English term fēowertyne niht, meaning "fourteen nights".  The word is rarely used in North America. I grew up using the term and hadn't thought of it in a long time until finding this for my monthly quiz.  The above snippet of information was found here.

I will be back next month with another quiz. I hope you found this interesting and fun.

Thanks for joining in, and have a great weekend.