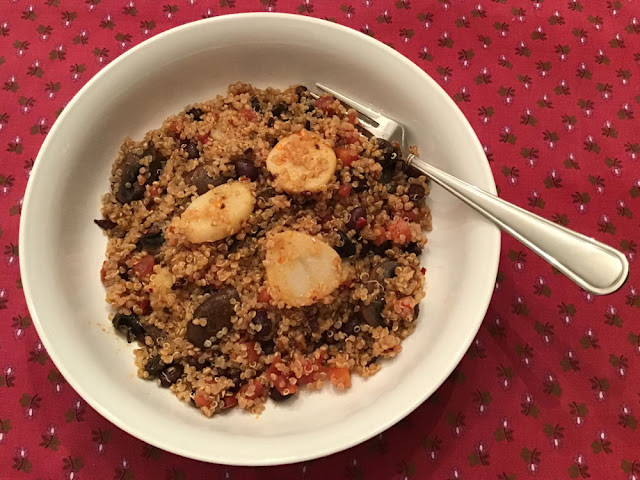 I have no recipe link for this one.  It was basically using what I had in the fridge and pantry.  I have seen similar recipes here and there that no doubt put the idea into my head, and it all came together to suit my own taste.  My dear other half was out of the house for the day and I knew what I was fixing myself for lunch.

1 container fresh mushrooms (even though I only used 1/4 cup for this recipe, I cooked them all and used what was left in our next meal)

Put 2 cups of water in a separate pot and heat on high until water is boiling.  Carefully pour in the quinoa, give it a stir, cover and lower heat to a simmer. Cook according to package directions (mine said 12 minutes).

Slice the mushrooms and put in the previously heated non-stick frying pan (medium hot).  Stir them around a bit and then carefully pour a cup of water over the mushrooms (it should be on a low simmer. Do be careful so as not to splash when putting water into the pan).  Cover and cook for about 10 minutes.  Check in the middle of cooking to see that the water hasn’t evaporate, and add a little more if needed.

After the ten minutes, and if there is any water left in the pan, turn the heat up a little until the water disappears.

If you find the mushrooms burning instead of caramelizing, turn heat down using your own judgement.  (I add the water to use less fat when cooking, but if you don't mind adding extra butter, leave the water step out and just sauté them all in more butter until done.)

You will melt the tablespoon of butter in the same pan, and stir the mushrooms until coated.

Add the other veggies and beans giving them enough time to heat through.

Add the cooked quinoa (which should still be warm) and mix with the veggies and beans until combined.

Next add the tablespoon of Chili Crisp and mix in until combined. 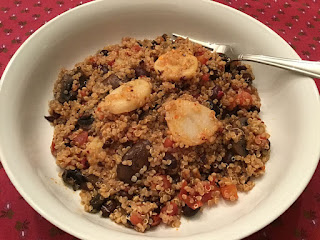 If you like grains this was a very tasty lunch.  The ingredients are only a guideline and you can use any favorite.

Next time I would probably add a green vegetable for more color, fresh diced tomato or a sweet red pepper.  Also a garnish of sliced green onions, or parsley, or cilantro would be nice.

Any leftover ingredients from the cans went into our mixed green salad at dinner time, along with a handful of chopped walnuts.  Come to think of it, walnuts would also have been a nice addition to this recipe.

There was enough quinoa left for two more meals and at other times I have measured 1-cup portions for the freezer.

The Chili Crisp was only enough to the mix to be very flavorful and wasn’t that hot (I don’t usually eat things too hot and spicy), but you can add more to taste, or leave that out entirely and add one of your own flavorings if you prefer.

In the photo those are slices of potato on the top.  They had been bought by mistake and I wanted a way of using them up. They were quite good with everything else.

I am not a proper recipe writer so if there is anything confusing, please let me know in the comments.

Thanks for looking and enjoy your week.