Continuing our visit to Green Spring Gardens, I have shared some of the flowers from my previous post, with the addition of a Tiger Swallowtail. There were many that day.  The Creeping Zinnia and Bluemist Flower I have shared before. 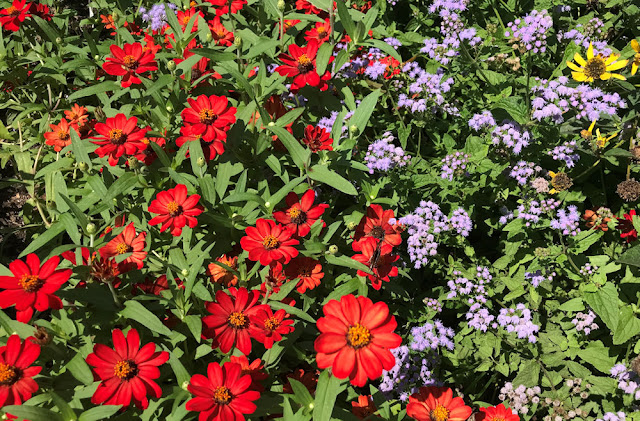 Next you can see the fruit of the Jujube. Jujube fruits are eaten fresh, dried, boiled, stewed and baked, and are used to flavor tea. 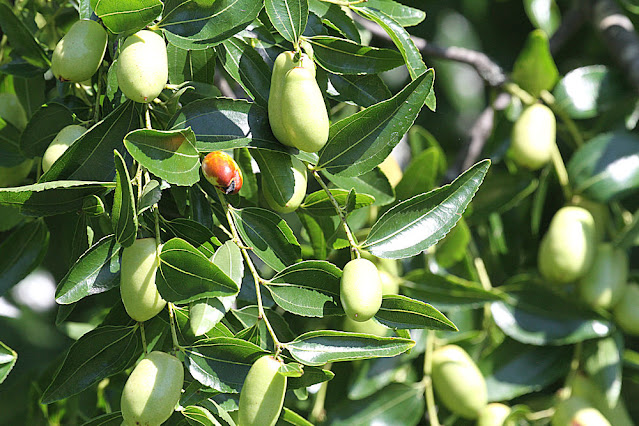 They resemble Persian dates and when made into glacé fruits by boiling in honey and sugar syrup, they resemble dates and are sometimes known as Chinese dates.  Juice obtained from the fruits is used in making small candies called jujubes.  The raw fruits are high in Vitamin C. 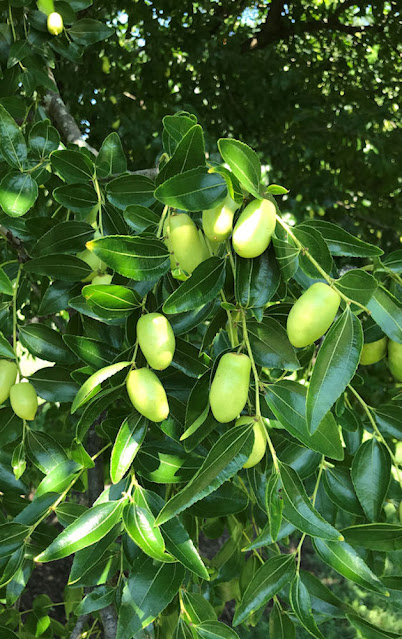 Most are varieties of the common jujube (Z.jujuba), native to China, where they have been cultivated for more than 4,000 years. They have small yellow flowers followed by dark, brown, round to oblong fruits the size of small plums. 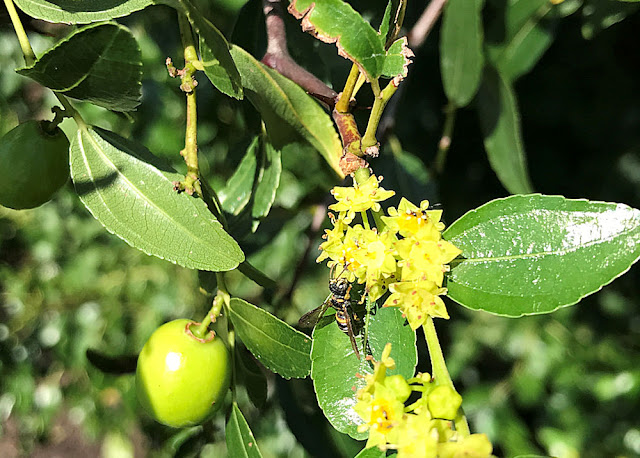 Cardoon (in the photo below and also shared in previous posts) is a type of thistle.  It tastes like a bitter version of a giant artichoke, and has small, prickly flower heads.  Unlike the artichoke, you eat the stems not the flower buds.  The edible part looks like a celery stalk.  The ones in my photo have all gone to seed.  I wish I had taken photos earlier when they showed their prettier version, but there's a certain beauty in these too.  It is a perennial that is planted in late January to February and harvested in early spring. 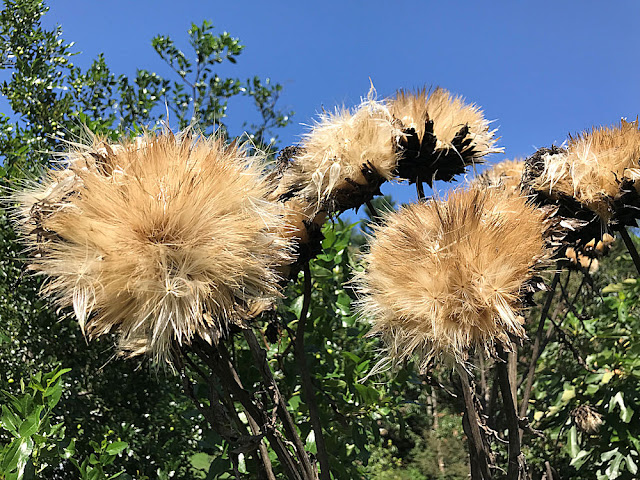 The next interesting flower is called the Klip dagga.  Its common names are Christmas candlestick, Bald bush and Lion's tail.  Botanical name is Leonotis nepetifolia.  Some of the stalks towered above my head and I read that it grows up to 10 feet.  It is native to tropical Central Africa and southern India.  The petal colors range from purple to orange to red.  The nectar has a sweet grapefruit taste, and many parts of this bitter plant have been used in traditional medicines. It likes full to partial sun and is moderately drought tolerant and prefers well-drained soils. 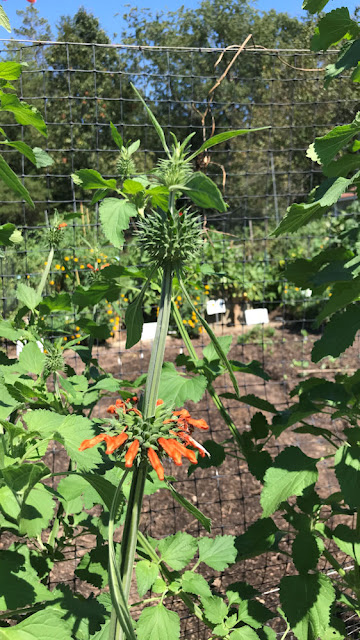 I always enjoy looking at what is growing in the garden.  I wished that I could get closer but it has a tall, see-thru barricade.  To protect it from any hungry deer and other animals no doubt. 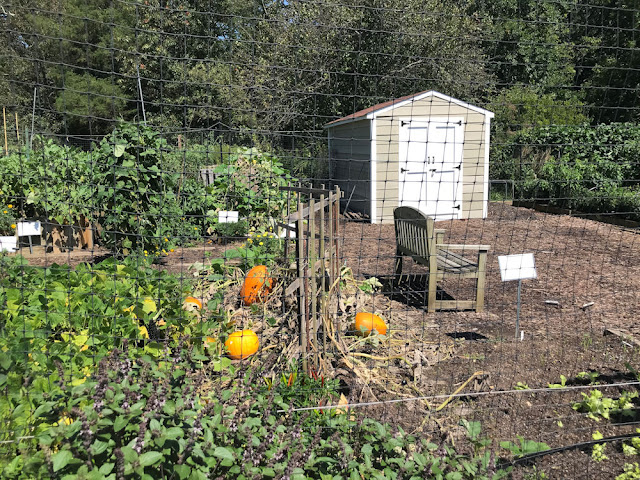 We do have a good view of what is growing.  The pumpkins are the first thing that caught my attention.  There are lots of fruit trees in the garden also. 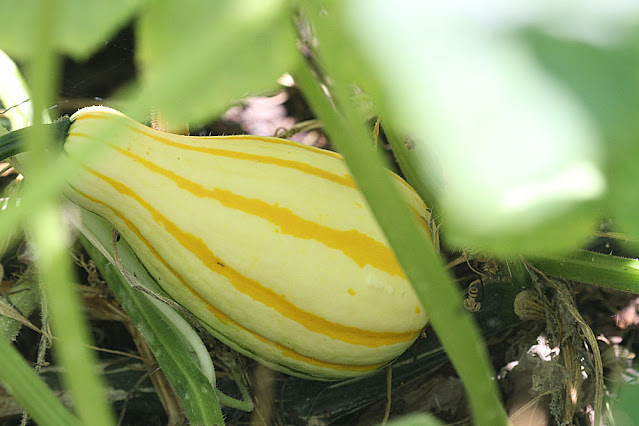 I found a Skipper on a Mexican Sunflower.  Skippers remind me of a cross between between a butterfly and a moth. 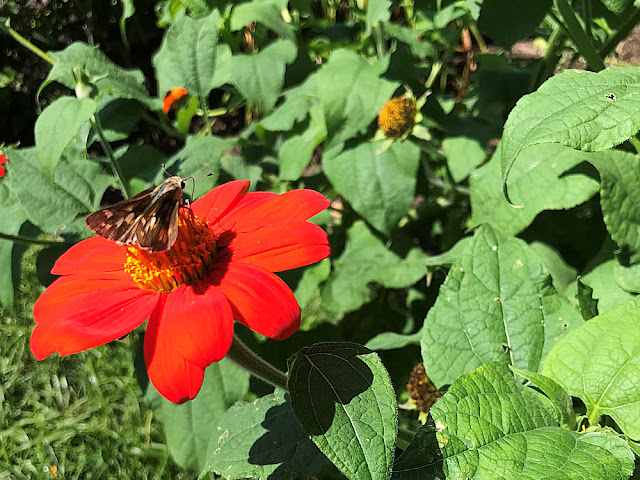 They are generally small but their wings have powerful muscles for such a tiny creature, and enables them to fly up to speeds of 20 miles per hour (30 km). 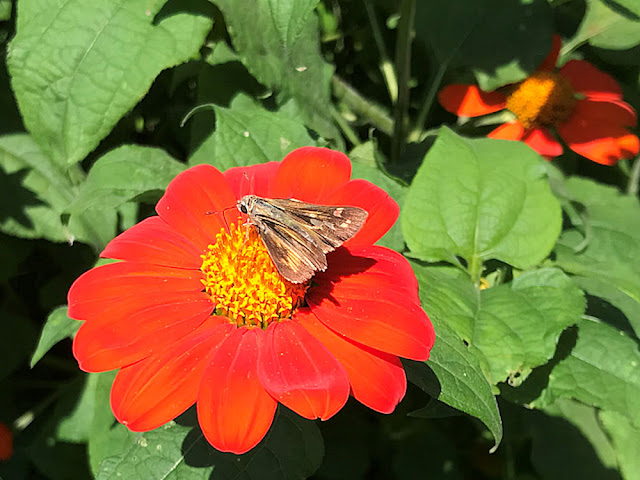 A butterfly that I see a lot of in the warmer months is the Tiger Swallowtail, and it can be found from Canada to Mexico.  It is widespread and numerous in the wild and fortunately not on the endangered species list. 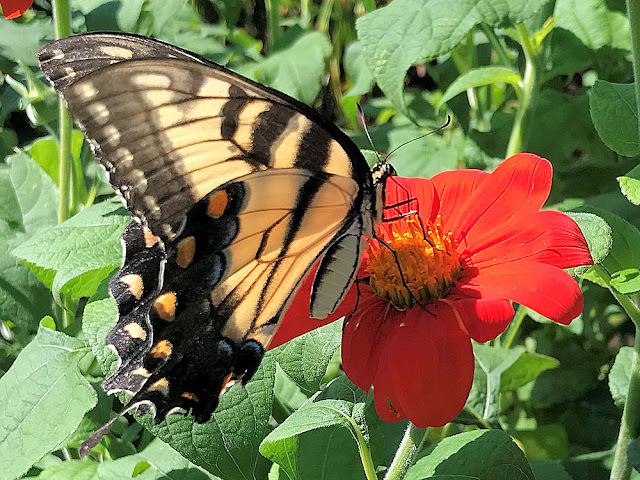 Males have yellow wings covered with black stripes.  Borders of the wings are black with yellow spots.  Hind wings end with 2 black wing tails.  Females look just like males with additional blue markings on the hind wings.  Certain percent of females have completely brown or black wings with faint stripes. 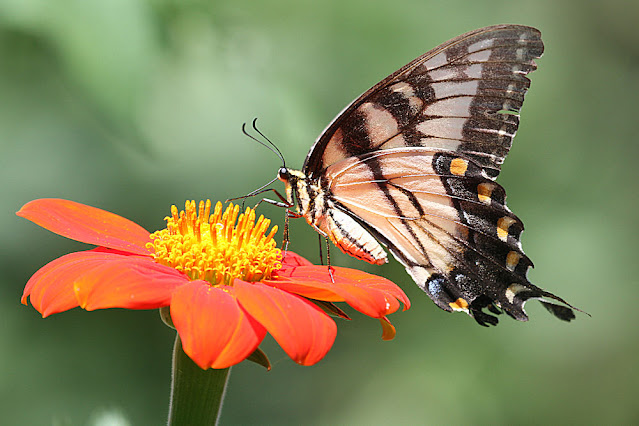 The Tiger swallowtail has a straw-like tube in the mouth which functions like a flexible tongue designed for the suction of liquids.  This is curled into a spiral when it is not in use.  They visit oregano, purple coneflowers, zinnias and the butterfly bush to extract nectar from the flowers.  It occasionally consumes juice extracted from the overripe fruit. 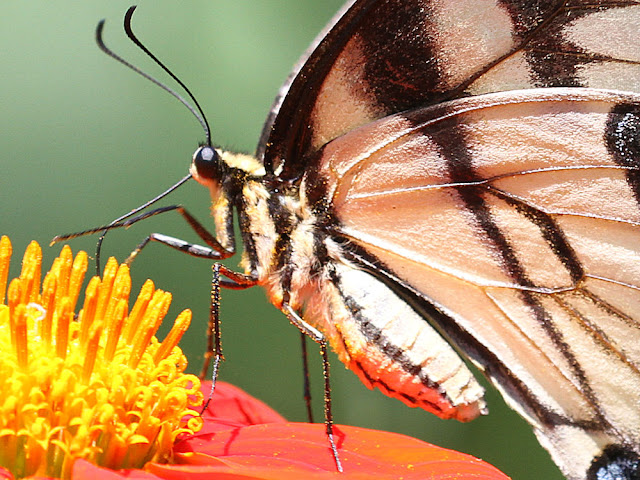 They can be seen in the wild from February to November.  It has a wingspan of 4 to 5 inches, and usually moves by gliding through the air.  It can also lose one of its wing tails after a close encounter with a predator, and is still be able to fly. A female produces 2 to 3 broods in a lifecyle.  She lays yellowish-green, spherical eggs on wild cherry, tulip tree, white ash and sweet bay.  Leaves on these plants are a basic source of food for the caterpillars (larvae that hatch from the eggs).  Nests made of leaves and silk are used as shelter from predators.  The egg stage is generally from 4 to 10 days, depending on temperature and host plant.  The caterpillar (larval) stage is 3 to 4 weeks.  The Chrysalis (pupal) stage is 10-20 days (except for overwintering pupae) and the adult butterfly stage if 6-14 days. 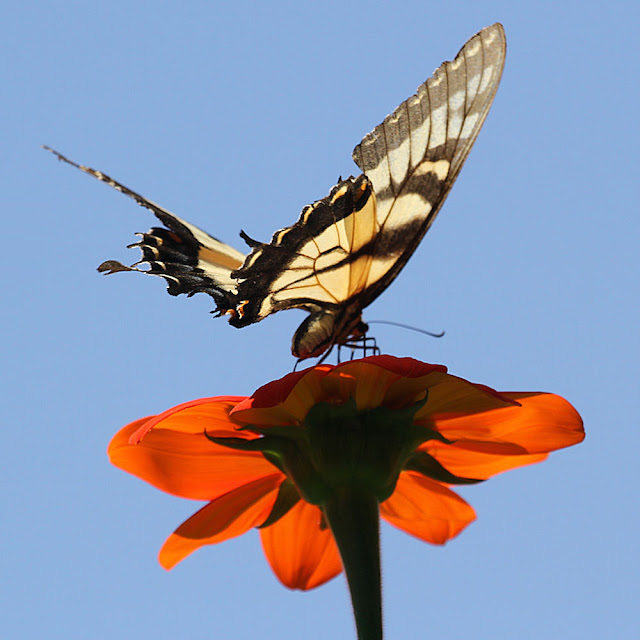 There is an interesting website at this link telling us all about the Mexican Sunflower.  It has other common names, Tree marigold, Japanese sunflower, Nitobe chrysanthemum and its botanical name is Tithonia diversifolia.  I have taken several photos in previous posts from my visits to Green Spring Gardens.  It is a native to Mexico and other regions in Central America, but will readily grow in any tropical climate.  It has been used for cultural and culinary purposes in Japan, and as the regional flower in certain parts of Thailand and Vietnam. 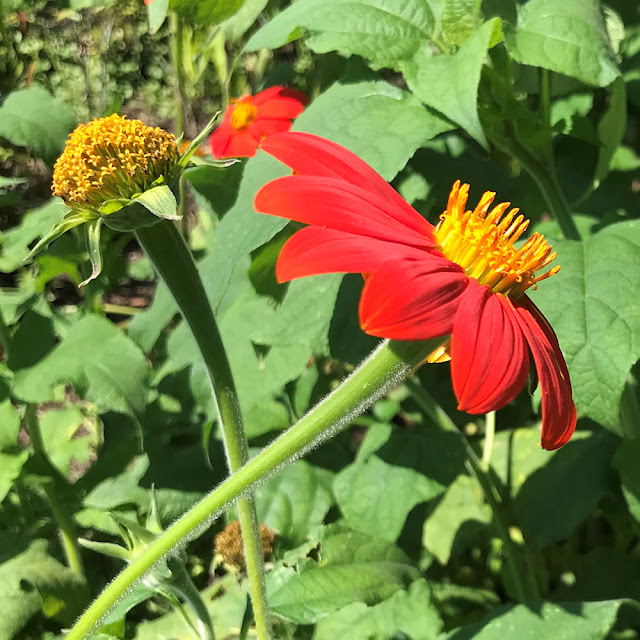 Since writing this post we have made another visit to the garden a few days ago.  I was amazed at how many flowers were blooming.  We are very grateful to all the hardworking people who keep this garden going, not only the staff but all volunteers.  A lot of hard work but I would imagine a labor of love.
You can see Part 1 and Part 3 if you click on their links. 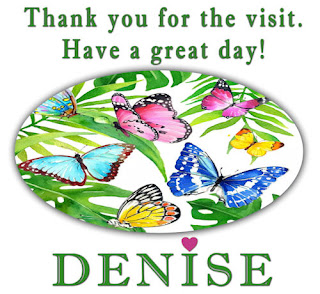