We reached the water and it was wonderful!  Across the river is Maryland.  We are on the Virginia side. More on this part of our walk in the next post. 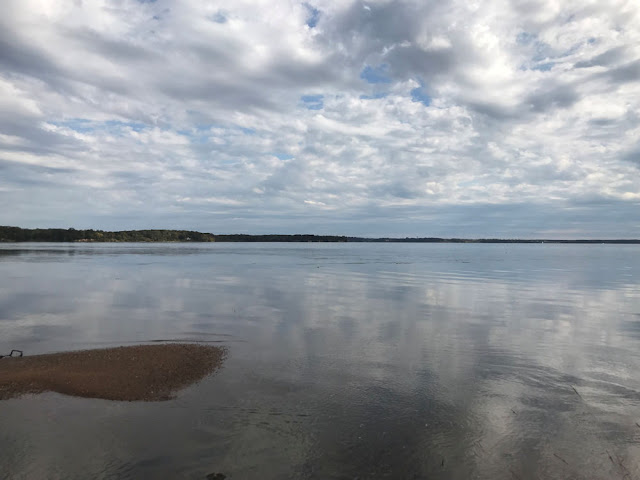 In my previous one I promised you butterflies.  We found a pair on the Frost Aster (botanical name Symphyotrichum pilosum), but I won't go into any more detail on the flower today, as I am going to concentrate on butterflies (and later in my post the snails, which aren't quite as pretty but totally fascinating all the same. 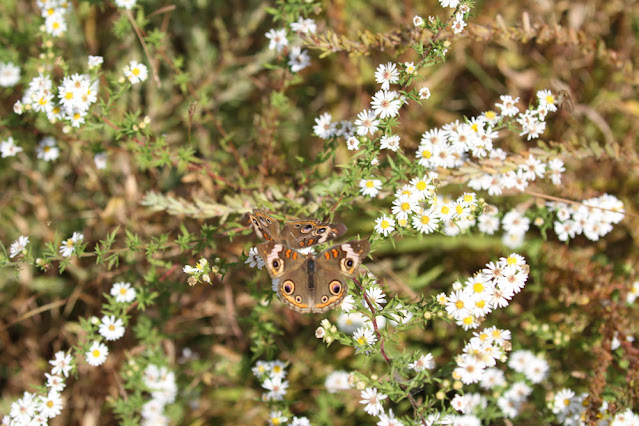 Gregg took photos of the pair. 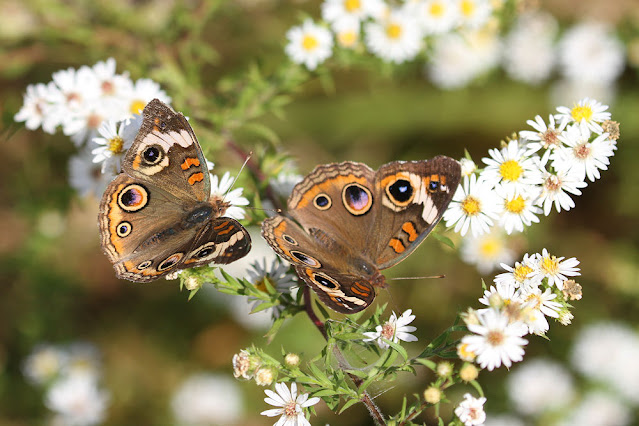 I couldn't tear myself away and took several single shots.  It has been a rare sighting for me this past summer.  I was very happy when I spotted them. 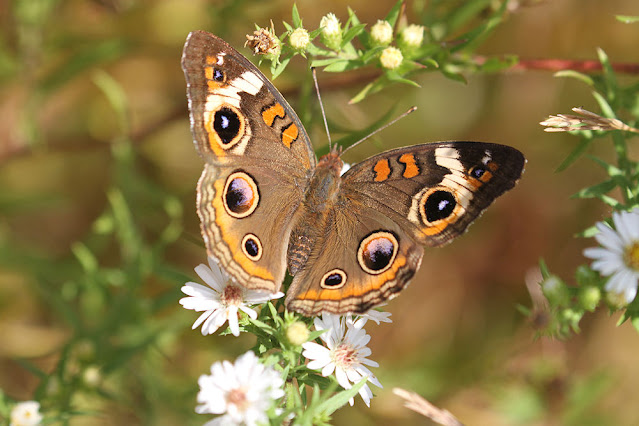 Named for its conspicuous target-shaped eyespots, the common buckeye, Junonia coenia Hübner, is one of the most distinctive and readily-identifiable North American butterflies. 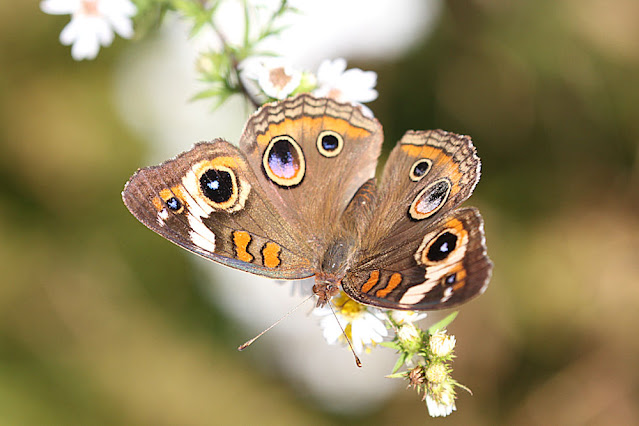 The common buckeye is a resident across the southern United States and much of Mexico, and regularly expands its range northward each year to temporarily colonize much of the U.S., occasionally reaching southern Canada. Starting in late summer and continuing through fall, huge numbers of adults migrate southward into peninsular Florida, where the adults overwinter.  There is a very interesting article that you can read here, that also shows you photos of a microscopic view of their wings if you scroll down. 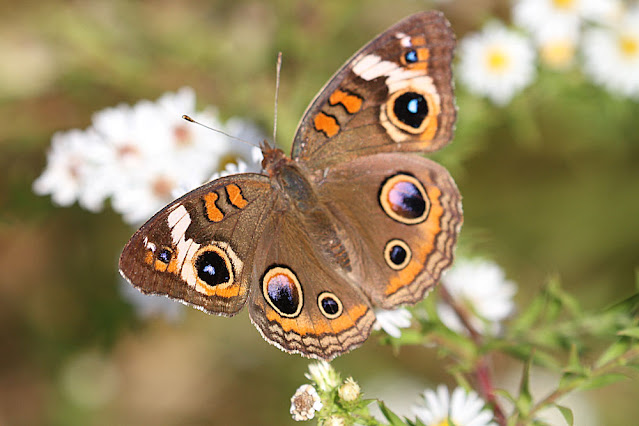 The brightly-colored eyespots are evolution's gift to scare away their predators.  The adult lifespan is 6 to 20 days, and during that time its food is the nectar of flowers such as tickweed sunflower, aster, gumweed, knapweed and chicory. 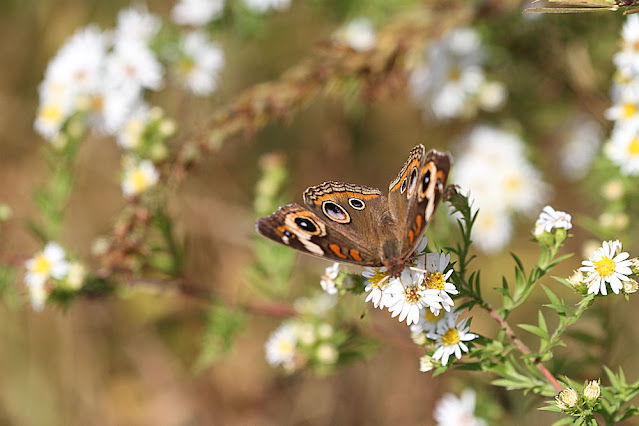 In the next photo I found this one on the same flowers nearby.  I didn't take a very sharp one.  It fluttered away soon after.  The closest I came to an ID was at this link, which said it was a white M. Hairstreak.  I haven't come across it before, or its name.  Hopefully someone out there will be able to confirm the ID, like last time.  I am always very grateful to my blogging friends who share more knowledge than I have. 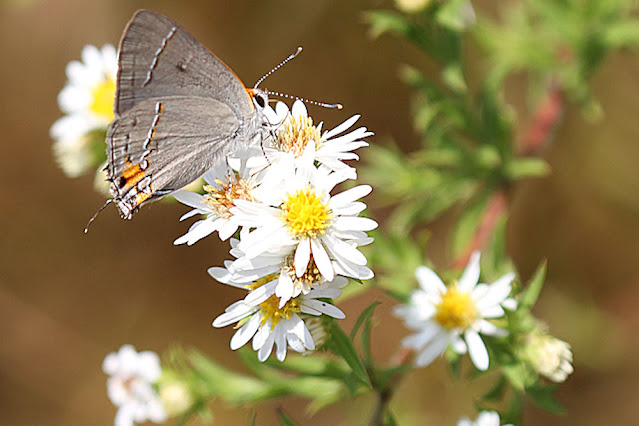 Gregg walks on ahead of me. I am lollygagging as usual, taking photos of river snails left behind by the tide. 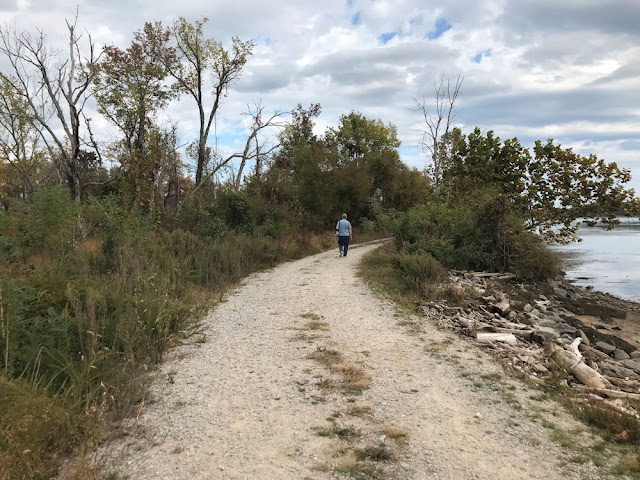 The information I found about them online was fascinating.  Feel free to fast forward!  They are called Mystery Snails.  It is said they got their name from the fact that during spring they give birth to young, fully developed juveniles that suddenly and mysteriously appear, while most other snails lay eggs.  They are the largest fresh water snails in the region, and can grow up to 3 inches. 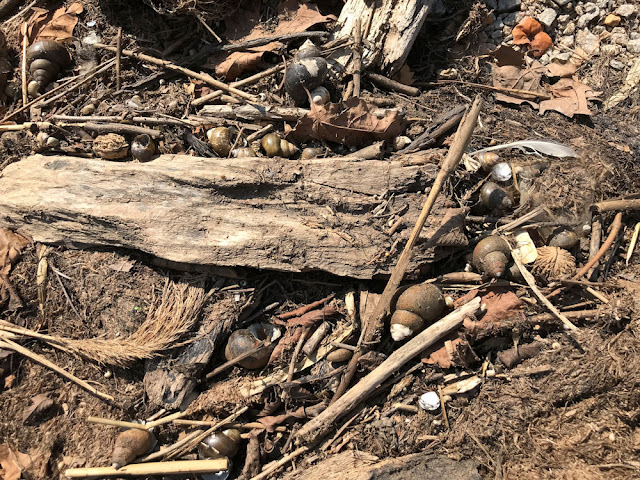 These snails can close their shells with something akin to a trap door, and survive out of the water for as long as a month. The snails feed on the algae growing on the river bottom, yet they excrete very little of the pollutants phosphorus and ammonium.  In their tissue the snails concentrate spilled oil and other toxins, a trait that makes them potentially valuable as tipsters on pollution.  When water temperatures rise above 59 degrees, a female snail starts giving birth to quarter-inch-long juvenile snails, a hundred at a time.  If pressured by predators she can reproduce at twice the normal rate. 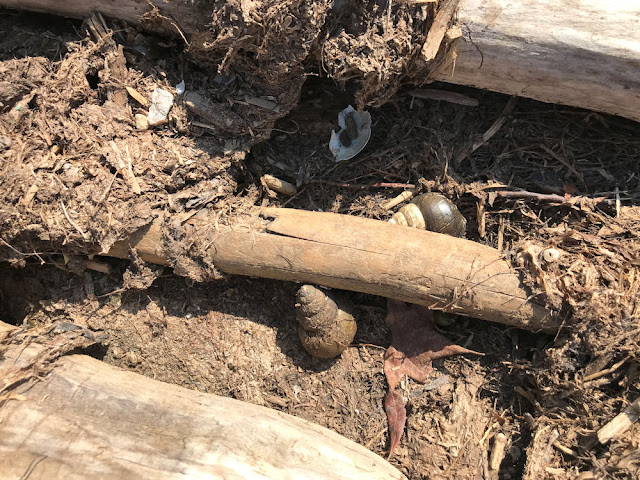 Females live for about five years, males for three.  They retreat to deep waters for the winter where they hibernate in the mud.  They were introduced by merchants and sailors to the West Coast in the 1890s, for the Asian food markets.  They are native to Burma, Thailand, South Vietnam, China, Korea, the Phillipines and Java. By 1911 the snails had escaped to California irrigation ditches.

Later they were introduced in at least 27 states, especially in the northeast and the Great Lakes region, and now can be found in the Potomac River.  Demands for food, aquarium and water-garden markets helped distribute the snails across the country.  By 1960 mystery snails had found a haven in the Potomac River at Alexandria. 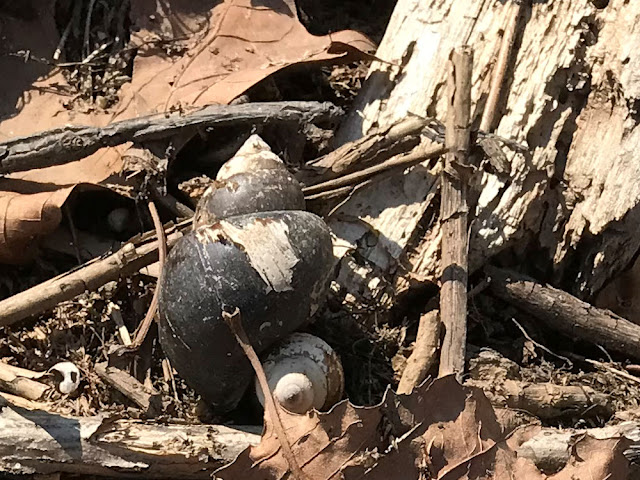 More information than is needed I am sure for this blog post, but I wanted to add this as I find it fascinating and always want a record of everything that peaks my curiosity. 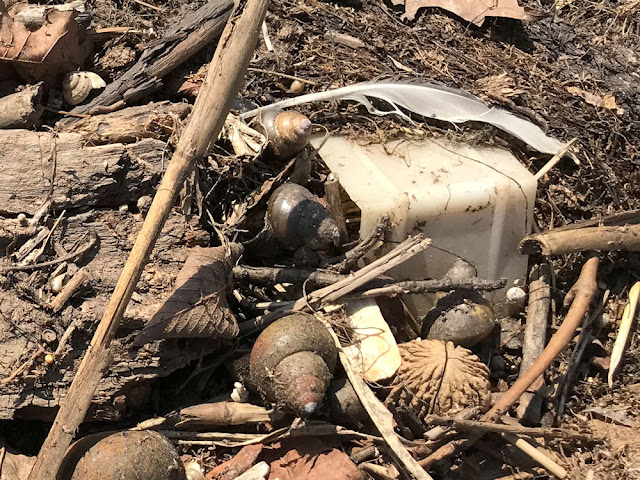 Sadly the beach along the river is littered with plastic bottles and other debris that is washed ashore from all over.  I read on someone's blog that each time they visit this area, they take along a rubbish bag.  I thought what a good idea!  I know it seems that one person can't do much, but the next time we took a walk there I would like to bring along our own.  To my mind every little helps and I would feel a whole lot better doing my small part.

So, that's it for today.  I will be sharing Part 3 next time.

Thanks so much for visiting and I hope your day is a great one. 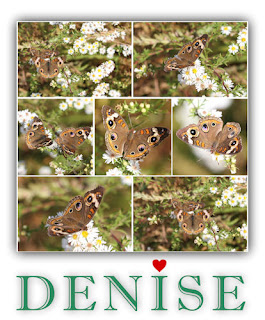