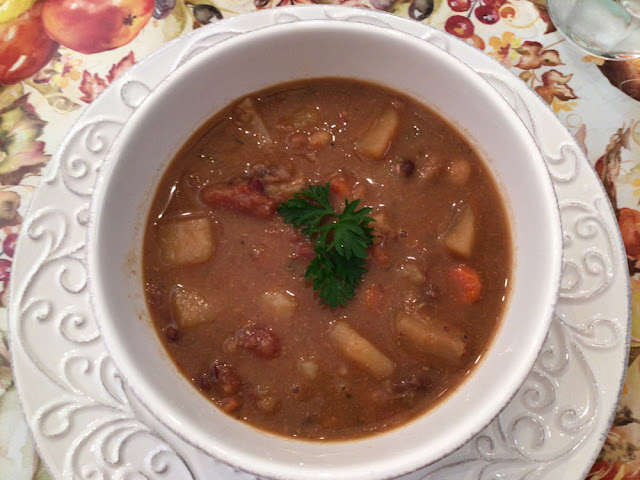 Not so long ago I was at a farmer's market and I picked up a 13-bean soup mix.  We wanted a vegetarian meal, and I found this one at Herbivore's Kitchen hosted by Kate.  Her recipe is actually vegan and can be found at this link. I always recommend looking at the original.  All Kate's recipes look delicious, as was this one.  Kate's instructions are for what she used, a Kitchen Aid Multi Cooker, which you can see here at Amazon. I don’t have one of these, but do have a slow-cooker.  However, I used my old tried and true Dutch Oven instead, cooking the recipe the old-fashioned way, on the stovetop.  I brought things to a boil and simmered until everything was cooked through.

2 carrots washed and sliced into 1/4" pieces

salt and pepper to taste 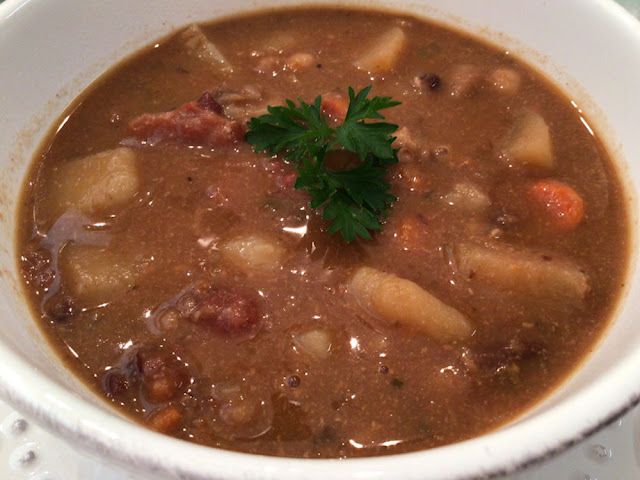 Add the onions and salt and sauté, covered, for about 10 minutes, until the onions become translucent.

Continue to cook the onions uncovered on low heat for another 10-15 minutes until they are nicely browned, caramelized.  Stir occasionally.

Increase the heat to medium-high and add the rosemary, thyme and oregano.

Sauté until herbs are fragrant, about 1-2 minutes.

Bring soup to a boil, then reduce to a simmer by setting the multi-cooker on slow-cook low for 4-5 hours. The soup is done when the beans and potatoes are soft.

This is where I brought the soup to a boil after preparing everything as directed in a Dutch Oven, and then put on simmer for two to three hours.  I checked at two hours and wasn’t sure if the beans were cooked enough, so I tried it for an extra hour.  You can be the judge on how tender you want both veggies and beans but check every now and again.  I ended up using regular potatoes, the red ones. They were perfectly cooked and not at all mushy.

Check periodically as you may need to add water to the broth.

Use an immersion blender if you would like a more blended, thicker consistency.

Season with salt and pepper to taste. 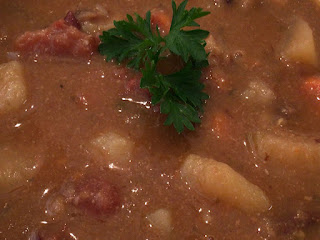 The changes I made:

I used a large Dutch Oven instead of the multi-cooker.

I thought I had coconut milk in the pantry but did not.  Instead, I used the same amount of 2% milk.  If you want to keep this recipe vegan, make sure you have the coconut milk in stock.

I substituted white potatoes instead of the sweet potato, and added extra.  Gregg isn’t a sweet potato fan as he finds them too sweet and prefers a more savory taste.  I only mention this just in case you feel the same way.  This soup still came out a 10 out of  10.

I also added extra carrots and celery, plus more broth. It gave us extra servings and we have been enjoying it for a couple of days now.  We will eat the last of it tomorrow.  The flavor of the soup gets better and better.

I will also add another can of diced tomatoes as we both enjoy them.

I was going to emulsify the soup before serving, but it looked so good without, and decided not to.  If there is any one in the family not too keen on beans or certain veggies, emulsifying makes good sense.

Next time I will soak the beans overnight to reduce the cooking time.  I usually do but often recipes are decided on impulse and I use what I have.

The next day I made cornbread.  Crusty rolls would also be great

For a bit of fun, below you can see the biggest potato my dear other half brought home as a joke.  I gave the right reaction. I think a “Good grief!” was in there somewhere.   He also said the cashier showed surprise. My mother used to buy these huge potatoes from our local greengrocer.  It’s been years since I saw their like.  This one was as big as my foot and I turned it into a still life of sorts, along with my grumpy bear mug and the unopened packet of 13-bean soup mix. Grumpy Bear was not amused as I did not put this potato into our bean soup.  It will be used shortly in another meal.  Anyone have any favorite recipes using potatoes? 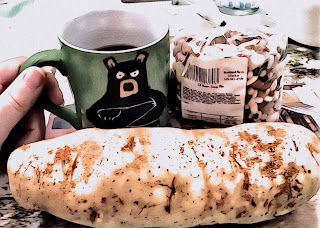 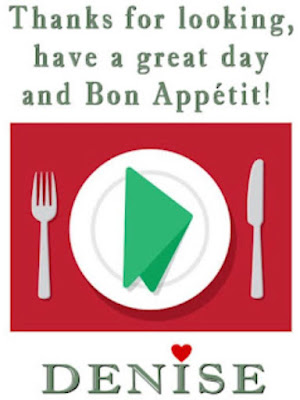