I was more than happy to stay home and potter around here for a few hours, but I enjoyed the photos they sent me.  I thought I would share them here today. 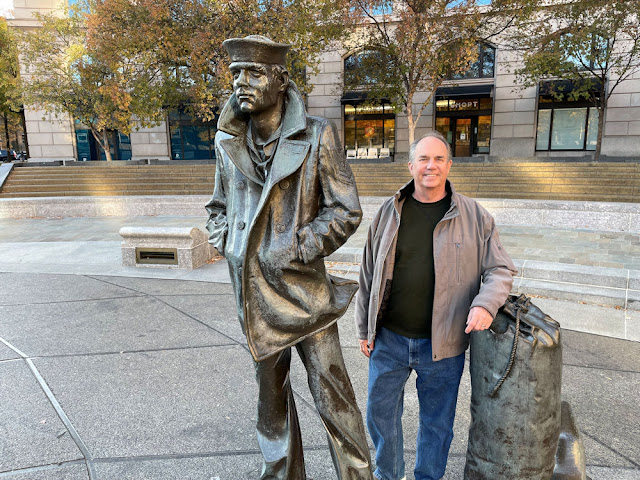 Gregg is standing next to The Lone Sailor Statue.  You can read its history at this link. It was sculpted by Stanley Bleifeld who was an enlisted man in the Navy during World War II.  Mr. Bleifeld was assigned to illustrate Navy training manuals. Standing at 7 feet tall, there are 17 other identical statues in other locations, and you can see those in photographs if you go to this website.  The one here is standing in front of The United States Navy Memorial at 701 Pennsylvania Avenue (7th and Pennsylvania Ave) NW, Washington, DC 20004, and is the original.  It arrived on October 13th, 1987 for the celebration of the 212th birthday of the United States Navy. 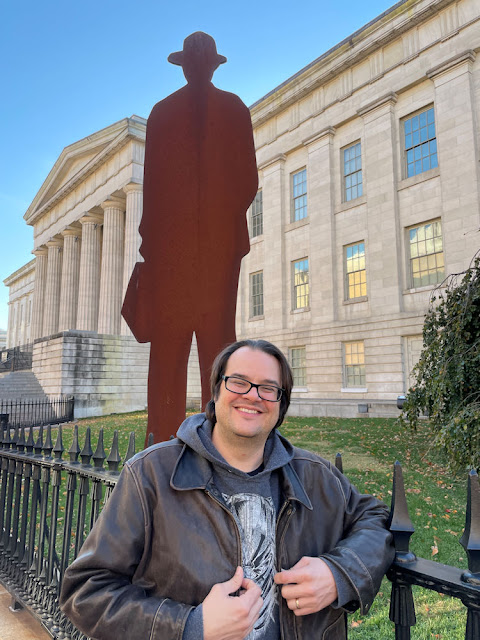 Our son Brad is standing in front of this interesting sculpture, but unfortunately he couldn't find a marker identifying it, and searches I have done have proved fruitless.  Update 11-20-21:  Thank you Anni at Hootin' Anni's Day Trippin' for ID'ing the statue above.  It is appropriately called "Man with Briefcase."  I found a website that describes it: "Jonathan Borofsky 1987-1988, Cor-Ten steel."  Also, "the artist was inspired in 1979 by a newspaper advertisement for men's suits and subsequently made this archetypal office worker a recurring theme in his work."  You can read more and see photos at this website. 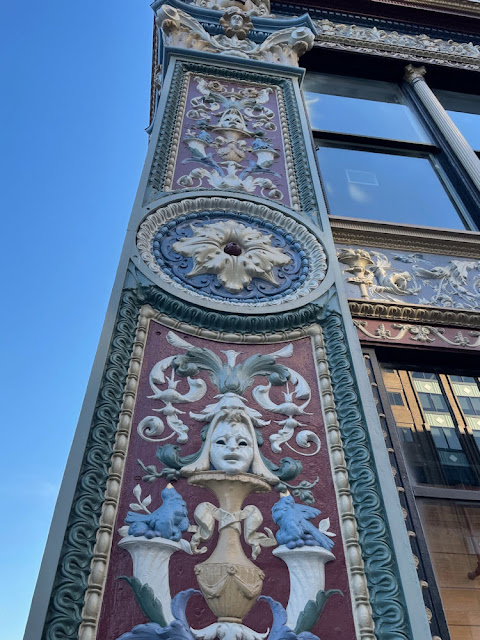 The above photo shows the decorative touches on one of the buildings, and the explanation for that follows. 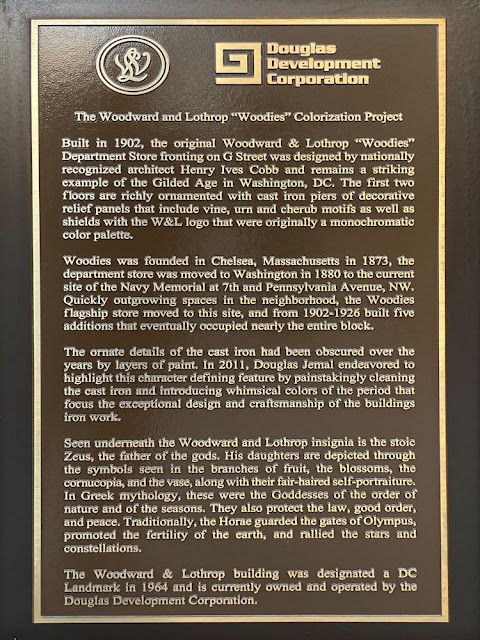 Here we can see one of the many electric bicycle rentals.  The lads said they 'were all over the place'. 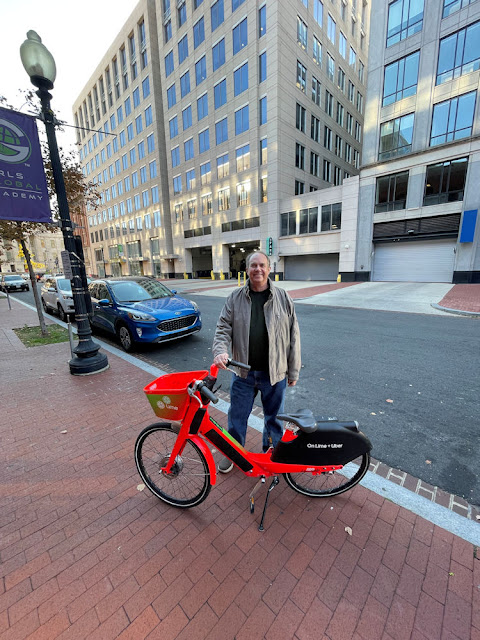 The electric bicycle Gregg is standing next to was left by someone who had made good use of it, not placed on any stand, just on the street. The company sends out a van to pick them up and do maintenance when needed.  We are assuming they use GPS to find it?  This website from the actual company tells you more about the bike and where you can rent them.  All rental bikes, still more regular ones than electric I believe, were taken off the streets during the pandemic, but they seem to be making a comeback. 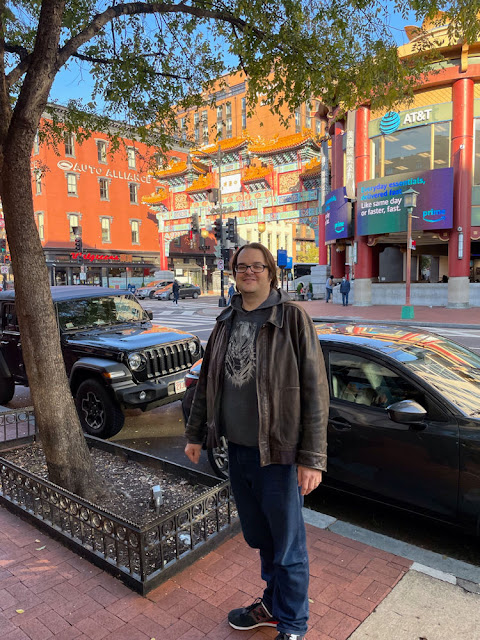 Brad is standing near the Chinatown entrance which you can see above his head. That large gate is beautiful and a cultural work of art.  Here you can read about its history.  I haven't been here in several years, but it is a wonderful area to walk through and I would like to do it again. 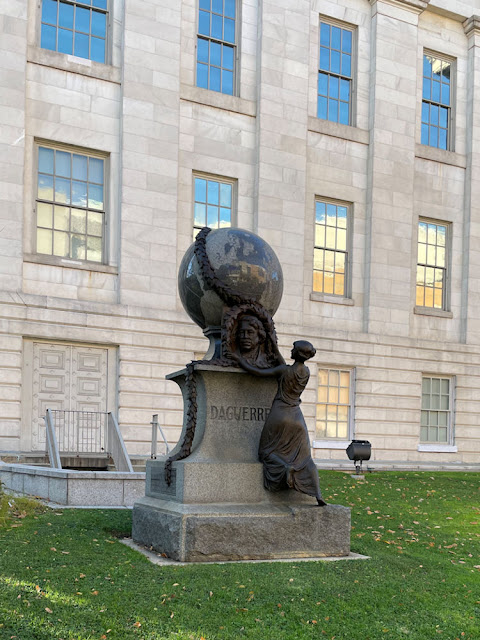 Another interesting sculpture with an explanation below. 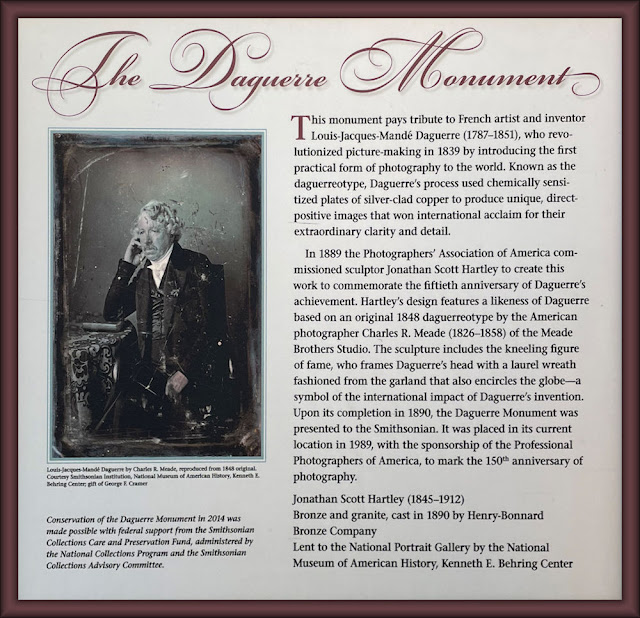 Next is the Hotel Harrington. 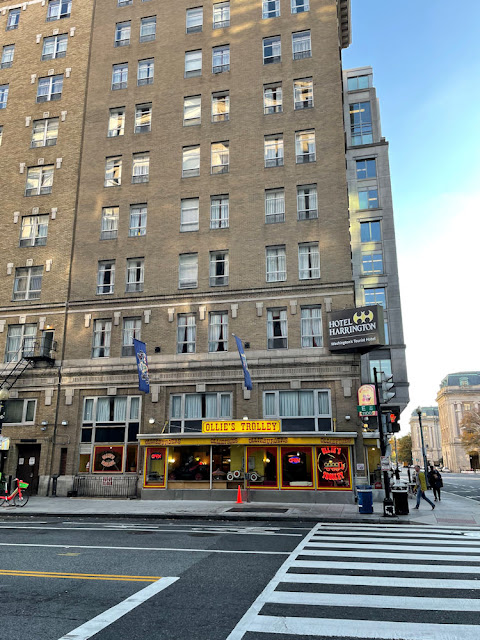 The restaurant you can see on street level is advertised as Ollie's Trolley: An Old School DC Burger Mainstay.  The article says that it was started in the 1930s on North Collins Avenue in North Miami Beach by Oliver Gleichenhaus. He was the owner and chef and his girlfriend was a waitress. If anyone asked for ketchup, he would throw them out of the restaurant and use profanity. If anyone wanted their burger cooked any way other than medium rare, he would throw them out of the restaurant and use profanity.  And now you know about the original owner of this chain and if you go to the link you can read its entire history.  The story did make me smile.  I would have been thrown out asking for ketchup, and another secret I keep to myself usually, I don't like the mustard they put on burgers over here (I do like Colemans and Dijon), but would much rather have ketchup on my burgers.  Ah well, sorry if I disappointed you but we like what we like and don't what we don't.  'Nuff said! 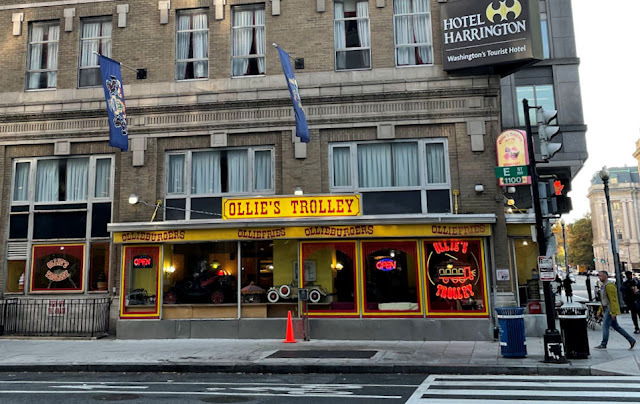 Getting back to the hotel as I digress as usual, it is in a good location as it is steps from Ford's Theater (where Abraham Lincoln was assassinated, and if you click on its name you can read other interesting information).
It is 8 minutes by foot to Capital One Arena. This is home to the NBA's Washington Wizards (basketball for those of you who are overseas), but it also holds many other events.  There will be one performer who is very much my cup of tea, Andrea Bocelli in December.  I would love to see him, but am not ready for a large crowd just yet.
Hotel Harrington is also 0.9 miles from The White House and 0.9 miles from The Washington Monument.  I know nothing about the hotel itself and if people are thinking of coming to DC and this sounds inviting, it would be a good idea to look at reviews online beforehand.
Gregg took this photo as they left Washington DC (waiting at a traffic light).  The Washington Monument was bathed in a golden glow at sunset. 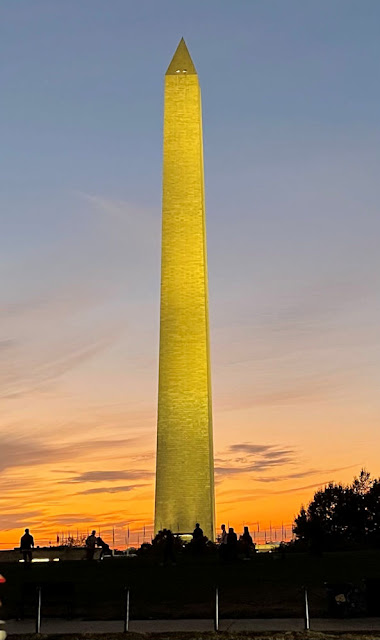 And that's all from Washington DC.  My thanks to husband and son for letting me share these photos. 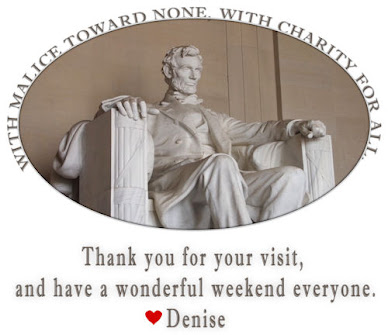 (The lines I used for the top of my logo is from a speech given by Abraham Lincoln.  It was taken from the last paragraph of his Second Inaugural Address.  If interested in seeing that speech you can find it here.  The photograph in my logo came from Pixabay.com)
Posted by DeniseinVA at 5:19 PM