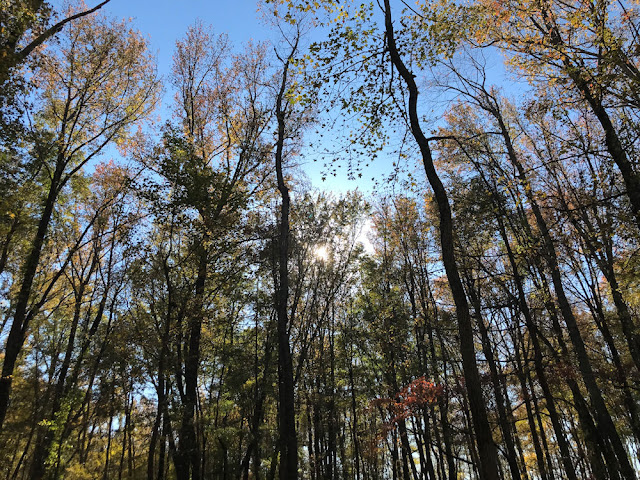 I usually wait until the end to say this, but if you would like to see other posts from Huntley Meadows Park, you can either type its name in the subject/search box at the top left of this page, or go to the label below this post.  Oodles and oodles of posts from here.  We have been visiting for years.  Lots of wildlife photos, as well as flowers, plants and trees.  We never know what we are going to see as there is always something different, which you have no doubt realized when visiting your favorite places. 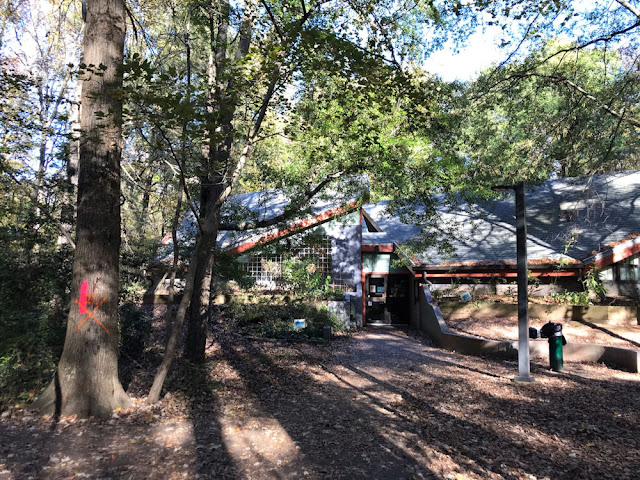 In the above photo you can see their visitor center.  On the left is a tree marked for cutting down. 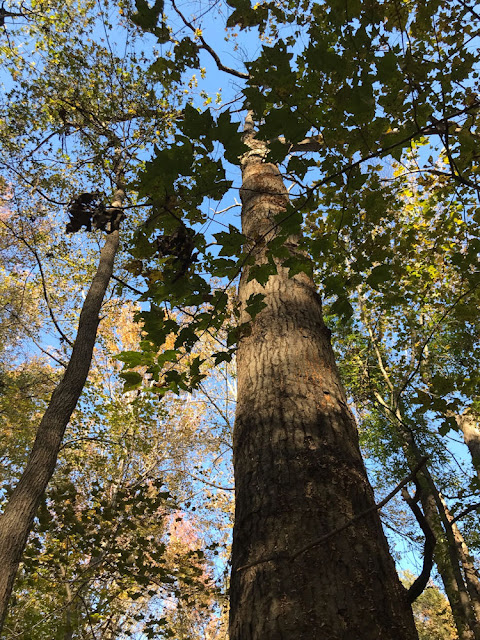 It is about half a mile to walk to the wetlands through the wood... 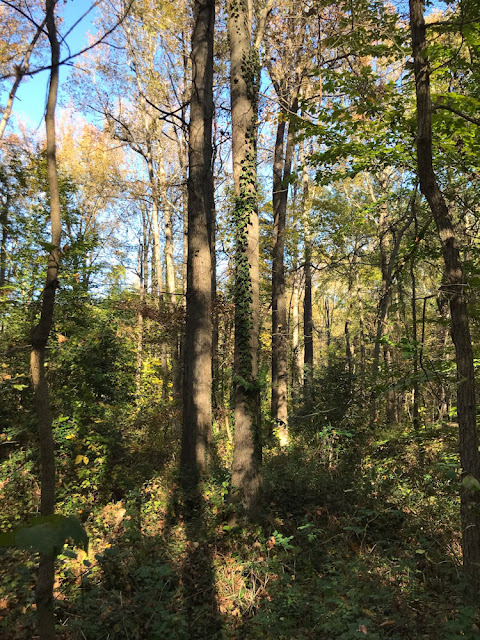 and is a very pleasant trail that is nice and flat. Benches along the way too. 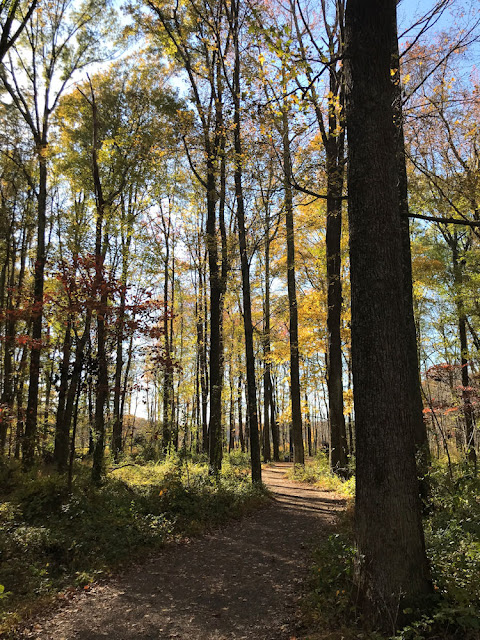 On one of the markers showing how far along on the trail we are, we spotted this, a Woolly Bear Caterpillar.  It becomes the Isabella Tiger Moth (Pyrrharctia isabella).  According to this link, it says, "The Isabella Tiger moth can be found in many cold regions, including the Arctic. The banded woolly bear larva emerges from the egg in the fall and overwinters in its caterpillar form, when it literally freezes solid" and "It survives being frozen by producing a cryoprotectant in its tissues.  In the spring it thaws."  If curious you can click on this link for the explanation of the word 'cryoprotectant'.  Can you imagine the scientists trying to unlock this phenomena?  Absolutely fascinating! 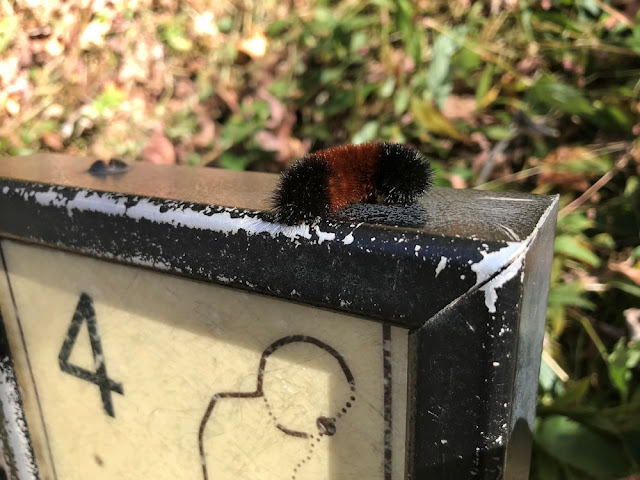 By observing the Woolly bear caterpillars, also called woolly worms, there are those who believe we can predict the winter weather by looking at them.  If their rusty band is wide, then it will be a mild winter. The more black there is, the more severe the winter. 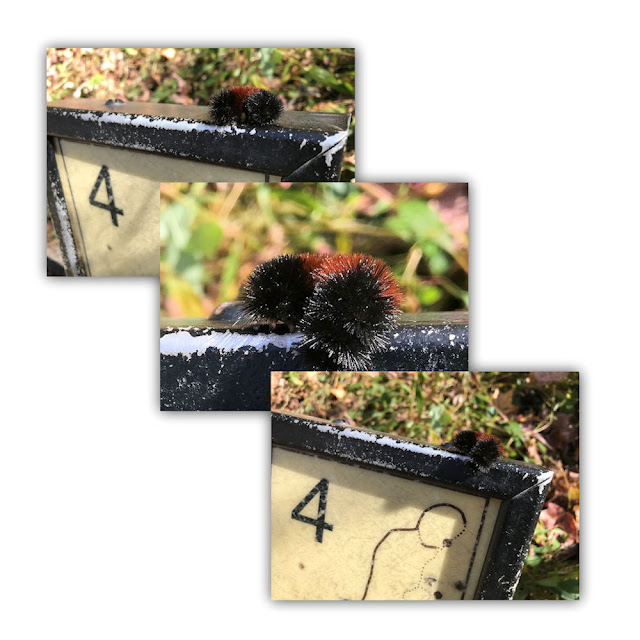 Whether there is any truth to this I have no clue but the info can be found in many places.  I remember reading about this years ago but I needed a refresher, and I found more at this website.  I will find my photo again at the onset of next Spring.  I wouldn't hazard a guess with this one what our winter will be like, but it will be fun to look later, just for curiosity's sake.  Cute little thing! 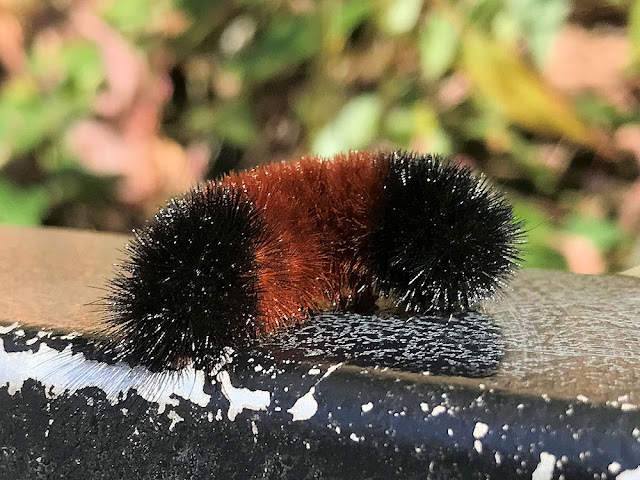 We have reached the walkway that takes us through the wetlands.  There are several signs along the way.  This one gives us the do's and don'ts, for the benefit of wildlife and preservation of the area. 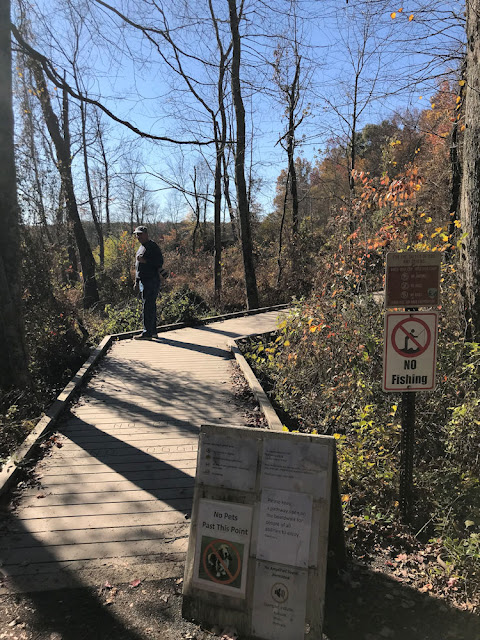 Another board with information on what we might see.  There are others at intervals. 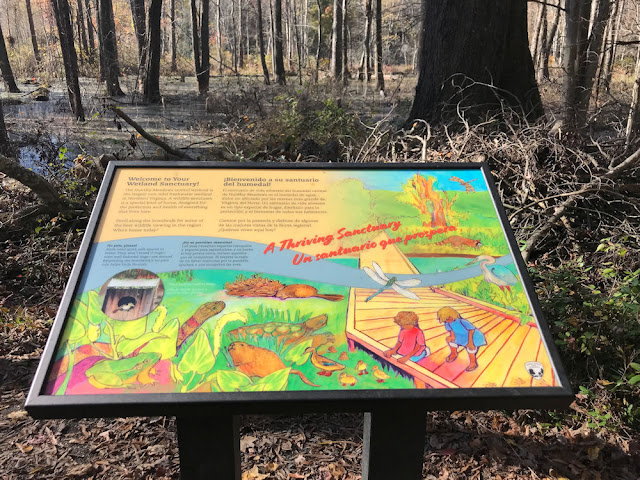 The water level is higher than the last time we were here, but this all seems to fit in with the nature of things. 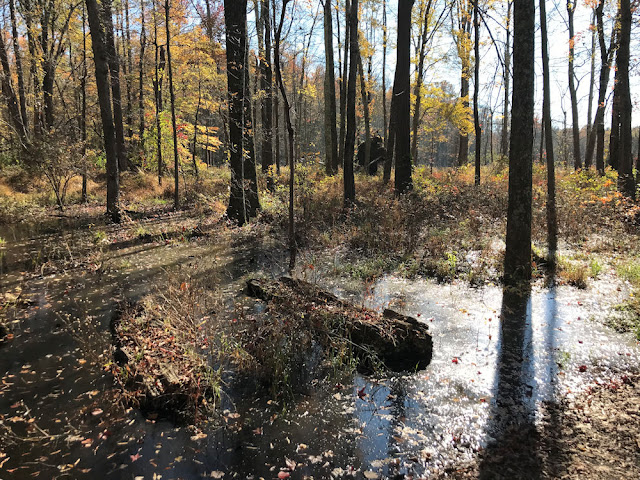 Advice from a Wetland
Make a splash,
Take time to reflect,
Listen to nature,
'Reed' more,
Be green,
Don't get bogged down,
What's the rush? 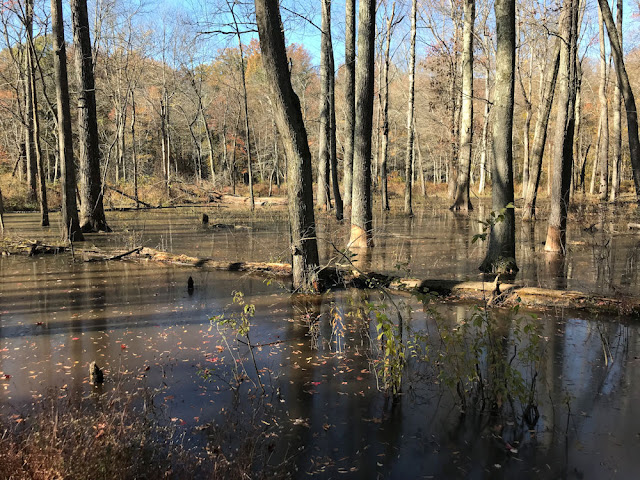 No rushing here, everyone seems to go at nature's pace.  For a Monday their were lots of cars in the parking lot, with plenty of spaces still available.  We passed several people but it wasn't crowded, and the weather was gorgeous!  I dressed in layers thinking it was going to be chilly like the day before.  I should have looked at the weather forecast.  It was 72 degrees Fahrenheit that day. 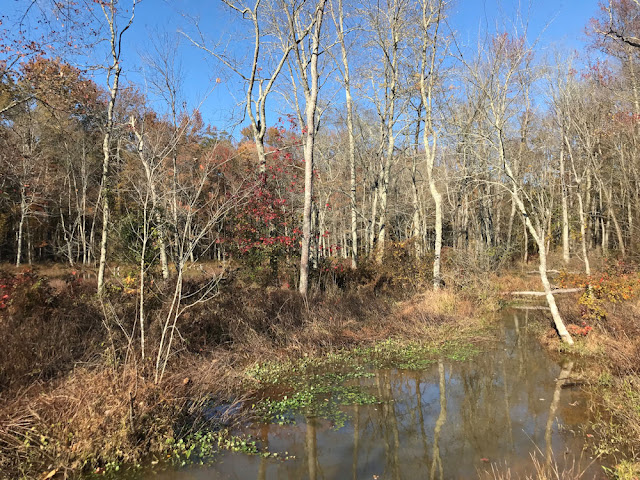 There was a swarm of what I thought were ladybugs.  Both of us had several land on us.  I counted 10 on me, and about as many on Gregg.  I have never seen so many at one time, and later read that they were not ladybugs.  They have been found in other areas too.  You can read about them here.  In the next photo you can see one.  It landed on Gregg's jeans and it was the only photo that came out without being blurred.  The previous link has a photo that shows you the difference between these and ladybugs.  It's in how many spots they have, more than the ladybug.  There is also an “M” design on its head. The ladybug 🐞 doesn’t have one. 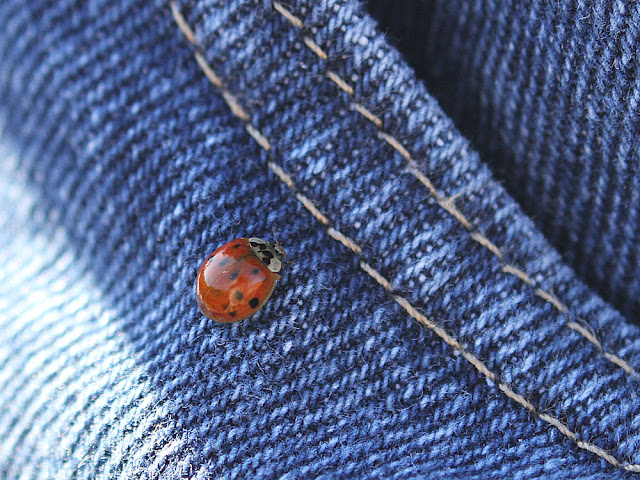 We came across a line of geese on a log.  They were busy preening themselves. 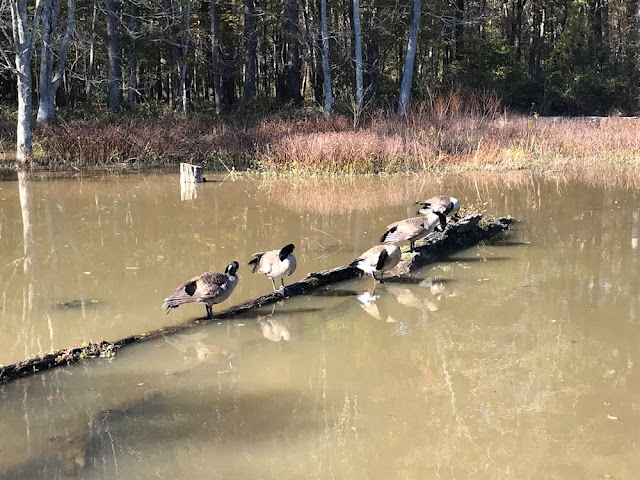 One looked up but they were too busy to pay attention... 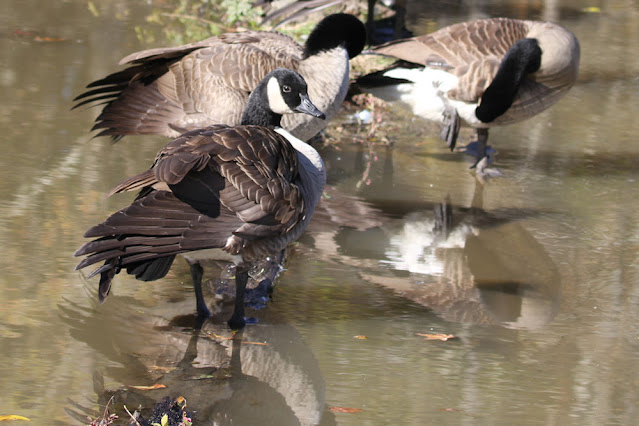 until some other geese landed just across the way.  I didn't get any photos of them.  Our crew gave them what-for!  They were very noisy for several minutes until the usurpers left and they went back to preening, and we left them smiling, having been fully entertained. 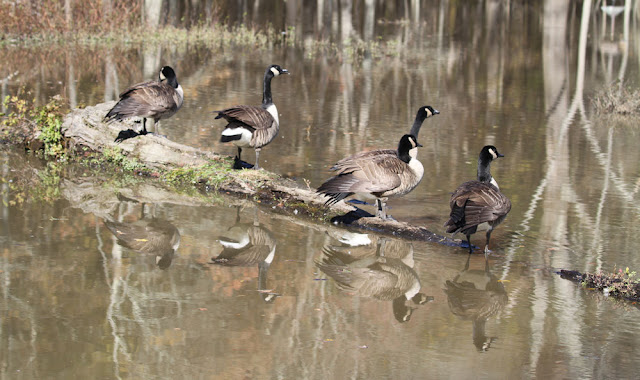 And then there were the frogs and other critters, but I will leave those until next time.
Thanks for going with us on another walk.  I hope your day is a great one. 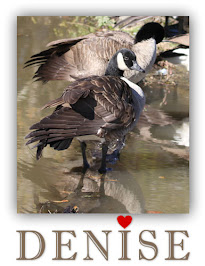