There are several Adirondack chairs throughout the garden, in addition to the benches.  I like the look of them very much.  They were originally called the Westport Chair and there is an interesting history of its origins at this link. 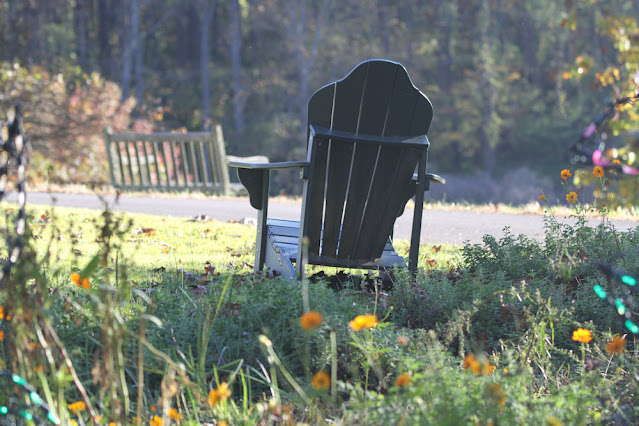 Gregg takes a lot of photos that I share and there are several in these garden posts.  He spotted the bird in the tree, which turned out to be an Eastern Bluebird. Bluebirds are found throughout North America including the Eastern, Western and Mountain Bluebirds. 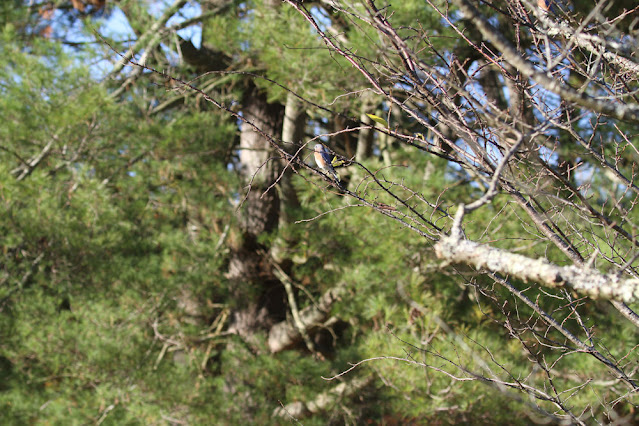 Nesting occurs from March through August. Only the female incubates the 4-6 eggs which she maintains at a temperature of 98 to 100ºF.  All bluebirds are cavity nesters and will use an artificial nest box. Habitat and nest cavities had been disappearing for many years, but bluebirds have made an incredible come back due to thousands of bluebird nest boxes being installed across the country. 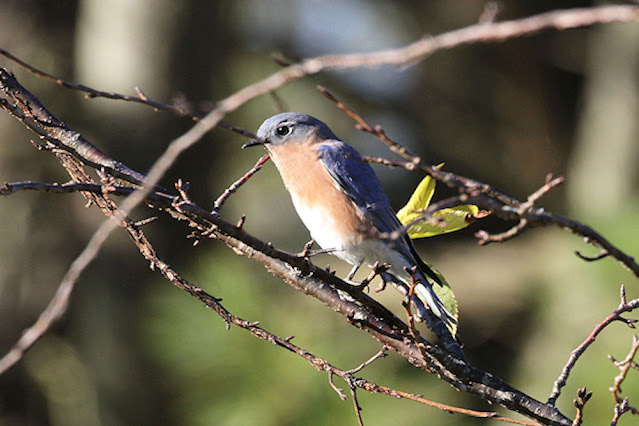 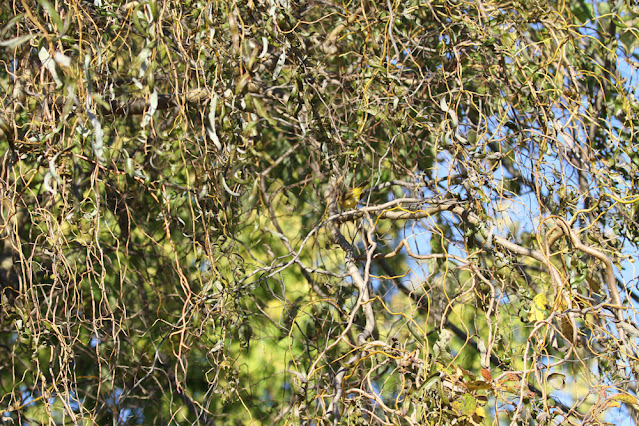 The American Goldfinch is the only finch species that molt twice a year. The first time is in the spring when the males get their bright yellow feathers, and the second is at the end of summer when the darker feathers grow in.  A female Goldfinch typically lays between 2 to 7 eggs. The eggs are either greenish-blue or light blue. It takes twelve days for the eggs to hatch, and another 12 days before the hatchlings fledge. 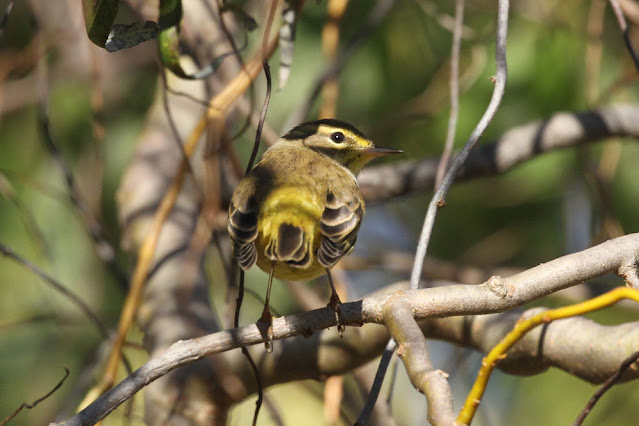 The following shows the Milkweed plant with its pod split exposing the seeds.  You can read about it at this link. 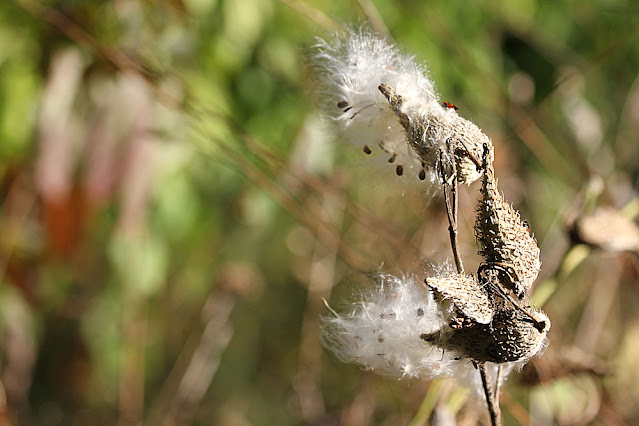 The seeds are equipped with hairy filaments which facilitate dispersal by wind. 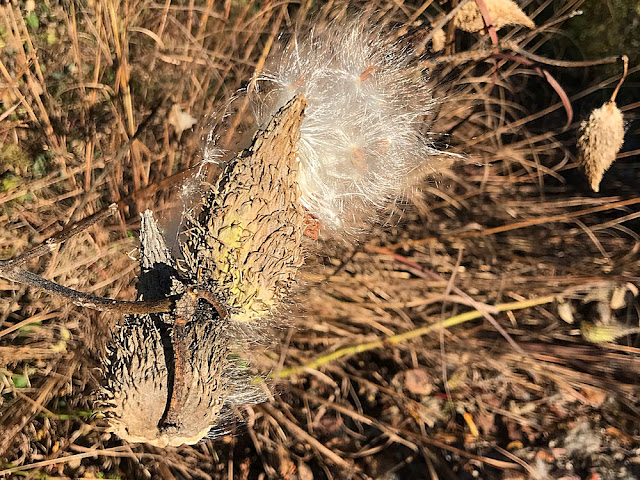 During windy days, seeds often travel 25 to 100 feet away from the mother plant. 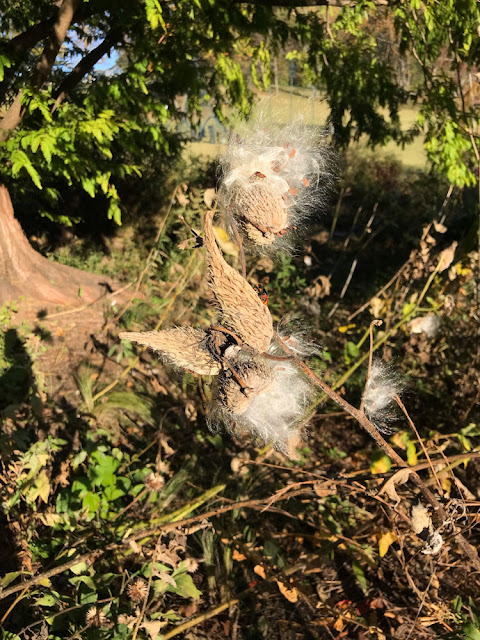 When Milkweed splits open they reveal 50-100 seeds, each with a white, fluffy coma ("parachute") that allows wind dispersal, as mentioned above. 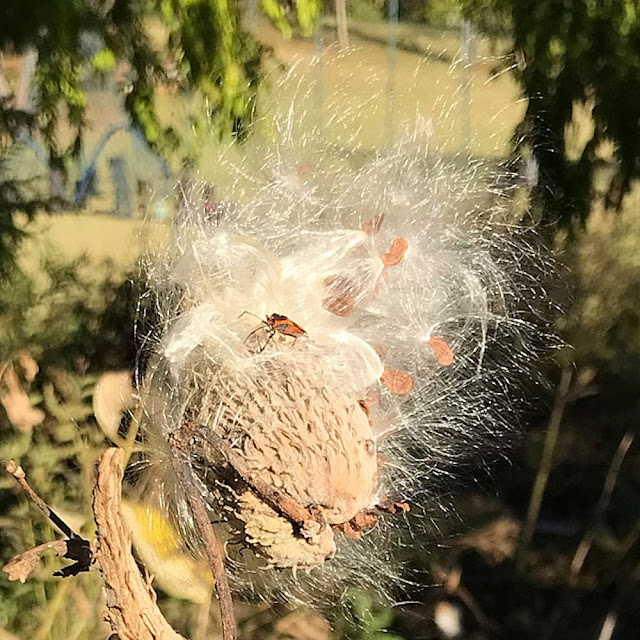 Common milkweed is Nature's mega food market for insects. Over 450 insects are known to feed on some portion of the plant, and must not forget the plant's importance to the Monarch Butterfly.  The ones I found on this one are called Milkweed Bugs (Oncopeltus fasciatus).  If you click on this link it will take you to a page with more information. 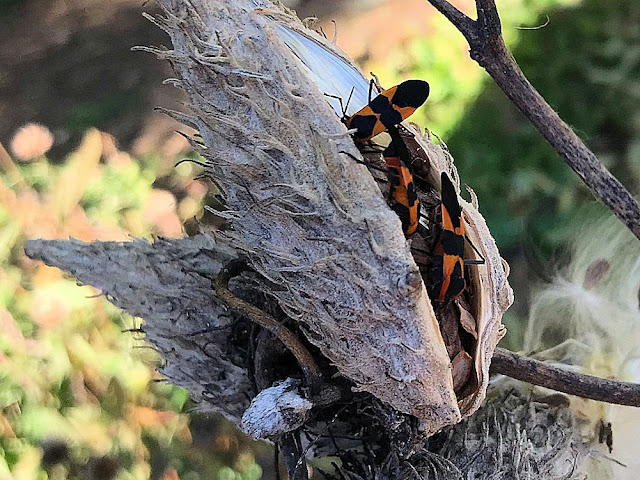 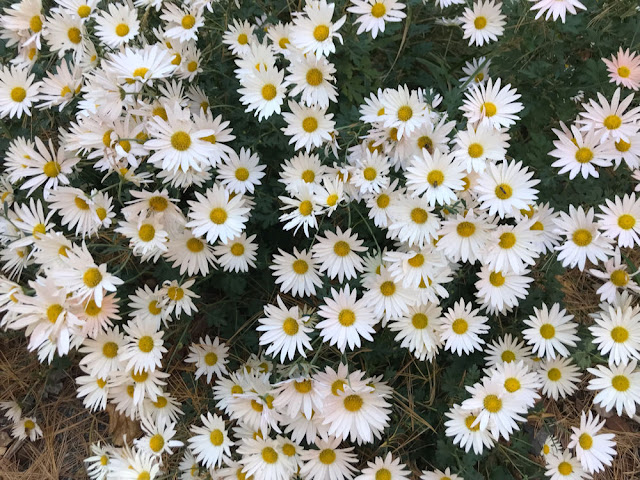 Oxeye daisy is a small perennial and our largest native member of the daisy family. It is a widespread flowering plant native to Europe and the temperate regions of Asia, and an introduced plant to North America, Australia and New Zealand. 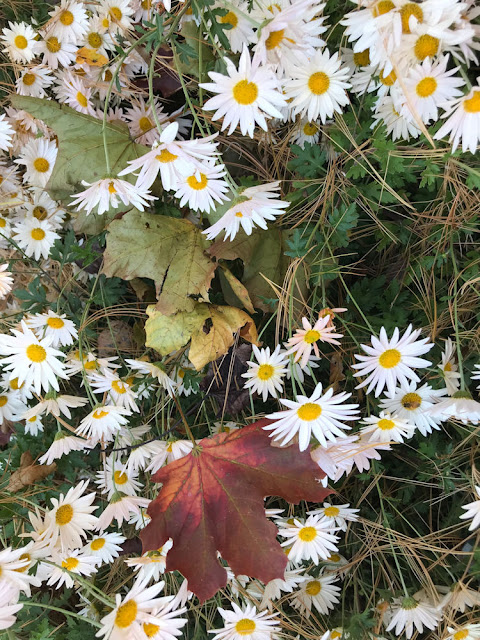 These are called the Aromatic aster, botanical name Symphyotrichum oblongifolium.  Its other names are Fall aster, Oblong-leaf aster and Oblong-leaved aster.  The Armomatic aster is native to parts of eastern and central United States. 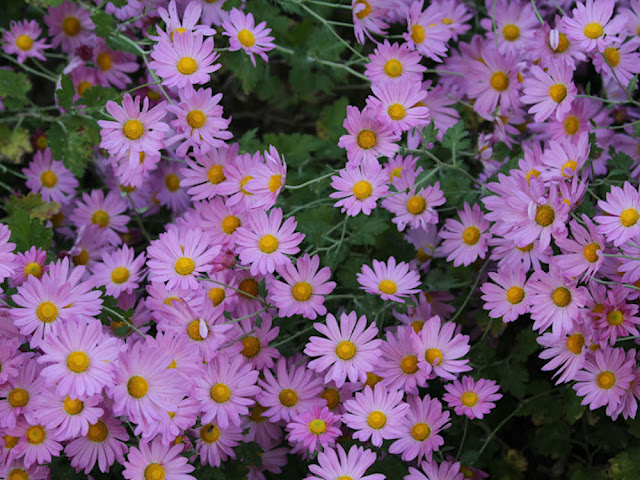 The plant below is called the Hair-awn muhly, botanical name Muhlenbergia capillaris.  Also known as Hairy-awn muhly, Muhly grass, Hair grass, Pink muhly and Gulf muhly.  It is a perennial, sedge-like plant.  It likes a lot of sunlight.  It attracts beneficial insect species and is also considered an excellent wildlife habitat plant that provides great cover. 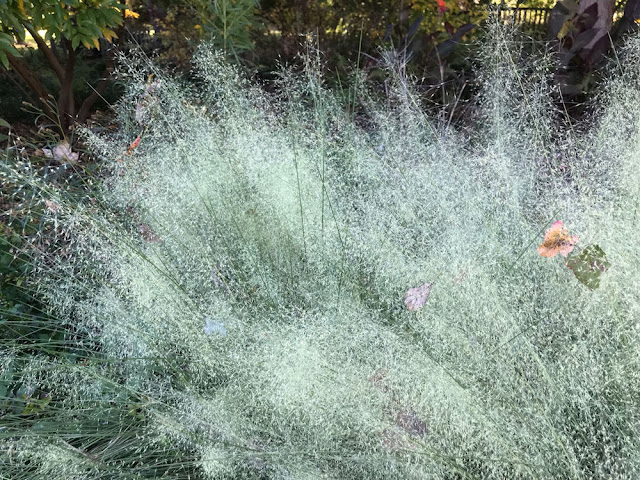 The grass was named after Heinrich Ludwig Muehlenberg (1753-1815), German educated Lutheran minister and first president of what is now Franklin and Marshall College, Lancaster, Pennsylvania. 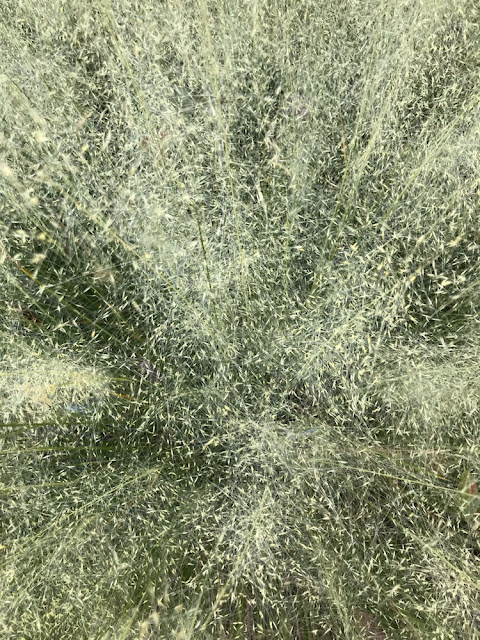 He was America's first outstanding botanist who published Index Flora Lancastriensis in 1785. 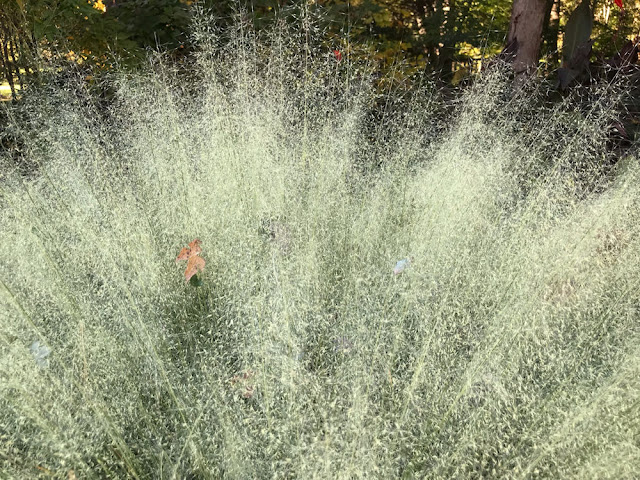 This pretty orange flower is the Sulfur cosmos botanical name Cosmos sulphureus.  Other names are Klondike cosmos, Yellow cosmos and Orange cosmos. It is native to Mexico, Central America and northern South America, and naturalized in other parts of North and South America, as well as Europe, Asia and Australia.  The flowers of all Cosmos attract birds and butterflies, including the Monarch butterfly.  You can read more at this link. 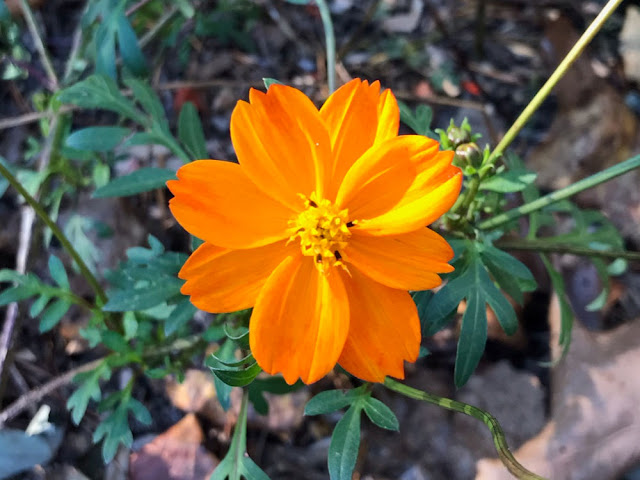 This is the dried leaf from thee Pin Oak, botanical name Swamp Spanish oak or Swamp oak.  My plant app told me "Your plant is dried out, suggesting it is dormant or dead."  It doesn't realize I see the beauty in dried leaves that I find on the ground, but I'm happy it identifies even these.  It is a deciduous tree native to North America.  The Pin Oak has favorable growing qualities and is one of the most common oak species used in landscaping. 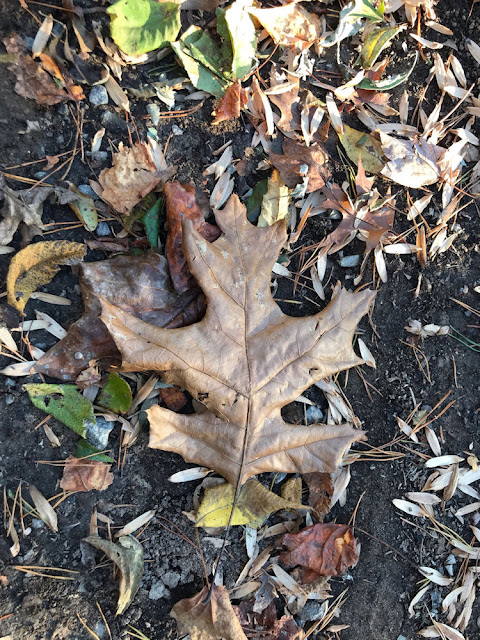 I saw several Common zinnias blooming but these were the only ones that were not totally past it.  The others were a little straggly.  Botanical name Zinnia elegans.  Also known as Zinnia, Elegant zinnia, Youth-and-age and Wild zinnia. The name was given to the plant in memory of another German botanist Johann Gotfried Zinn.  It also symbolizes friendship in the language of flowers.  You can learn more about it if you click on this link. 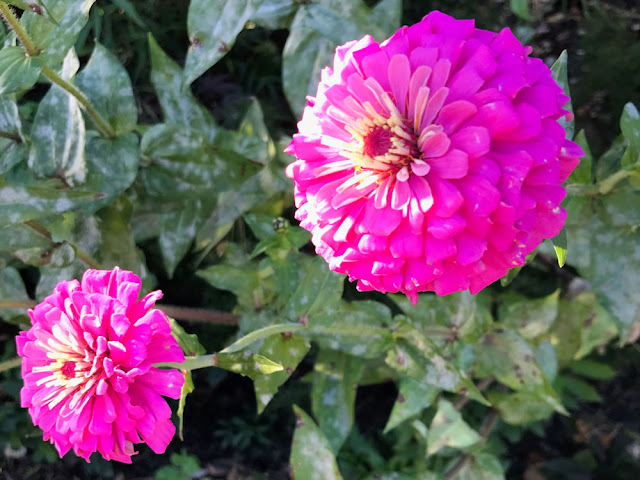 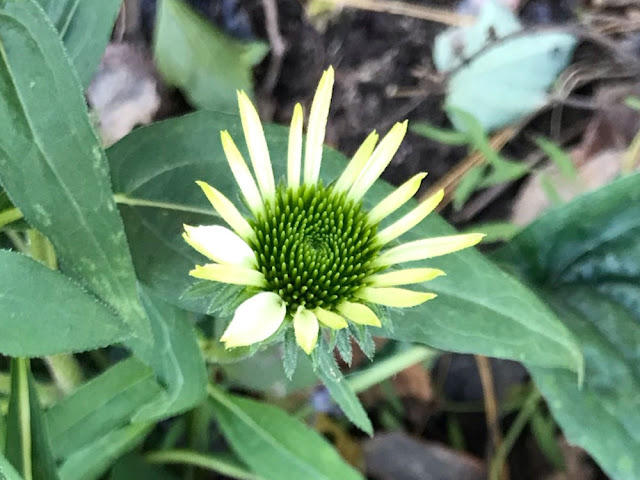 There is a very nice website called "Fun in Fairfax Virginia".  This link is about the garden. There is quite a lot of advertising but the photos are wonderful and will give you more insight into Meadowlark.

And last of all my dear little flying pig.  Did you know that The Flying Pig has origins in Greek mythology, legend and folklore?  The original flying pig was a winged boar named Chrysaor, the offspring of the Gorgon Medusa and the Greek sea god Poseidon.  The winged horse Pegasis was his brother.  And as for its meaning of following a story someone might tell you that you can't quite believe, followed by you perhaps saying, "and pigs might fly." I read, "Flying pigs appeared in print in the UK quite often throughout the rest of the 19th century. The Illustrated Times referred to them in an issue in August 1855: "...pigs might fly.  An elephant, too, might dance on the tight-rope."  Always amazes me what I can find online.

We started in the fairy garden and we are ending there as this little pig is keeping company with the remaining fairies.  I have known it for years.  The next time we meet, hopefully, will be when we come back for their Winter Walk of Lights.

In the meantime it hopes you have enjoyed your walk around the garden.  Thank you for joining us and have a great weekend. 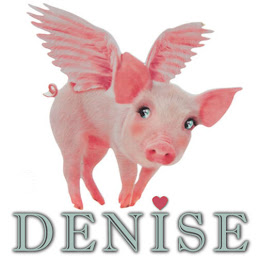