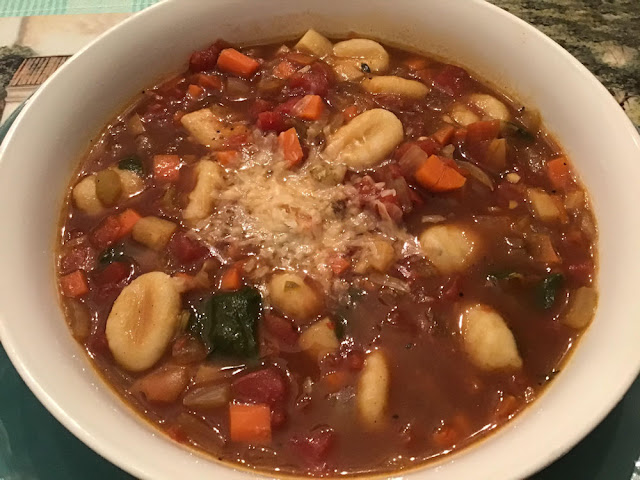 It is a little early for soup and I had it set up to post next month.  But truthfully I haven’t tried any new recipes this week.  It won’t be long before I will be making it again. Last time was in March

It was found at the Food Network and you can see the original recipe by Maria Russo here.  It was excellent!  I made a few changes, which I will tell you about at the end of the recipe.

Heat the olive oil in a large pot or Dutch oven over medium-high heat.

Add the celery, carrots, onion, 1/2 teaspoon salt and a few grinds of pepper.

Cook, stirring occasionally, until the vegetables soften, about 5 minutes.

Bring to a simmer, then reduce the heat to medium and cook until the vegetables are very tender, about 15 minutes.

Stir in the escarole and cook until wilted, about 3 minutes; season with salt and pepper.

Stir in the gnocchi and cook, gently stirring occasionally, until tender, about 3 minutes.

Ladle the soup into bowls; top with the grated parmesan and drizzle with olive oil.  I put parsley on the top of mine the next day.  We had enough for three meals and it got better each time we tasted it. 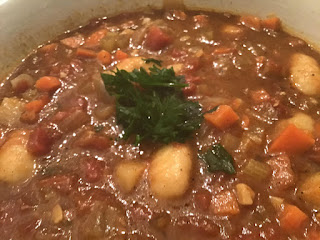 I had a bag of fresh spinach in the fridge and substituted it for the escarole.

We doubled up on this recipe so that we would have leftovers.  It tastes even better the next day.

I added a larger rind of Parmesan than called for.  I have used this in other recipes and we like to eat it on a side plate.  I cut it into tiny pieces, as it is a bit chewy, but we love that along with the taste.

Instead of the water I had four cups of frozen broth from this recipe.  Because I doubled the recipe, I also used a 4-cup carton of chicken broth, and didn't drain the tomatoes I used.  The finished broth in this recipe turned out extra delicious.

I had a parsnip in the fridge which I diced and added to the carrots and celery.  Its taste was subtle and very nice.

This recipe lends itself to using whatever vegetable you fancy.  I will add mushrooms next time.

Another note, the diced tomatoes I had in the pantry had chilis added.  The soup came out hotter than expected.  If you don't like the extra spicy heat, you might make sure you are buying just plain old diced tomatoes.  For us it was perfect.

Those are all the changes made.

If the link at the beginning of the recipe doesn't work, I have added the address below.  I sometimes forget to do this.

Thank you for looking.

Have a great week.