MEADOWLARK GARDENS - YESTERDAY'S CRITTER WAS A....

Snapping Turtle.  Those of us who live with them in the area may recognized him, though must admit I would have a hard time if I had not taken this photo. I have always enjoyed seeing them in our local lakes and ponds.  Like many of the wild things I see, I wouldn't like to get too close to that beak, but I do admire them from afar.  More on him later, but first here are other critters I saw that day, a few of them I have shared in my previous posts. 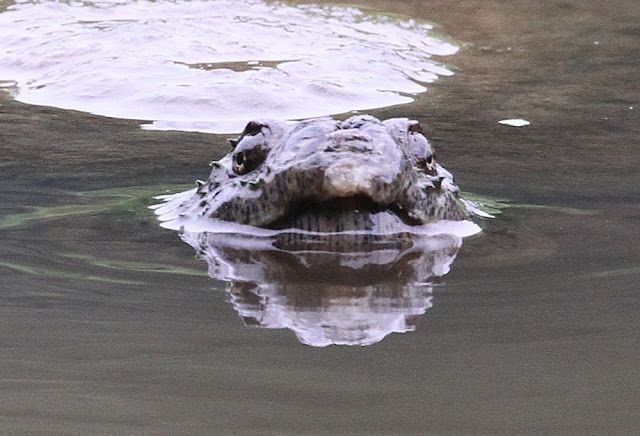 We walked down to the lake at the bottom of the garden.  There was a small flock of Canada Geese, six of them.  They looked young but were older than the fluffy little goslings I have seen in the Spring, had the distinctive color pattern of the Canada Goose, and yet seemed smaller than a fully grown adult.  I didn't see any parents nearby.  Our little family were approaching the water's edge when I first noticed them, and I saw two hesitate before following their siblings into the lake.  I thought this odd but did I imagine the extra patience in the rest of the family while waiting for the two to follow them into the water?  I registered the hesitation and the others waiting, but then as they all swam across the lake, my attention was taken elsewhere. 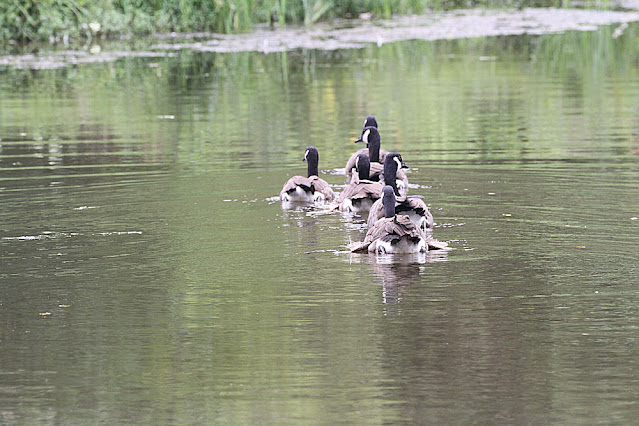 These two turtles, probably Red-eared sliders, weren't too far away and we took our photos.

It wasn't until I downloaded them and looked on my laptop later, that I noticed a dragonfly had settled on the one turtle's nose.  I cropped the photo to take a better look. 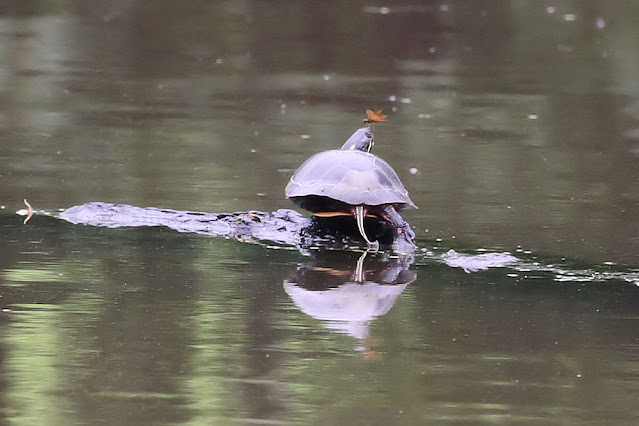 Then I saw the Snapping Turtle swimming towards us.  You can't tell but it is almost three times as large as the sliders on the log.  Did you know they can live up to 30 years in the wild?  Since I added this post I read a comment from Jenn over at Cottage Country Reflections.  Jenn gave me a link on a snapping turtle she took photos of, and a lot of information, all of which I found very interesting.  You can find Jenn's post here.  It reminded me of some hatchling snappers I came across when we were in North Carolina back in 2017.  That post is here.  They are near the bottom of the page. 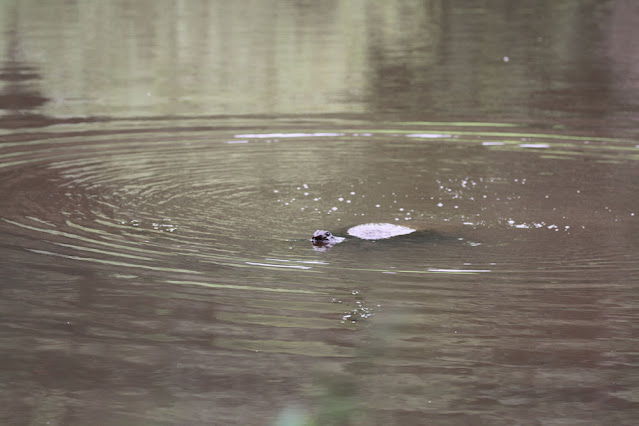 I cropped these photos to get a better look at its face.  It was swimming away it seemed and then turned and headed towards us.  Do you think they are as curious about us as we are about them, or was there an expectation of food?  It would have been sorely disappointed as we don’t feed any animals, unless their circumstances are dire.  Fortunately we have never come across a situation.  I admit, I do feed our backyard birds and squirrels in the winter.  I wonder, however, what a professional would advise?  As you read further down the post you will understand why I am doubting myself, and would appreciate anyone’s opinion on the matter. 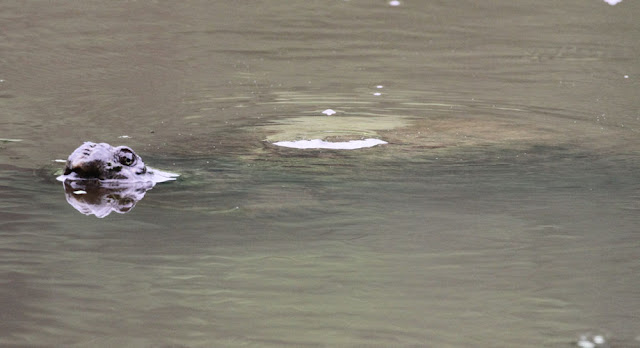 A Snapping Turtle can weigh up to as much as 75 pounds in the wild (and 86 in captivity).  It is an omnivore and its range stretches from Saskatchewan to Florida. 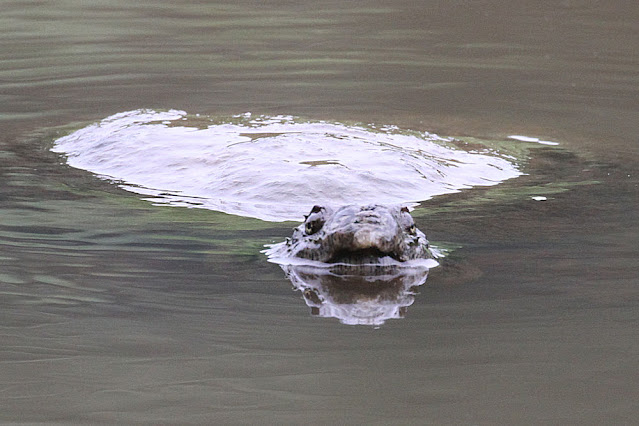 When people see a baby snapping turtle in trouble and try to help it, they often pick it up by its tail.  However, if we do that there is a big chance of hurting the turtle by injuring its vertebral column.  There is a video on YouTube here which shows the correct way. 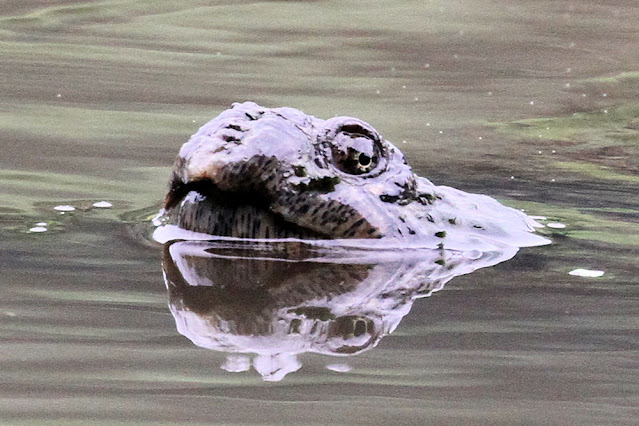 Here is another photo of the butterflies I shared here if you missed them. 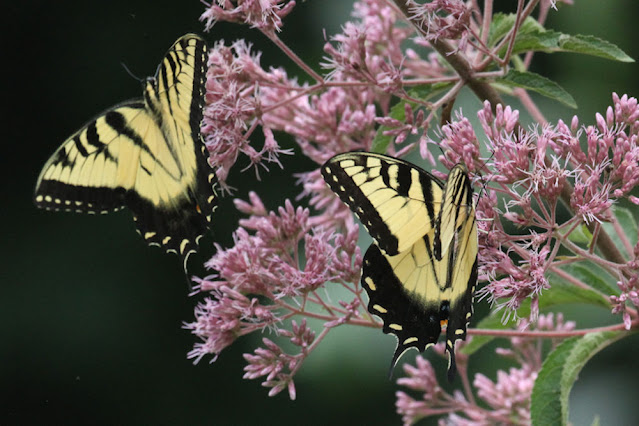 Below is a collage I put together and as the geese are included, I thought I would tell you my experience with these young geese.  It is something I have never come across before.  As we got back nearer the visitor center I saw the same group next to the path.  They were quite close and I had a good chance to observe them.  One of the geese was a self-appointed guard and he kept a wary eye on us while the others ate.  We weren't that close but I did take a few photos.  However, I decided not to share them as it showed two that had a distressing look to their wings.  They hadn't formed properly and the only description that came to mind was that they looked shredded.  I thought at first that they were in a molting stage, but the more I studied them, the more I realized something was wrong.  When I got home I did a search on line and found photos where other geese looked identical to the two I had seen.  It is called Angel Wing and I found a very informative article at this link.
The article encourages us to spread the word, and I have copied it to share here:
"Angel Wing is caused by a nutritional deficiency in vitamins and minerals, combined with a high level of carbohydrates and sugars.  While a number of facts are involved, human fed bread is one of the probable causes.  It causes the carpal joint (or wrist) on the wing to grow awkwardly, leaving the wing unable to sit flush at the bird's side (I read in another article that the blood flow is affected and it can't reach the tips of their wings).  This affects their ability to fly and the growth of their primary flight feathers, making them look more like sticks than feathers.  Damage in fully mature birds is irreversible and likely fatal, due to the inability to fly to food sources and rejection from their flocks.  If the bird is young and the diet changes dramatically, however, the damage could be reversed.   Although there are more nutritional foods that humans can provide (like non-moldy cracked corn, wheat, barley or standard birdseed), geese and ducks are grazers and have no trouble finding food on their own.  In fact, feeding them can create an unnatural and unhealthy dependence on us as their food providers, and can lead to other problems, like overcrowding and water pollution.  Help keep our waterfowl happy and healthy by spreading the word about the dangers of feeding them with bread and crackers."
Fortunately for our two little geese, its family seemed to be hanging around to take care of them.  I am not sure how long this will continue but I have read that other healthy geese will stay with one that is not, to take care of them.  Also I am sure the garden will keep an eye on their welfare, and I will make enquiries the next time I go back. We wondered if perhaps they had a sign at the center that we missed.  Anyhow, there are many, many articles online describing Angel Wing, and photos also.  I just couldn't bring myself to share mine, other than the one above and here below in my collage. 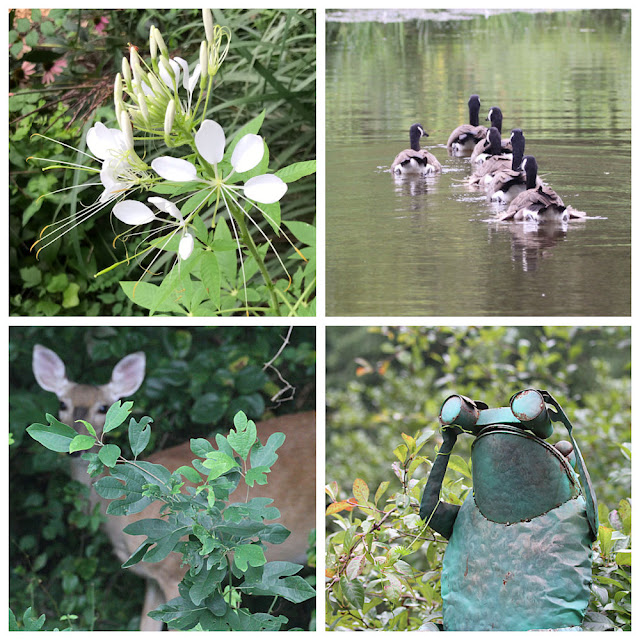 The deer photos I took are here.
The only other bird I could get a photo of that day was the rooster weather vane.  He sits on top of the gazebo keeping an eye on everyone.  Like the loveable frog with the binoculars, he has been here since we started coming to the park 20 plus years ago. 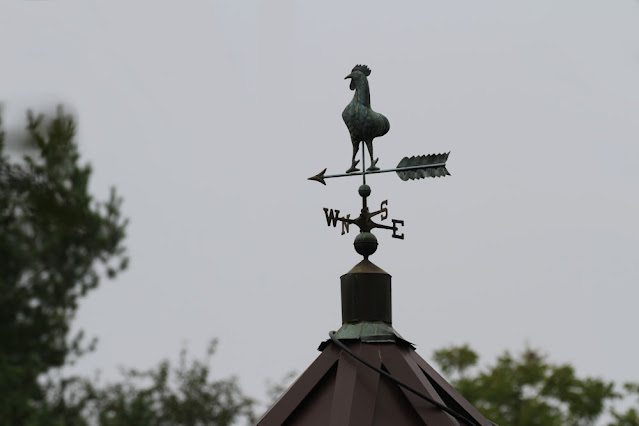 That's all for now.  Next I will have a post about the plants and flowers.
Thank you for looking and
have a great day.

Posted by DeniseinVA at 5:55 AM