Continuing our walk, in today's post I concentrate more on the flora.  This is the Spider Flower (botanical name Tarenaya hassleriana).  It is also known as the Pink queen, Grandfather's whiskers and Spider plant.  It is a flowering plant native to South America and has other colors than the white one shown.  It can also be seen as pink or purple. 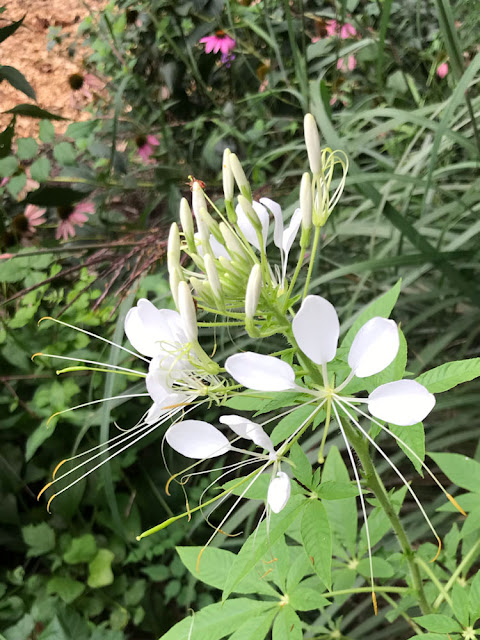 The following shows something I have seen in other gardens, and is called Cardoon (botanical name Cynara cardunculus).  It's other names are Artichoke thistle, Globe artichoke, Prickly artichoke and Cardy. 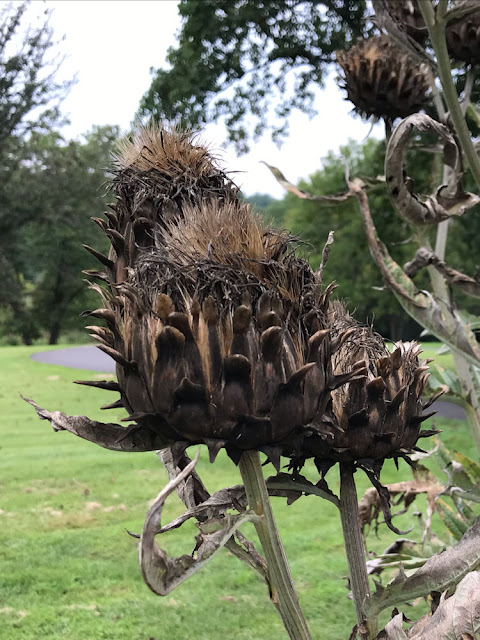 The Cardoon was first brought to the United States by Spanish and French settlers in the middle of the 19th century. 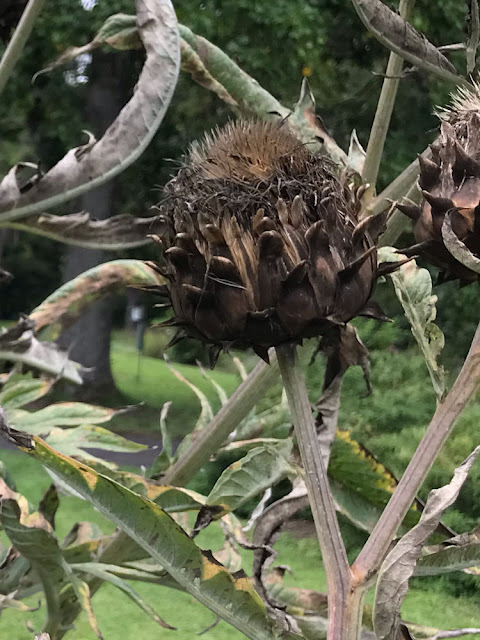 According to my plant app, it says that Sicily happens to be one of the few places where the stalks of certain types of thistles are consumed. 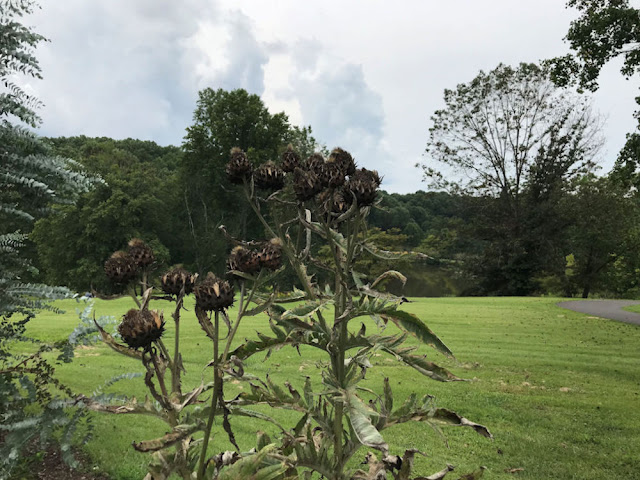 In Sicily, the dish is called carduna, from the latin term carduus, which is the plant's principal genus.  The Italian word cardo is more generic and does not refer to a specific scientific family.  Therefore, it is called Cardoon. 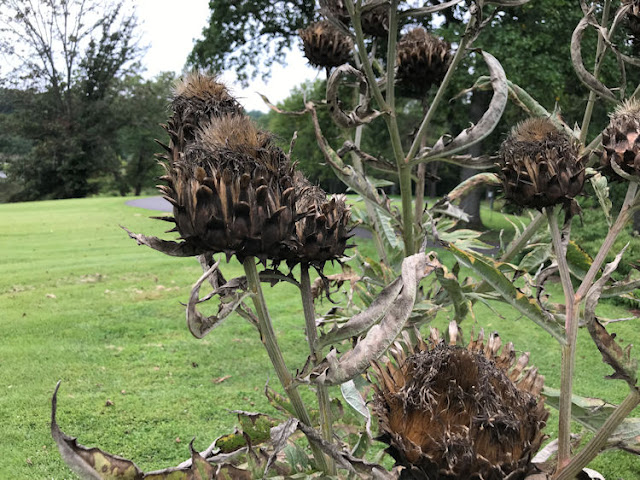 Next is the Red amaranth (botanical name Amaranthus cruentus).  Its other names are Mexican grain amaranth and Purple amaranth.  Its leaves are often used for decorative purposes and are also used to make red dyes. 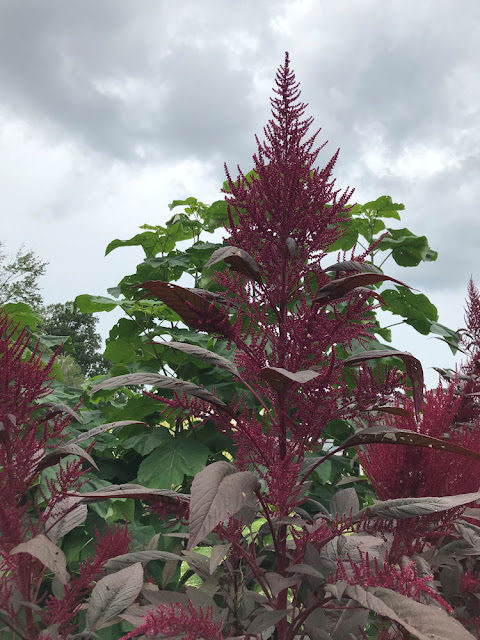 The plant is named for its bright gold, purple and red leaves that retain their beauty even after harvest and drying.  With the color of the leaves it is called the red amaranth. 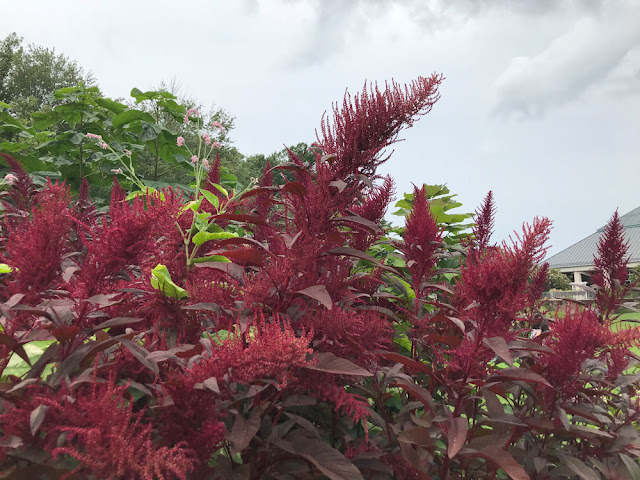 Normally the first thing I notice are the blooms of the Crimsoneyed rose-mallow, but I found this stage interesting.  Its botanical name is Hibiscus moscheutos and is also known as Swamp rose mallow, Rose-mallow and Eastern rose-mallow.  It is a very hardy plant and can tolerate frozen temperatures up to -13 degrees. 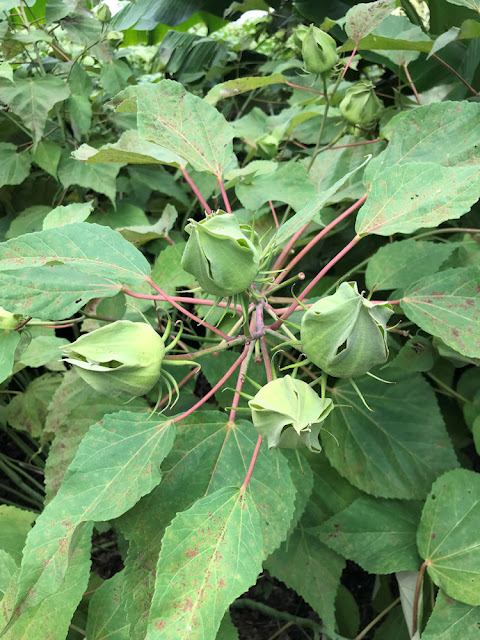 It is providing a resting place for a Skipper in the next photo.  These little creatures were everywhere. 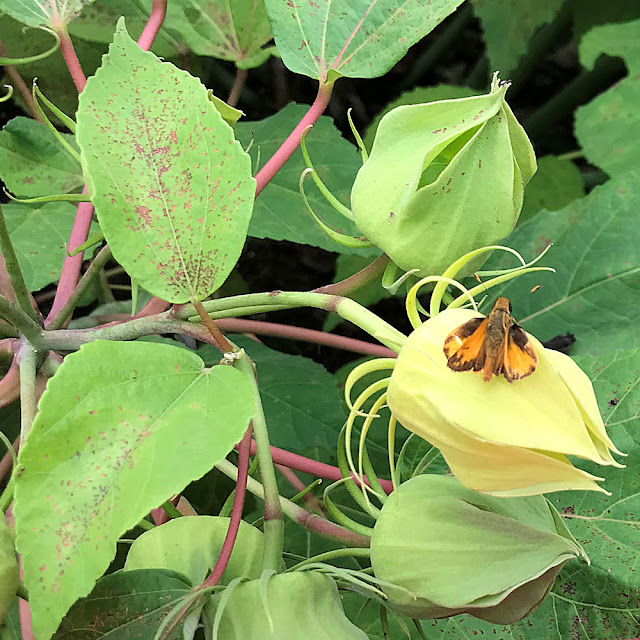 This plant is called Coleus (botanical name scutellarioides).  It's other names are Common coleus, Painted nettle, Coleus blumei and Trailing coleus.  It will grow in full sun to medium shade but the colors are most vivid in full sun. 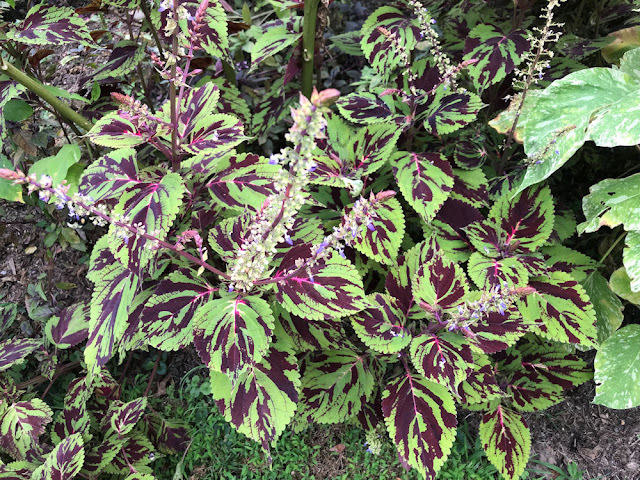 I always like to hear that a plant is super easy to take care of and this is one of them.  It is resistant to almost all pests and diseases. 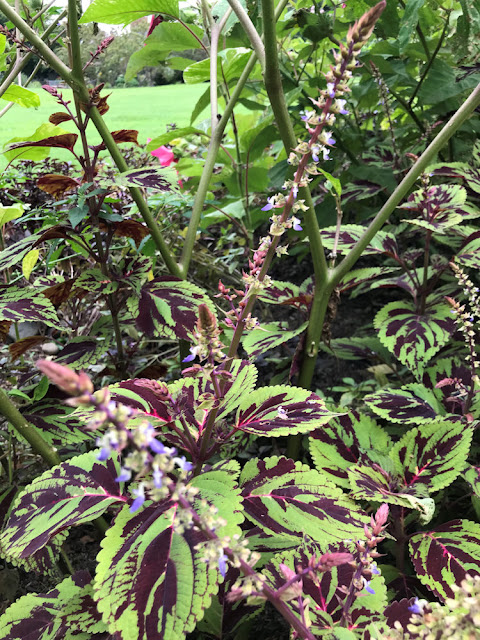 This is also a Coleus plant with different colored leaves, as you can see. 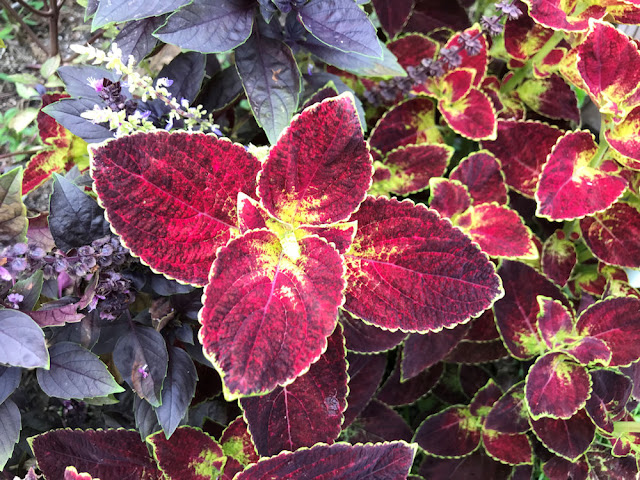 In the following photo you will see the Rosehip of the Dog rose (botanical name Rosa canina).  It is also called Dog briar, Common briar, Briar rose and Dogberry. 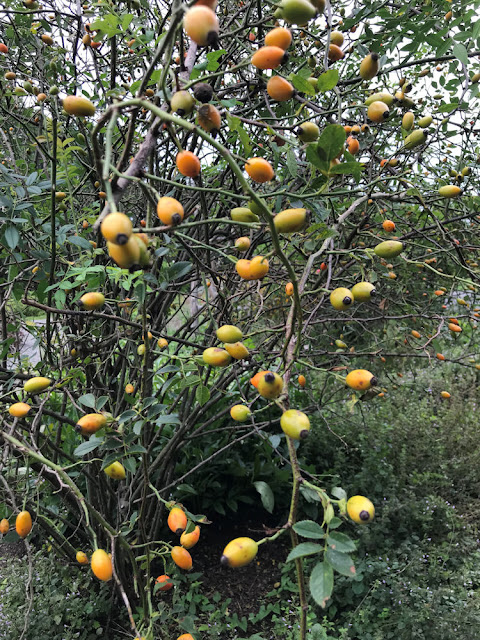 I read that all Rosehips are edible and has a high level of vitamin C.  It is used to make things like syrup, tea and marmalade, and more.  You can read about it here also.  The color is typically red to orange but ranges from dark purple to black in some species.  They form after pollination of the flowers in spring or early summer, and ripen in late summer through Autumn. 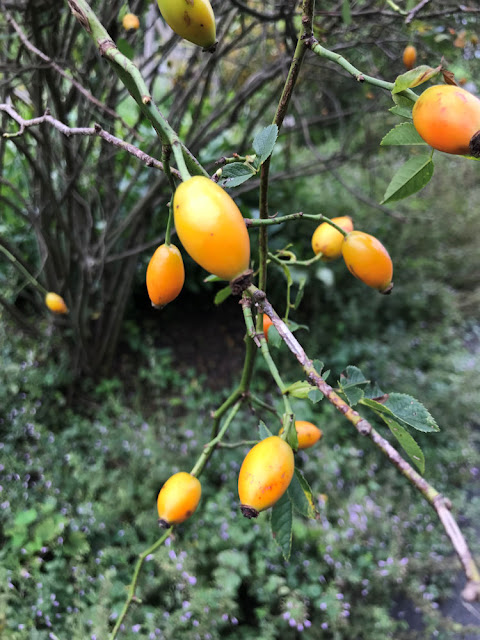 Here we have China pink (botanical name Dianthus chinensis).  It's other names are Chinese pink, Rainbow pink, Japanese pink and Indian pink.  The China Pink is also called the "mother's flower" in many countries.  Wearing this flower on Mother's Day implies wishing mothers happiness and good health.  China pinks have also become a flower of love for mothers. 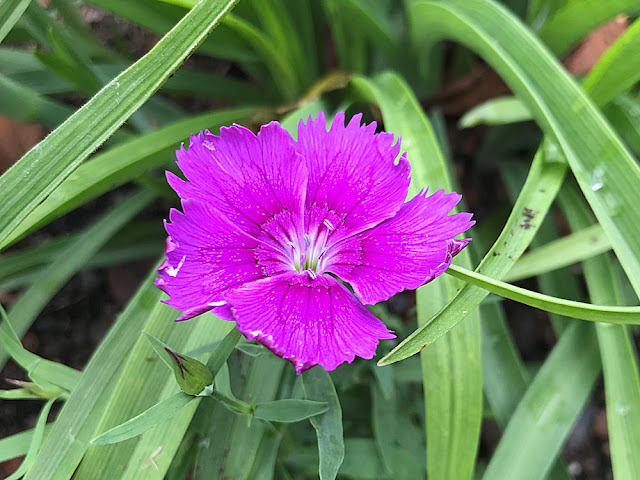 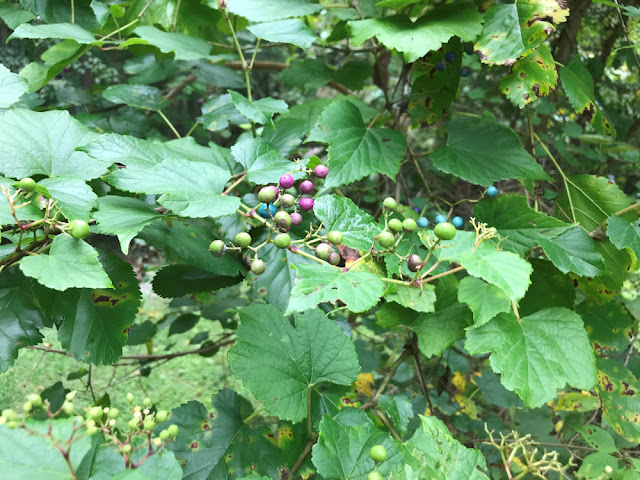 Next is the Common sassafras (botanical name Sassafras albidum).  Also known as White sassafras, Red sassafras and Silky sassafras.  The name "sassafras", given by the botanist Nicolas Monardes in 1569, comes from the French word, sassafras.  Some sources claim it originates from the latin word, saxifraga or saxifragus meaning "stone-breaking", saxum meaning "rock" and frangere meaning "to break".  As it is also the most common species in the genus, it is called common sassafras. 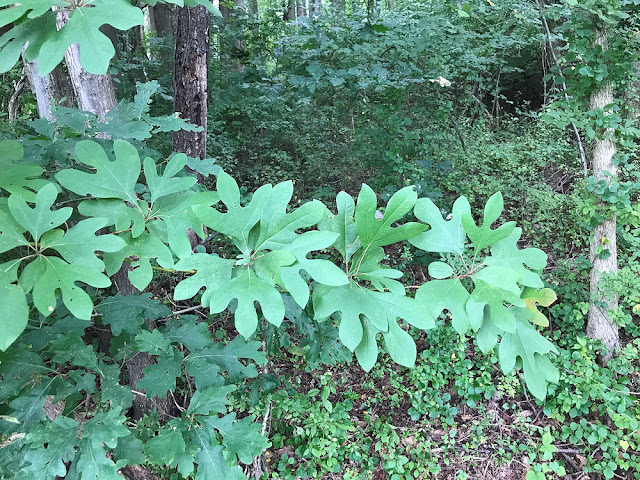 This is Sulfur cosmos (botanical name Cosmos sulphureus).  Other names are Klondike cosmos, Yellow cosmos and Orange cosmos.  It is an annual flower and is native to Mexico, Central America and northern South America.  It attracts bees and butterflies, including the Monarch butterfly. 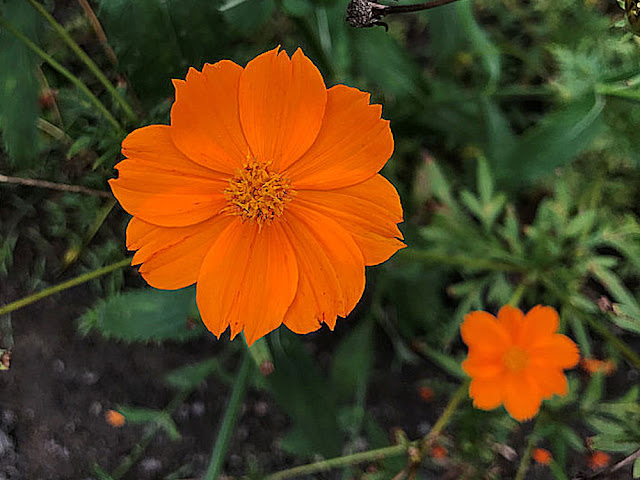 I am very grateful to my plant app called 'Picture This', where I get most of my information from. 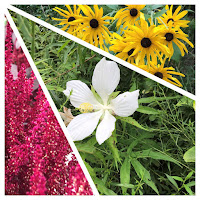 And that's about all for the plants and flowers.  I thought I would end my post sharing some of the scenery from our walk. 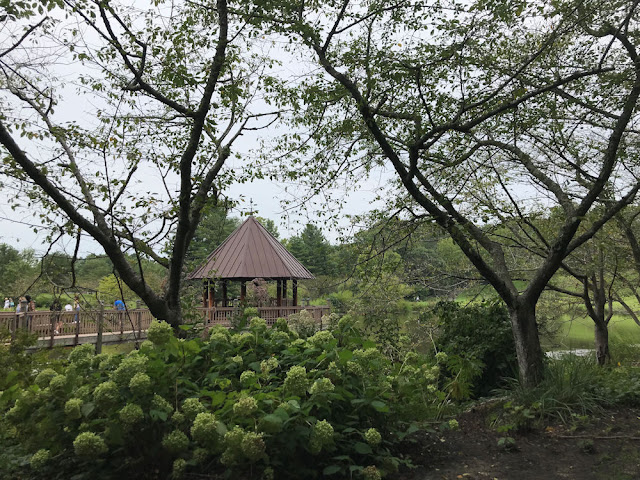 We sometimes sit down inside the gazebo but we left others to enjoy it today.  Instead we made use of one of the benches along the path nearby. 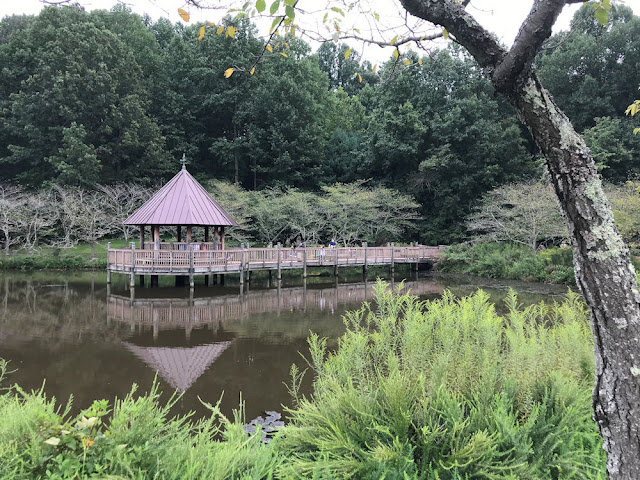 There are several benches along our walk and it is a very welcome feature of the garden. 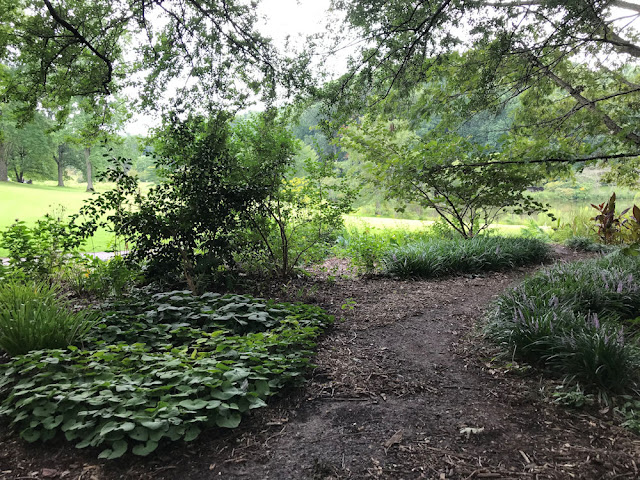 We chose another shady spot where we like to sit and talk and take in our surroundings. 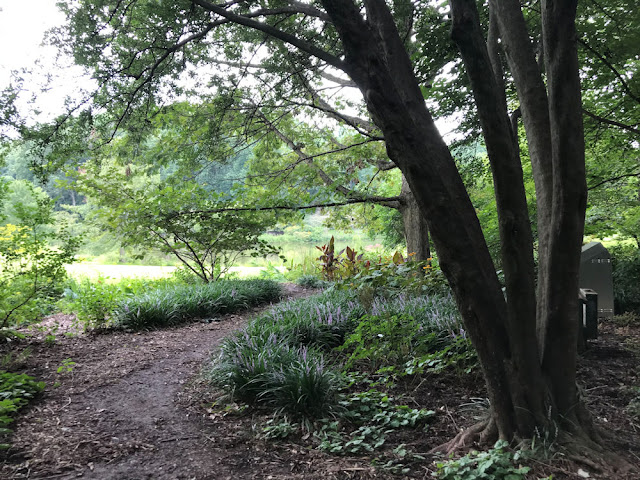 And that's about it for today's walk around Meadowlark Gardens. We are very happy to be visiting again.

Thanks for stopping by and I hope your day is a great one. 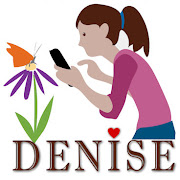