I found a new place for us to go.  A lot of areas we enjoy are within an hour's drive, and this was one of them.  It proved to be a delightful area to get photos and some exercise. 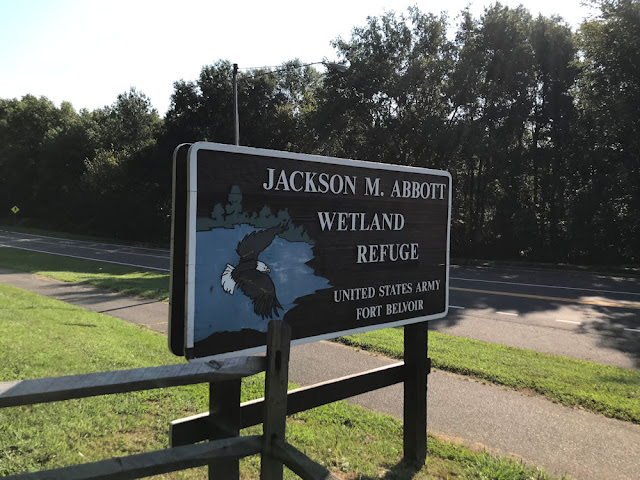 The man it was named after was a retired Lieutenant Colonel with the U.S. Army Corps of Engineers.  The sign with this information read:
"A dedicated soldier, conservationist, researcher and wildlife artist who studied the birdlife of Fort Belvoir for 45 years.  His lifelong achievements remain an important contribution to the installation and the Nation.  Dedicated October 1989 - U.S. Army, Fort Belvoir, Virginia." 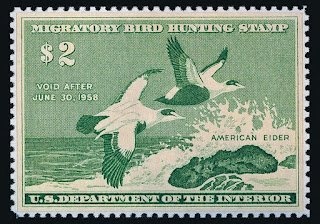 As mentioned earlier, Lieutenant Colonel Abbott was a gifted artist.  He is the only individual to take both first and second place in the Federal Duck Stamp contest.  His artwork can be seen above in the 1957 postage stamp. You can read more very interesting information about him at this link. 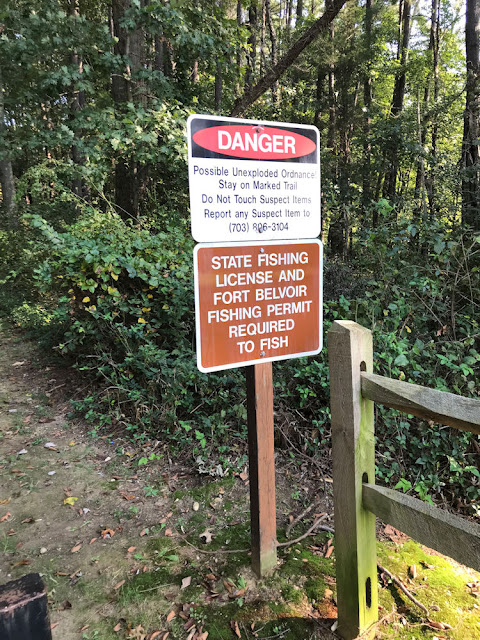 An interesting sign was at the entrance.  My dear other half pointed it out to me and it gave me pause.  Fortunately I have always stuck to the designated trails, and wasn't about to go tromping off into the woods.  Yes, I stayed on the trail and did not touch any unexpected items. 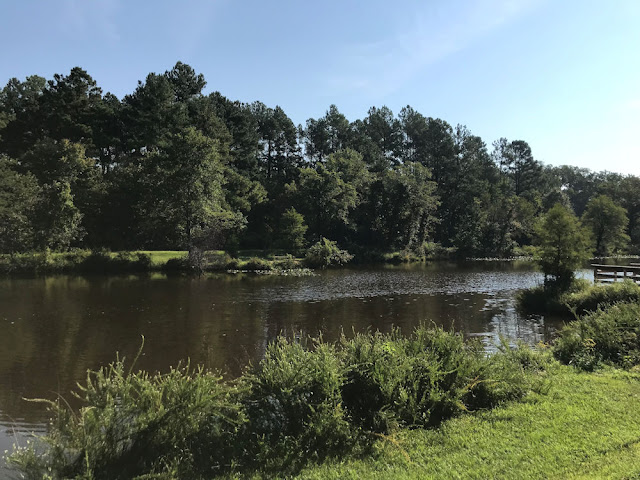 We walked down a long paved path to get to the lake.  There were five or six dedicated walkers who, while we were there, made multiple trips around, and at least two were speed walking.  They passed us three or four times.  This is a nice, flat area, a great place for doing just that.  We enjoyed our exercise but at not such a great pace, and were busy looking at our surroundings, both of us taking photos of whatever peaked our interest. 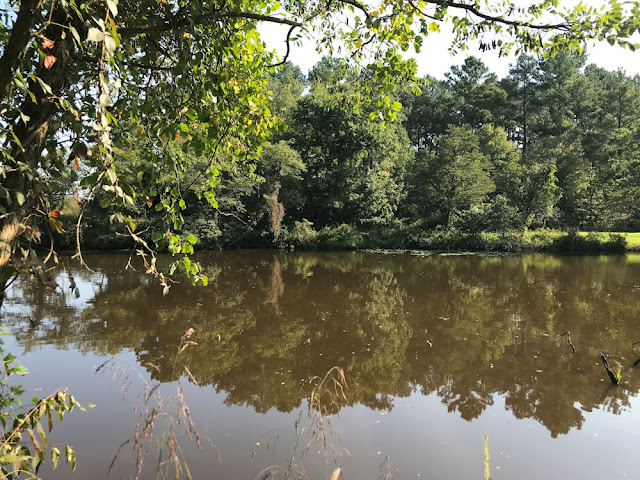 Jackson Abbott Wetland Refuge is a 0.6 mile loop trail located near Fort Belvoir, Virginia, in a great forest setting. The trail is rated as moderate and is primarily used for hiking, walking, running, and nature trips. Ours was definitely a nature trip today. 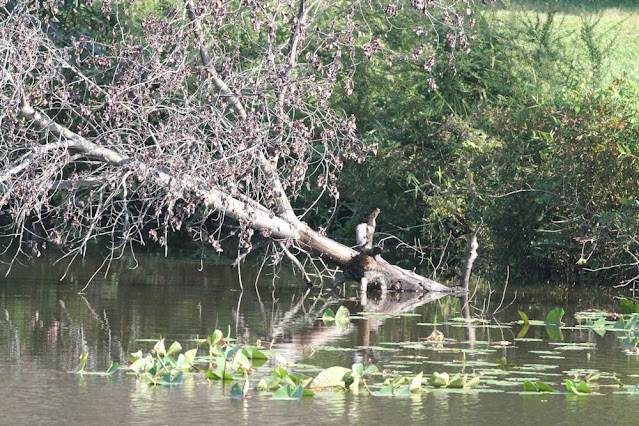 One very interesting thing I learned later is that this wetlands adjoins Huntley Meadows Park to the southwest.  We actually drove by the entrance to Huntley Meadows on our way home, but energy level was at a lower ebb by then.  We had left the house early that day and both had had a night-owl kind of a night.  By the afternoon we were in need of a break.  I looked wistfully in that direction and half-heartedly said maybe we should turn into the park, but Gregg said best to tackle that walk when we were fresh.  He is much wiser at realizing our limits than I am.  It will be an easy drive on another day. 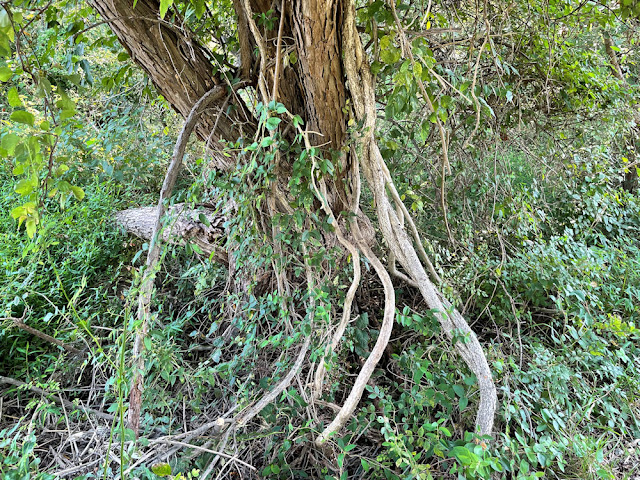 And we had had such a good time discovering this pretty area with all it had to offer.  I identified the butterfly below as a female Pearl Crescent. 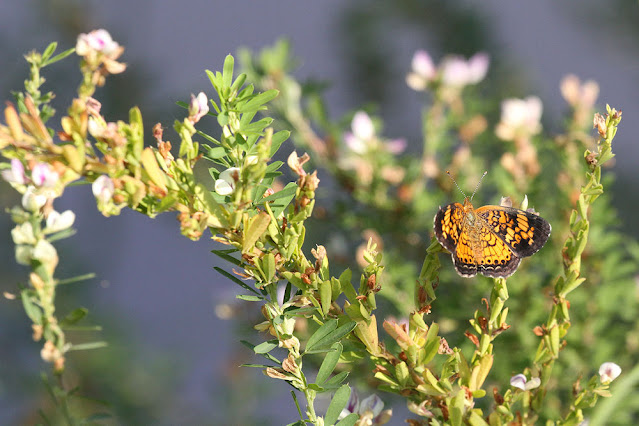 On line I read. "The males of the Pearl Crescent are similar to the females, and just slightly more open in the hind wing, but the males of the Northern Crescents are much more open and have a very distinctive dark patch in the middle of the hindwing margin below."  My information came from this link. It shows photos of male and female.  I was happy to get these photos and this one stayed in place for several minutes. 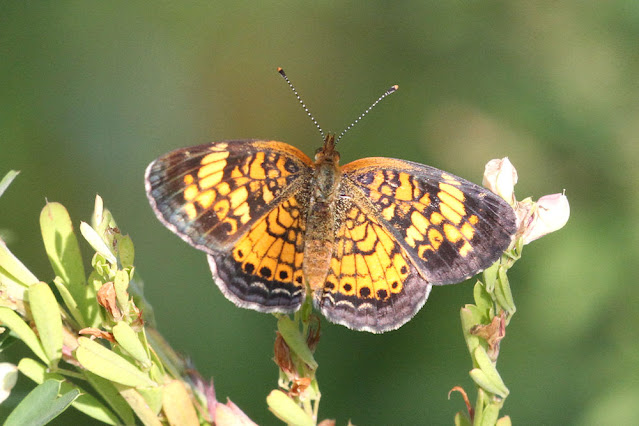 You will probably recognize the New England Aster (botanical name Symphyotrichum novae-angliae).  Its other names are Michaelmas daisy, Hairy michaelmas-daisy and Savoryleaf aster and is a native of North America. 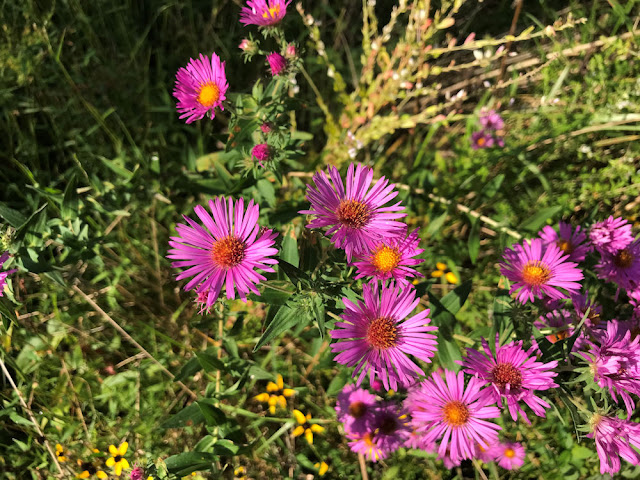 It is both drought-tolerant and deer resistant, though Mr. and Mrs. Cottontail with enjoy nibbling on them. 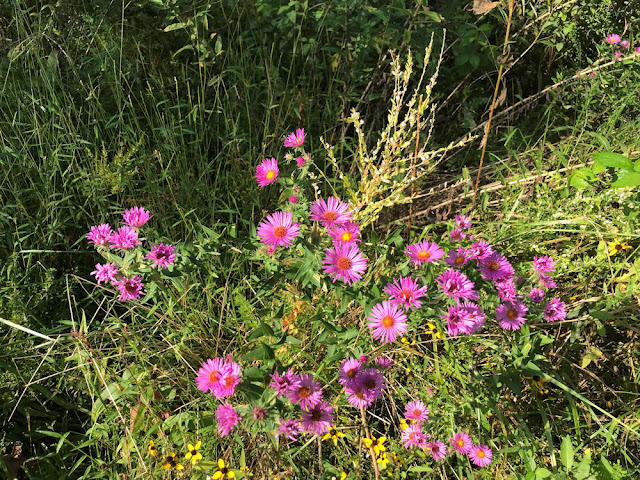 There are three seating areas and we made use of one overlooking what you can see in the next photo.  We were hopeful that we would see water birds, and you might be lucky and see a Bald Eagle. None today however.  There are also two other overlooks that would be suitable for fishing.   People can fish here but I saw a sign saying a fishing permit would be needed first, and it gave the numbers where you could obtain one. 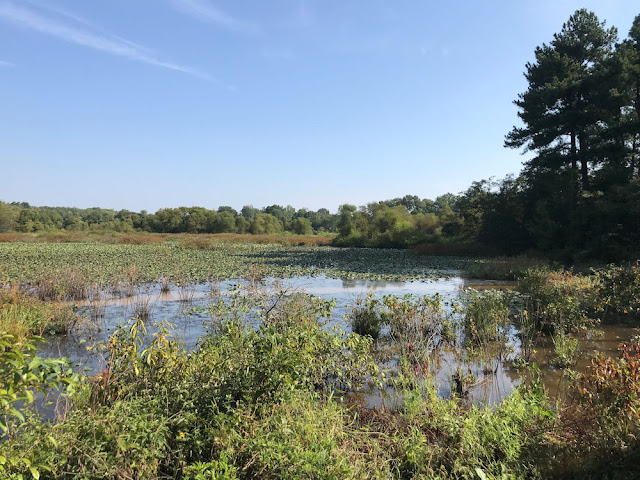 I found a large plant of blooming Orange jewelweed (botanical name (Impatiens capensis).  Other names are Spotted touch-me-not, Spotted jewelweed and Orange balsam.  Another wildflower that is native to North America.  Also considered mildly toxic compared to others but not to be taken lightly as children can become more ill if they eat it by mistake.  I am amazed at how many plants we need to be wary of. 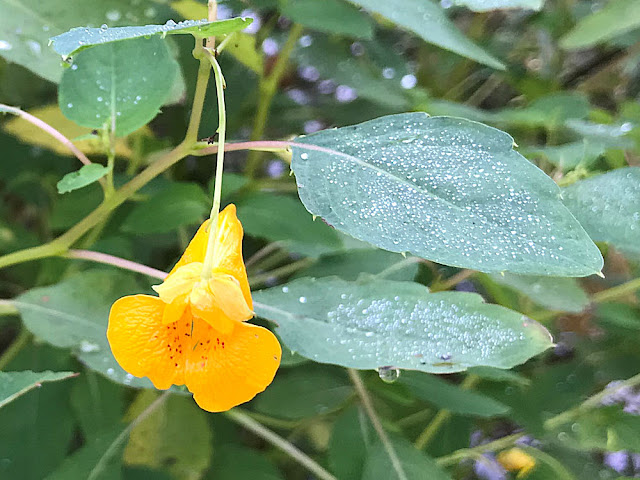 Speaking of which, next you will see the Carolina horsenettle (botanical name Solanum carolinense) and is a member of the nightshade family.  Also known as Sand brier, Devil's tomato, Bullnettle and Tread-softly. Native to the central and eastern United States and northern Mexico. It has been prohibited in Arizona as a noxious weed.  The fruit can be mistake for an unripened tomato don't you think?  The flowers and leaves of the carolina horsenettle are very similar to those of the eggplant. When the fruit matures, it turns attractive yellow, and many people mistake it as edible and it will cause some nasty side effects if ingested. 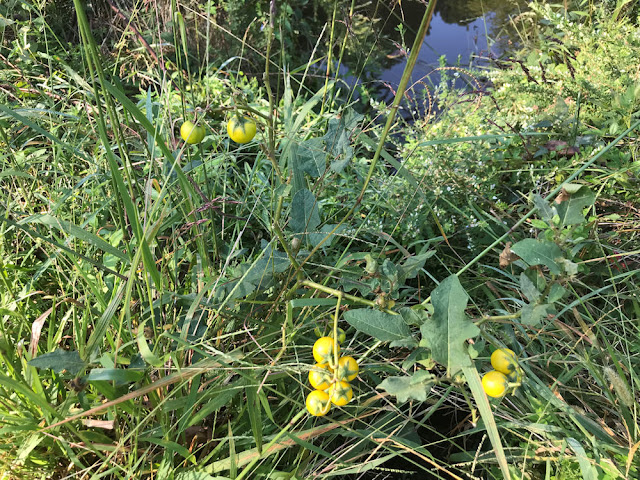 Another plant to stay away from when tromping through the woods, but no tromping in these woods!  It is native to the central and eastern United States and northern Mexico.  Once established, Carolina horsenettle colonies are difficult to control or eliminate. I have provided three links where you can read about it in more detail, with photos, here, here (scroll down to the fourth paragraph) and here. 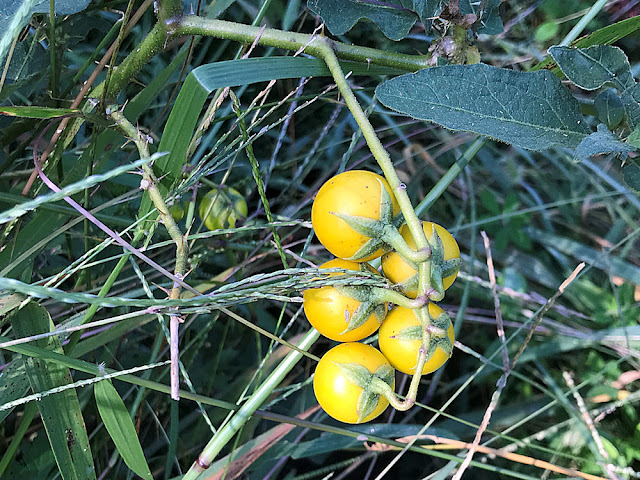 We came across several small carpets of cobwebs laying flat on the grass.  Ever curious I looked up what kind of spider made these.  It belongs to the American grass spider.  They usually occur in cool season grass with lots of shade.  It's not a sticky web but serves as a vibrating notification system to alert the spider when a potential meal is wandering by.  Non-venomous to us thankfully.  These are also called funnel spiders.  The spider builds its funnel first, and then the 'carpet'.  That funnel goes from the web goes down to its lair, a hole in the ground. 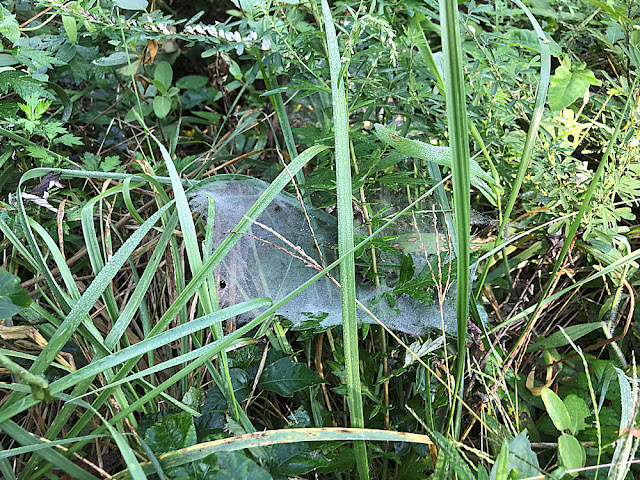 Grass spiders are actually beneficial as if you try to get rid of them, you will see a rise in non-beneficial pests to your garden. It was said back in the day, that if there is dew on grass spider webs in the morning, it will be a beautiful day.  If you don't have an aversion to these things, here is a link where you can find photos and information. 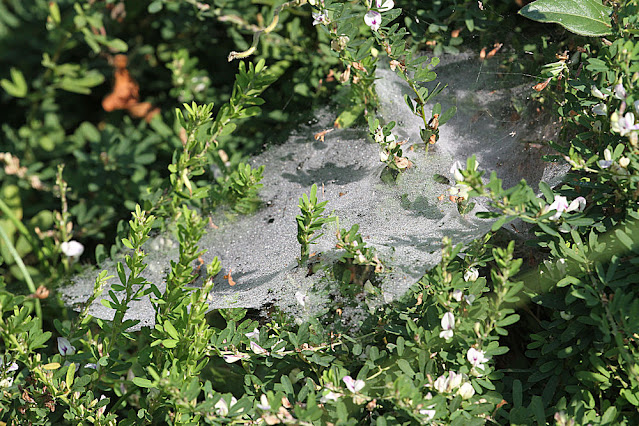 Gregg took several photos on our walk and he noticed the following insect lying in the grass.  It was very well camouflaged and I could hardly see it.  It is either a female Eastern Common Pondhawk dragonfly, or could be a juvenile.  I am not an expert on these things.  The male as they age gradually turns a powdery blue from their abdomen to their thorax. 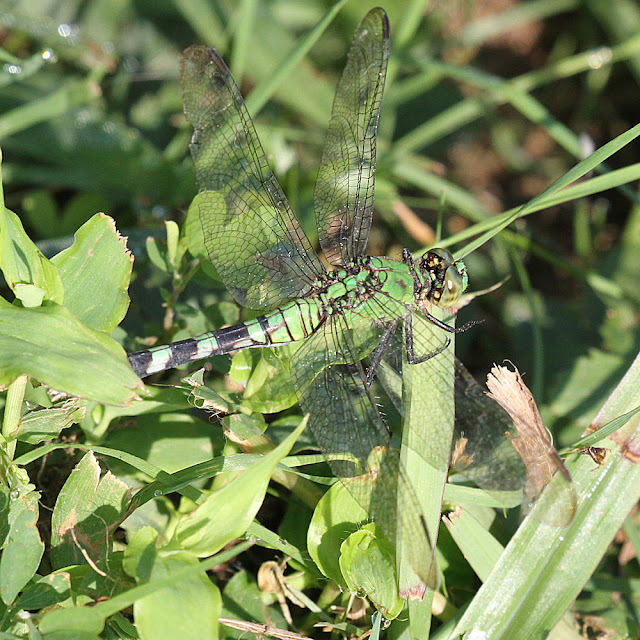 The next photo could be the male?  You can look here if you interested. 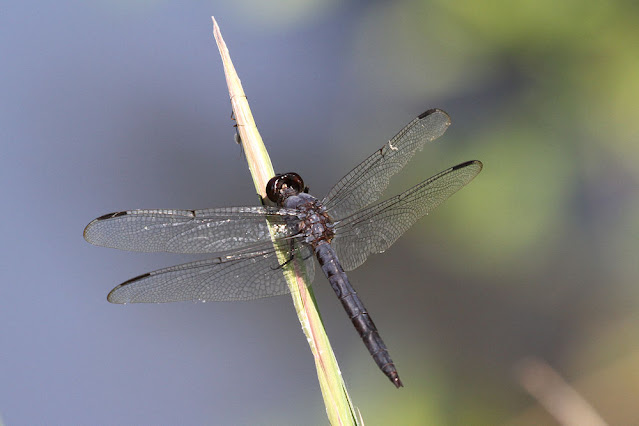 The next two shots could be the same, but it was too far away for me to be certain, even with cropping. 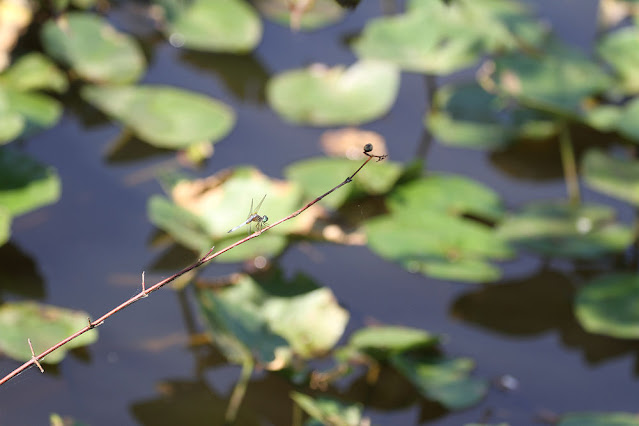 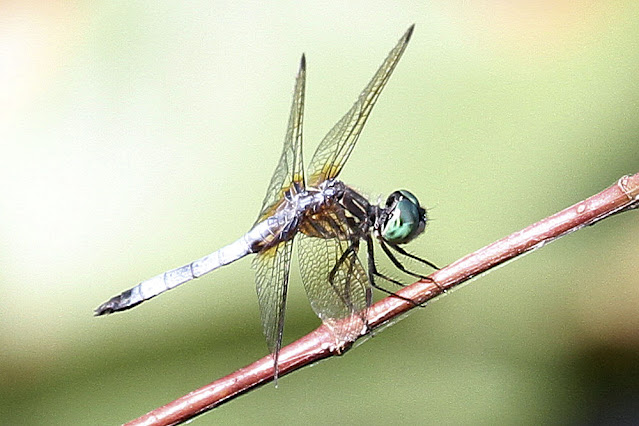