CONTINUING OUR WALK AROUND MEADOWLARK GARDENS ON 5-5-22

The Canada Goose is always present at the garden, but not in great numbers.  I didn’t see any nests but may have missed them.  I don’t actually go looking for them. 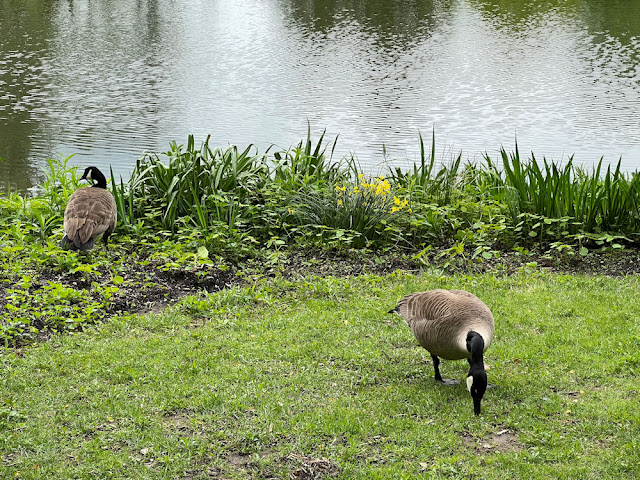 “The gander is a fierce defender of his mate and offspring, and will charge any suspected enemy, even one as large as an elk. Mated pairs can be together as long as 20 years.”  This, as I once found out, applies when nests are being built.  I wasn’t charged but definitely warned away when coming across a nest unexpectedly.  You may have your own stories. 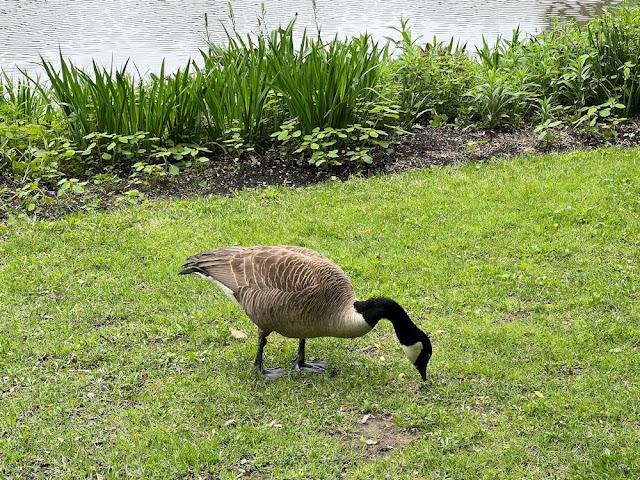 “The nest is a large mound of vegetation such as grass and cattail stems lined with down.  It is usually located within sight of water. 4 to 7 white eggs make up a typical clutch and incubation is done solely by the female.  The gander (male) zealously guards the nest and will attack any intruders. Incubation takes 25 to 30 days and the goslings are led to water within a day after hatching. The goslings stay with the parents until the following spring.” 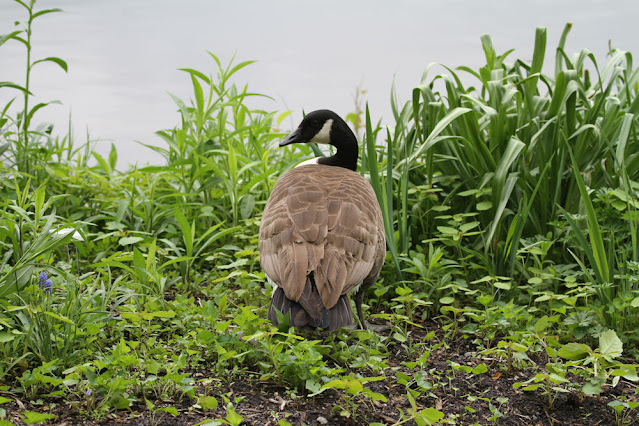 If you have young ones in the family, there is a website for kids at this link. It is where I found the above information. 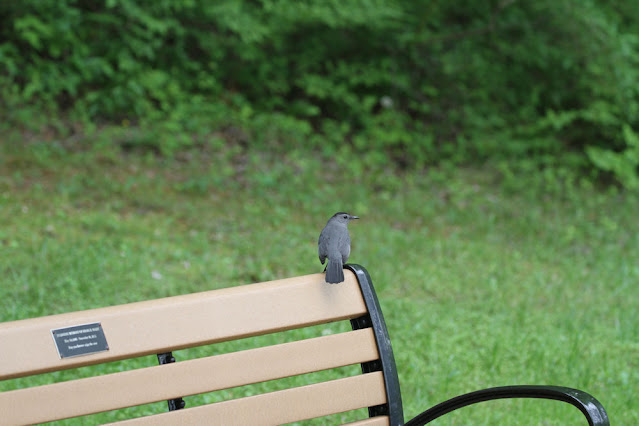 We were delighted to find a Catbird posing long enough for a photo.  These are also regular visitors at our home.  A site where I found the following information, also with young people in mind, can be found here.  “The North American gray catbird lays anywhere between one to five eggs.” and “Catbirds are a group of 14 different birds that are found basically all over the world. These birds belong to four different genera from three different families. The Ptilonorhynchidae family include Australasian catbirds of the genera Ailuroedus and Scenopooetes. Black and gray catbirds are from the Mimidae family, and the Abyssinian catbird is from the Timaliidae family. Catbirds have been given this name because of their cat-like and wailing calls.  Australasian catbirds are endemic to Australia and New Guinea, black catbirds to the Yucatán Peninsula, Abyssinian catbirds to Ethiopia, and gray catbirds are North American birds.” 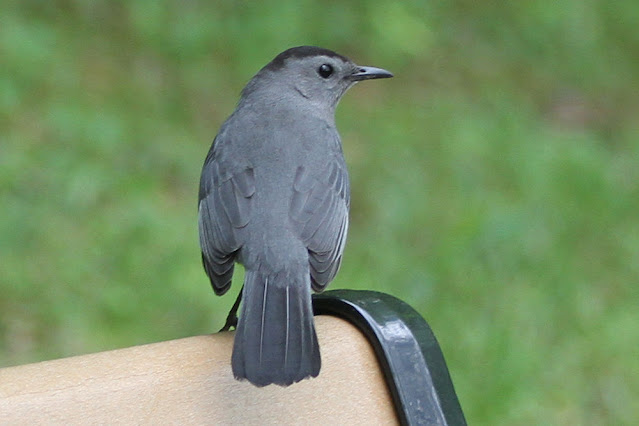 We are walking around Lake Caroline and will often visit the gazebo if it is quiet.  Today we decided to carry on to Lake Lena, but first took a few more photos along the way. 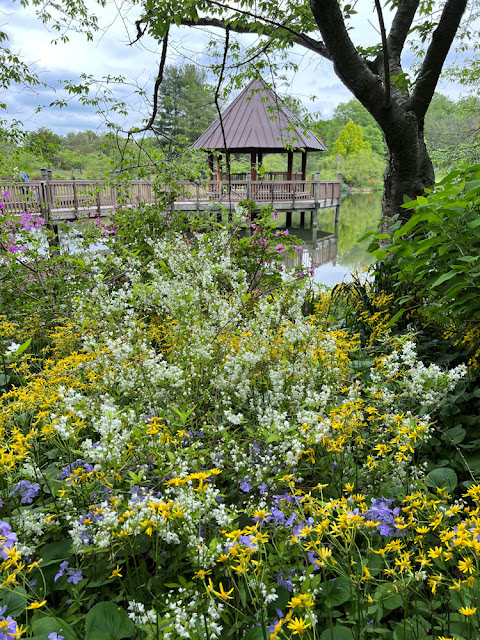 I can see phlox here, a white flower I am not sure of.  I should have taken a closer look. 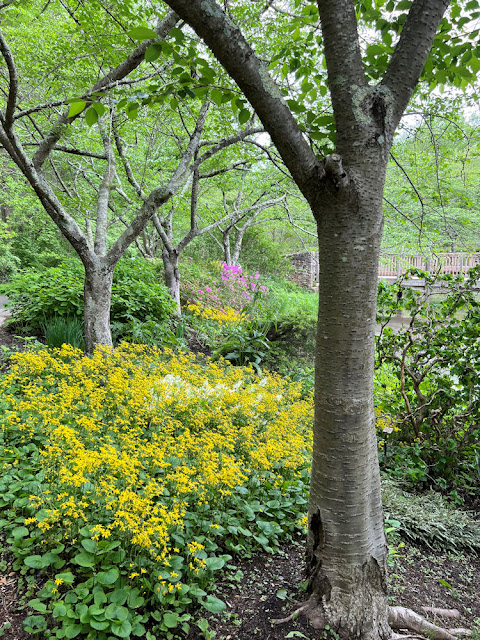 The yellow flower I do know is Golden ragwort. Its botanical name is Packera aurea.  Another name for it is Golden groundset. It blooms in spring and summer, and is a perennial. 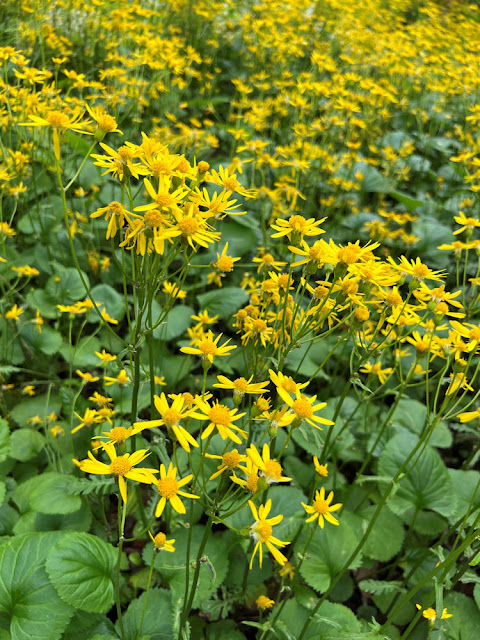 One of my favorite areas is where the peonies bloom.  There were a few reds and pinks, but it was still relatively quite as far as blooms were concerned. Their botanical name is Paeonia lactiflora.  Another name for it is the Common garden peony. 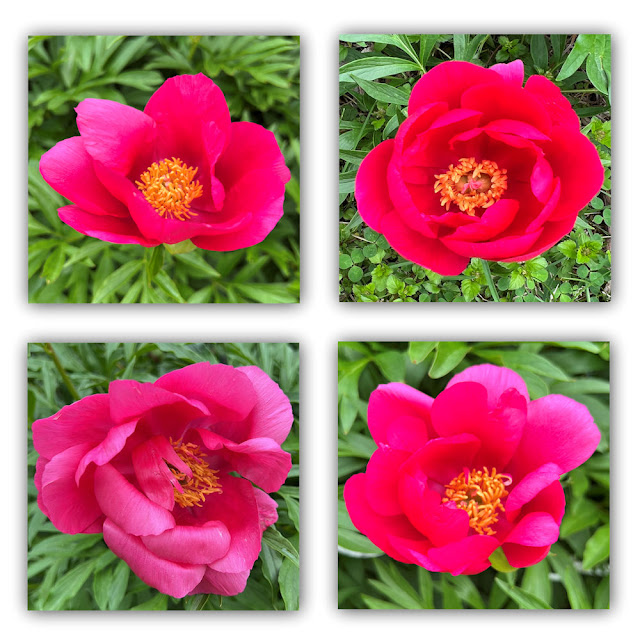 We arrive at Lena Lake and there was more Azalea blooming, but I will stop here for now.  That part of our walk will be in another post when I get one together. 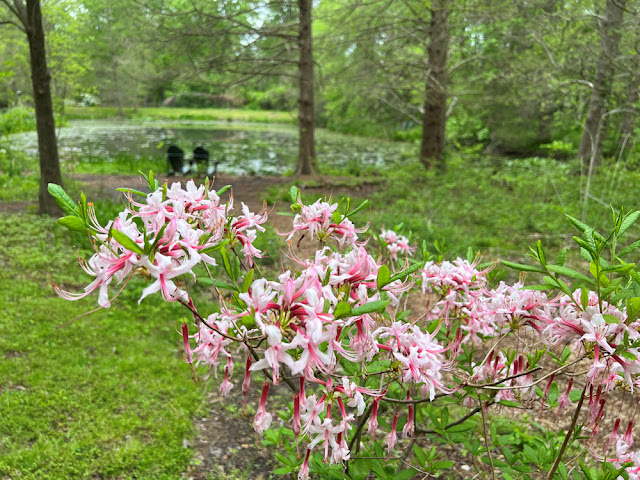 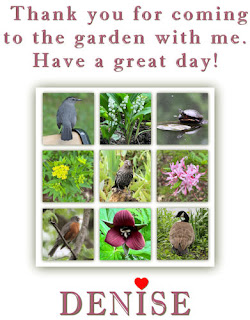