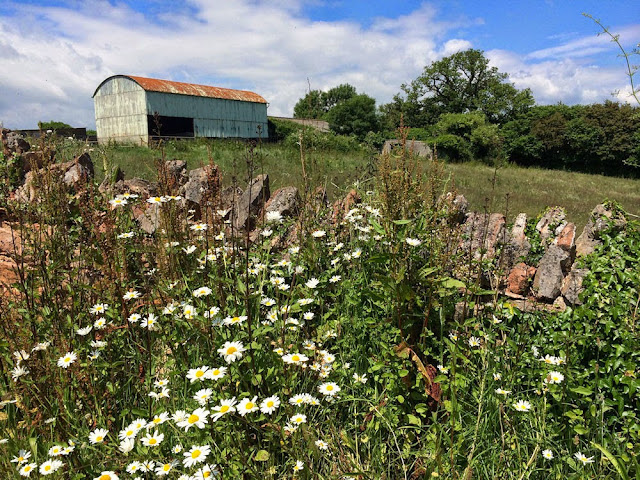 (View over the church wall of my village in the UK, near my old home.)

Who is this WWI nurse? 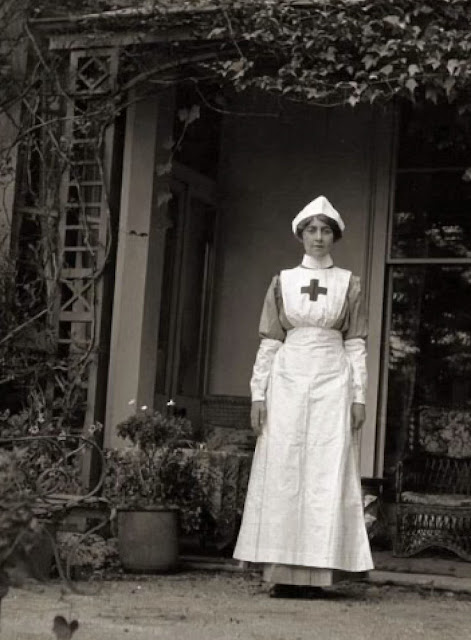 Agatha Christie involved herself in the war effort as a member of the Voluntary Aid Detachment of the Red Cross. From October 1914 to May 1915, then from June 1916 to September 1918, she worked 3,400 hours in the Town Hall Red Cross Hospital, Torquay, first as a nurse (unpaid) then as a dispenser at £16 a year from 1917 (approximately equivalent to £900 in 2019) after qualifying as an apothecaries' assistant.

According to Wikipedia, she was known for her 66 detective novels and 14 short story collections, particularly those revolving around fictional detectives Hercule Poirot and Miss Marple.  She also wrote the world's longest-running play, The Mousetrap, which was performed in the West End from 1952 to 2020, as well as six novels under the pseudonym Mary Westmacott.  Lots of other interesting information can be found here, which includes the explanation for her then famous and mysterious disappearance.

When was the first Dollar Coin made?

The following information was found here.

"The one-dollar coin is the largest circulating coin; it represents 100 pennies. When you hear the word “dollar,” you might think of the basic unit of money in the United States, whether paper or golden coins. But our first dollars were coins made of silver. The word “dollar” comes from the German word “thaler,” which was a large silver German coin.

Because lots of people around the world used these silver "thalers", American colonists were used to using the Spanish dollar, a coin often used in the nearby lands that traded with the colonies.  So "dollar" was a pretty easy choice as a name for the brand-new currency of the United States.

The dollar was one of the first silver coins made in the United States back in 1794.  Over the years, there were times when dollar coins were not made, and people used other denominations.  But the dollar coin is back in production again, only it is no longer made of silver.  Kennedy Half-Dollars and dollar coins are produced as collectibles, not for everyday transactions.  However, they may still be used as legal tender.

The coin's golden color does not come from gold, but a special mixture of copper, zinc, manganese and nickel.  This mix not only looks golden to human eyes, but looks like the silver-colored Susan B. Anthony dollar to vending machines.  Despite their different color, both silvery and golden dollars have the same "electromagnetic signature", so they can both be "read by the same machines."

Who invented the computer?

Charles Babbage was an English polymath.   A mathematician, philosopher, inventor and mechanical engineer, Babbage originated the concept of a digital programmable computer.

Babbage is considered by some to be "father of the computer", and is credited with inventing the first mechanical computer, the Difference Engine, that eventually led to more complex electronic designs, though all the essential ideas of modern computers are to be found in Babbage's Analytical Engine.  His varied work in other fields has led him to be described as "pre-eminent" among the many polymaths of his century.

Babbage, who died before the complete successful engineering of many of his designs, including his Difference Engine and Analytical Engine, remained a prominent figure in the ideating of computing. Parts of Babbage's incomplete mechanisms are on display in the Science Museum in London. In 1991, a functioning difference engine was constructed from Babbage's original plans. Built to tolerances achievable in the 19th century, the success of the finished engine indicated that Babbage's machine would have worked.

At this link you will find a timeline of the history of computers.

Which country did bagels originate from?

A popular story is that it was invented in 1683 as a stirrup-shaped tribute to the Polish king Jan Sobieski, who saved the city of Vienna from Turkish conquest.  This has been discounted which you will see if you read the explanation at the link below.  Bagels are mentioned in written records from Krakow as early as 1610.

In the United States, bagels arrived with the Eastern European immigrants of the late 19th century, but didn't emerge from mostly Jewish markets into the general population until the 1970s.  Ethnic foods were becoming trendy, and it was also when a family named the Lenders began marketing their brand of frozen bagels.  These were called "the Jewish English muffin," and television advertising followed.

My information came from here.  As for today's bagel breakfast, ours came fresh from the bakery at our local supermarket.  It is a weekend treat and our choices are the plain, sesame or Adagio.

Do you like bagels and if so, what is your favorite?

Which country has the highest rate of redheaded population?

Ireland has the highest number of red-haired people per capita in the world, with the percentage of those with red hair at around 10 percent.

In 2019 Ireland proudly hosted a party celebrating the 10th annual Kiss A Ginger Day.  This event, founded by Canadian Derek Forgie, was established as an anti-bullying campaign to help redheaded children.  The 10th anniversary celebration for Kiss A Ginger Day was held in Phoenix Park in Dublin, and the founder himself attended.  Many redheaded celebrities including Conan O'Brien and Ed Sheeran have expressed their support for the campaign through the years.

I will be back next month with another quiz.  Thanks for joining in, and have a great weekend. 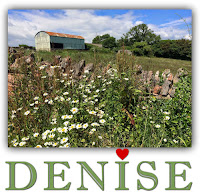