WE HAD TO REMOVE TWO OF OUR LARGE TREES, AND THIS IS A BIT OF A RAMBLE 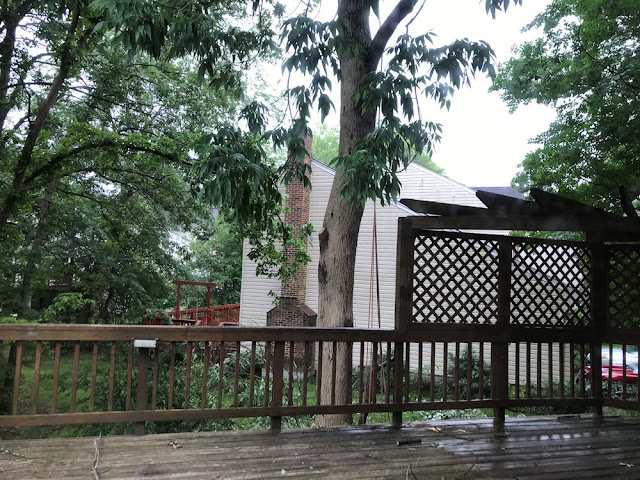 A couple of weeks ago we said goodbye to two of our largest ash trees in the back garden.  The branches of one used to hang over our deck and provided wonderfully cooling shade in the hot summer months. 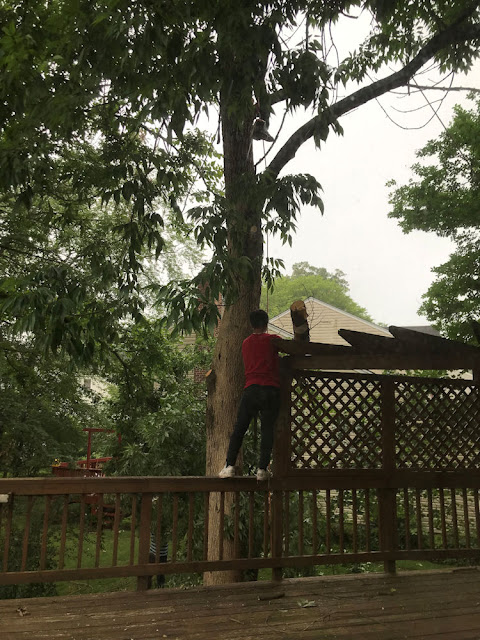 They also provided shelter for our local birds, and I watched the squirrels chase each other around the tree trunk, occasionally resting on overhanging limbs and staring down in our direction, which always amused us.  They had us well trained as this posture always reminded me I needed to refill the feeders.  Both birds and squirrels were welcome, they all got their fair share.  The branches also used to be a 'squirrel road' to the deck, and also a route over the top of our house to the other tree where they had their nests.  Fortunately they never chewed through the roof to take residence in the attic, but I used to hear them scurry across in the early morning as I was waking up.  The woodpeckers would also sharpen their beaks right underneath our window on the aluminum siding, and we woke up to their ratatat-tat until we shooed them away by knocking on the window and saying, "Thank you, we are awake now!"  We had no need for alarm clocks. 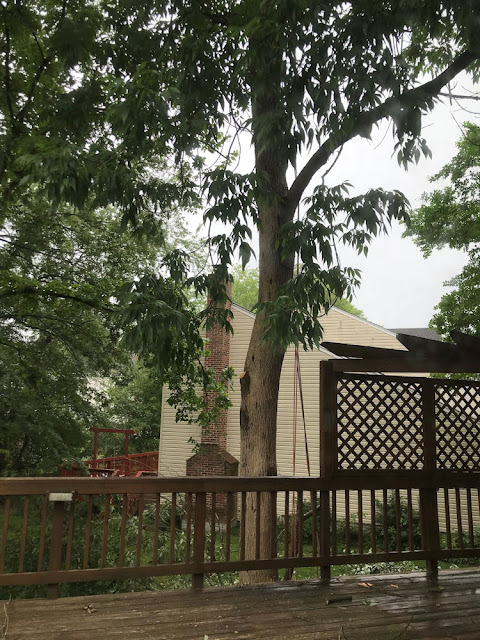 The woodpeckers also hopped up and down the tree, methodically poking holes in the trunk to bury their treasures, or feasting on anything they could find.  We had a veritable eco system in those two trees and I am a tree hugger.  I hung on as long as I could. 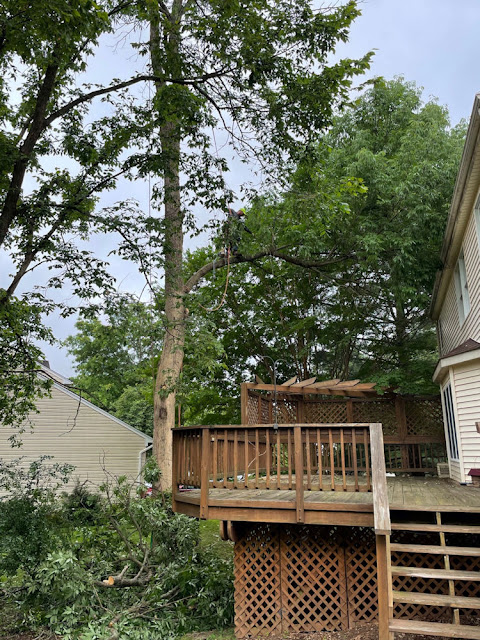 These trees were 80 to a 100 feet tall.  We had been told by a professional that they were dying, and it would be safer to cut them down.  About a year before we bought our house and moved in, a neighbor across the street told us that one of the trees had fallen on the roof. It had been in the middle of these two trees.   I took note but at that time the others were healthy. 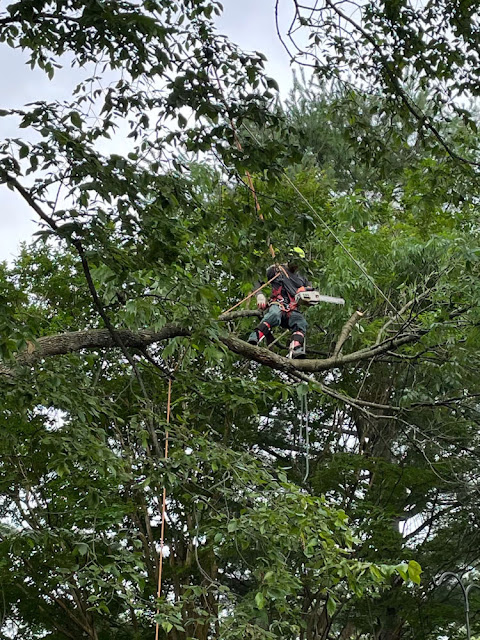 After living here for 35 years and with that fallen tree still in mind, it was a worrisome thought not for just our safety but for that of our neighbors.  They were checked regularly.  The final conversation with our expert after we had seen signs of deterioration, was that they were dying, which spurred our decision.  It was time to call in the arborist, who did an amazing job.  Our houses in this neighborhood are close to each other but he knew what he was doing, and he safely took the tree down, with two helpers checking things out below. 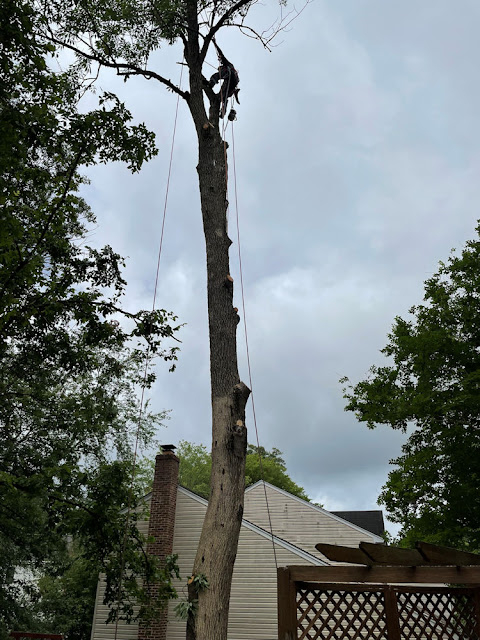 Our neighbor who is closest to us thanked us for taking them down.  We had told them in advance  what we were going to do.  We wanted to give them a head's up, so that they and their young children could stay safely away from the side of their house during the process.  There are two others on his side of the property that he also wants to see gone, and we will give him our arborist's name.  This gentleman has had plenty of work in our neighborhood, as many trees have had to be cut down over the years.  We were all impressed with his work.  He and his helpers left no mess, they cleaned everything up beautifully, and there was not one speck of sawdust or any kind of debris visible after they left.  A week later they arrived with machinery to grind up the stumps, and again left no trace. 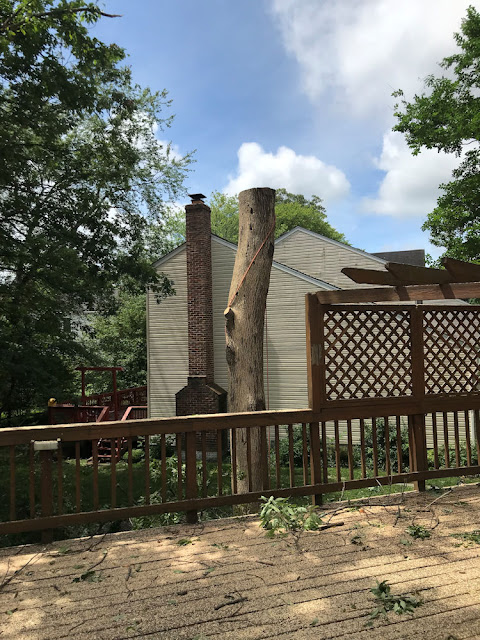 I looked out there just now and have slowly been getting used to this open area, still don't like it but it was for the best, so says my head but my heart is still missing those trees. 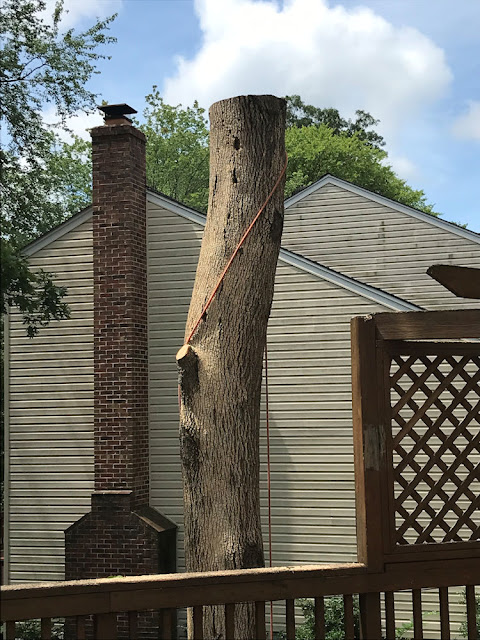 Suddenly a woodpecker landed on one of the deck balusters, and hopped up and down and pecked on it as if it were the trunk of the tree. 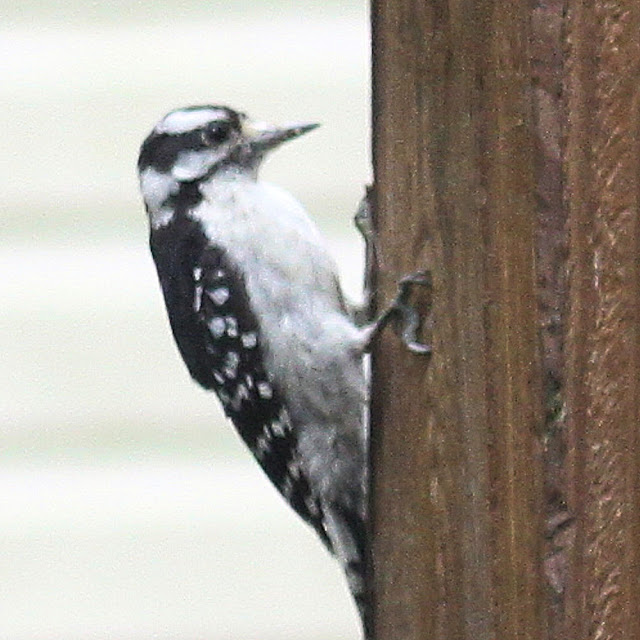 He stopped for a minute and looked at what was missing. 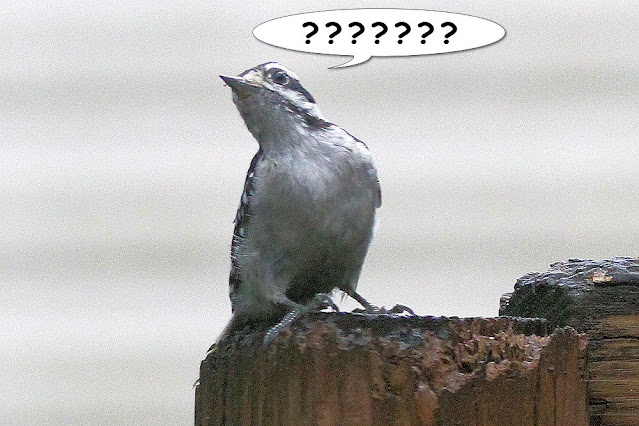 At first he was puzzled and looked in my direction. 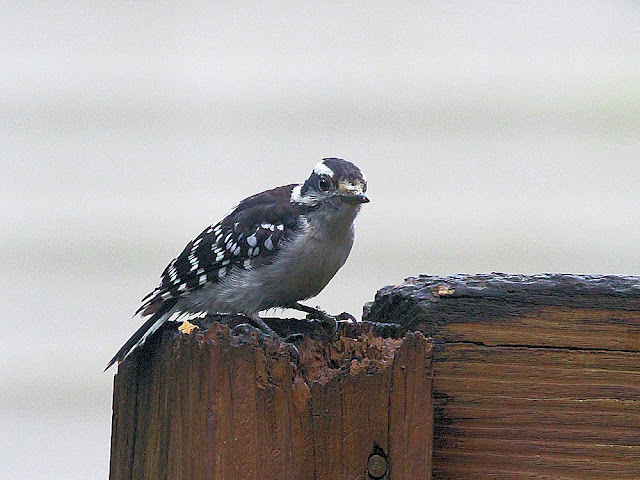 I fancied his expression was one of disgust!  Yes I am joking.  Projecting?  Very much so! 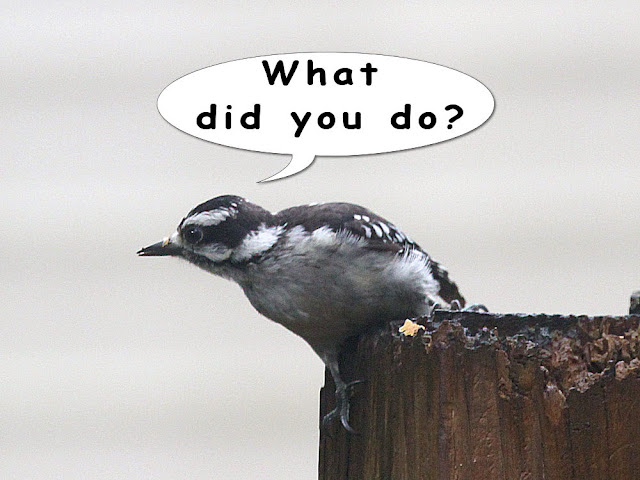 "Sorry woodpecker but I am so glad to see you" I said out loud. "Don't look at me like that, and please don't peck holes in that baluster, its not a tree trunk", this out loud and hubby laughed and I looked at him, rolled my eyes and smiled. 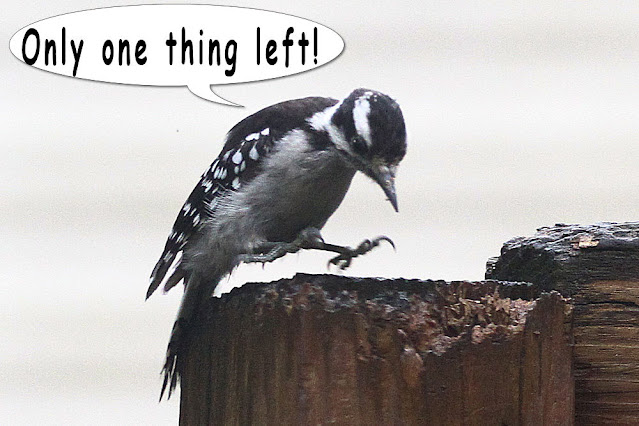 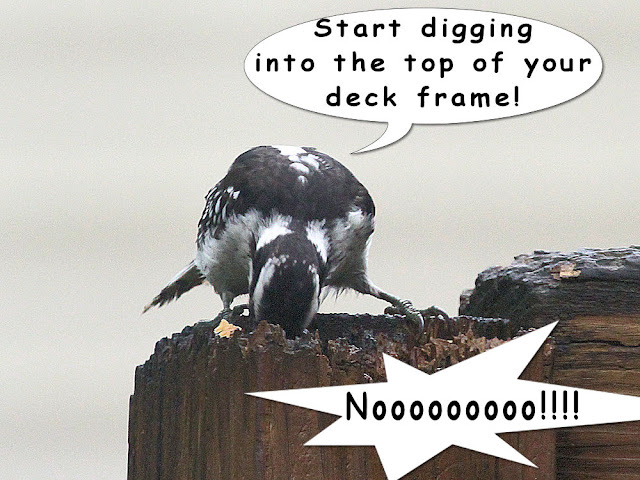 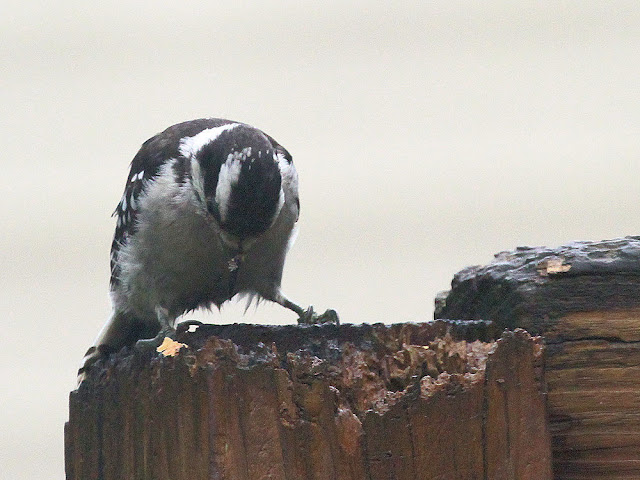 To add insult to injury the squirrel arrived the next day. 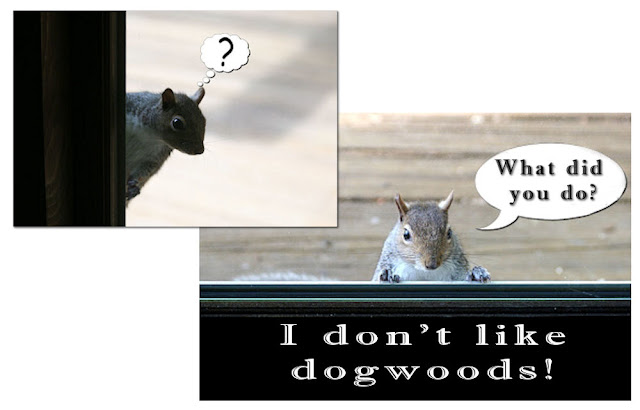 And yes, we have been talking about planting a couple of dogwoods in their place.  It will be a while as there are other projects higher on our priority list. 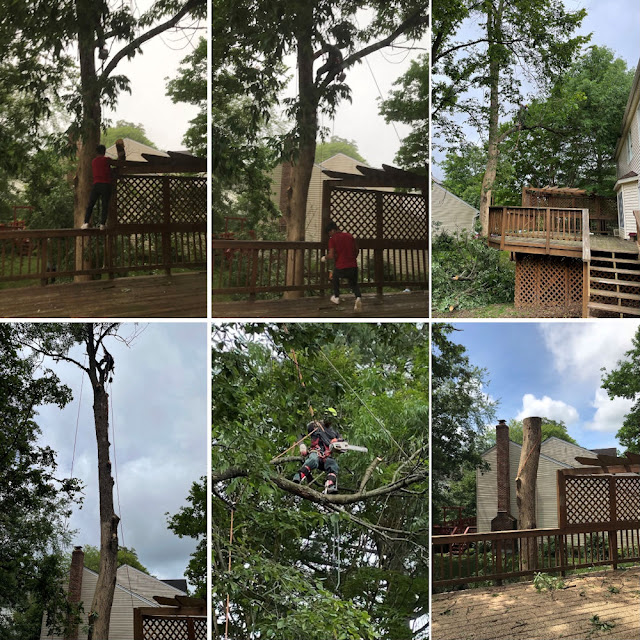 We have removed bird feeders as we will be getting the deck repaired, boards replaced, painted and sealed.  I probably won't fill the feeders until the colder months.  Thankfully there is plenty of food in the natural world.

We also keep hearing of a young bear raiding and taking down feeders not so far away, and the wildlife people have asked that none of us put any birdseed out, to encourage that bear to move on and find its territory in a less developed area.  I look out last thing at night and half expect to see the face of this bear staring back at me, with as disgusted a look on its face as I saw on the woodpecker, and yes I am joking?

All smiles aside, I am thankful we, our neighbors included, are a lot safer because of the removal of those trees.

And we will replant so stay tuned little birdies and squirrels, and please go find your beautiful human-free forest little bear!  I'm thinking you are going to have to travel a long way.

Thanks for looking and enjoy your day!