I am beginning with a few sights that greeted us as we walked through the wood.

A Fairy Door?  This was from a very tall tree which was hollow.  There were several holes like this one, inviting woodland creatures to take up residence, or fairies says I with a smile?  I stared into the various holes, and fortunately no eyes stared back at me in the darkness. 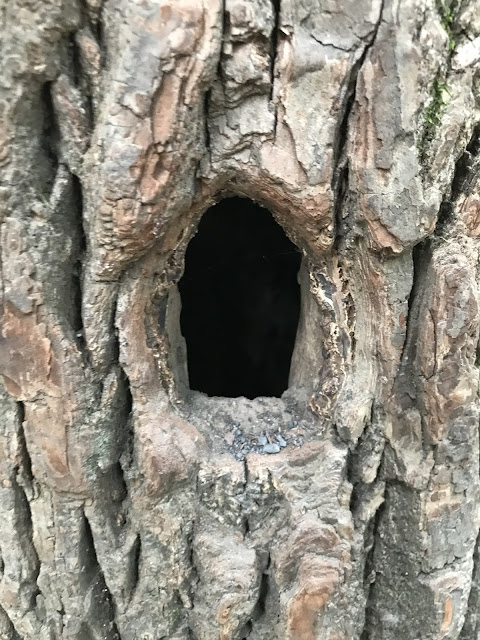 I saw two signs where people had begun to trample down the fauna and start their own trail.  There was a polite sign asking them not to do so, to protect the habitat. 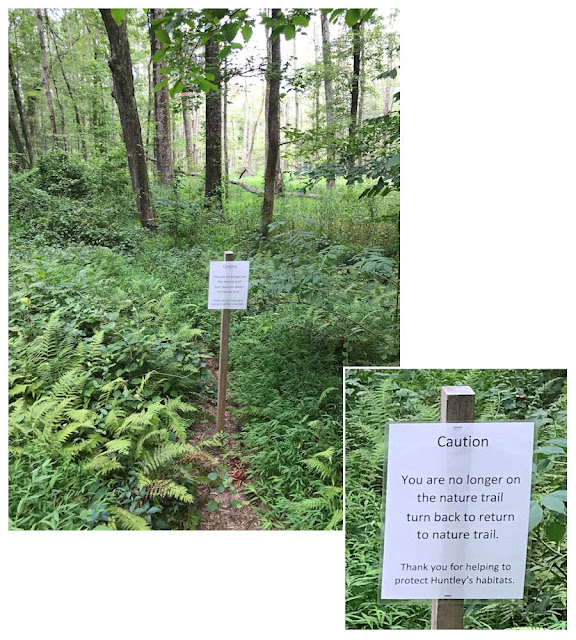 We both said that the park was as lush and vibrant as we had ever seen it.  This is called a New york fern, a species of Parathelypteris.  Botanical name: Parathelypteris noveboracensis.  You can find more information here. 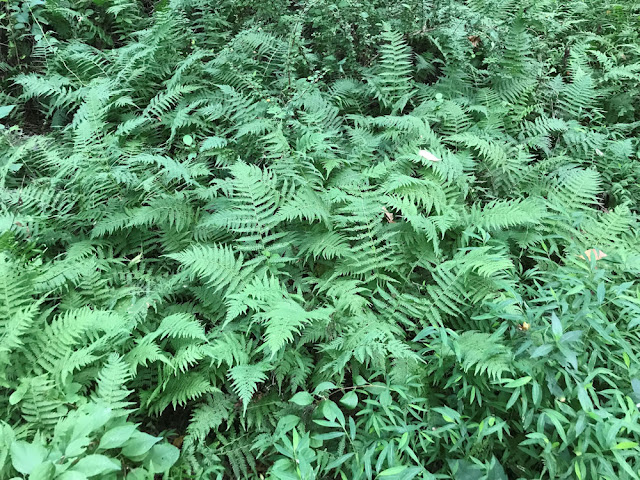 We have reached the boardwalk.  There are rules posted but there is a path on the left that you can take through more of the woods, if you have your dogs or anything else not allowed. 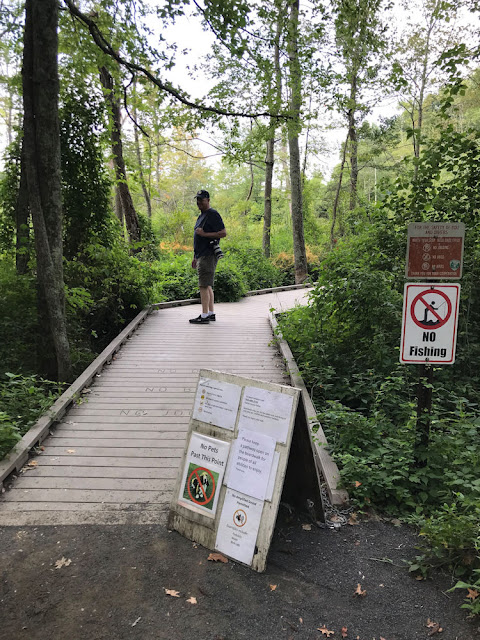 In all the years we have been coming to the park, visitors have been very considerate.  I did see a dog once but that was a long time ago, before this sign was posted.  The dog was very well behaved and rather sweet, but then it was in the winter time and there were no birds close to peek its interest. 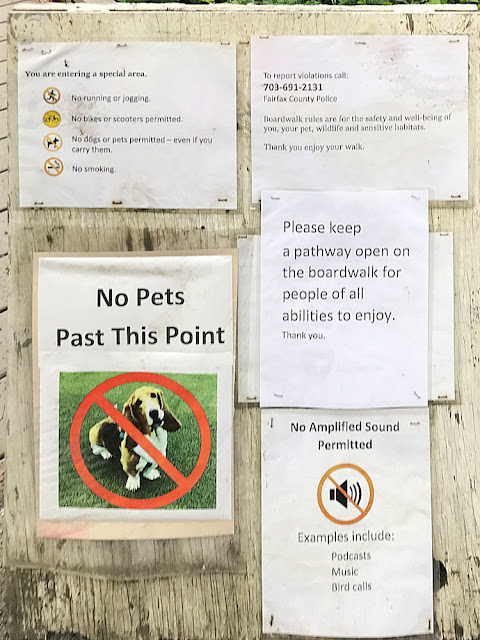 Next are Cardinal flowers, a species of Lobelias. Other names are Scarlet lobelia, Red-lobelia and Cardinal flower lobelia.  Its botanical name is Lobelia-cardinalis. 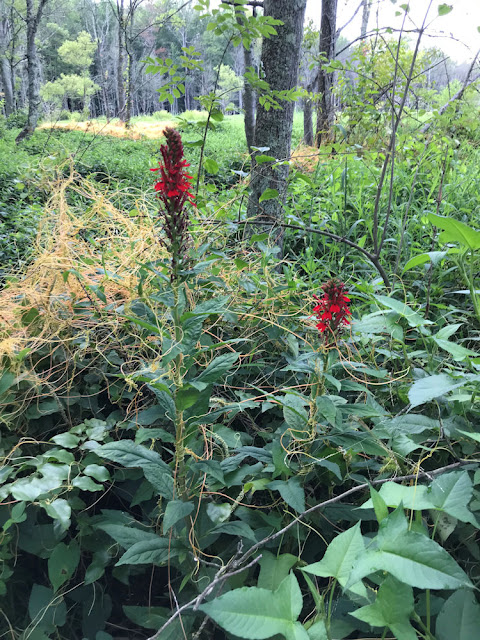 One of my favorite wildflowers, it is a brilliant red, a native wildflower that grows in marshes, stream banks and low woods.  It is also a member of the Bluebell Family, and was named after the Flemish botanist, Matthias de L'Obel (1538-1616).  It blooms from July to September.  My information came from this link. 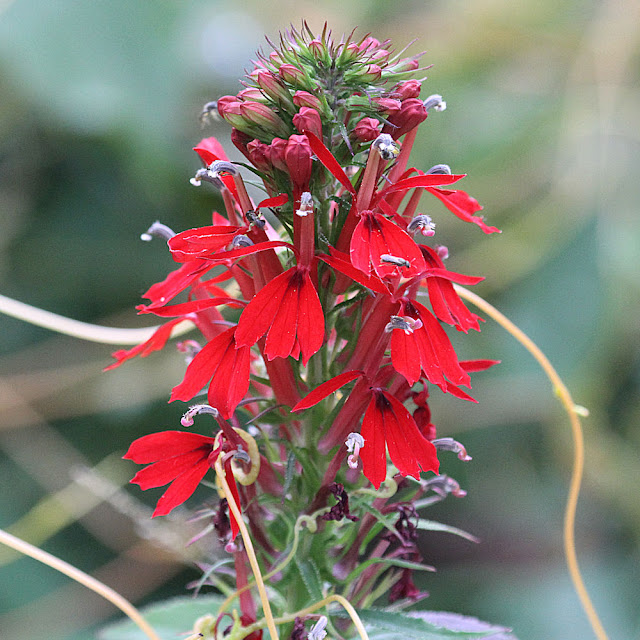 We noticed the water level was down, perhaps due to beaver activity.  There were signs of their engineering work (dam building) the last time we were here.  It is different every visit. 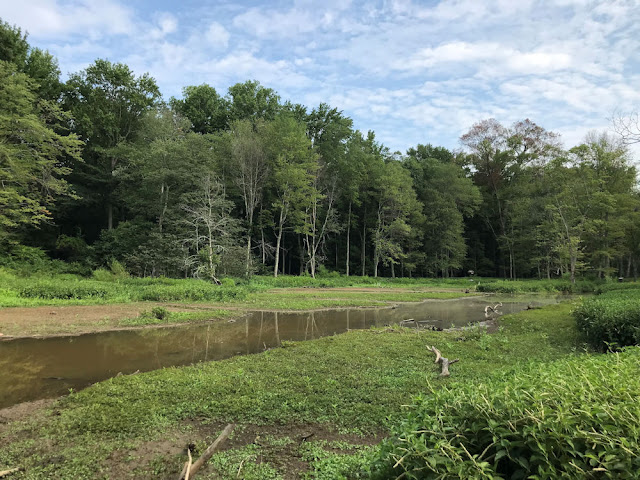 This interesting orange 'carpet' is a Dodder vine. 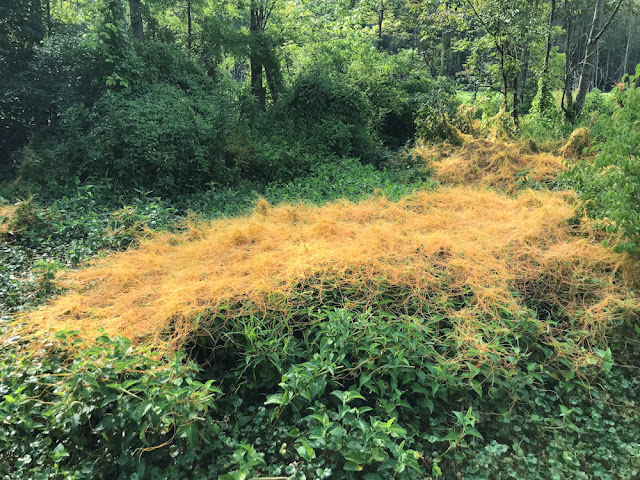 It is a slender annual vine that wraps itself around other plants, and is found in many states.   According to this website there are over 50 native dodder species listed that are known in the United States and Canada.  I have only ever seen this type grow at Huntley Meadows, so to me it was a surprising sight when I first saw it. 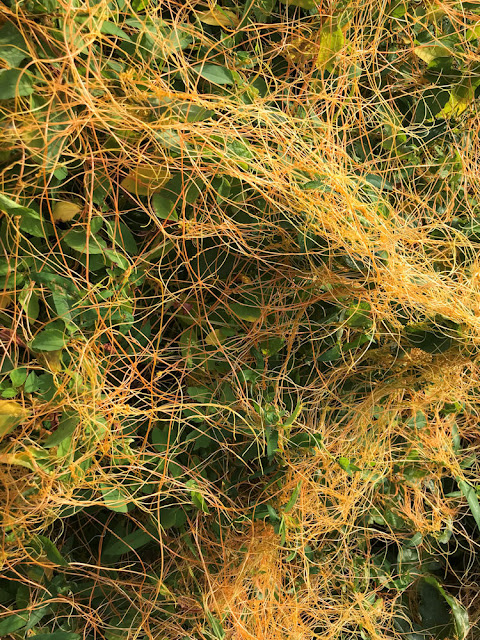 It was everywhere.  The white flowers seen in the photos below are Rose Mallow. 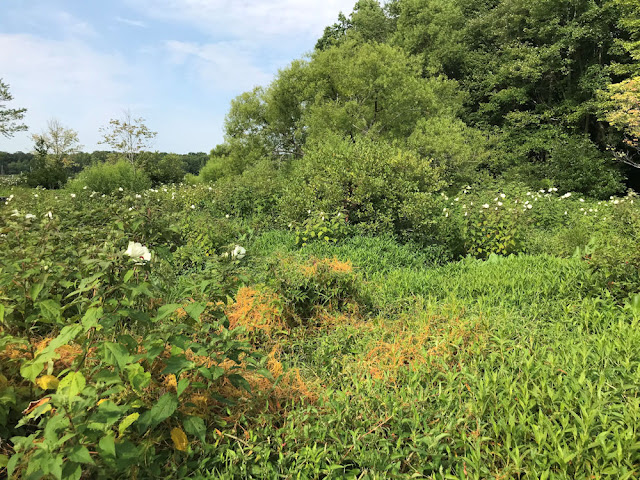 The Common rose mallow (Hibiscus moscheutos). We came at a great time as they were blooming everywhere.  I overheard a lady say that they hadn't yet reached their peak. 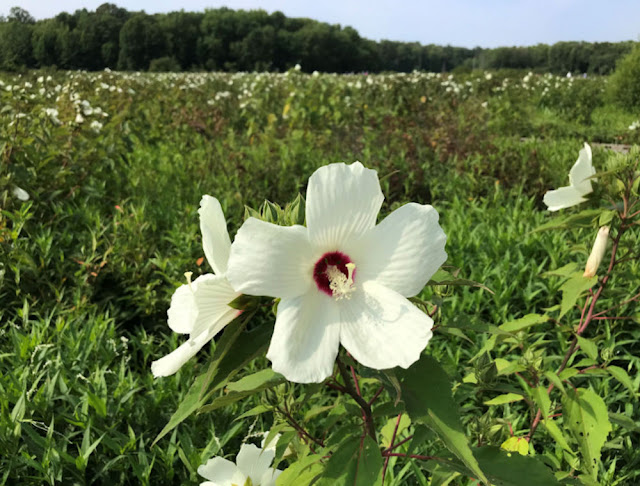 These lovely flowers will be blooming until September.  The bloom is larger than okra, cotton or hollyhocks, all of which are members of the mallow family.  The flowers are usually white or pink, but may also be a pale yellow (the only ones I have ever seen are the white).  All have the red or maroon center and the longish column of stamens. 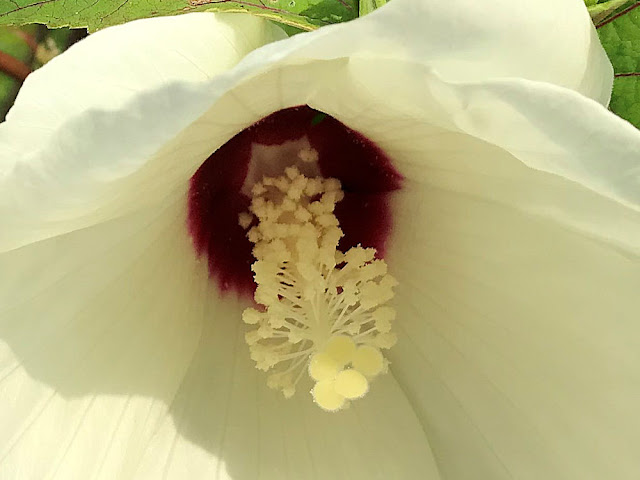 Many species of butterflies and humming birds are attracted by the Rose mallow's nectar, but apparently it is deer resistant. 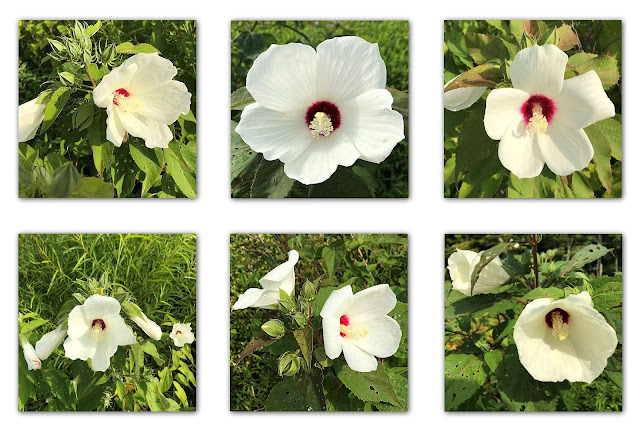 "Hibiscus" is the Greek name for mallow, and "moscheutos" means "scented like the musk rose".  Many of the hibiscus are called "marshmallow" because of their family relationship to Althaea officinalis, a plant introduced from Europe from which marshmallows were made (now produced from corn syrup and gelatin). 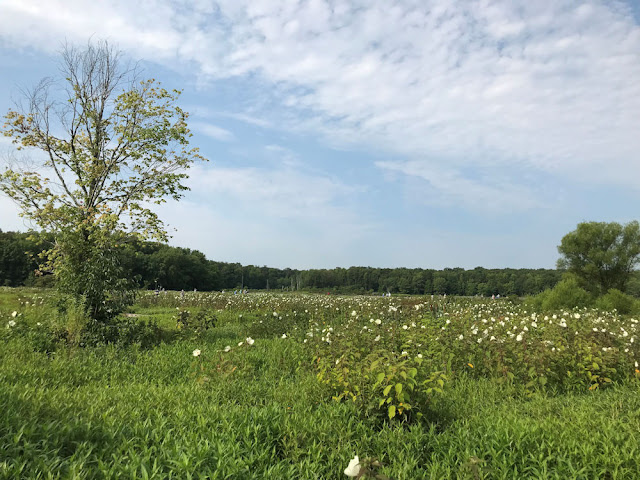 Getting away from flowers for a little bit, we saw this.  It was a large Snapping Turtle and I noticed he had quite a lot of moss growing on its back. 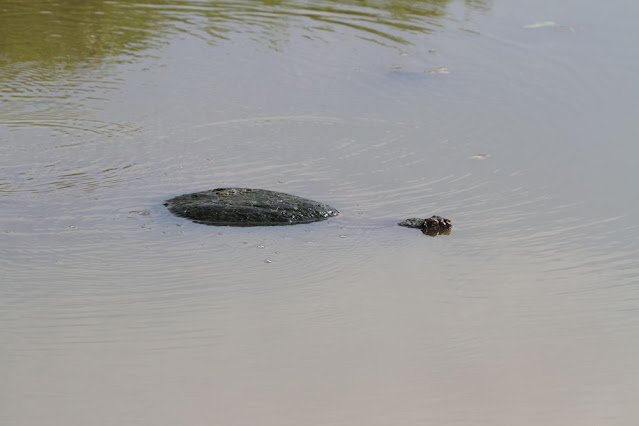 I wouldn't make a guess at its age but I did read that they can live up to 70 years.  It takes the average common snapping turtle 15 to 20 years to reach maturity. 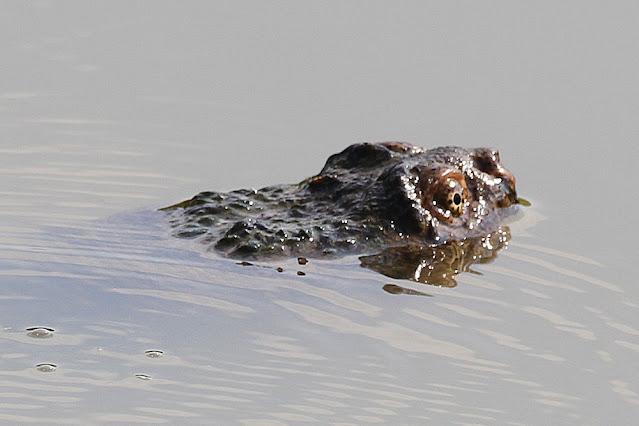 Their eggs are white and perfectly round, like ping pong balls.  They can lay anywhere from 20 to 60 eggs in one clutch.   You can see what one looks like if you go to this link.  They are very prehistoric looking.  If you ever want to help a snapping turtle, there is a good video here that shows you the safe way to handle one.  An  interesting fact I learned is that they cannot retreat into their shells like other turtles. 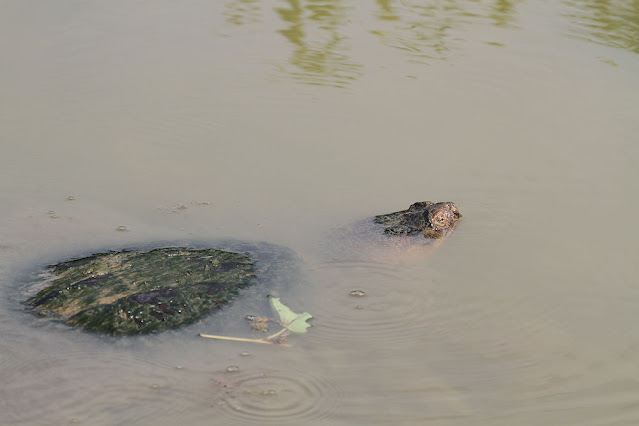 That's all for today.  There will be another from this visit.  I have many posts from Huntley Meadows over this blog's lifetime, and if you would like to take a look at them, you can click on the label at the end of this post entitled "Huntley Meadows Park_Alexandria_Virginia".