This is an old post from my original blog (long since closed).  I am slowly transferring all my old posts to this one.  Today shows the North American Beaver that we used to see regularly on our visits to Walney Pond.  These were from June 5th, 2009.  The lodge has disappeared since, whether it was dismantled or removed by nature, I don't know. 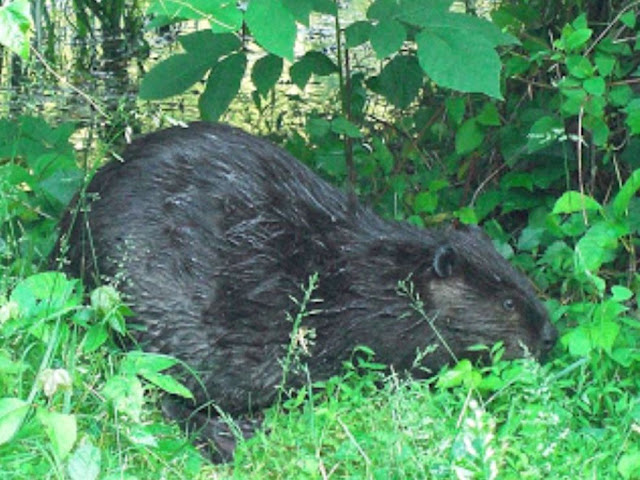 Described as "Nature's Little Engineer", the North American Beaver is considered to be the second largest rodent in the world (after the capybara).  Beavers are primarily nocturnal, though we saw ours in the early evening and still in the daylight hours.  From what I read, they are split into two extant species of the North American and Eurasian variety, with location of birth being the only real difference between the two.  Beavers generally have a large body and small head (like most rodents), a broad, flat and scaly tail and webbed hind feet.  Due to their small ocular cavities and nocturnal lifestyle, beavers have poor eyesight, but possess enhanced senses of hearing, touch and smell. 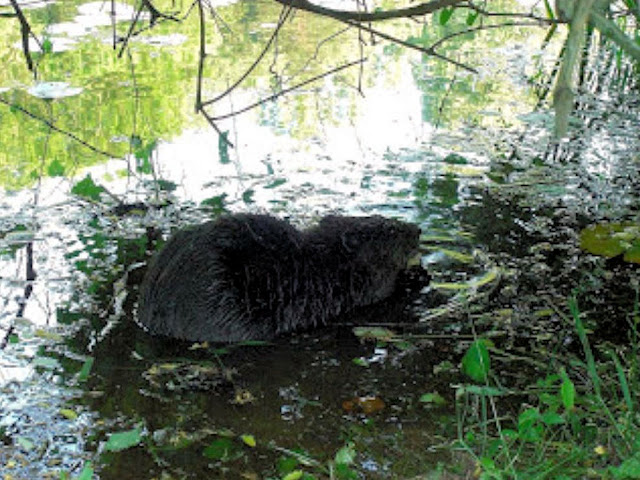 Living off an herbivore's diet of wood from quaking aspen trees, cottonwood tree, alder trees, willow trees, birch trees, maple trees, cherry trees, pondweed, sedges and water lilies, beavers can grow up to 55 lbs. (25 kg) before they pass away at around 24 years of age.  Often female beavers will grow larger than the male, which is uncommon amongst mammals. 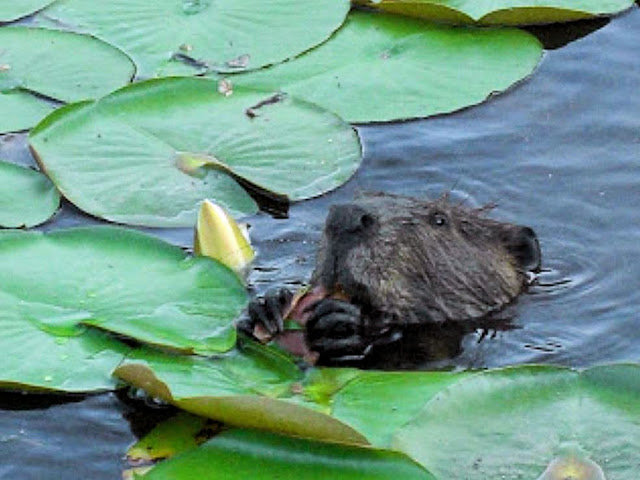 The person who coined the phrase "Busy as a Beaver" was spot on.  He or she very industriously chewed on the lily pads off their stems and either ate them right there, or swam to shore and took them back to a spot underneath a tree.  He immediately came back and repeated the process dozens of times. 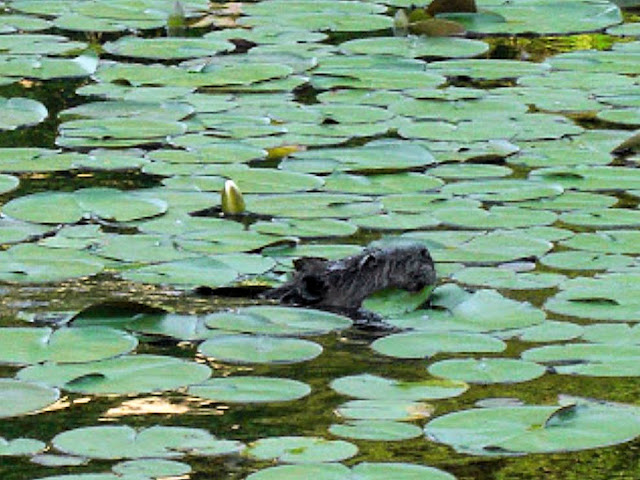 Online I read: "Beavers who inhabit smaller streams or ponds will make lodges so they can be active all winter and as a defense against predators.  The lodge will be made primarily of mud and branches." 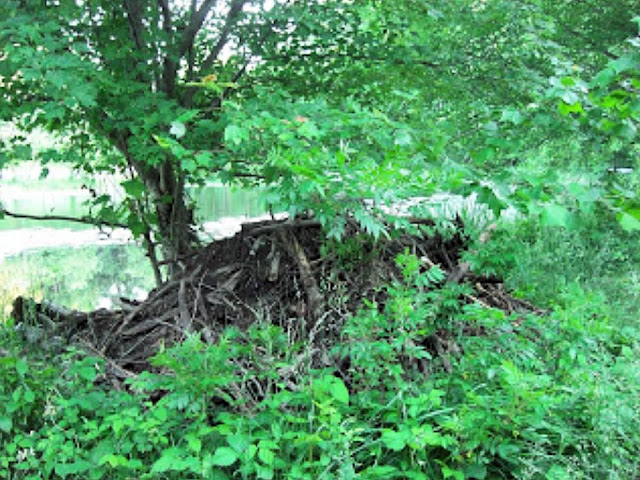 "A beaver's front feet have five fingers and are very skilled at manipulating objects.  They can take a twig no bigger than a pencil, and twirl it around like a corn on the cob as they nibble off the bark." 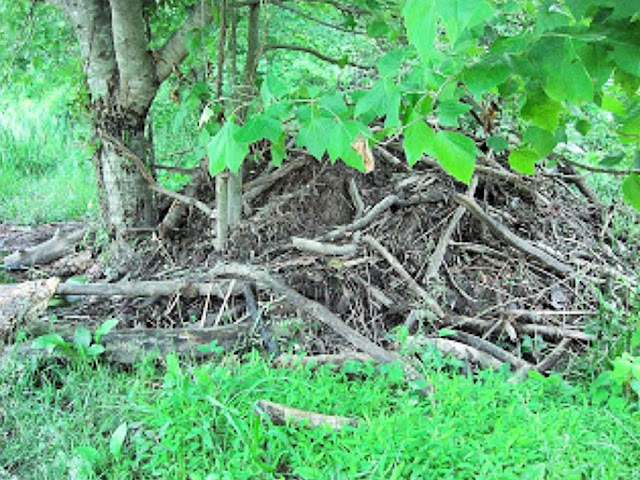 "A semi-aquatic animal, beavers can stay under water as long as 15 minutes when necessary, and often do so when startled or frightened.  When in danger in the water, a beaver will rapidly dive under the surface by slapping its wide tail on the water.  The sound will be audible over a large area, warning other beavers, who will also dive down and avoid trouble.  Despite this amazing defense mechanism, they are far more well known for their natural ability and propensity towards making dams on rivers and steams.  Beavers prefer to live in mini-ponds, so in the absence of these small bodies of water, they will make their own.  Using their powerful front teeth (which grow continuously to avoid being worn down, are self sharpened almost into chisels, and are composed of hard orange enamel in the front and softer dentin in the back), beavers will cut trees and plants to both build and eat.  They will then make two vertical posts in the water, then fill that in with a crisscross of branches, weeds and mud, until the dam impounds enough water to make a "lodge".  Beavers are also known to make canals in the water in order to transport materials that they otherwise couldn't move over land."  Below is a diagram I found of what a lodge looks like inside. 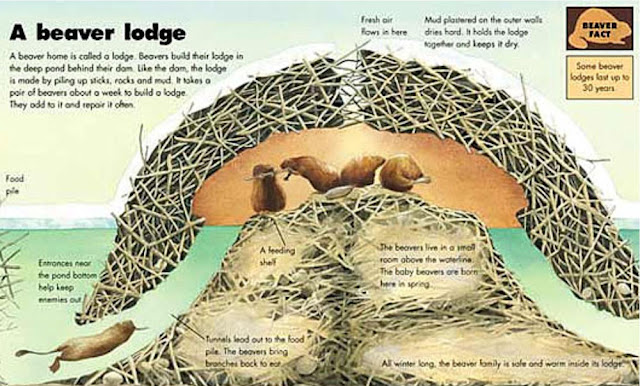 If you want to learn more how the beaver builds its lodge and dams, there is a great YouTube video called "Beaver Lodge Construction Squad" from David Attenborough's BBC Earth.  Link here if you would like to take a look. 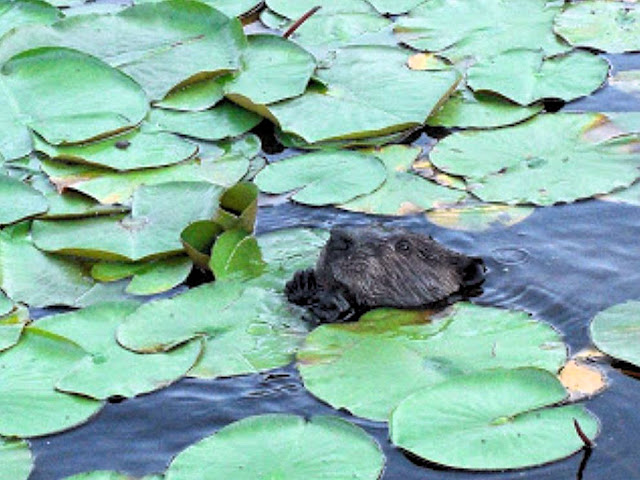 "The front teeth (incisors) of a beaver, or any other rodent, grow throughout the life of the animal.  The front surface of the incisors is made of a very hard enamel that is dull orange in color.  Since the back part of the tooth is not as hard, it wears off first, resulting in a chisel-like shape which for a beaver is perfect for the task of felling trees and stripping their bark.  A lone beaver can fell an 8-foot tree in 5 minutes." 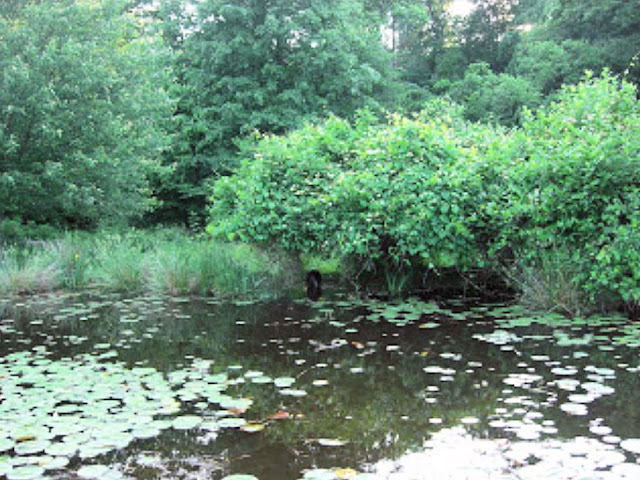 "Beavers are highly social animals.  They live in family groups consisting of the parents and young of the year and two-year old offspring.  Litter sizes average three, so a family of eight beavers would not be uncommon." 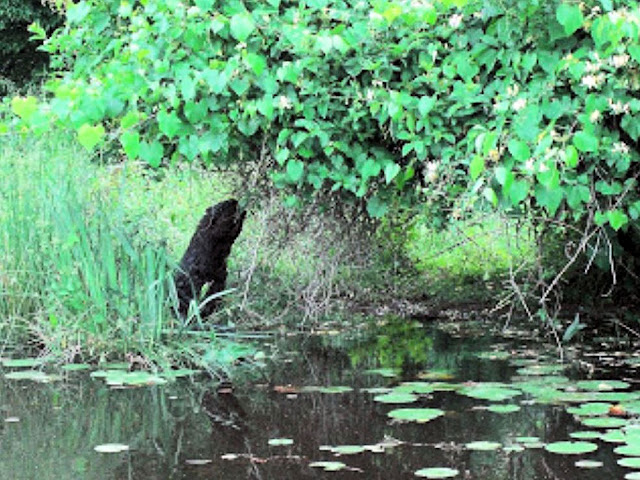 Finally, our beaver retreated to shore.  We watched as it stood on its hind legs and chewed off a few lower branches off the tree, and then disappeared out of sight.