ONE FROM THE ARCHIVES, A TRIP AROUND THE OLD CHURCH, WIDECOME-IN-THE-MOOR.

These were from the Spring of 2015.  Whenever I have gone back to my old home in the UK, I have always headed to Widecome-in-the-Moor, within the Dartmoor National Park. 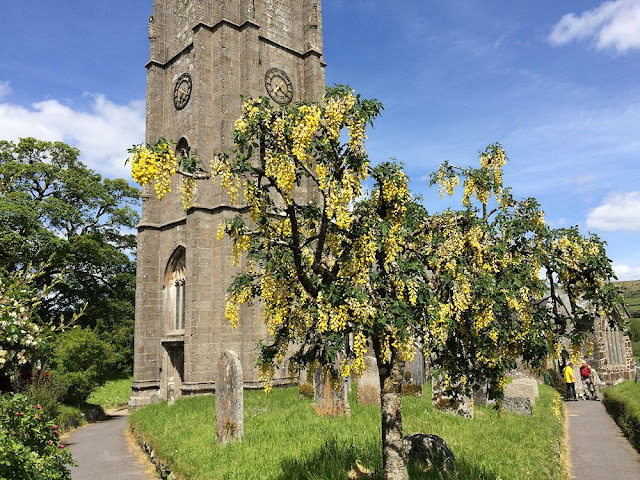 I have been visiting Widecome-in-the-Moor since I was eight years' old, when my parents took us down to Devon for our holidays.  Eventually when we moved there when I was 15, Dad would often point the car to the Moors where we drove all over them, looking at the Dartmoor Ponies, climbing up Haytor, and then on to Widdicome-in-the-Moor for an afternoon tea.  It was always on the list of places to go.  We loved the Moors and we loved Widecome-in-the-Moor.  It holds many fond memories as I took Gregg there on our first date (we spent the day together two days after we met). 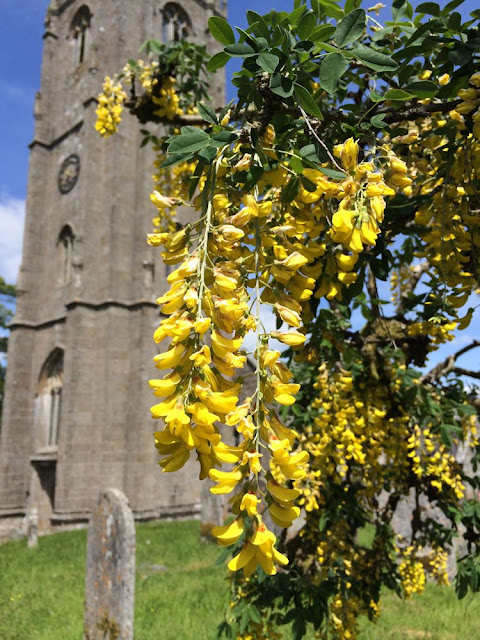 You can read about the village for yourself here if curious, and also if you like to look at places for sale, I found a farmhouse that I would like to buy in my second lifetime.  Not in my league but maybe in that next lifetime I will come back as someone who can afford such a place.  Oh my!  Yes this is a bit of tongue in cheek, but it is lovely to look at.
The name of the village, according to Wikipedia,
"is thought to derive from 'Withy-combe', which means Willow Valley.  According to the village's official website, at the time of the article, there were 196 households in the village, though its parish stretches for many miles and encompasses dozens of isolated cottages and moorland farms."  It brings in a lot of tourists during the year and can get quite crowded in peak season.  "The village is well known for Widecombe Fair held annually and is celebrated by a folksong of the same name, featuring "Old Uncle Tom Cobley and All.""
Added note: I often remember this phrase being used when describing how many people were invited to an event.  "And you know, there was Uncle Tom Cobley and all".  It is usually said when exasperated at the large group of people at any one gathering.  Not being one for crowds I used this phrase on occasion.  I can feel very closed in and panicky at such times, even more so if it is very hot and there you go, my secret is out! 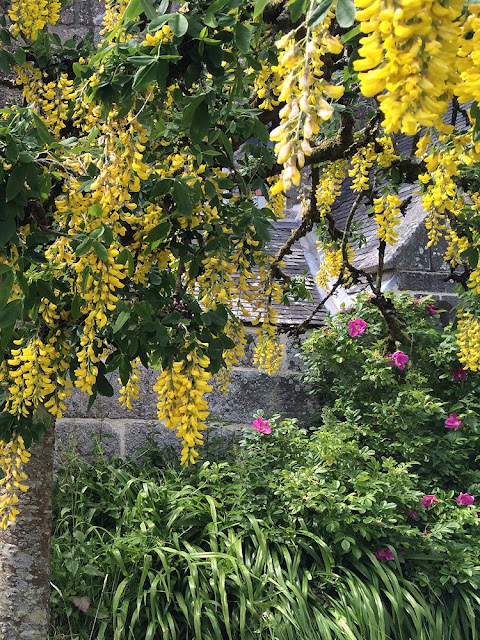 The Church of Saint Pancras, where my photos were taken, is also known as the "Cathedral of the Moors" in recognition of its 135-foot tower and relatively large capacity for such a small village.  It was originally built in the 14th century, and was enlarged over the next two centuries, partly on the proceeds of the tin mining trade.  Inside the ceiling is decorated with a large number of decorative roof bosses, including the tinner's emblem of a circle of three hares (known locally as the Tinners' Rabbits).  It was badly damaged in the Great Thunderstorm of 1638, apparently struck by ball lightning during an afternoon service.  The building was packed with about 300 worshippers, four of whom were killed and around 60 injured.  Local legend relates that the disaster was caused by a visit from the Devil".  And that's a little bit of history about this church. 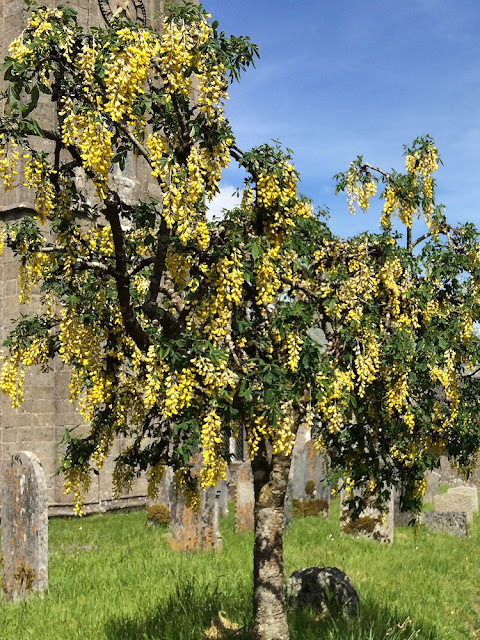 I remember being very happy to see this flowering tree in bloom.  It is called a Golden chain tree, also known as Common laburnum, Laburnum and Bean tree.  This one was quite tall but they can grow 25 to 30 feet.  It is a small deciduous tree and can be toxic to people and animals.  There is a website here where you can get more information.  I am always very surprised when I see something as pretty as this, only to find out that it is very toxic but I suppose that applies to a lot of flowers and plants.  Apparently hares and deer can feed on it with no problems.  All that being said it was a beautiful tree and those yellow blooms were so very pretty.
If you type Widecome-in-the-Moor on Google using Images, you will get some great photos.  My post here (6th photo down) has a photo I took of the church looking down into the valley.
The last time we were there was with my niece and her husband in 2015, when these photos were taken.  We plan another trip back to the UK in the not too distant future.  And hopefully, when the world settles down a bit, we will be going back to Widecome-in-the-Moor.
Thanks for looking and enjoy your day. 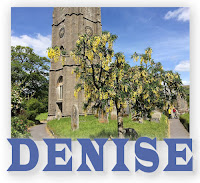