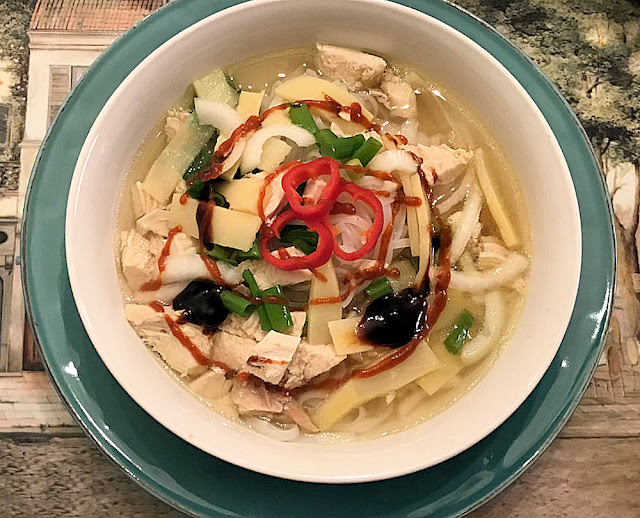 My Sweet Other Half has been hankering for Pho Soup.  We used to get this amazing Beef Pho at a Vietnamese restaurant a few miles away, but we haven't been to any restaurant in a very long time.

However, the other day he follows a lady on Facebook who does these wonderful dishes, and one of them was Chicken Pho.  "Let's put a chicken on the next shopping list!" he says.  "Okay!" said I, along with a few other ingredients that we don't have on hand in the pantry. This is new to us as we always ordered the beef, but he wanted to give it a go.

We forgot a few things which I will tell you about at the end of this recipe, there always seems to be something, but this soup was still delicious, and I imagine will be even more so with those ingredients we forgot all about.

I found Marion's blog - crafted by Marion's Kitchen -  and her recipe is at this link.   You can see her actual pho recipe video on YouTube here.  It helped us to see the visual first.  She's great, she has a lovely personality, easy to follow and easy going all round. 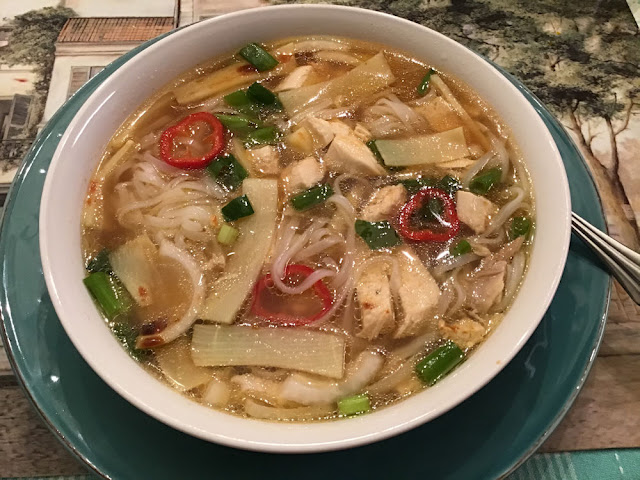 2 teaspoons of sea salt, plus extra to taste

To serve you will need:

Dry-roast the onion and ginger in a frying pan over high heat.  Cook until the onion starts to blacken in some spots, and the ginger is fragrant and starting to color.  Add the cinnamon stick and star anise and cook for a further minute or until fragrant.  Remove from heat and set aside.

Place the chicken in a large pot.  Cover with water and place over a medium-high heat.  Add the onion, ginger, spices, salt and fish sauce.  Bring to a gentle simmer.  Use a ladle to scoop out and discard any foamy scum that rises to the surface.  Then reduce the heat to low and gently simmer for one hour, removing the foam from time to time.  Remove the chicken from the broth and place on a cutting board.  You can test if the chicken is cooked by inserting a skewer into the thigh.  The juices should run clear.  If not, place the chicken back into the simmering broth and cook for another 15 minutes.  When the chicken is cooked slice the meat and discard the bones.  Set aside until ready to serve.

Strain the broth and pour it back into a clean saucepan over medium-high heat.  Taste and season with extra salt and fish sauce (the amount of seasoning will depend on the amount of water you needed to start).  Marion said she found at least 1 teaspoon of each is usually needed for the best flavor.

To serve, cook the noodles in boiling water until tender (our packet said to cook them for 7 minutes which was just right.  We were wondering if other rice noodles might take a little less time.)   Divide noodles between your individual bowls.  Top with the chicken and slices of onion.  Ladle your broth over all.  On top of broth add sliced spring onions and bean shoots.  Serve with basil leaves, lime wedges and chili slices. 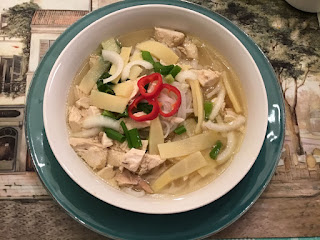 This was a delicious soup.  We made a lot of broth.  When we first made it there was an overflow for the container we were using and I stopped himself from throwing a small amount down the sink.  I was feeling chilled all day, and we needed to taste-test anyhow.

"Don't throw those onions out either please" I said.  I am my father's child, this was one of his favorite things to do after we had a broth cooked with onions that he would not let be thrown away.  It made a nourishing hot drink later, as was the case with any broth say from the cooked cabbage, with a little salt and a lot of pepper added.   I am not sure if anybody else does this, but my family did.  My Grumpy Bear mug was ready and waiting for this broth.  Even I was surprised at its wonderful taste and knew that we had a winner.

Even with all the skimming from the top of the broth as we made it, there was still a thin layer of solid fat on the top the next day.  I took that off very easily with a large spoon before I heated it up for our next meal.

We normally add sriracha and hoisin sauce to our pho, usually in a swirl and stir it in, adding enough to suit our taste.

If you are not familiar with star anise and can't find it in your local store, this link will take you to the site for purchase, or at least to look at what it is like.  I would check at your supermarket first, in the herb section or the Asian food aisle.  The next picture shows you what it looks like and is what we bought.  It's very pretty to look at and is used in many Asian dishes. 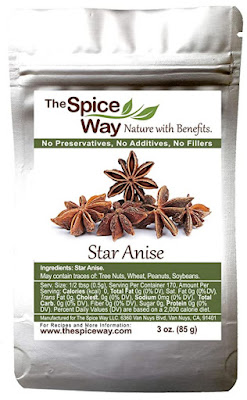 I am telling you about the things I forgot to put in, just to let you know that when we mess up and miss out, things can still turn out tasty.  We used the bean  shoots which were nice, but next time will buy beansprouts.  This is what we have always been served when eating pho and we missed them.

I couldn't get any Thai basil as our usual grocery market didn't have it.  I had bought fresh Cilantro a couple of weeks' ago, which I froze.  It could have been used instead of the basil, forgot that I had it in the freezer. Forgot the squeeze of lime juice over everything too.  I actually quartered the limes and put them in the fridge so that they would be ready to go.  We had to smile as Gregg told me later he took our quartered limes out of the fridge and put them on the table. We were talking and eating at the same time, so our eyes didn't even go there.   It was one of those days.

But even with all that, this soup was extremely flavorful and great on the taste buds.  Thankfully there is a lot left over so we can try again with the additions tomorrow.

Definitely trying this again and will also make with beef.  It was a lot of fun to make too. Thank you Marion!

Added note: it's all gone now.  Our second bowl of soup had all the above additions and it was wonderful.  After a third meal we had no more chicken left but there was still enough broth for a couple of nights.  Nothing better than a cup of hot broth when you're feeling chilled to the bone, especially this hot broth. The flavor was something else.

A lot of ramblings about this meal but I wanted to remember everything for the next time, and forget nothing!

Thanks for dropping by and I hope your week is a great one.