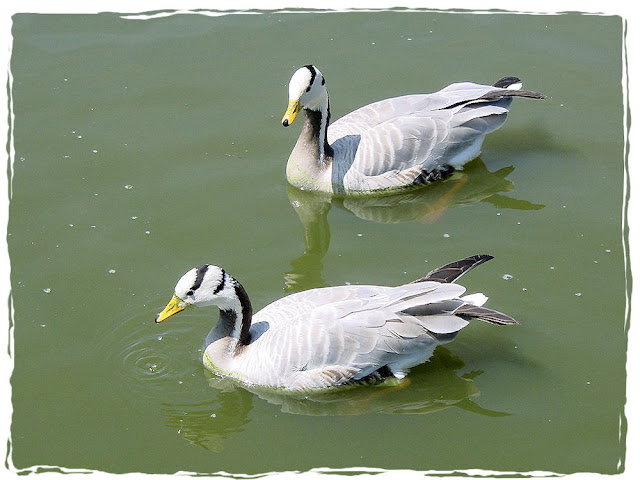 This is an old photo from April 2008 of a pair of Bar-headed geese.  I found them on a lake at a local, privately owned zoo.  They had a whole variety of different geese and ducks there but these two caught my eye on that trip.

I found very interesting information at a website called The Spruce, and if you are curious about these birds you can click here.

I gleaned a few interesting facts about them.

"They are one of the highest flying birds in the world and can fly above the Himalayan Mountains when it migrates, at heights that may reach 30,000 feet.

These geese have a low honking call they use almost continuously in flight.  On land softer calls or small trills can occasionally be heard.

They are found in much of Asia and migrate seasonally.

These birds are also part of exotic waterfowl collections throughout the world, including zoos and aviaries.

Some feral populations have been established, most notably in Spain, Belgium and Finland, but regular escapee sightings are also recorded in Canada and the United Kingdom.  Rare escapees may be seen nearly anywhere.

During the breeding season, bar-headed geese can be found in appropriate habitats in Mongolia, western China, Kyrgyzstan, eastern Afghanistan and northeastern Pakistan.  In winter bar-headed geese migrate directly across the mountains to their wintering range in central Pakistan, India, Myanmar, Nepal and southern China, generally favoring lowland areas in winter."

I found it so very interesting to learn about this goose.  There is much more information about them at The Spruce. 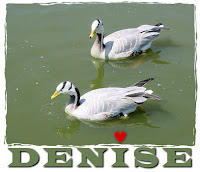 Posted by DeniseinVA at 4:08 AM