This is a continuation from last week's post.  I dived into my archives and found a series of photos of raptors.  They were shown at a demonstration given by The Raptor Conservancy of Virginia.  My photos and information are several years old, and there may have been changes since written. 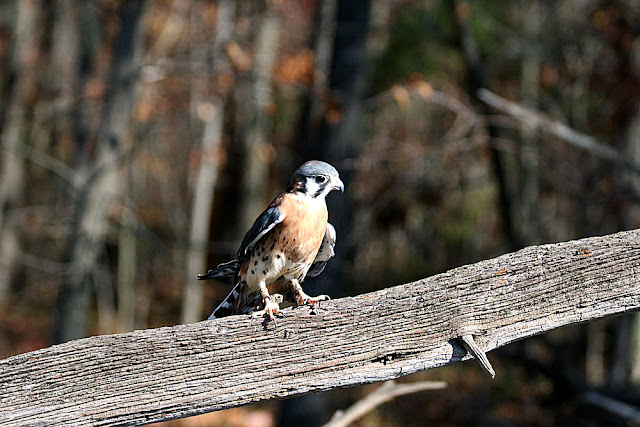 I had an amazing opportunity to photograph birds used in their education program. You can see my other posts from this day here and here.  This post is about an American Kestrel named "Little Guy". 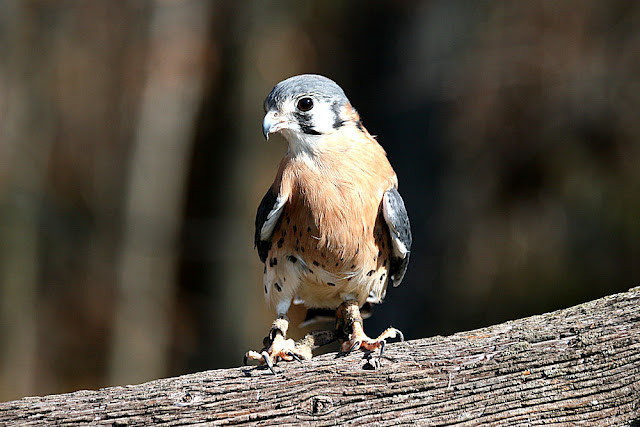 It was the first time I had ever been this close to an American Kestrel, having only ever seen them on nature shows on TV, and from photographs in my collection of nature books. 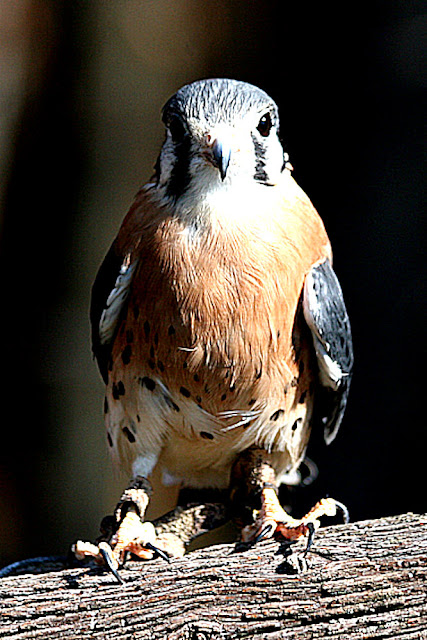 Little Guy's story was that he hit a window of the U.S. Capitol at high speed. Sadly he permanently damaged his wing and both eyes, but he was receiving a lot of love and attention at the Conservancy, and had adapted to his new role of avian ambassador. Before I became interested in birds, I had no idea that each one had a personality. Little Guy showed his beautifully. He was very entertaining and very cooperative as we were told all about his kind. 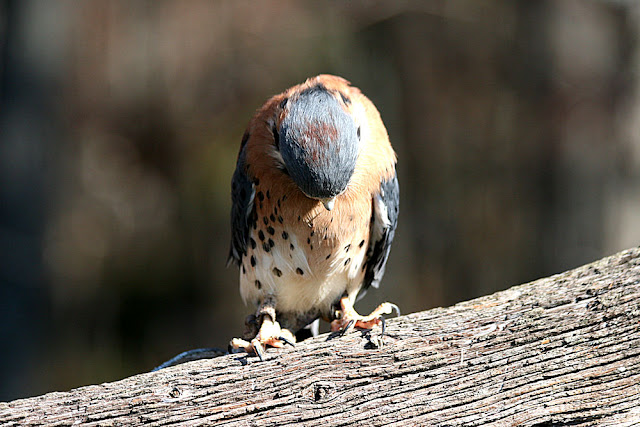 In the photo below you can see where he fluffed his feathers out suddenly. He also had a habit of bobbing his head up and down, which we were told was a sign of pure contentment. The American Kestrel (Falco sparverius), is sometimes known as the Sparrow Hawk, is the most common falcon in North America, and is found in a wide variety of habitats. It is a small falcon and the only kestrel found in the Americas 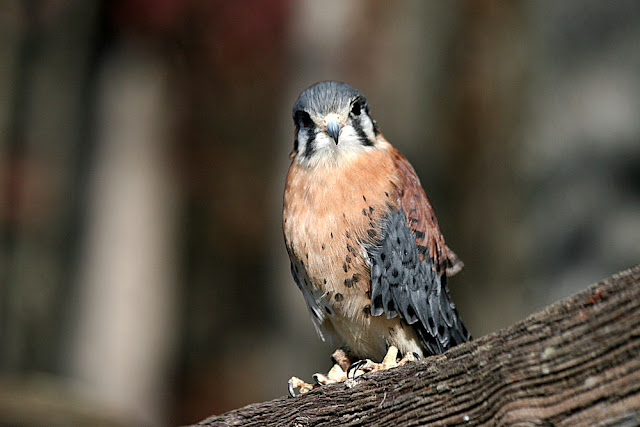 It is the smallest falcon in North America and is about 7 to 8 inches long (19-21 centimeters). It is about the size of a large thrush. The male weighs 3.6-4.2 oz. (103-120 grams) and the female 4.4-5.9 oz. (126-166 grams). Males have blue-grey wings with black spots and white undersides with black barring. The back is rufous with barring on the lower half. The belly and flanks are white with black spotting, and the tail is also rufous with a white or rufous tip and black subterminal band. 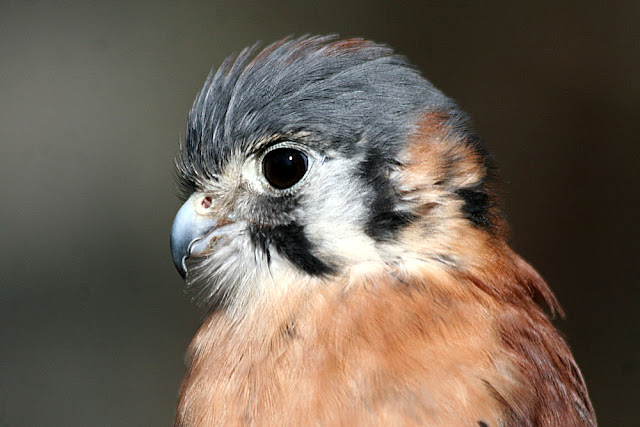 The back and wings of the female American Kestrel are rufous with dark brown barring, and the undersides are creamy to buff with heavy brown streaking. The tail is noticeably different from the male, being rufous in color, with numerous narrow, dark black bars. 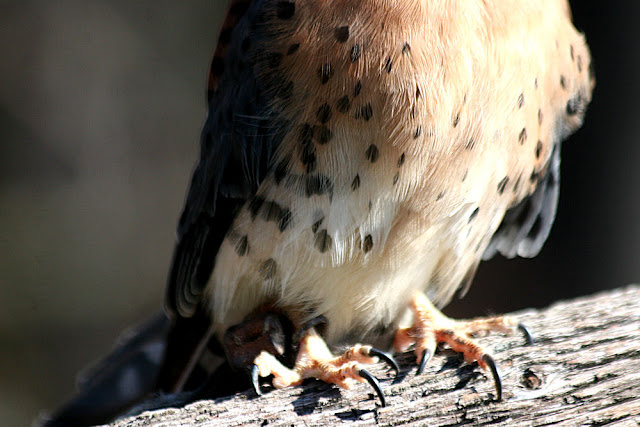 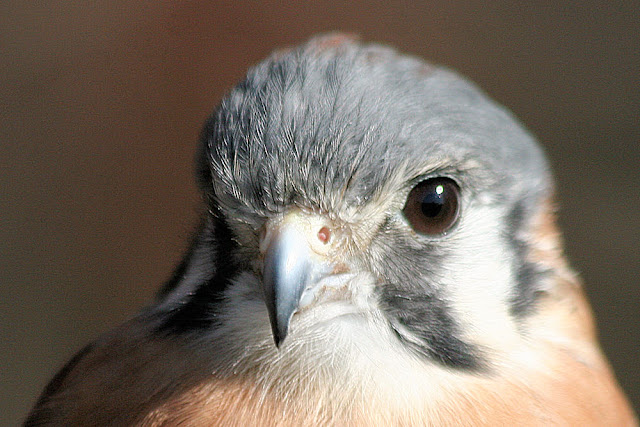 In both sexes the head is white with a bluish-grey top. There are also two narrow, vertical black facial markings on each side of the head, while other falcons have one. Two black spots (ocelli) can be found on each side of the white or orangish nape. The function of these spots is debated, but the most commonly accepted theory is that they act as 'false eyes', and help to protect the bird from potential attackers. The wings are moderately long, fairly narrow and taper to a point. While the kestrel is perched, the wingtips are noticeably shorter than the tail tip. 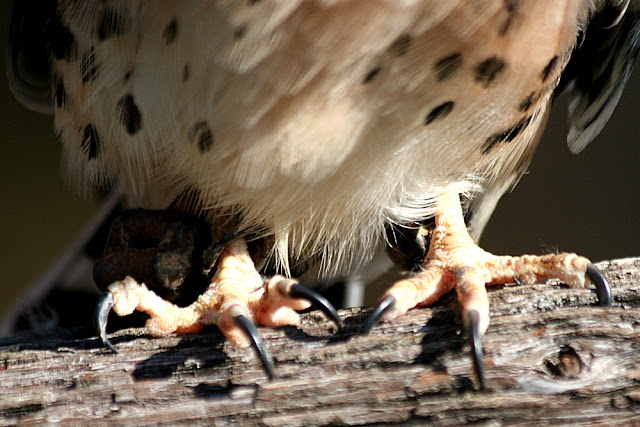 The American Kestrel hunts by hovering in the air with rapid wing beats or perching and scanning the ground for prey. Its diet typically consists of grasshoppers, lizards, mice and other small birds. 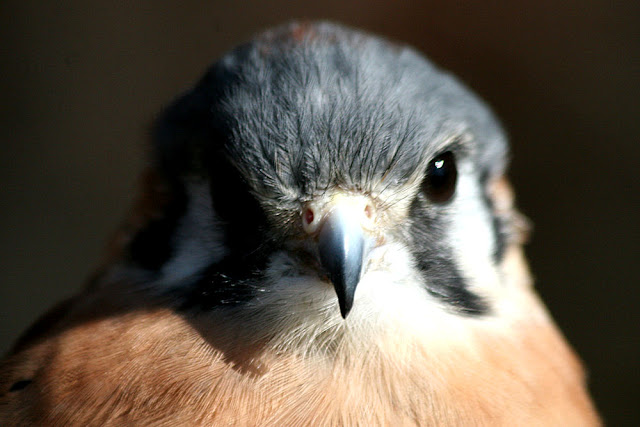 It nests in cavities in trees, cliffs, buildings and other structures. 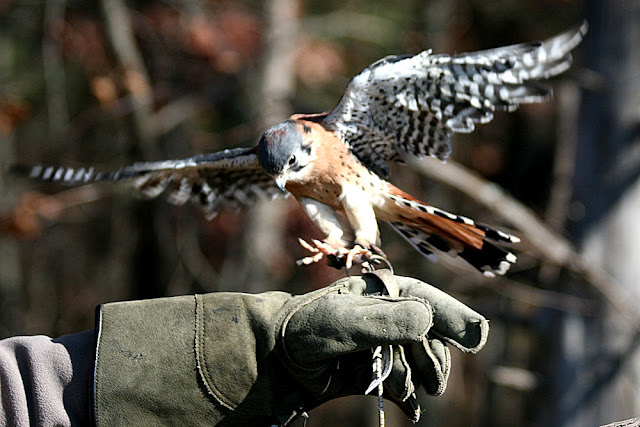 The female lays three to seven eggs which both sexes help to incubate. Its breeding range extends from central and western Alaska across northern Canada to Nova Scotia, and south throughout North America, into central Mexico and the Caribbean. 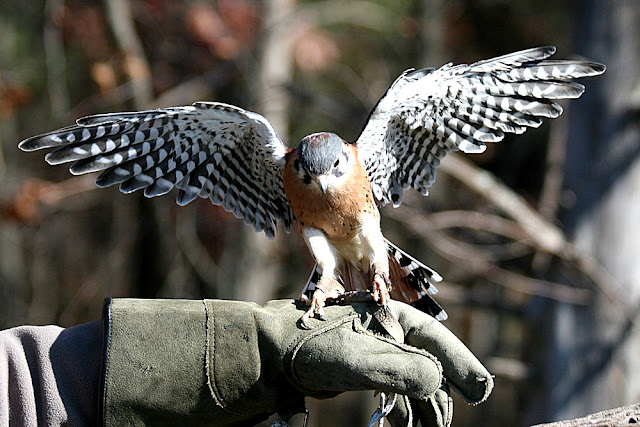 It is a local breeder in Central America and is widely distributed throughout South America. Most birds breeding in Canada and northern United States migrate south in the winter, and it is an occasional visitor to western Europe. 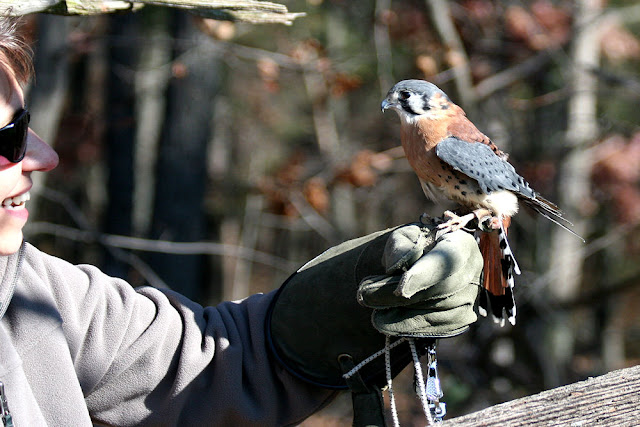 It was a great pleasure being with this lovely little bird for a short time.

Thanks for looking and I hope your week is a great one. 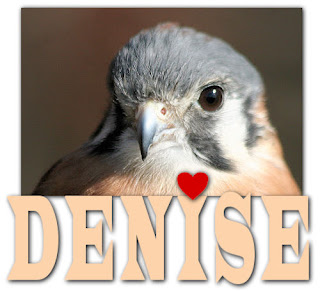