I am running behind in answering comments and visiting blogs right now.  I will be catching up soon.  Thanks so much for all the comments you have been leaving. 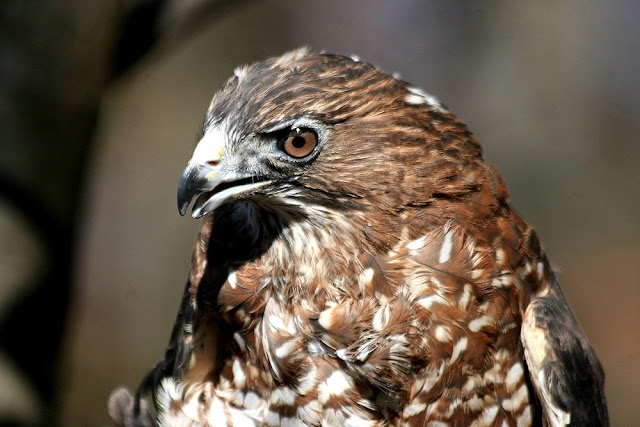 Another post from a demonstration put on by The Raptor Conservancy of Virginia.  Please note that this post was written several years ago, and information may have changed.  All the birds seen were injured and unable to be released to the wild.  They are looked after and shared in their educational program.

It is described as a small, stocky bird with a body size from 13 to 17 inches (34 to 44 centimetres) in length, and weighing anywhere from 9.3 to 20 ozs. (265 to 560 grams). As with most raptors, females are slightly larger than males. Broad-winged Hawks have relatively short and broad wings, pointed at the end, which have a tapered appearance unique to the species. It can grow a wingspan of 32 to 39 inches (81 to 100 centimetres). 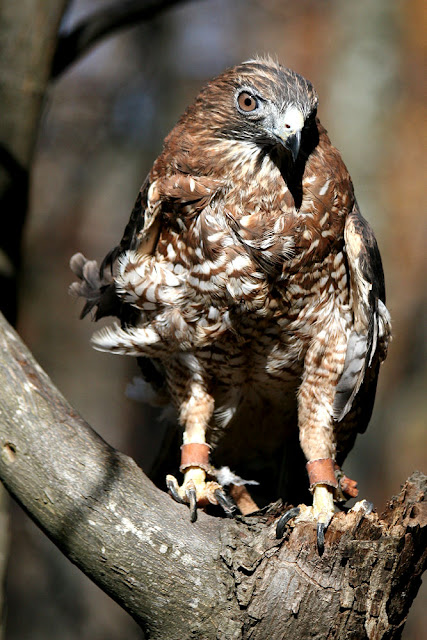 Adult bodies are a dark brown with a white belly and chest containing horizontal barring. While their tail can be a dark grey-black with white lines along the middle, base and tip. The young hawks have a slightly different coloring with more white and longitudinal barring instead of horizontal barring. 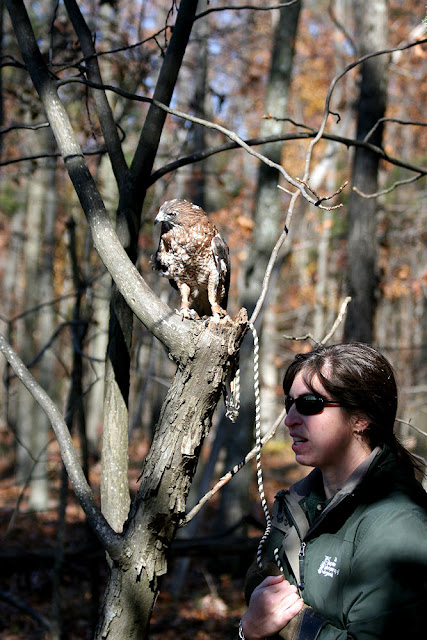 There are two types of coloration, a dark morph with fewer white areas and a light morph that is more pale overall. The light morph of this bird is most likely to be confused with the Red-shouldered Hawk, but they have a longer, more heavily barred tail and wings, with a solid rufous color in the adult which are usually distinctive. Rare dark morphs are a darker brown on both upperparts. Drk-morph Short-tailed Hawks are similar but are whitish under the tail, with a single subterminal band. 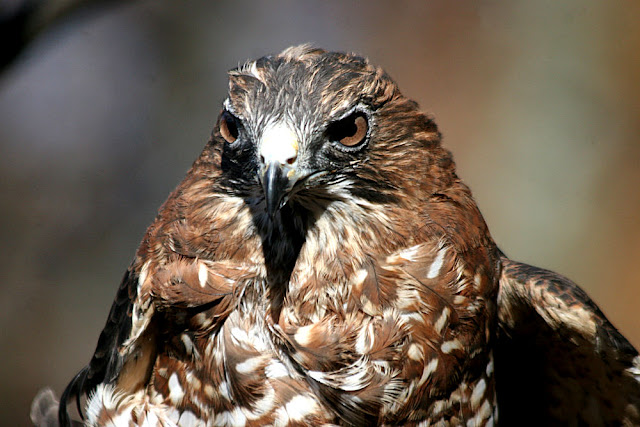 The Broad-winged Hawk (Buteo platypterus) is a small hawk of the genus Buteo. During the summer some subspecies are distributed over eastern North America, as far west as British Columbia and Texas. They then migrate south to winter in the neotropics from Mexico down to southern Brazil. Other subspecies are all-year residents on Caribbean islands. 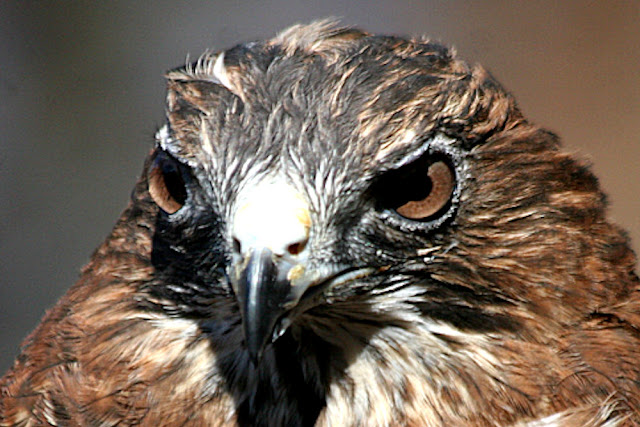 Although the Broad-winged Hawk's numbers are relatively stable, populations are declining in some parts of its breeding range because of forest fragmentation.  They will have only one mate during the breeding season, possibly because the male also helps a small amount with the upbringing of the chicks. They will breed anywhere between April and August starting when they are two years old. To attract and court females the males will do a flight display including cartwheels, dives and other aerial acrobatics. The birds meet in the air hooked together by their talons and spiral down together. They will also compete and fight with other males for the chance to mate with a female. If one of the males is successful, the mating pair will have only one brood per season consisting of one to four eggs. 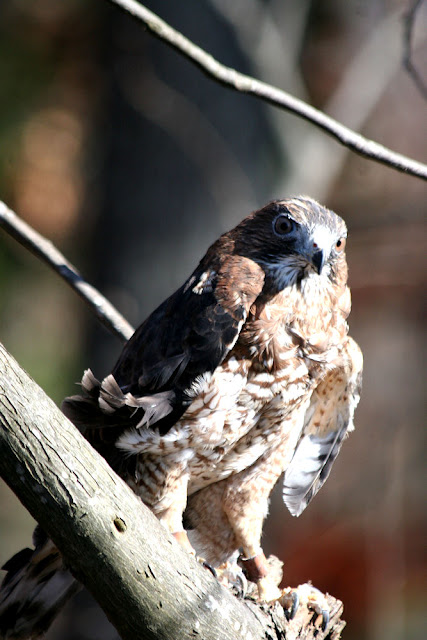 Both the male and female will build the nest out of sticks and twigs in a deciduous tree before the eggs are to be laid. Once they are though, the brown-spotted eggs are usually 1.9 x 1.5 inches (49 by 39 millimetres) and weigh about 1.5 oz. (42 grams). The female will then develop a brood patch and incubate the eggs for 28 days or longer before they hatch. The hatchlings will appear semi-altricial; incapable of any complex coordination but have open eyes and are covered with down feathers. (Altricial means 'requiring nourishment' and refers to a pattern of growth and development in organisms which are incapable of moving around on their own soon after hatching or being born. The word is derived from the Latin root alere meaning 'to nurse, to rear, or to nourish', and refers to the need for young to be fed and taken care of for a long duration.) 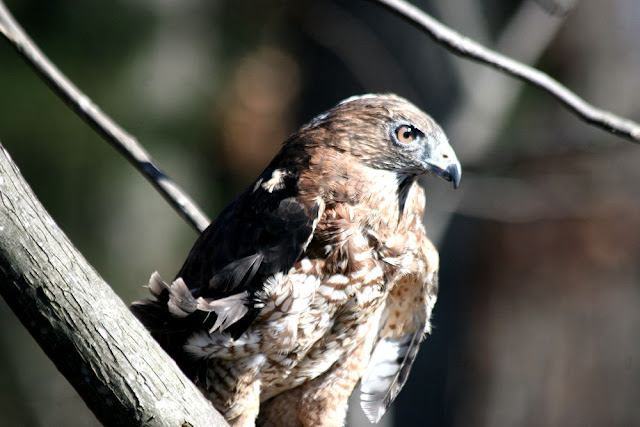 Chicks will have rapid body growth until they are almost at adult body size, at which time they are capable of walking, flying and eating without parental help. While in the nest the female gives most of the parental care, protecting and taking care of the chicks. It is not unusual to have the male provide some food for the female and offspring, but his visits are short lived. Once a prey item is obtained for the nest, the female will tear off pieces and will feed the chicks till they are able to rip meat off on their own. Often the chicks will fight for possession of the offered morsel, the younger ones usually losing and not getting enough. Broad-winged Hawks will protect their nests in a show of agression (i.e. diving and chasing) towards any suspected threat, but they generally will not make physical contact. Predators of eggs and nestlings includes raccoons, crows, porcupines and American Black Bears, and adults have been known to fall to Great Horned Owls and Bald Eagles. It will take the hatchlings five to six weeks before they are able to leave the nest. Some young even after that time will remain in the area of the nest for several weeks more

I hope you have enjoyed another post from when I attended this very interesting demonstration, several years ago now.

Posted by DeniseinVA at 3:14 PM