From an original post in November 2011 (old blog that is no longer available).   Certain info may have changed since then.

This is the only other bird I took photos of from my photographic session with the Raptor Conservancy of Virginia.  I have not mentioned it before but it was being held at the George Mason University Campus in Manassas, on the grounds of the Hylton Theater for the Arts. 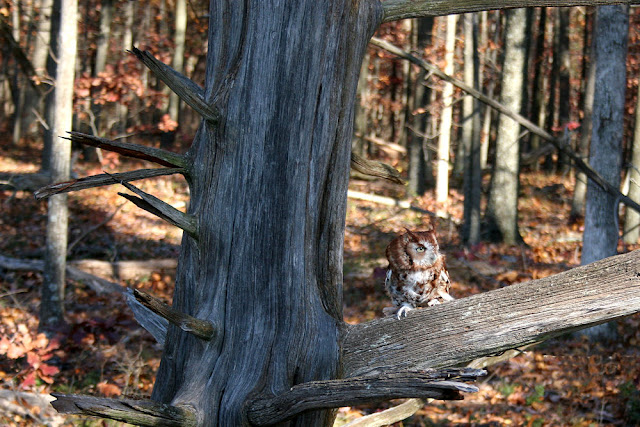 My session started at 10.00 a.m. I had driven two miles - thank goodness it wasn't any longer - when I looked on the passenger seat where I had placed my purse and my camera, and realized I had forgotten the tickets. So I turned around and drove back home. I thought I had been so organized as I had gotten everything else ready, right down to my choice of clothing, the night before, and I had left the tickets on the kitchen table ready to pick up that morning. Mental note: put any future tickets in my purse or actually on the seat of the car before I go to bed.  (Not a morning person!) 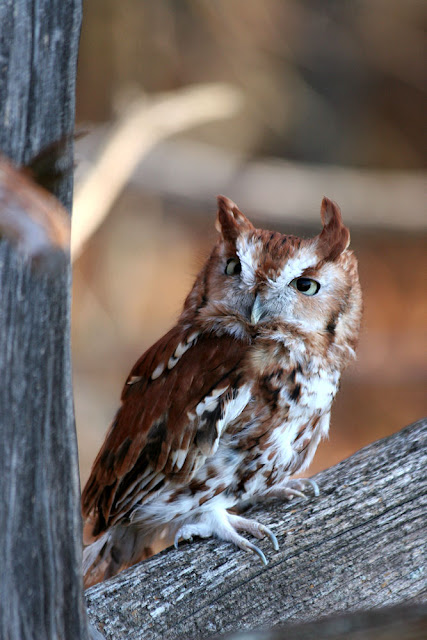 Even though I had given myself lots of time, my unexpected turnaround put me behind schedule, and when I got there I found that I still had to go inside the theater to show that I had turned up.  I just thought it was a matter of following the signs to the bird demo.  This was not made very clear on the online program, but the friendly chap at the door said, "You have to join everybody over there." "But I already have my tickets" I answered hopefully. He smiled patiently and said "That's great but have you paid your main entrance fee?" I did not know there was a main entrance fee. To add to the joy of beginning the day he also said, "I hope you're not in the line for A to H."  When I looked at my line, yes that was where I had to go. It was about three times as long as the others and there was a lot of grumbling around me as I joined the queue, and the hall was jampacked with  people jostling shoulder to shoulder.  There were other events also. People who had already been waiting a while were not happy. I was wishing my name had started with V, W, X, Y or Z. There was no one waiting there.

My line wasn't going anywhere very fast, and I found out why I was in the longest one. When it was finally my turn they did not have any record of my name.  Not to worry, I was told, a lot of people have had the same problem. Apparently it was not our lucky day if your name started from A to H.  When I finally reached the table I was told that all was well but then was sent to the RCV table 'over there' to pick up my name badge, so that those outside could see that I had paid for my ticket.  I was not given a table plan at the door as they had run out.

'Over there' meant weaving through a couple of dozen or so tables to find the one I needed, and none of the other vendors knew where their table was, and people like me looked like they were doing the same thing.  It was a bit chaotic to say the least and I felt the crush of the very large crowded hall.  There was no easy way of going back to the entrance to ask. Access was blocked by too many people, several complaining about the same thing I had encountered.  I felt sorry for the people working there.  I normally have loads of patience but found myself getting a little out of sorts, a bit stressed thinking about missing precious time with those lovely birds.

I finally found the table I was looking for on the second level, and by this time I was running late by about 20 minutes. I had a chat with the young lady who said you must be Denise.   I was taken aback for a few seconds and at my look of surprise she explained that I was the only person who hadn't signed on the dotted line yet.  Oh joy, last one to the party!  I said the other attendees names must all have started with V, W, X, Y or Z.  She didn't get it by her puzzled look, and I wasn't hanging around to explain, so I smiled my thanks as I asked her where I had to go.  She gave me good directions from there.

Ten minutes later I was with my group......30 minutes late.....not so bad really......BUT online somewhere I had read that we would be about six feet from the birds and would not need a zoom lens. Thinking about carrying the extra weight I left it in the boot of the car and so I attached my regular lens. Looking at all the others with their long lenses, I  realized that I needed that zoom and I was mentally kicking myself for not being more prepared on so many levels. This was not a good start, nothing seemed to be running smoothly.  I heard a few people complaining to the ladies giving the demonstration, and I wasn't going to join in.  If I did anything like this again, I would get there two hours ahead of time instead of that one hour I had given myself.  Knowing that I would regret it if I didn't, as fast as I could I half-ran, did not walk, back to the car, quickly attached the zoom and half-ran, did not walk, back to my little owl, all done without falling flat on my face. I don't have the greatest reputation for staying on my feet when I rush through life, so I have been trying to slow down and smell the roses, and I certainly could not do this now if I tried.  But... 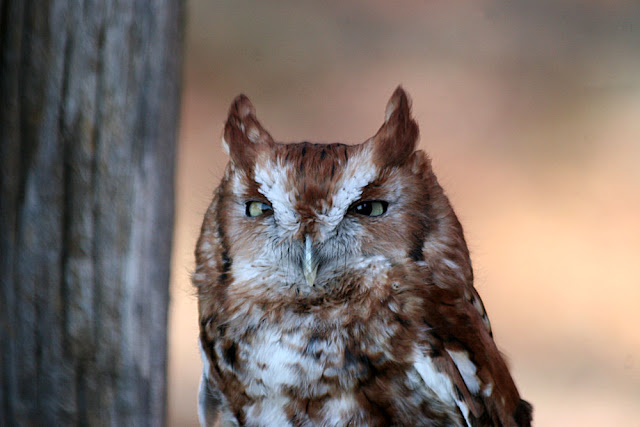 all of a sudden there he was. This little guy made it all worthwhile. I soon forgot about what had gone on before and returned to my Zen state.  There is nothing like wildlife and nature to calm one's soul.  Meeting "Fire", who didn't seem to mind me being so tardy, put my day back in kilter. It wasn't long before I was smelling the roses and smiling from ear to ear.  Most of the birds I met that day had sustained some kind of injury and sadly none of them would be able to return to the wild.  Fire, if I identified him correctly from the Raptor Conservancy website, came to them in late 2003 after he had been hit by a car. It was determined that he could not be released again because of severe loss of vision in both eyes, poor wee little thing. 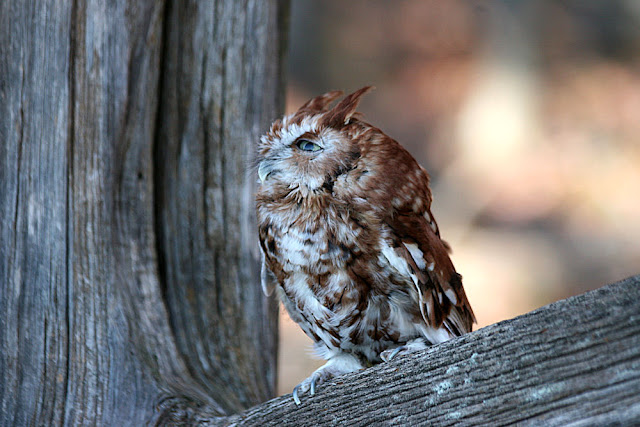 Doing a little research I found that the Eastern Screech Owl (Megascops asio) is the most common owl in the woodlands of eastern North America and is nocturnal. It often nests in tree cavities and nest boxes in close proximity to people. They grow to an average length of about nine inches, though the male of the species is roughly an inch shorter. The female has an average wingspan of 22 inches versus the male at 21 inches. The normal weight of the female is 7.3 ounces with the male near 7 ounces. 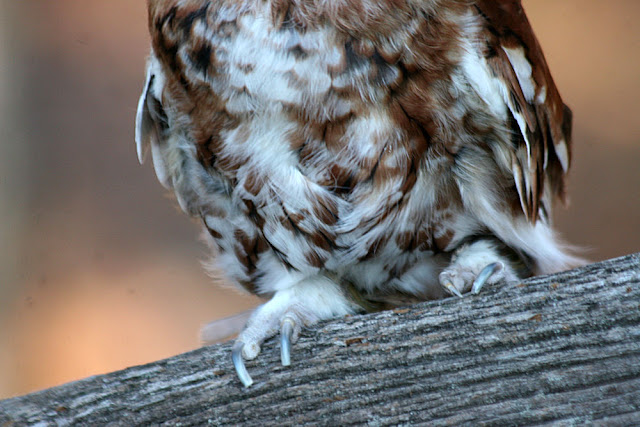 Breeding season will normally begin around mid April but can start as early as mid March, and continue into May depending on the geographical location and temperatures.  They nest almost exclusively in enlarged natural tree cavities, but they will also use old Pileated Woodpecker and Northern Flicker cavities.  They readily use owl and wood duck boxes. 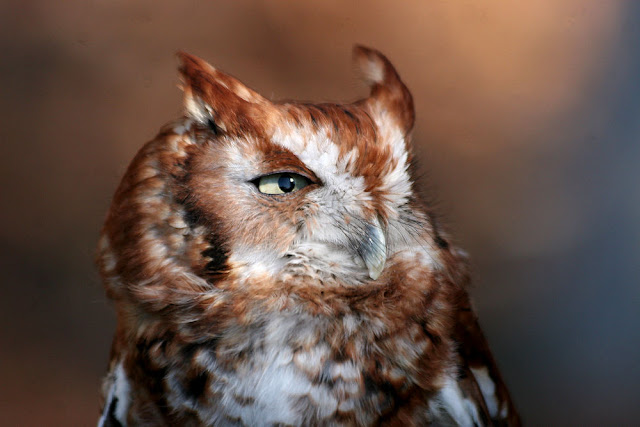 The female will lay between two and eight eggs.  The period of incubation is normally 26 days following with the young fledgling at 31 days.  The adult owl will remain in their home territory year-round, whereas the young will disperse in the Fall.  An interesting fact about the Screech Owl is that pairs are almost certainly monogamous and remain together for life.  Some males, however, will mate with two different females.  The second female may evict the first female, lay her eggs in the nest and incubate both clutches. 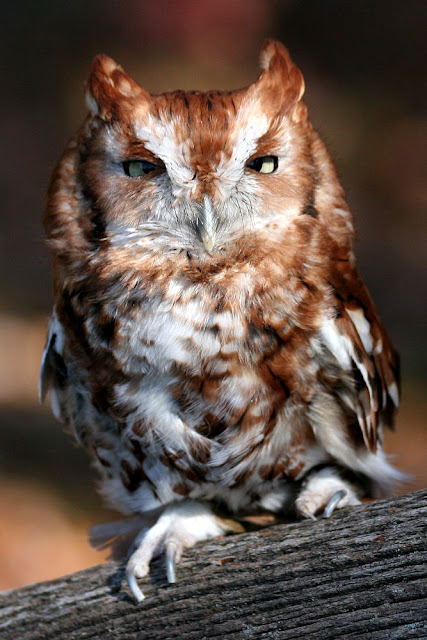 I hope you have enjoyed meeting Fire.  I certainly did, as well as his friends who followed him.  I had bought two tickets, one for the owls at 10.00 a.m. and another for the hawks at 11.00 a.m., which I have already shared.  Apparently I have been working back to front.  I followed no particular order when sharing these posts.

I returned home via my favorite coffee shop.  The shot of caffeine did not alter my tranquil state and for the rest of the day I went through the dozens and dozens of photographs I had taken, organizing and resizing all of them.  I am thankful, after a few hiccups at the start of the day, it ended up on a wonderfully even keel.

This is my last of the series and I hope you have enjoyed them.  If you have missed any you will see all by clicking on The Raptor Conservancy of Virginia among the labels under this post.

I am having a bit of a break until Monday to see if I can catch up on reading comments and visiting blogs.

Thanks for following along.  I wish you a happy day, as well as a great weekend. 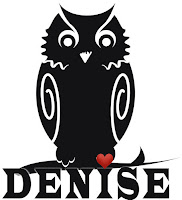 Posted by DeniseinVA at 4:30 PM