This is a follow-on from the post I shared about the alligators, and are also from my archives.  We saw a lot of these interesting birds.  It is the Anhinga and they are extraordinary!  I particularly love the first photo where it is looking up towards the sky.  We were walking along the Anhinga Trail at the Everglades, on a road trip in January of 2014. 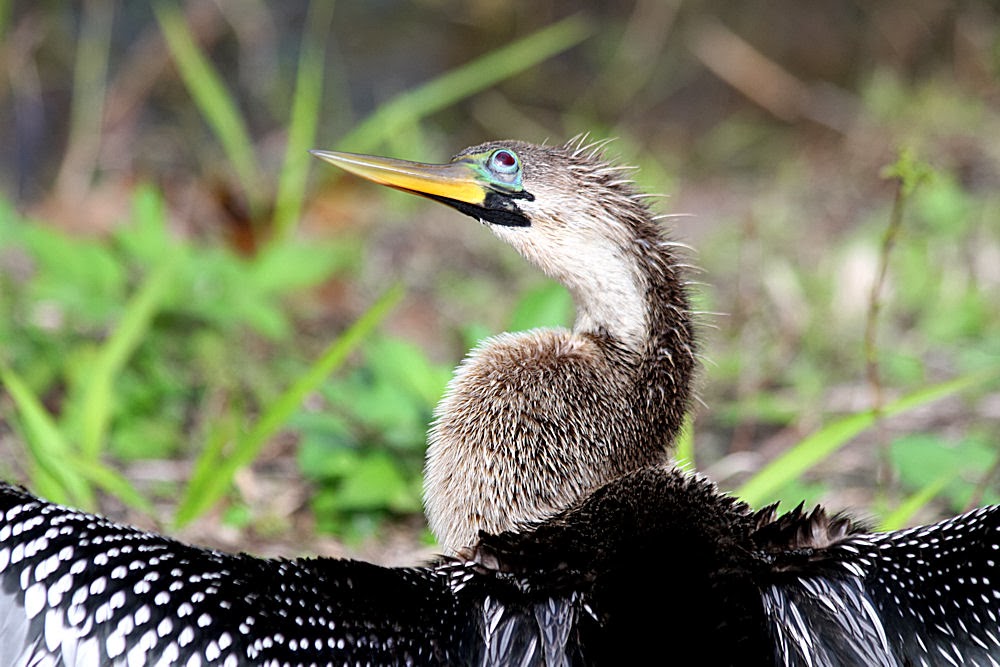 To learn more about this bird click here.  Scroll down on that page and you will find an audio button sharing its call. 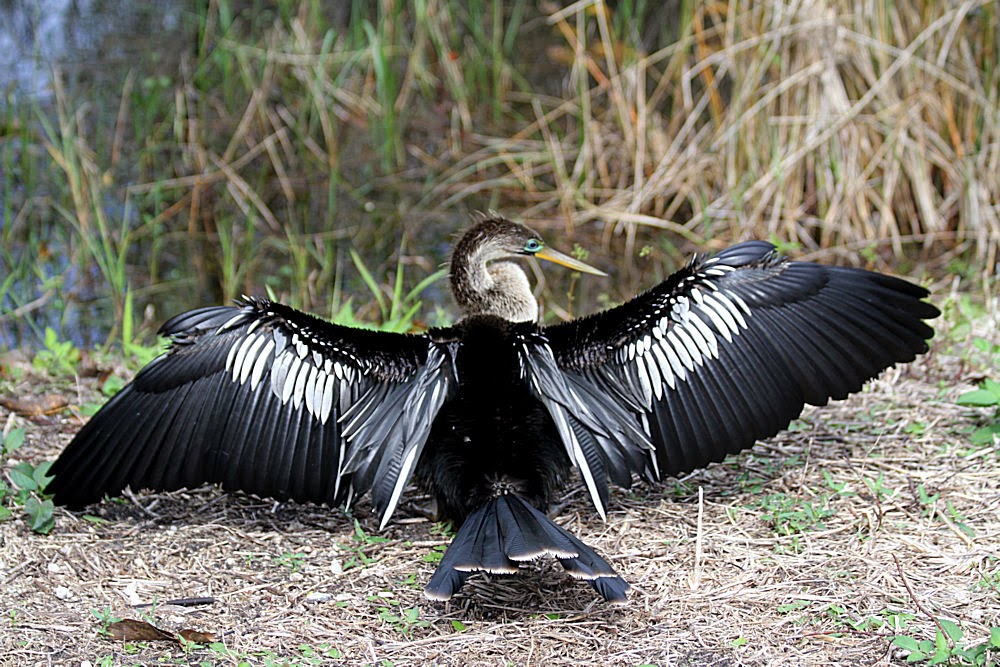 Anhingas can stay underwater for substantial periods of time. It spreads its wings to absorb the warm sunshine. They are often seen perched with their wings spread, displaying their amazing plumage.  Whether wet or dry and especially in bright sunshine and cool temperatures, anhingas spread their wings, characteristically orienting themselves with their backs to the sun. They have unusually low metabolic rates and unusually high rates of body-heat loss. The spread-wing posture allows them to absorb solar energy to supplement their low metabolic heat production and to offset their high rate of heat loss. Anhingas lack the insulating layer of feathers sported by double-crested cormorants (Phalacrocorax auritus), which are sometimes confused with anhingas because of their similar appearance. Coupled with their low metabolism, the anhinga's lack of insulating feathers limits the northernmost extent of their range to the southeastern United States. While anhingas range widely to the south to take advantage of the warmer temperatures offered by South America, double-crested cormorants range to the colder climates of the north, all the way to Alaska. 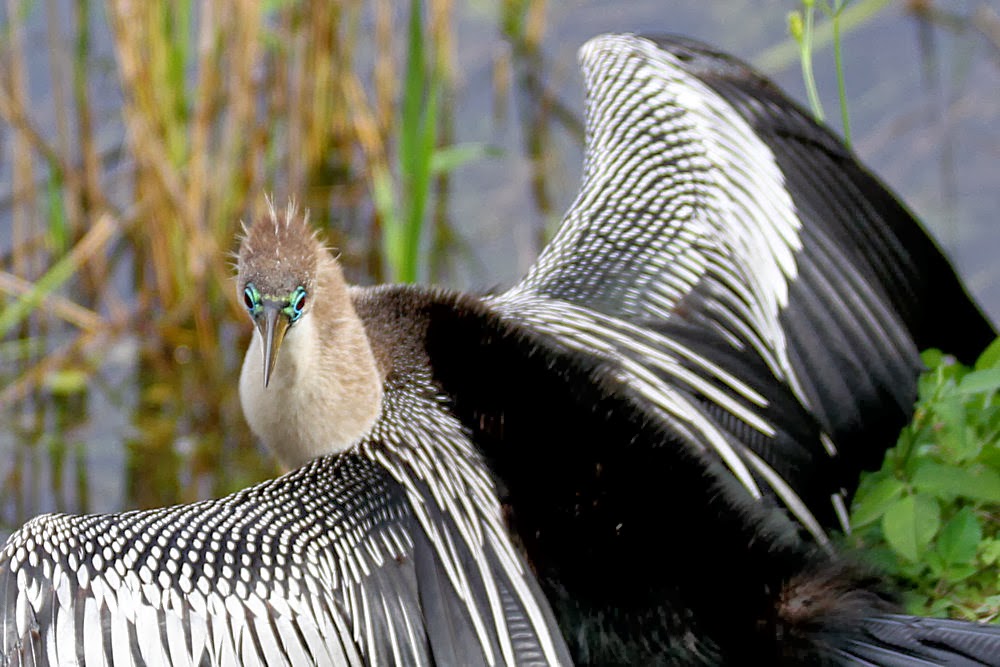 Adult anhingas are large, dark waterbirds with a long, thin neck, a long, thin, pointed bill, a long tail, and silver patches on the wings. Males have greenish-black plumage overall, accentuated by silver-gray feathers on the upper back and wings that are edged with long white plumes. Females are brown with a lighter brown head and neck. Immature anhingas are more similar in coloring to adult females than to males. 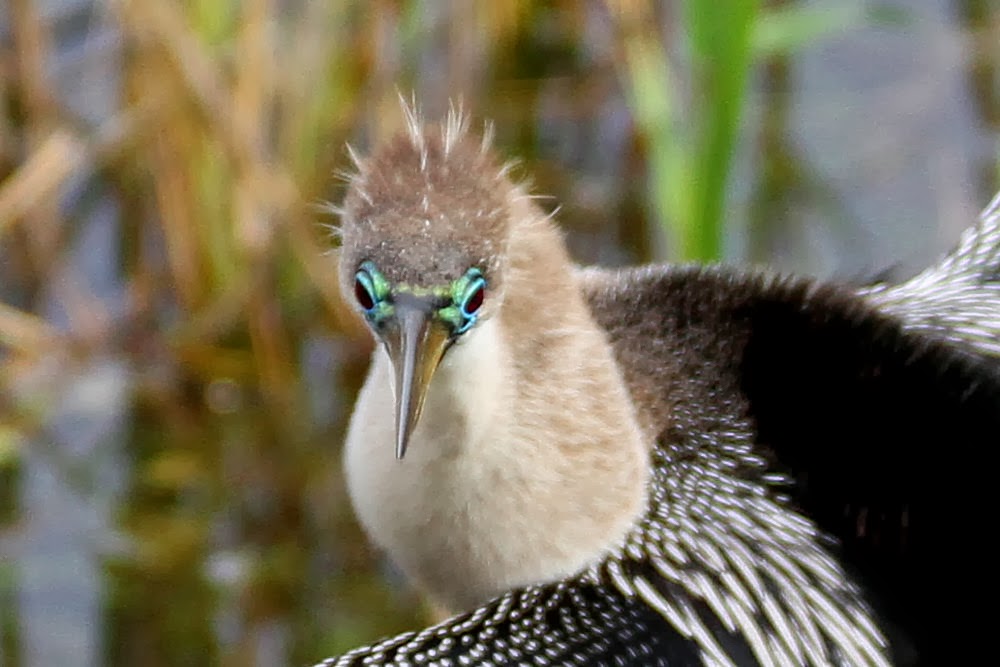 The anhinga is also known as the snakebird because it swims with its body submerged while stretching its head and neck out above the surface of the water, giving it the appearance of a snake about to strike while it glides through the water. They are also graceful fliers and can travel long distances without flapping their wings. 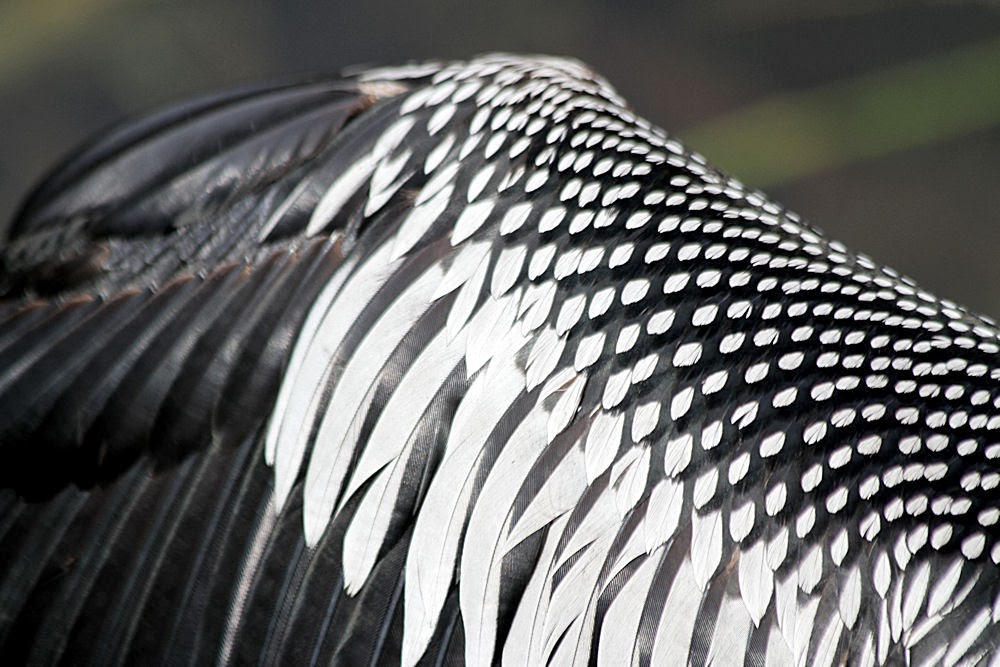 Female anhingas typically lay from two to six pale bluish-green eggs. The parents share incubation of the eggs for 25 to 30 days. Upon hatching, anhinga chicks are naked and helpless. They eventually grow a white down on their belly and a dark down on their back. The chicks reside in the nest for about 3 weeks but if threatened, they are able to drop into the water and swim away, later climbing out of the water and back into the nest. At about 3 weeks of age they are able to climb out of the nest and onto a branch, and they fledge at about 6 weeks of age. They stay with their parents for several more weeks before becoming independent. 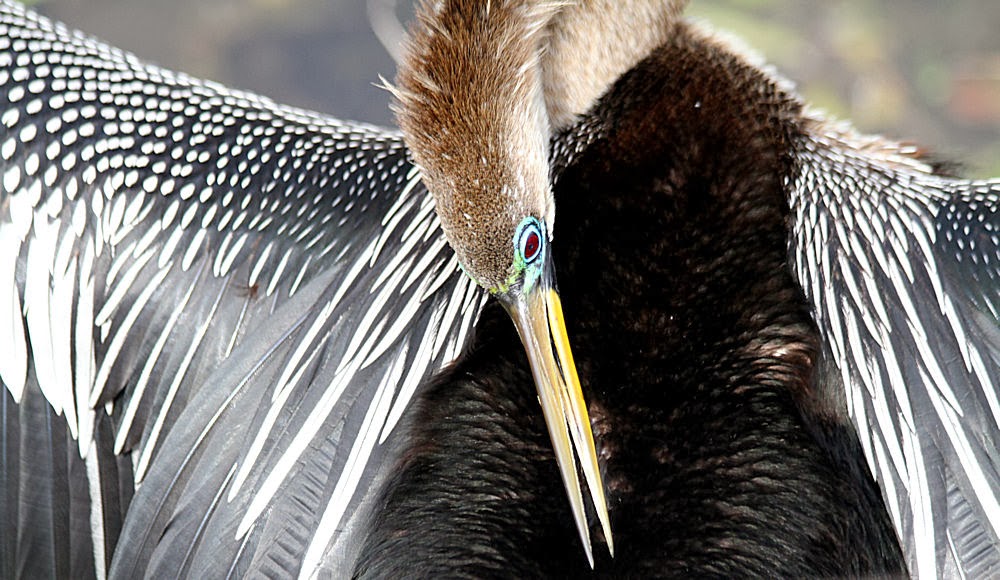 The sign reads:
"This trail skirts the edge of a freshwater slough, where wildlife is likely to appear at close range.  The encounters are not exactly random; during dry season the slough operates like one of the many gator holes throughout the shallow river of grass.  In these deeper pools, fish become concentrated, attracting alligators, wading birds, and a throng of other creatures.  The drama is not just the largest egret or alligator but the combination of creatures and conditions - the water level, the killifish, the pond apple trees.
Anhingas may be found along this trail in abundance, often with their back to the warm sun and their wings out to dry.  Anhingas need this water because they feed by diving."
I certainly hope I can get back to Florida one day.  It has the most amazing wildlife.
Thanks for dropping by and I hope you have a great day. 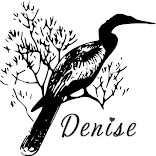