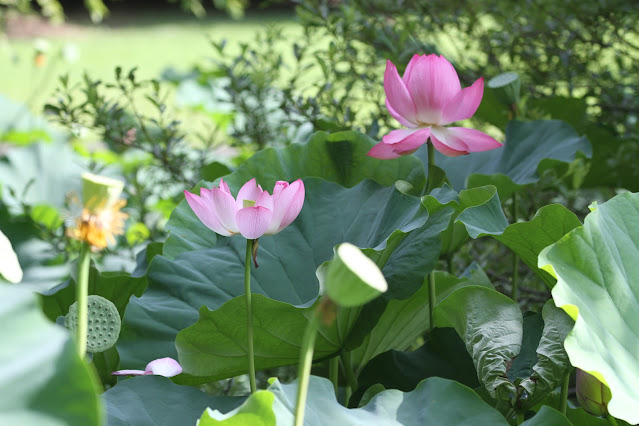 I found it hard to leave those lotus flowers and the refreshing fountain in the middle of the pond.  Though we couldn't feel its cooling spray, it was enough to sense it. 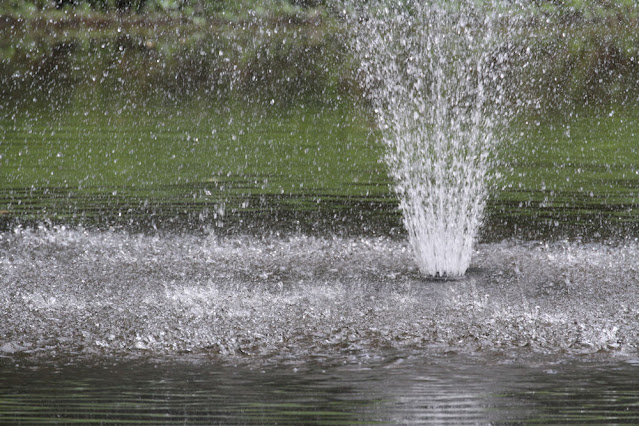 We sat on a nearby bench to see if any water birds would appear.  We haven't seen any Great Blue Herons at the pond since last year.  Maybe next time! 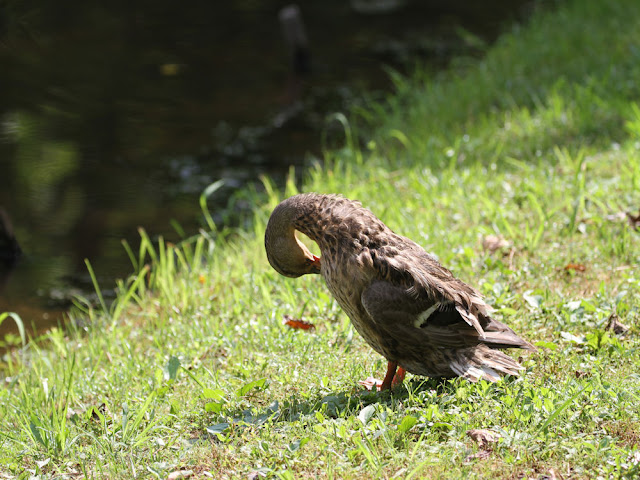 I felt lucky to see the female mallard, which I also shared in a previous post.   She was preening herself and then seemed to have a little snooze. 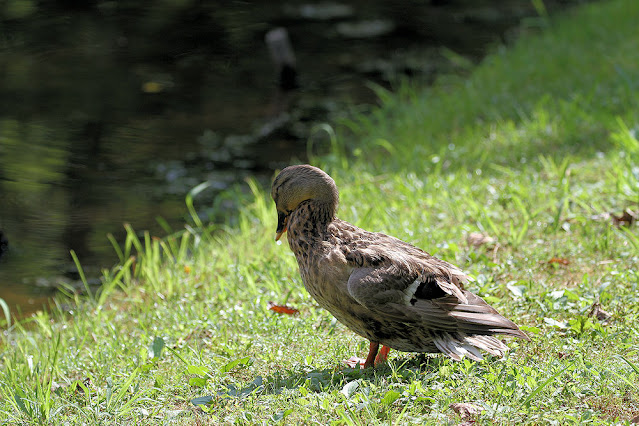 I empathized in that heat, most definitely, but at least she could take a swim later to cool off. I always enjoy reading about them and adding to what I have already learned.  Some facts I know, others I don't, some are a good refresher course. Today I read that ducks can live from 2 to 20 years, depending on the species and whether they are wild ducks or ducks in captivity. It is a fact that a wild duck can live 20 years or more. Domestic ducks typically live 10 to 15 years in captivity. The world record is a Mallard Drake that lived to a ripe old age of 27 years. 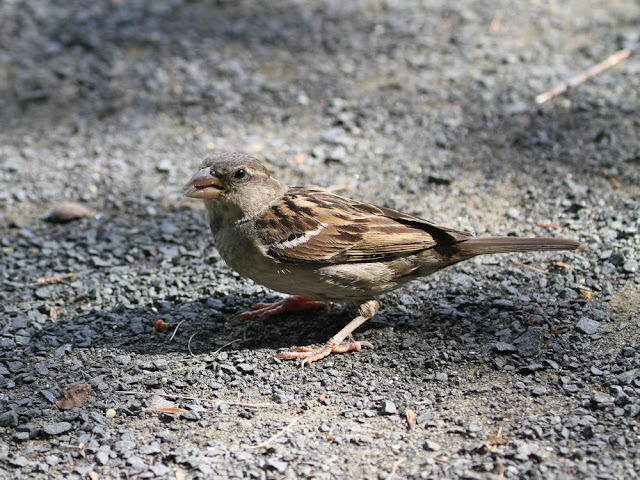 Someone had scattered a mixture of corn and other seed near the bench, and this little girl had her lunch not far from where we were sitting. The corn was too big but she seemed to be enjoying the tinier seed.  I believe she is a female House Sparrow but please correct me if you think I am incorrect. 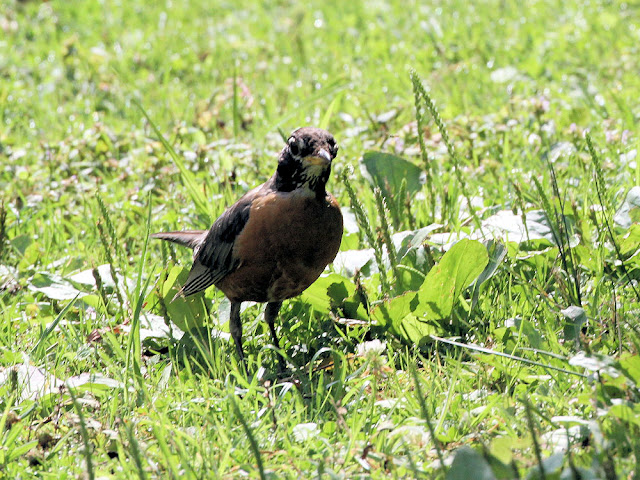 There was also an American Robin nearby, but that was it for the smaller birds.  The others were very elusive on our visit.  However, always grateful for small mercies, as the old saying goes.  True! 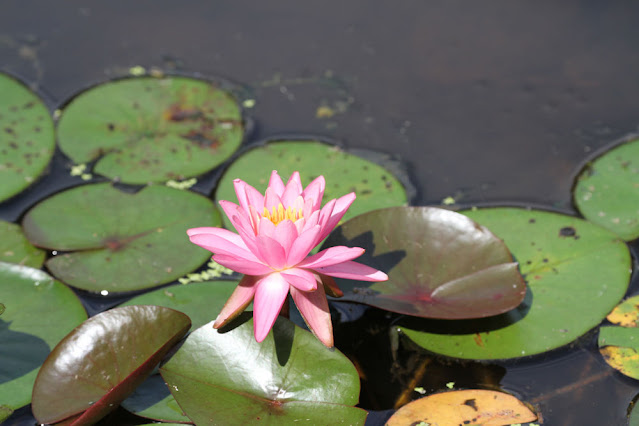 At the other end of the pond were water lilies.  There were also dragonflies.  They were flitting around and I couldn't get a proper focus for a photo. 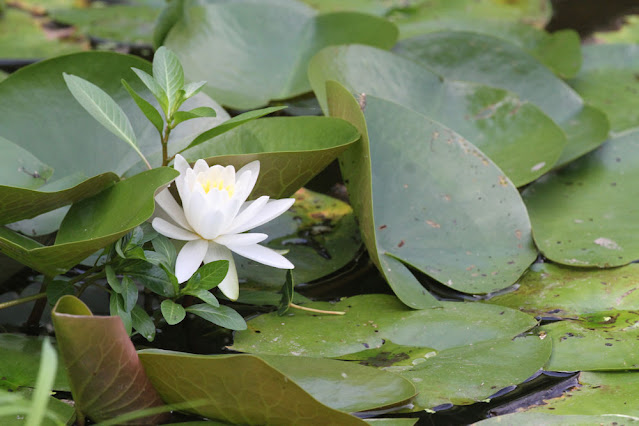 It was time to move on and we walked towards the path that would lead us up the hill, to the flatter part of the garden.  We said goodbye to the pond area, at least until next time. 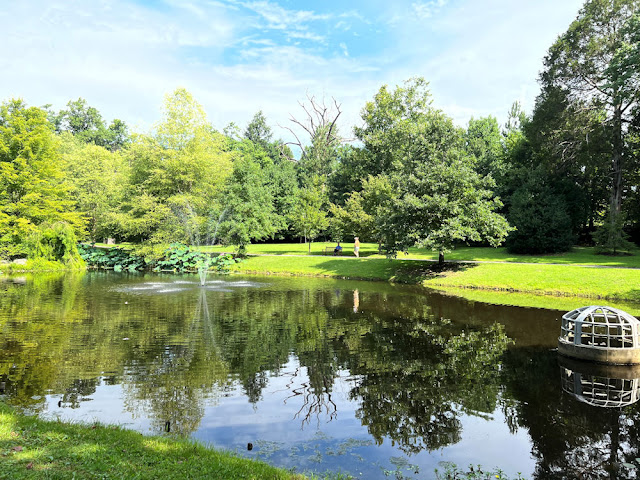 At the beginning of the path was a sign asking not to feed the ducks and geese... 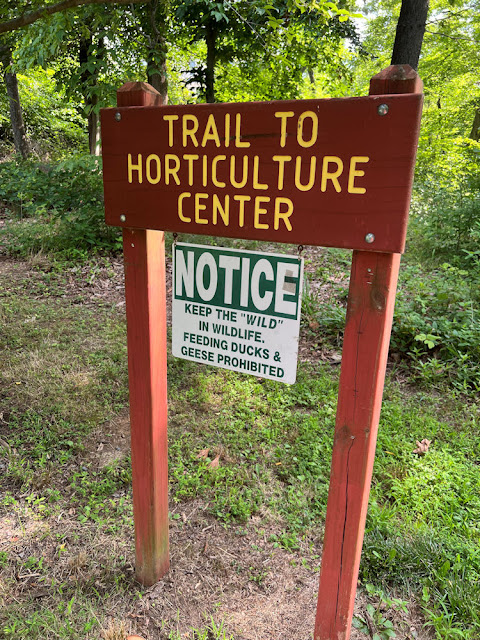 and another making us aware of their ecological restoration.  There is an article at this link which tells us all about it. 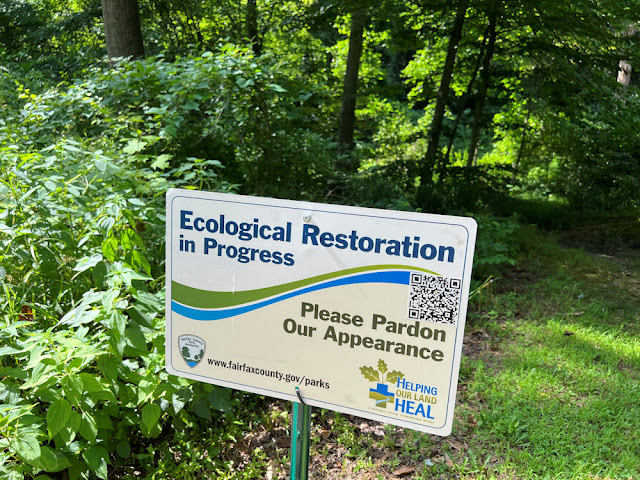 Not too far from this sign we spotted the family of deer.  We counted three at least.  They were quite a distance off from us and this is one of several photos I took but these didn't exactly work out.  The tree on the right is one we pass all the time where many couples have had their names carved into its bark over many years.  You can just about make out a deer's shape in the center of the photo.  Also, the little blue glints are the reflection of its eyes.  I don't remember the flash going off.  Perhaps it was a trick of the sunlight filtering between the trees.  I shared a better photo here on my first post from our recent walk, and it is the 6th one down. 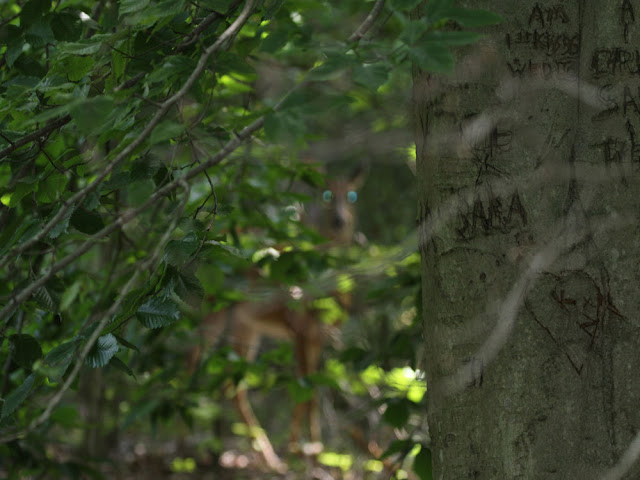 I also enjoyed the wildflowers as I walked.  Below is Blue mistflower, botanical name Conoclinium coelestinum.  Its other names are Mistflower, Wild ageratum, Blue boneset and Hardy ageratum.  It is an herbaceous perennial, is native to North America and blooms in summer and the fall. 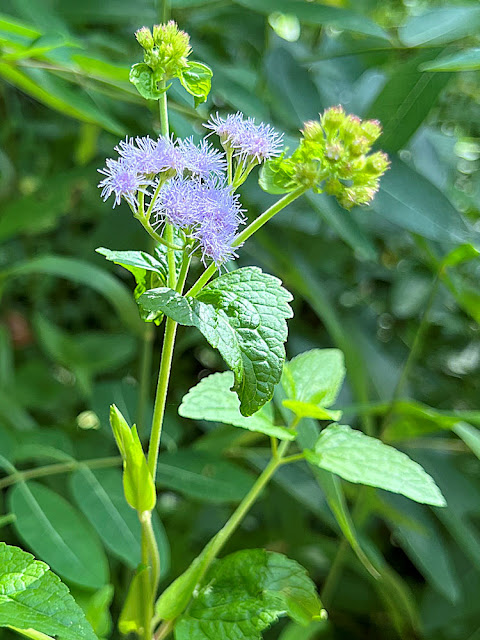 Next are the berries of the American elder.  Its botanical name is Sambucus canadensis.  Other names it goes by are Common elderberry, American elderberry, Elderberry, Canada elderberry and American black elderberry.  It is native to North American, a deciduous shrub and provides food for over 100 species of birds, as well as shelter for nesting.  The dark purple elderberries are used to make jellies, pies, juice, and wine.  The flowers are star-shaped and are a yellowish-white. 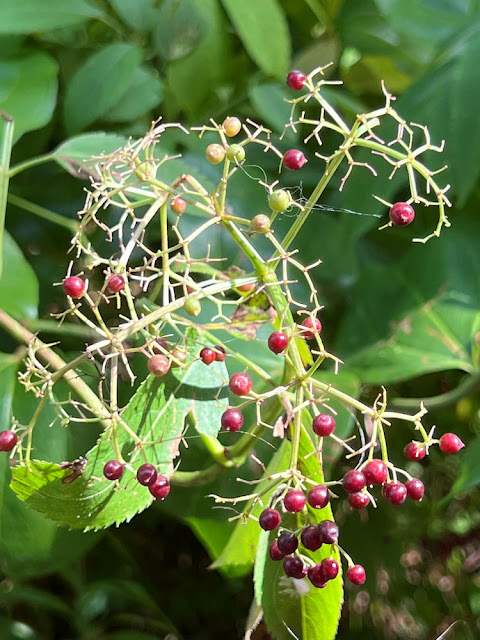 We spotted a beautiful black swallowtail on the pink Garden phlox, botanical name Phlox paniculata.  Also known as Summer phlox, Fall phlox, Perennial phlox and Cross-leaved phlox.  Phlox is a Latin word for 'flame'.  It is also native to the United States.  You can read more about the butterfly at this link.  There are great photos! 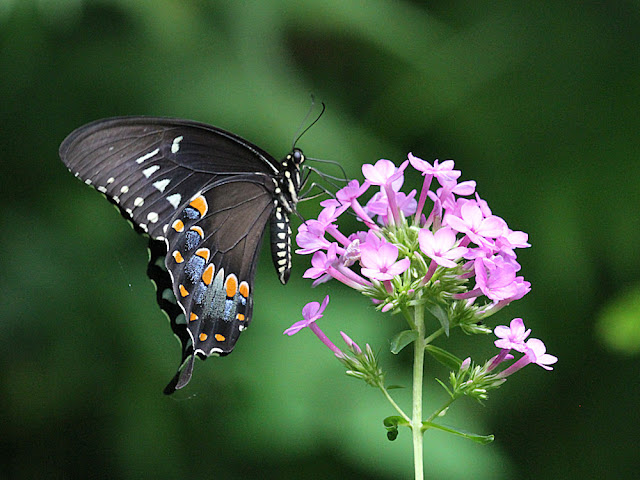 Purple Joe-Pye weed is next, botanical name Eutrochium purpureum.  I feel like I am auditioning for a Harry Potter movie with all these botanical names, but I enjoy learning them.  Other names are Kidney-root, Sweetscented Joe Pye Weed, Sweet Joe-Pye-Weed, Gravel Root, Trumpet Weed and Feverweed.  It is native to eastern and central North America, and blooms in the summer and fall.  Its flowers have a strong vanilla fragrance, which makes it a favorite of butterflies.  No flutterby friends on them as I passed by. 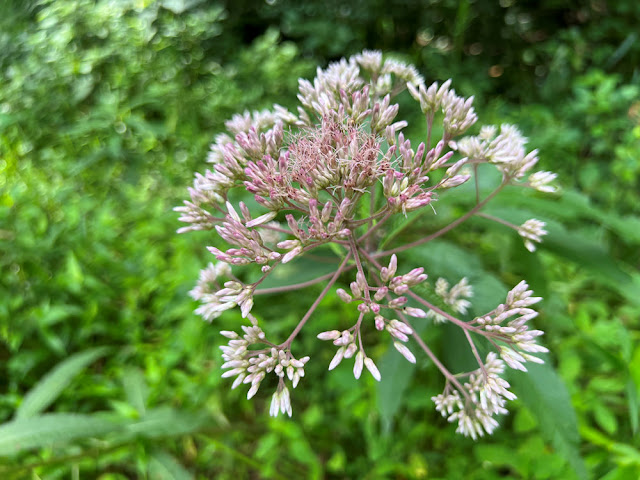 We have crossed the stream and are making our way up the hill and will end up in the top part of the garden. 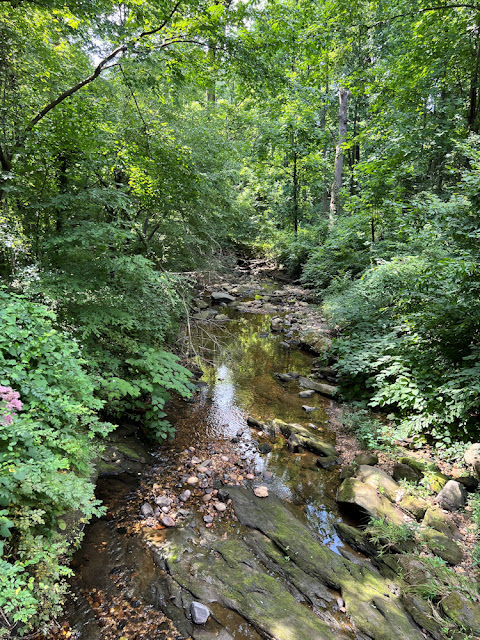 These beautiful yellow flowers are called the Cup plant, botanical name Silphium perfoliatum.  Other names are the Common Cup plant, Squareweed, Carpenter's weed, Pilot weed and Rosinweed.  It is a native to the Eastern and Central United States.  The height of this plant typically reached from 3 to 8 feet and as you can see, their blooms are similar to sunflowers.  They grew in abundance on each side of the path and these towered over my head. 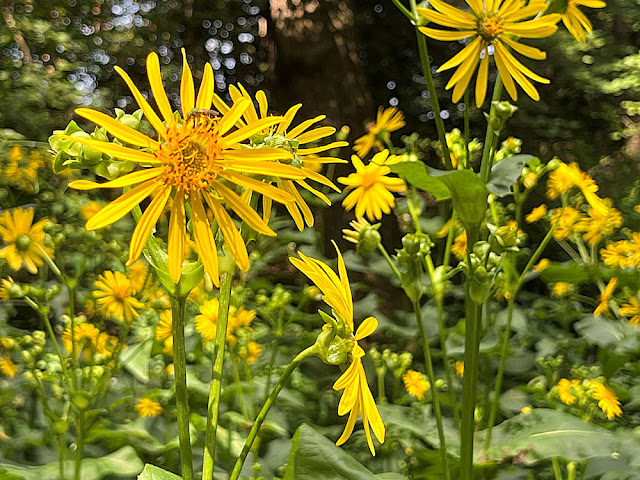 And frankly I loved them as you can see by the many photos.  There were hundreds of them along the pathway. 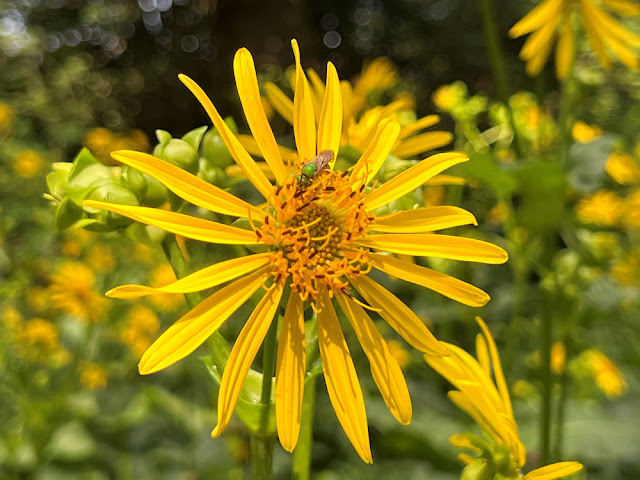 A closer view of one shows a bright green bug with wings.  I wish I could crop it closer without blurring it out too much (I only had my cell phone - Gregg and I swap cameras and he was further along than I was. He carries our larger camera with the zoom lens.  It is a lot heavier and my wrists start to ache if I carry it for too long.  He jokes that he is my porter, and will give it to me when I want to see something up close.  I am glad he likes taking photos as much as I do, and many of his photos I share on my blog.) 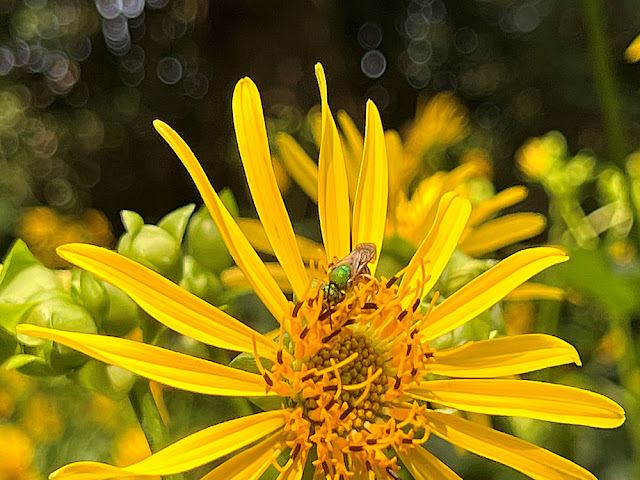 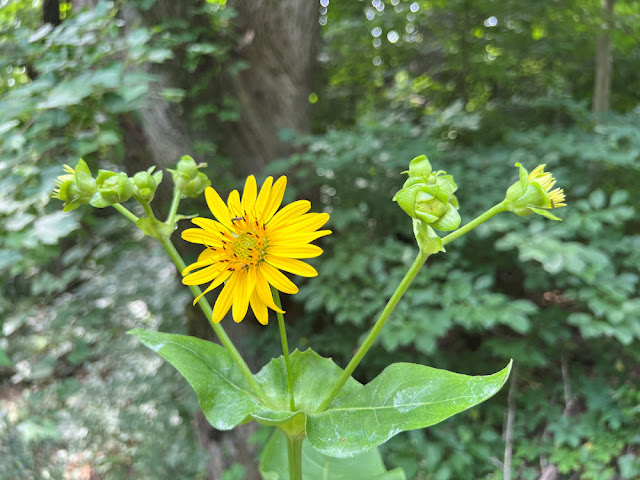 Each flower head has 20-30 yellow rays and darker yellow disks. The leaves are joined at the stem to form a small cup that holds water and attracts birds. 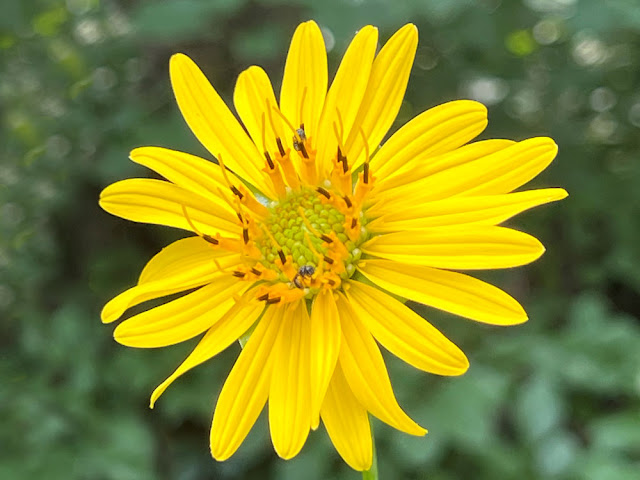 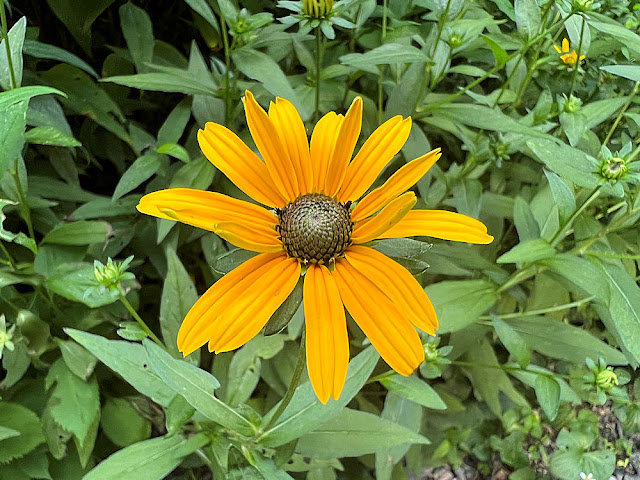 People plant them to attract butterflies to gardens.  It is also a native flower to America. The stamen isn't actually black but brown.  Its yellow petals attract some birds, but the brown center isn't that attractive to our feathered friends.  However, its center acts as a good platform where they can stand and snack on the jagged ambush bugs and aphids that frequent it.  Just like echinacea, the flower has been used in traditional herbal medicine.  Growing throughout the prairies and plains, it was used medicinally by many Native Americans to care for both people and horses. 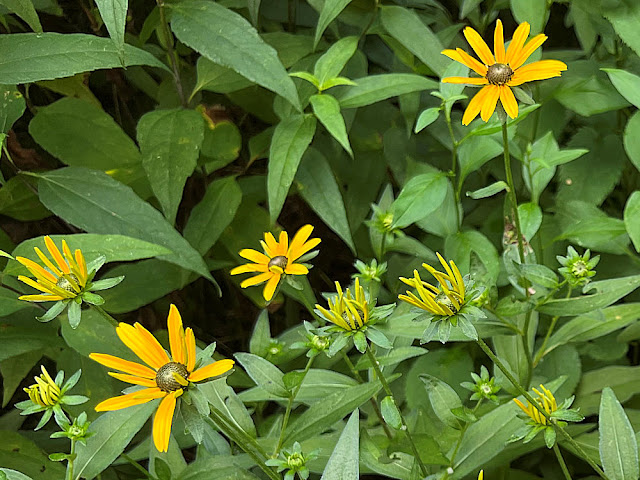 It was declared the state flower of Maryland in 1918. 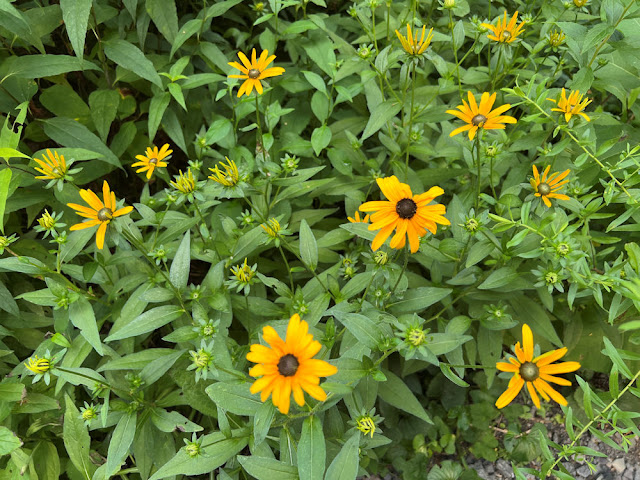 I have a few more photos from the top part of the garden. I will share those when I can put a post together.
Thanks for looking and have a wonderful day!