our son and a bit of a hodge-podge from our week.  Son came over a couple of days ago for a few hours.  I was sitting at the other side of the kitchen table while we were talking and I was drinking out of my half-pint mug.  When I got to the bottom of my glass of water I said to myself, that would make a neat photo and so here he is, an artsy one of son as taken through the bottom of the glass with my cell phone.  No I can't stop myself and my two fave guys are always so patient with my desire to record everything in our lives, even in artsy ways.  I can almost see my Dad smiling, he was the same way. 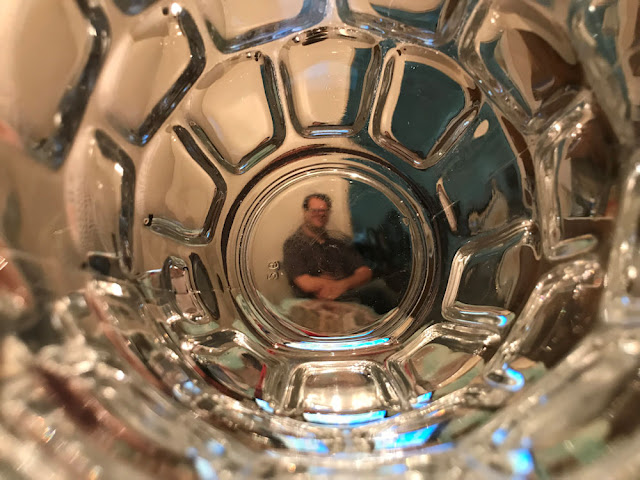 Next is a photo of my Mother's Day flowers.  They have lasted longer than I expected.  A few of the flowers are gone but most are still viable.  There were three wood lilies, and one took longer than the others to open up.  When I came downstairs a week later, this pretty bloom greeted me. 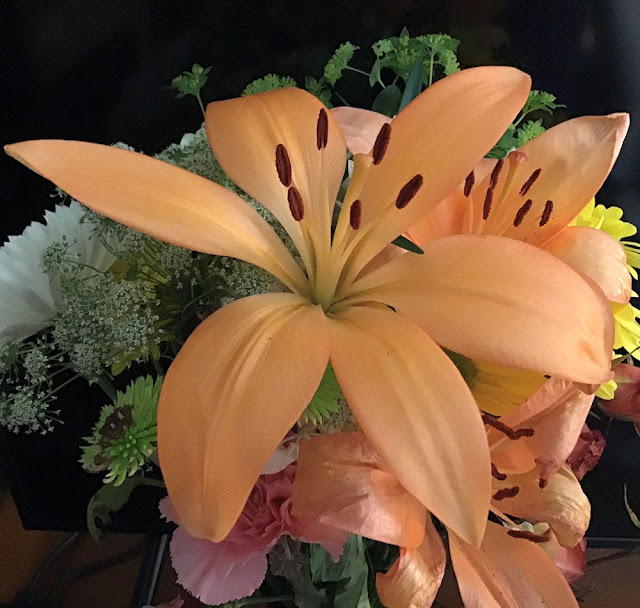 These were looking good also.  The flowers have lasted longer than usual.  I added plant food when I first got them, and fresh water every day, which is what I do with any flowers I get.  Always happy when they last this long.  They do brighten the place up. 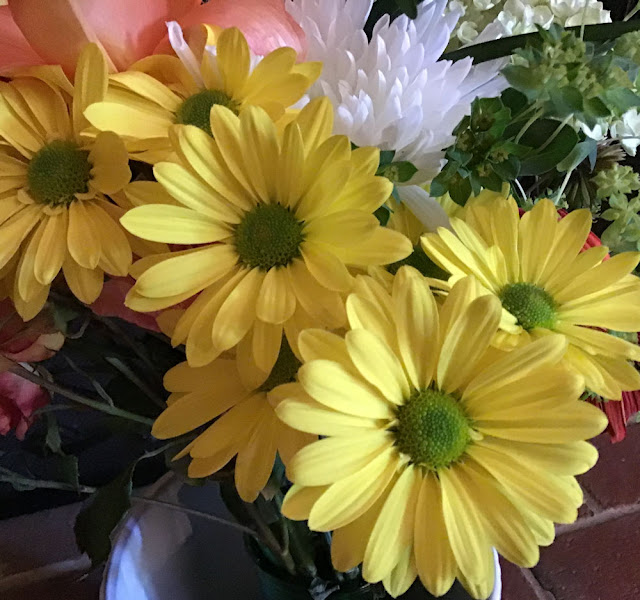 We made a start to our planting before the heat gets too high.  Hellebores o. 'Pine Knot Select', hoping for a deep pink but I will be happy with what comes.  We also planted a couple of Pica Bella Coneflowers.

This week we will be buying more as we are trying to fill in a shady part of our garden and those frosty nights should be over by now.  The coneflowers will get more sun.  I want lots of butterflies and bees! 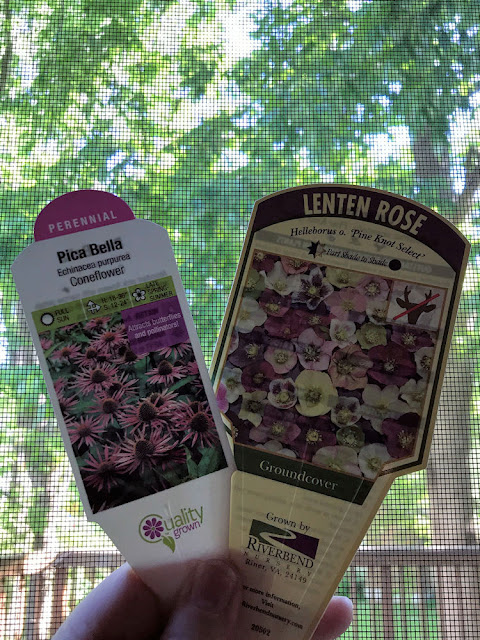 I was there to help out and act as gopher (go for this, go for that, you know how it is), but when Gregg asked me to get one of the tools he needed, on my way past another tree I saw a Catbird.  Yes, hubs got what he needed first as I gave him the box cutter, but I had grabbed my camera in the house and started taking photos of the bird.  I have to download them still and will post them next week sometime.  I was on call for the rest of the planting session, but I also wanted to take photos of our 17-year brood of Cicadas, which were/are everywhere.  Son took great shots near their place and has a lot more than we have.  They back onto woods.  I will share those in a few days also.  This is one I took.  Not everyone's cup of tea, but like all things in nature I find them fascinating. 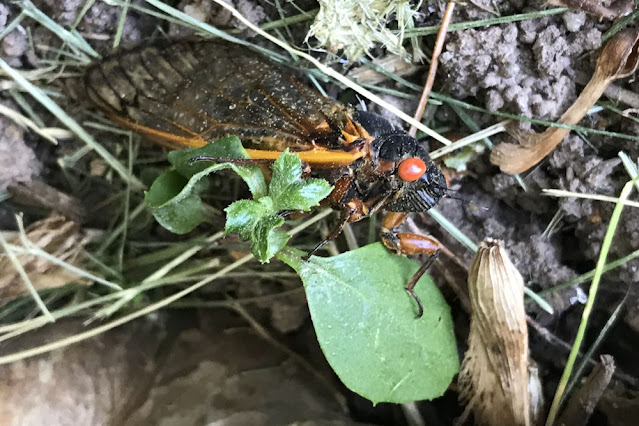 I saw my first Cicada yesterday and I was wondering when we would be getting ours.  Last night we heard them singing, they were really loud!  As I walked around the garden I saw all these small holes in the dirt, and looking up there were dozens of their shed shells on the trellis.  Then I looked over at one of the hostas, one that needs to be trimmed as half of it seems to have died.  On the bare branches that needs to be removed, there were about a dozen or so shed skins.  Then I looked over at our Willow Oak and there were more on its trunk, one I saw in the process of shedding, and more like the one above climbing up the tree, there were several like that actually.  One stopped when I got close to it with my cell phone.  I hope this short video comes out as I think it is the first time I have tried loading one since blogger changed things around.  If it doesn't work I will get back to it later and see what I can do.  Gregg had just found thick tarp that had been laid about a foot down, maybe the last time we had extensive work done on that area, and he was having a really hard time cutting through it with the tools he had, even with the box cutter he had asked for.  He had to cut through it for each plant and it was hard going.  There was no way I could help and I felt exasperated for him.  The tarp was so embedded into the earth that it was impossible to pull up any large pieces.  A future project for removal!

There were lots of maple seeds lying around so had to take a photo of those. 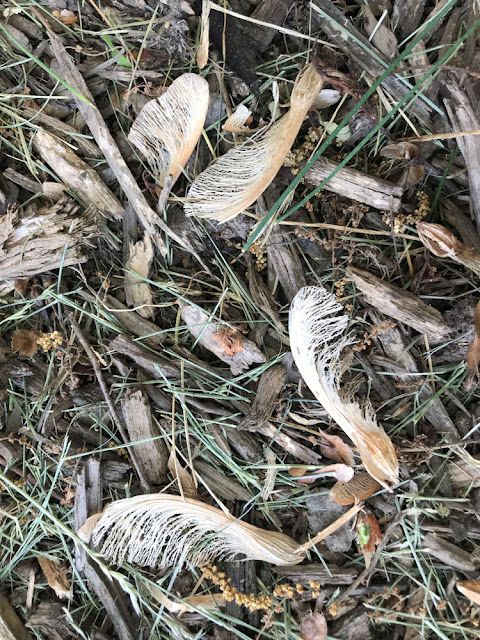 Next is a photo of a moth that was on the door screen when I went to let some fresh air in.  Pretty little thing but do not know what kind of moth it is.  This was also when I came downstairs first thing.  Such a pretty day today. 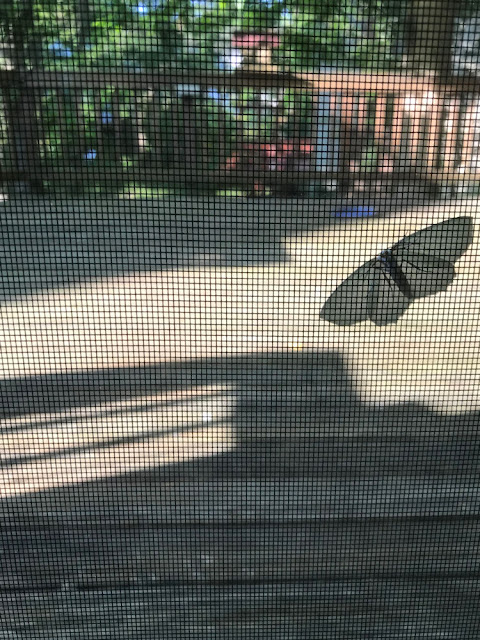 Someone posted the following on my neighborhood app, the same place I got my possum graphic that I posted yesterday (it is actually called an Opossum but I can't hear the 'O' sound very often).  There are a lot of animal lovers on my neighborhood app.  With the days getting hotter, it is a good reminder for the safety of our furry family members.  Even though we ourselves no longer have any pets, I still like to share these safety measures for others who do, just in case. 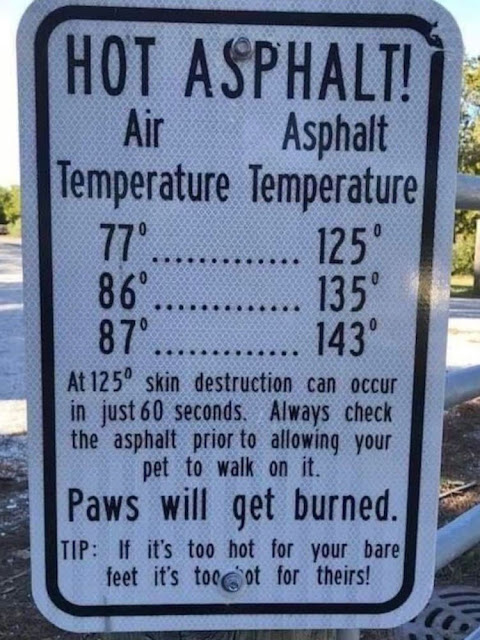 One of our neighbors across the street shouted hello when we were outside planting. He was walking up the hill with his dog.  I chatted to him for a while.  We both said how wonderful the weather was and I said something like it's nice to be getting back to normal, at which  he said with emphasis, oh yes it certainly is.  I asked him how his family was.  They had a baby girl not too long after they moved here and she was almost a year old already.  I was shocked.  It is hard to believe but with everything going on, not too many people have been out and about, and time has certainly marched on.  Yes, things are slowly getting back to normal.  No photos of our neighbor and his dog, but a nice memory of pleasant conversation.
A very nice young man, and his wife and other little girl are the same way, and their dog usually comes over and says hello.
One last photo of a weekend treat.  Gregg makes the most delicious coffee milk shakes.  It is his memory from childhood.  He spent a lot of time in New England while visiting with his Mother's family.  He remembers New England milkshakes being thinner, which he prefers to this day and he makes them the New England way, at least from his memory of 60  plus years ago.  We lived in New England for about a year-and-a-half in Newport, Rhode Island.  We hadn't been married long but I don't remember what their milkshakes were like.  Have to say his are the best I have ever had.  I don't say it just because I know Gregg enjoys reading my posts, it's the truth. 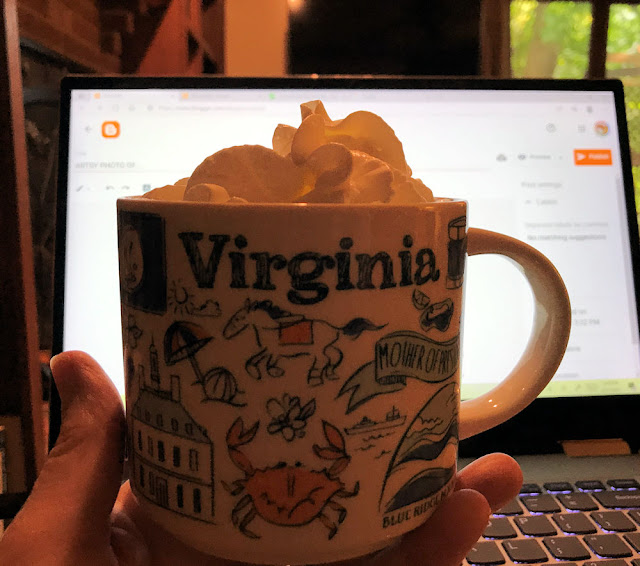 A bit of a hodgepodge today and I realize I am all over the place.  This day has gone by so quickly and it's time to publish this before I put the computer away.
Thanks for stopping by and have a great weekend.  I will be back on Monday.