A WALK AROUND GLEN BURNIE GARDENS IN WINCHESTER, VIRGINIA - PART 1

The first five photos I am sharing today were taken by Gregg.  I always enjoy seeing his view through our camera lens. 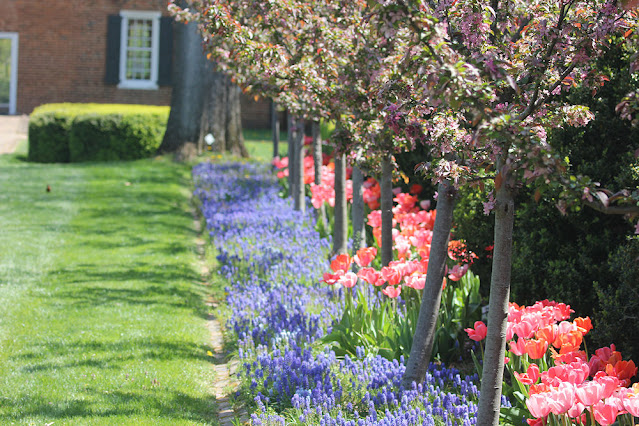 Towards the end of last month we drove an hour-and-a-half to the garden.  It was our first mini road trip in a very long time.  To reach here you head for The Museum of the Shenandoah Valley, which we have visited only three times over the years.  However, we have never been to the garden next door, and now we are more able to get out and about, I asked Gregg if he would like a road trip.  I don't have to ask twice thankfully, as he is always eager to point the car over the next green hill. 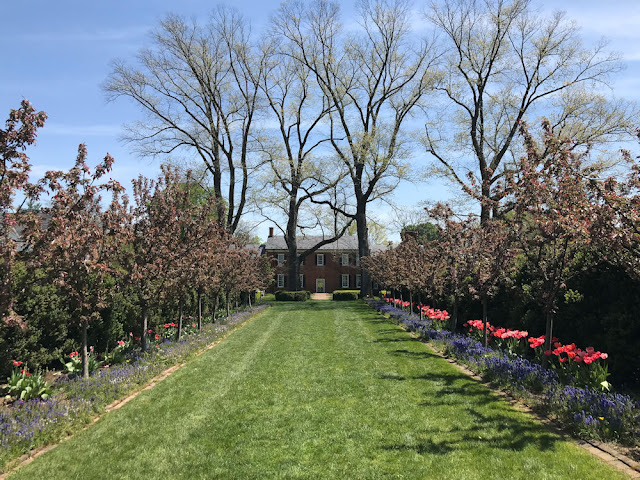 At the other end of this pretty green area, is the Glen Burnie House.  This is what I found on line: "It sits on land that Winchester founder James wood surveyed, claimed and then settled in 1735.  The oldest portions of the house were built by Wood's son Robert in 1794 and 1797." 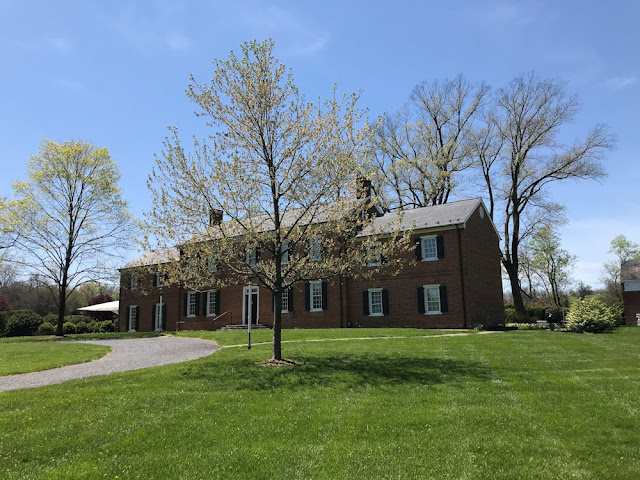 "In the 1950s the 214-acre property came to be owned by a Wood descendant, Julian Wood Glass Jr.  Glass preserved and renovated his ancestral home from 1958 to 1959.  Then aided by his partner at the time, R. Lee Taylor, he transformed the house into an opulent country retreat surrounded by six acres of formal gardens, and furnished with one of the most remarkable private collections of decorative arts ever assembled in the Shenandoah Valley." 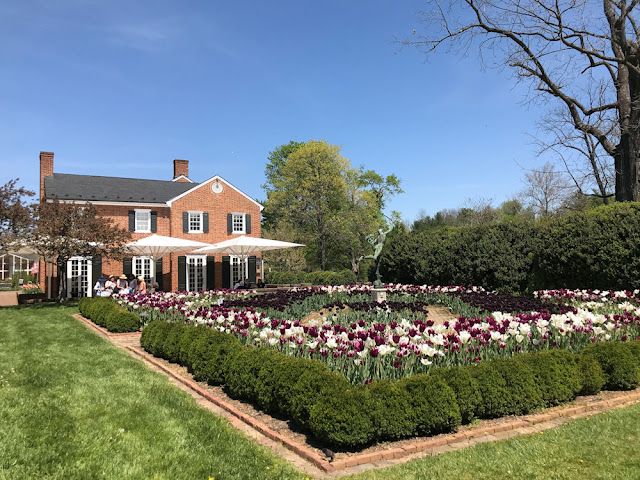 "After his death a condition of his will stipulated that the house and gardens were to be opened to the public on a seasonal basis in 1997.  They are now an important part of this year-round regional history museum complex known as the Museum of the Shenandoah Valley." 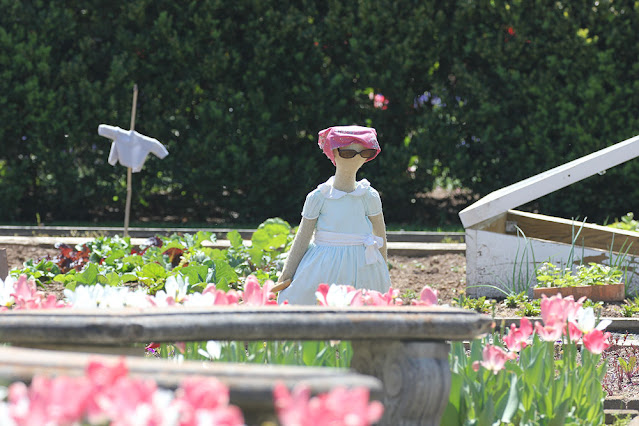 I enjoyed the smartly dressed child scarecrow .  The mother scarecrow was there also.  This is their vegetable garden with a few flowers, like the tulips.

It will be very nice to go back when the seedlings have had a chance to fill in. 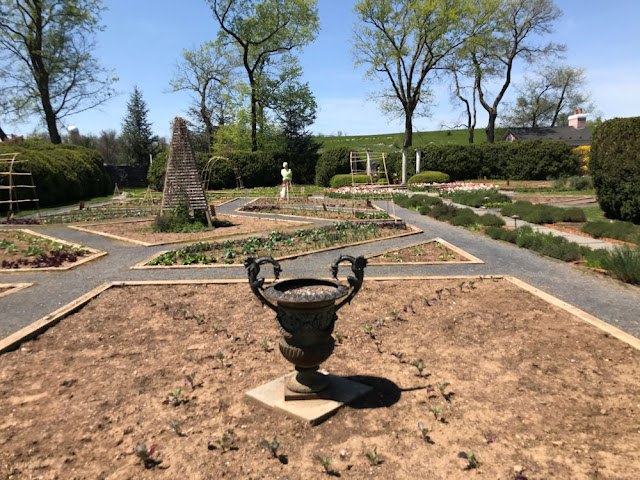 The small area below is the Pink Pavilion and the Sunken Garden.  "Julian Wood Glass Jr. designed this building for entertaining.  The windows were made to be raised up to create additional doorways.  On cool evenings, a wood-burning fireplace kept guests warm.  Glass and Taylor also furnished the pavilion from Glass's collection of antique furniture.  A lover of classical art and literature, Glass had at one time studied architecture.  He designed the building in the style of the Renaissance architect Andrea Palladio (1508-1580).  Glass also designed the nearby pool and fountain." 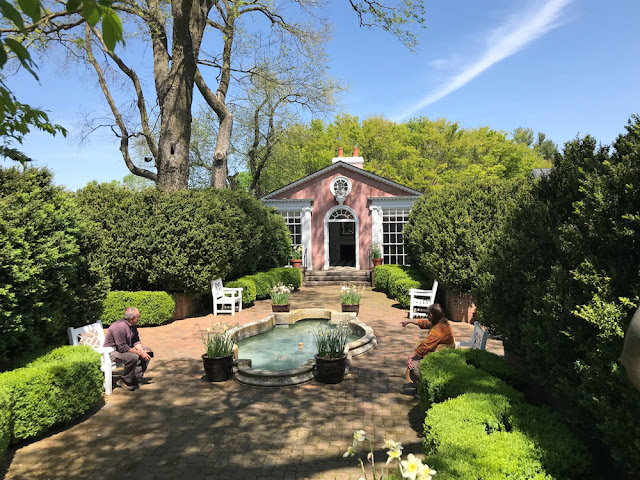 I was at the top of a few steps, having come around a corner to this pretty area.  There were two people deep in conversation and as I didn't want to disturb them, I turned around and continued the walkaround in the other direction, after one quick photo!  Hopefully we will be able to sit where they are next time, and enjoy its peacefulness and solitude.  Forever in your debt Mr. Julian Wood Glass Jr.  You left a wonderful legacy for us all to enjoy. 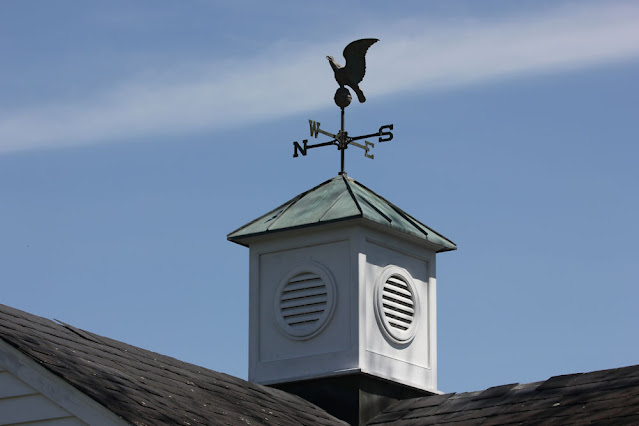 Their are sculptures placed around the garden.   I thought the following piece was poignant.  We were in Kathie's Spring Garden, and there were three statues given to the museum by Rupert Werner in memory of his wife.  Always curious I searched on line for information, and found a YouTube Video that you can see here.  It is from five years ago and will show you how this wonderful couple gave back to their community.  I wish I could have known them, to say thank you, as they also left an amazing legacy to many.
On her statue I read: "Kathie, 2019, by Mark Hopkins.  Patinated Bronze.  Acquired for the MSV by Rupert Werner in memory of his wife Kathryn Perry Werner." 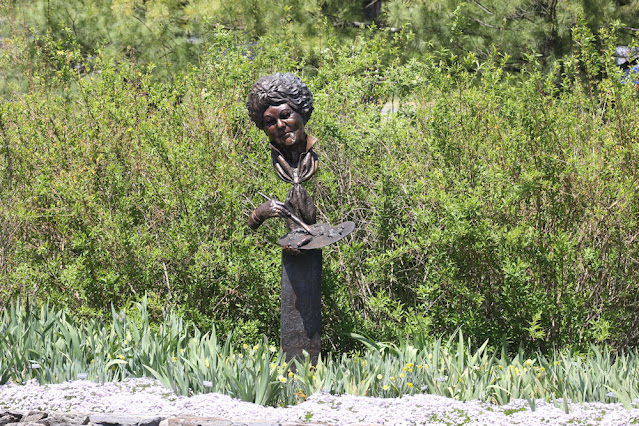 "Among Kathryn Perry Werner's many interests was a love of painting.  With palette and brush in her hands, Kathie here tilts her head slightly as she contemplates the subject before her.  For sculptor Mark Hopkins, the challenge of creating a portrait - particularly in a memorial one - is capturing the image people have in their minds of the sitter's personality and appearance.  Added to that is the challenge of working from photographs and translating a two-dimensional image into a three-dimensional sculpture.
Faced with these hurdles, Hopkins focuses on the essence of the person represented, and seeks to capture her spirit.  Through conversations with her loved ones and careful study of photographs, Hopkins sought to create a work suggesting the determination and confidences of the subject, and the strength and spark in her face." 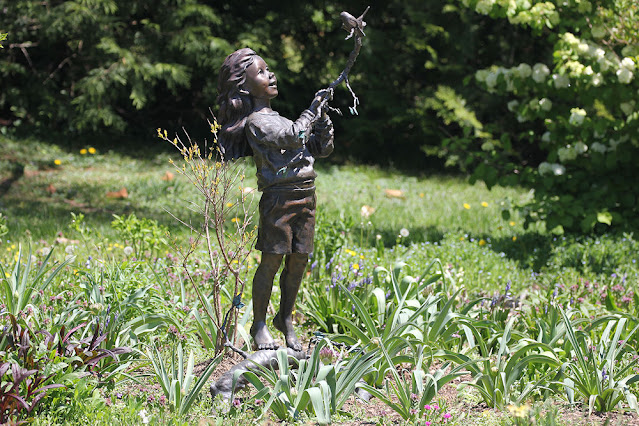 I shared the statue of the little girl before - here - and is another that was acquired for the MSV by Rupert Werner in memory of his late wife.  There were two of them, one of the little girl and another of a little boy that I missed, so I will just describe the little girl.  I will make a note to find the boy next time.
Entitled Friends in High Places, 2017, and also created by Mark Hopkins in Patinated bronze. The information I found on the little girl said "she has climbed a tree to stand on her tiptoes as she gazes at her two "friends" - birds perched on a branch".
I think they are amazing and admire Mr. Hopkins sculptures very much.  He has an obvious love and  dedication to his work.
There are other statues in the garden I will share at a later date.  The two above are the more contemporary ones.  I am grateful for the amazing story of Mr. and Mrs. Werner because of seeing these beautiful statues. 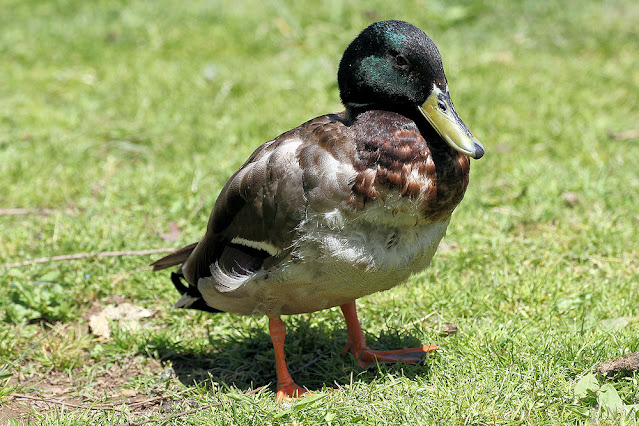 I managed only one relatively decent photo of a mallard.  The others in the water were hard to photograph.  They were bobbing for tasty morsels. 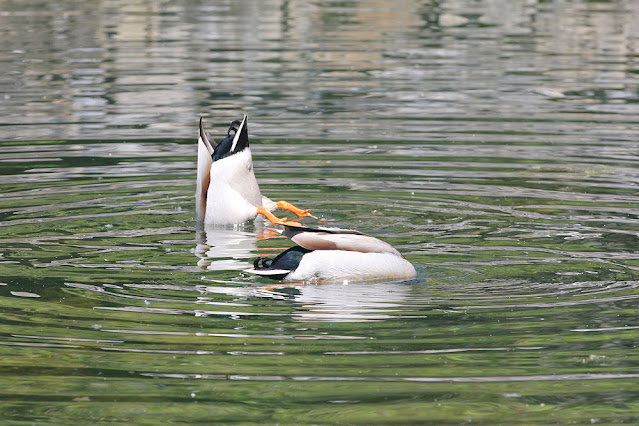 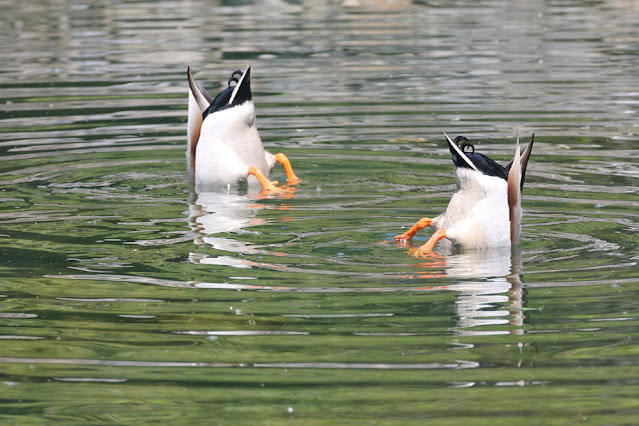 Here are those Forget-me-nots I shared before. 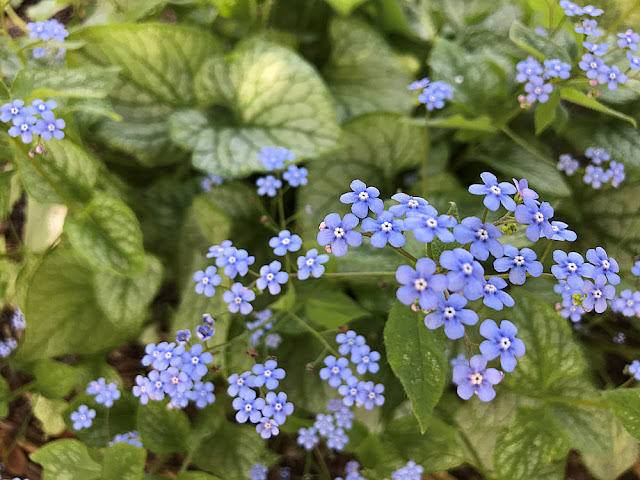 We were walking out of the garden when I saw this area.  It was left for next time and looks a nice place for a quiet moment or two. 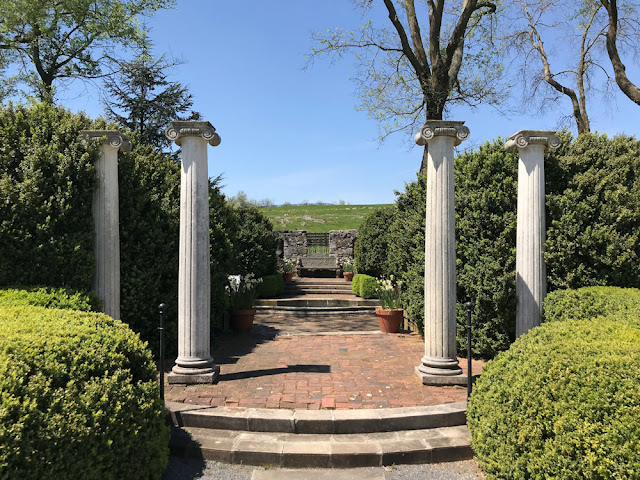 A close-up of the above stone bench. 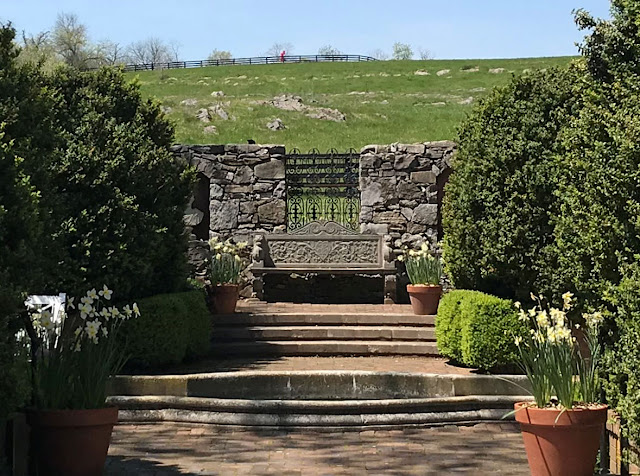 The tulips were still blooming. 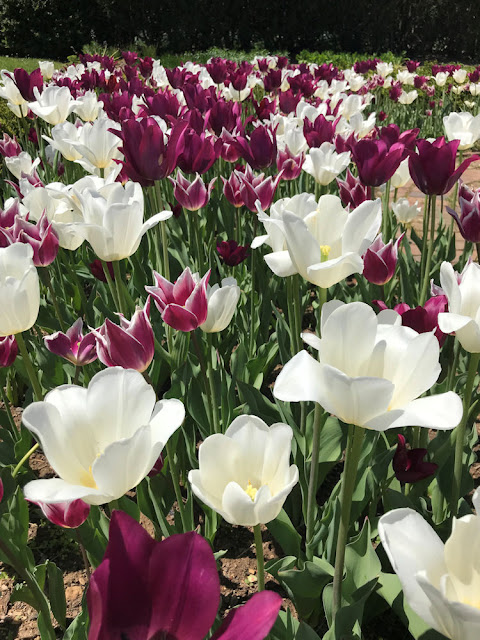 Many may already know that the following pretty flower is the Moss phlox, also known as Moss pink, Mountain phlox, Creeping phlox and Britton's phlox.  Its botanical name is Phlox subulata.  It is native to the United States and the Latin name Phlox subulata means needle-shaped, which describes its leaves.  Its symbolic meaning is maternal love and charity.  And I found all of this on my plant app called "PictureThis." 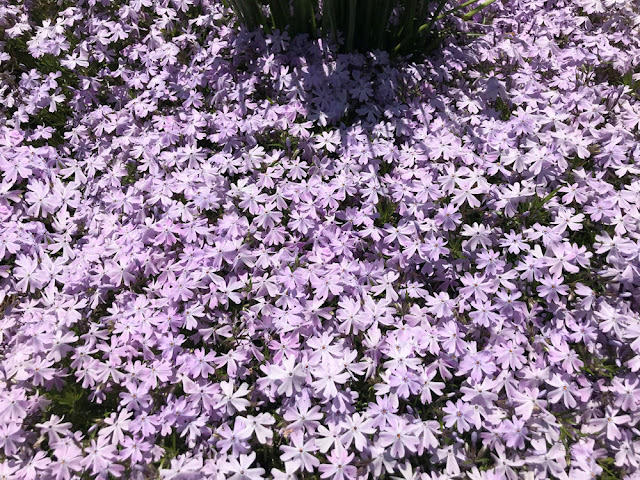 This is my last photo for today, and I will share others on the garden as soon as I can put a post together. Email ThisBlogThis!Share to TwitterShare to FacebookShare to Pinterest
Labels: Birds, Ducks, Flowers, Sculptures and Statues, The Museum of the Shenandoah Valley_Winchester_Virginia, Winchester_VA