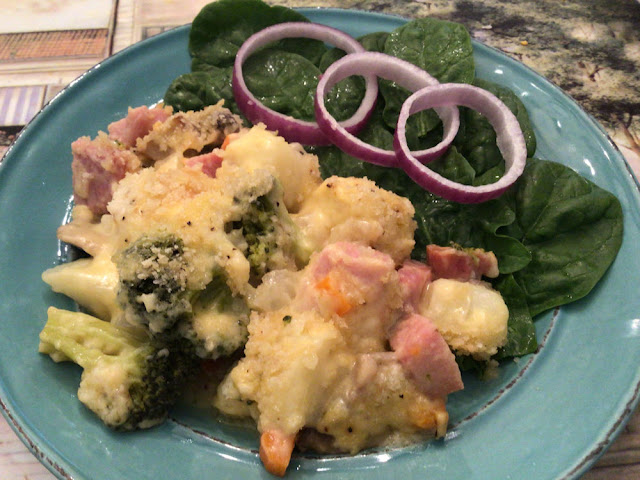 Today's recipe came from Christine at Christine's Blog here.  Her inspiration came from Taste of Home at this address.  It was a big hit in this house as we gave it a ten out of ten.  I made a few changes depending on what I had on hand, which I will detail below. 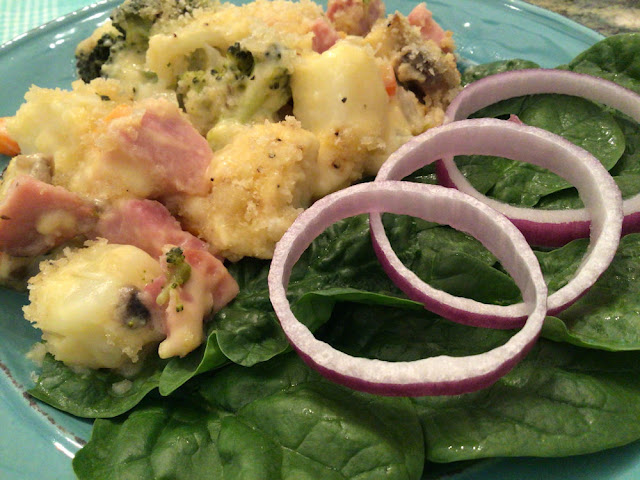 1/4 tablespoons butter set aside for topping

1/2 cup breadcrumbs (Christine used panko as did I)

In a saucepan bring cauliflower, carrots, celery to a boil.

Cook for 15 minutes and drain.

When softened mix ham in.

Transfer to a baking dish lined with parchment paper.

Stir constantly until thickened, about 2 mins.

Add cheese and stir until melted.

Pour over ham mix and sprinkle with breadcrumbs. 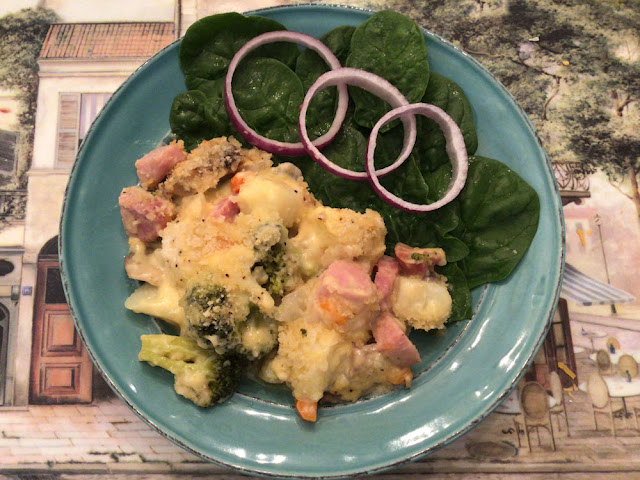 4 medium potatoes (because someone said “What?  No potatoes?”)

I added a diced parsnip it did not overpower the other vegetables, very subtle

I added an extra 2 carrots as they were small and wanted to make up for no celery.

I diced them all up and instead of sautéing the onion and pepper in butter, I put all the vegetables (except the potatoes) in one large pot of boiling water for 15 minutes, not adding the sweet yellow pepper until I mixed it in with the ham and vegetable mixture before putting it into the oven.  I cooked the potatoes separately because I couldn't fit them into the one pot. I felt a bit lazy skipping the sautéing part out, but after all the preparing of the vegetables I went the easier route and did them all in one step.  I couldn't tell the difference once everything had been put into the casserole, did not miss the extra butter and the finished product was creamy and very tasty.

(I made an early start to our meal and got in the kitchen first today.  Gregg announced this was the best casserole that I had ever made.  I can't remember the last time I made a casserole to tell you the truth, but I was happy he felt that way as he is honest and helpful in his constructive critiques.  I welcome them.  It’s what we do when we both cook). 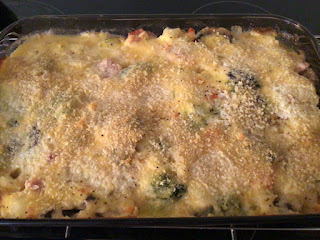 I put everything into a 13 x 9 inch glass dish, and there were leftovers for other meals, which only tasted better the next time.

You can freeze any leftovers even with the potatoes.

I served the casserole with a few fresh spinach leaves and rings of red onion on the side.

The aroma in the house was wonderful!

Thanks Christine, this was a definite keeper.  I got to use up a lot of leftover ham after Easter (I made this recipe shortly afterwards) and added a new meal for the next time we have company.

Thanks for taking a look everyone and have a great week.