A WALK AROUND WALNEY VISITOR CENTER AND POND - WEDNESDAY, MAY 21ST, 2021

We enjoy going here several times a year.  It has been a long time since we went inside the visitor center but we often walk around the grounds.  The pond is down the hill and we went there afterwards. 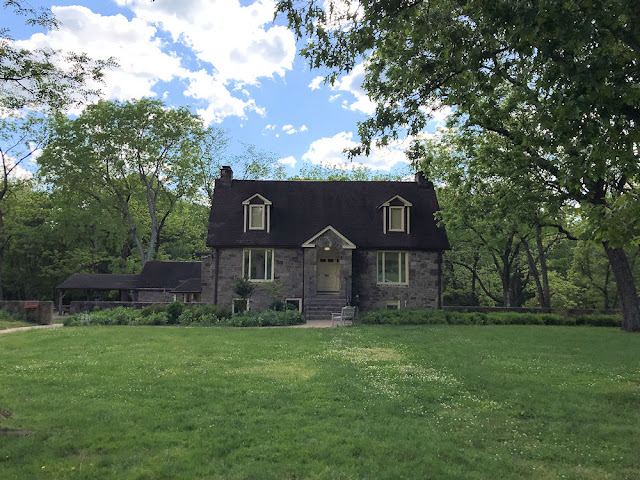 You can read more of its history if you click here.  I borrowed the following from their website.  It is as it looked c 1780.  According to the website: "In 1742 Thomas Brown signed a 'three-lives' lease on 150 acres south of Big Rocky Run.  Through a 'three-lives' lease, the Brown family would hold the rental rights of the property for the duration of the lives of those listed on the lease.  The three were Thomas, his wife Elizabeth and their oldest son Joseph." 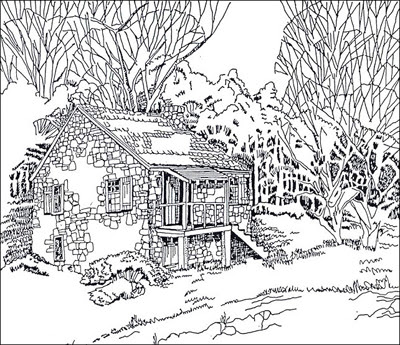 It has a very interesting history and goes on to say that others believe the house was built in 1780 by Coleman Brown, Thomas Brown's son.  The Machens (shown in the photo below) purchased the house and 725 acres of property from Coleman Brown's grandchildren in 1843.  Lewis Machen named it Walney after Walney Island.  This island is off the west coast of England, at the western end of Morecambe Bay in the Irish Sea, and his family had lived there.  When Lewis Machen and his family arrived on the farm, it was rundown.  He made several renovations to the property, including restoring the stone house and turning it into a library and study, while the Machen family lived in a wood frame house nearby.  Fire destroyed the wood house in 1874 when Lewis' son, James Machen, and his family lived there.  Rather than build a new house, James decided to remodel and expand the stone house.  Their story goes on but you can read more at the link I have given above. 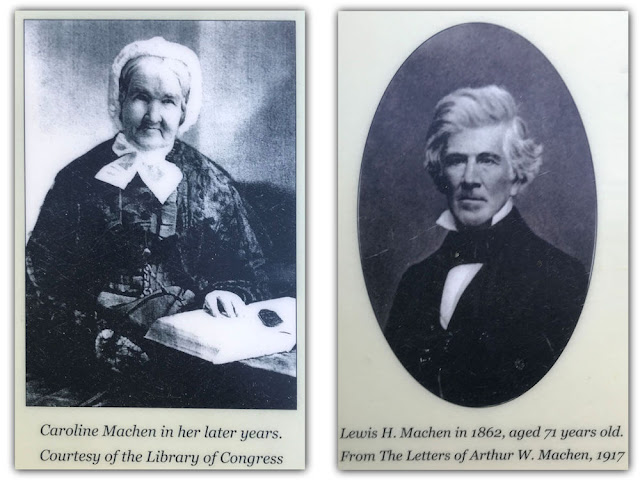 In 1935 the house and land was subsequently purchased by Ellanor C. Lawrence and her husband David Lawrence for a retreat.  They also bought the Middlegate Complex down the road a little on the other side, where they lived while visiting, and also Cabel Mill which they used as a guest house.  Her husband was a columnist and founder of U.S. News and World Report, and they had lived in Washington DC since 1916.  (I couldn't find much information on Ellanor unfortunately.)  Ellanor was very keen to  preserve its original character.  She eventually left the property to her husband with the intent that it be given to a public agency, and that its cultural and natural features be preserved.  David Lawrence, her husband, deeded 640 acres of Walney and Middlegate to the Fairfax County Park Authority in 1971, and it was named the Ellanor C. Lawrence Park in her memory.  Would they have been surprised to learn that 30,000 visitors come here every year? 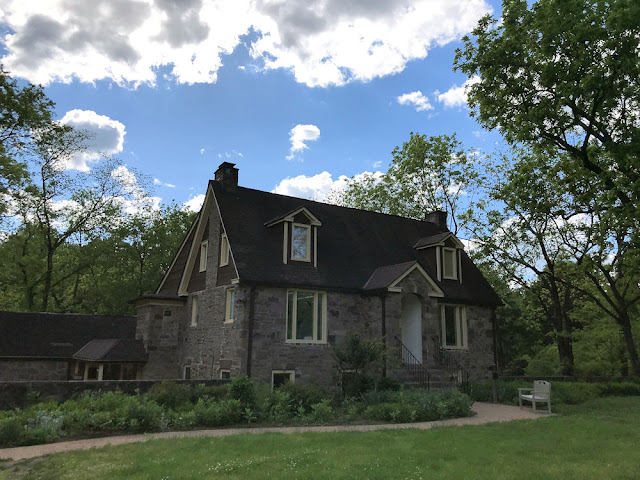 Along the front of the house there are lots of plants and flowers, and I am looking forward to seeing them bloom.  No blooms to enjoy today but these were  interesting. The first photo I share is that of a Cutleaf coneflower, also known as Green-headed coneflower, Wild golden glow, Sochan and Thimbleweed.  It is native to North America, an herbaceous perennial.  The flowers of this plant are similar to daisies, consisting of a cone-line pinecone in the middle and small petals around it.  Its leaves are featured with smooth to rough toothed edges.  Some of the lobes even have two small lobes at the end of their leaves, so it is often called Cutleaf coneflower. 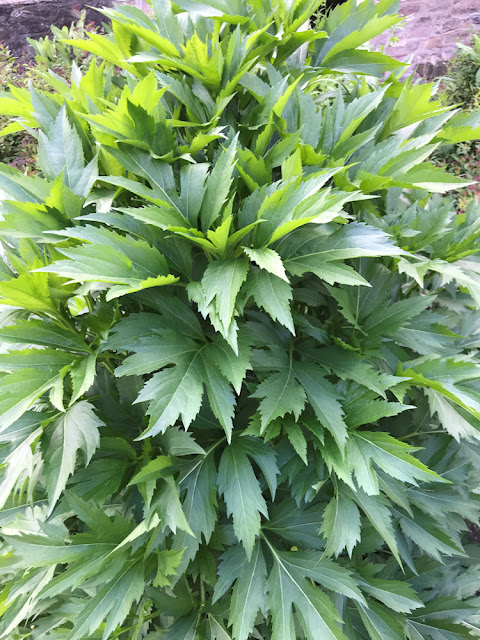 Our next plant is called Palestine woundwort, a species of Hedgenettles.  Its botanical name is Stachys palaestina.  Other names are Hedgenettles, Lamb's ear (this is the one that I remembered it as), Betony, Self-heal and Woundwort.  It is a perennial and originally native from Syria to Israel.  Recently only within the last 6 years, researchers have found that it is possible to create essential oil from this species.  The essential oil has a unique chemical profile, mainly composed of terpenes, chemicals that often have aromatic and medicinal properties. 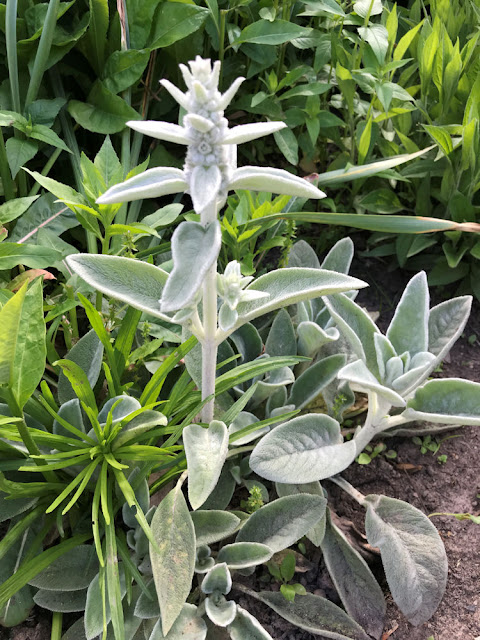 Next plant Common milkweed, also known as Silkweed, Butterfly flower and Silky swallow-wort. Its botanical name is Asclepias syriaca.  It is a perennial and native to North America.  I also read that a good time for planting this is in the Spring or Fall.  The leaves of milkweed plants are the only food that Monarch caterpillars can eat.  It contains a milky latex and if consumed in large amounts it can be toxic to sheep, cows and other larger mammals (including humans).  Many insect species are attracted to common milkweed, most notably monarch butterflies. 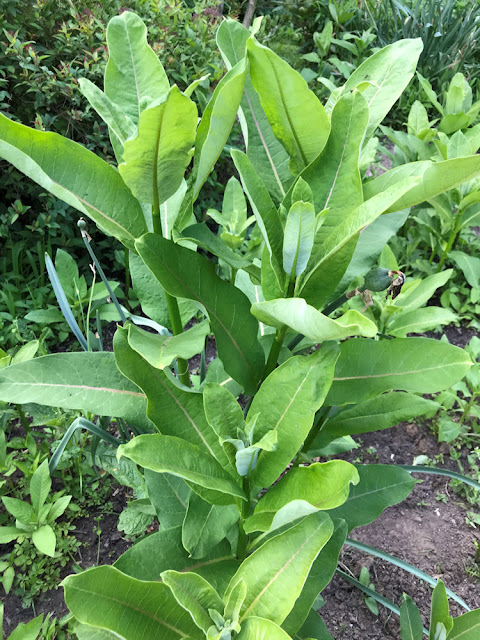 We always enjoy visiting the garden when we come here, and just around the corner is the kitchen garden.  The fencing around it is to keep out animals who would like to munch on those vegetables, like the deer perhaps. 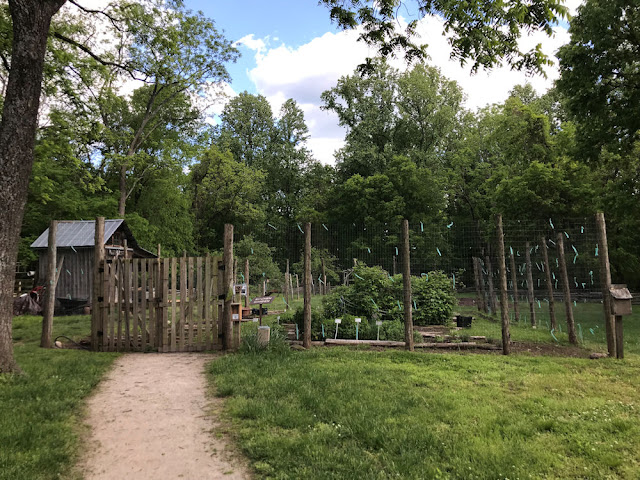 We always leave a donation as they do such a lot of good here.  I remember coming once a few years ago when the gardeners were harvesting some of the produce, which was offered to us.  We said no thank you, that they were kind to offer, and at the same time told them we really appreciated all their hard work 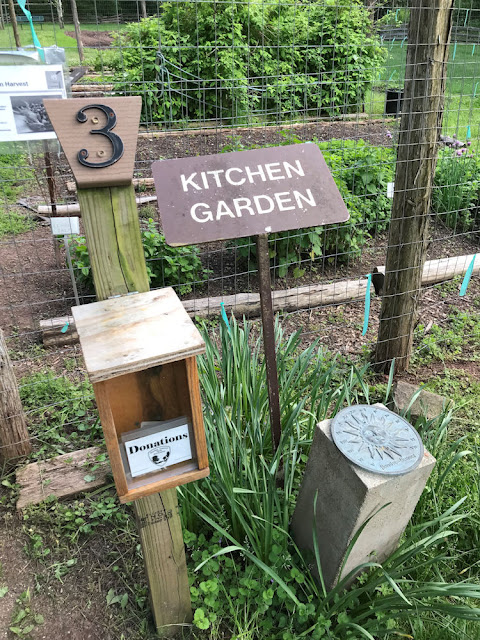 The next two photos will show the times the garden is open, and what they grow there. 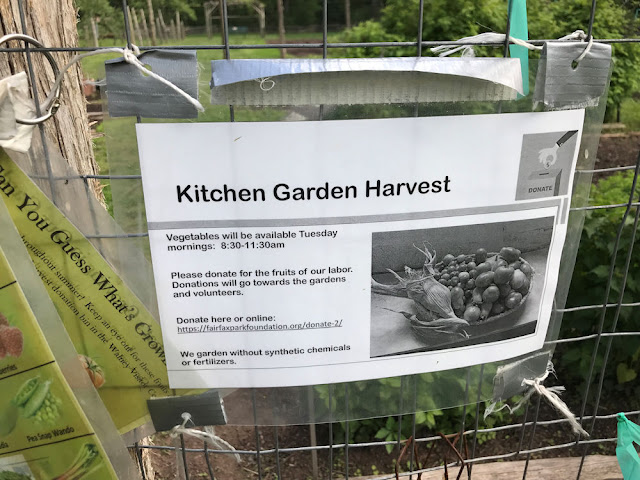 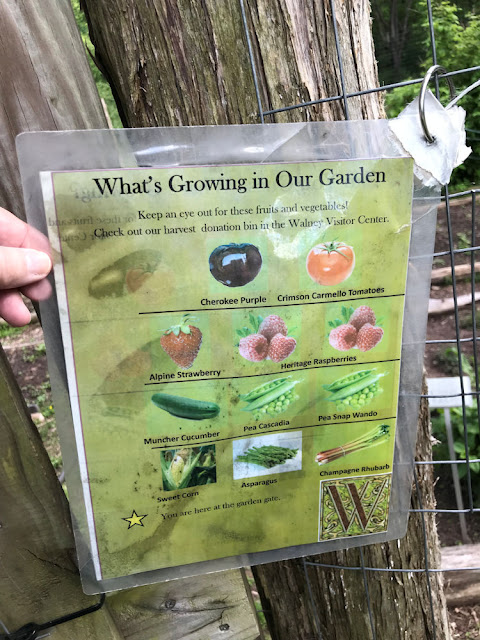 I took this photo through the wire fence as everything was locked up when we were there.  We arrived later  in the day. 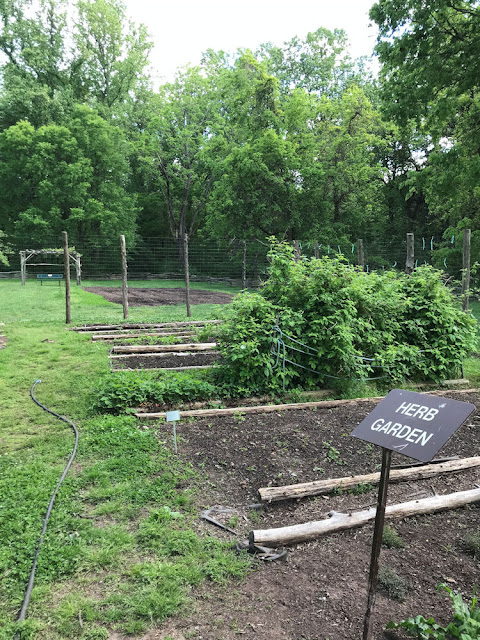 I am guessing that the blue ribbon is to keep the birds out?  Maybe?  However, there is a nesting box within, and we watched as bluebird parents went back and forth to feed their babies inside. 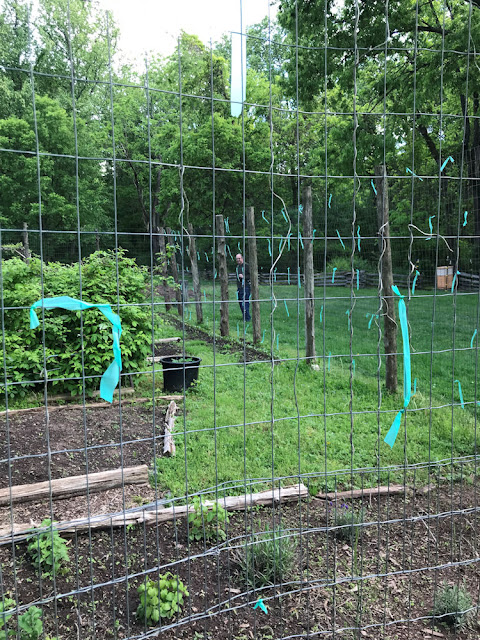 When we first started visiting many years ago there were two bee hives.  Now there is only one and it has been surrounded by an electric fence for the last couple of years, also to keep animals out I'm assuming.  The next time we visit hopefully the visitor center will be open.  I would like to ask more about the garden and the hive, and the honey that is collected, what do they do with it? 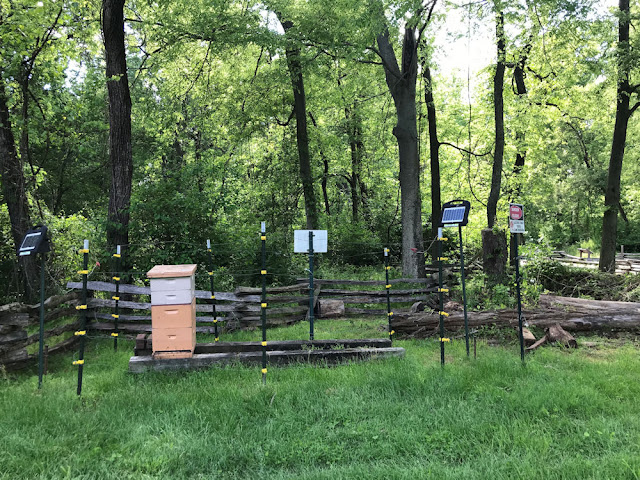 Here is a bench with our name on it.  No, not really, but it is new and I can't wait to sit underneath when the flowers are hanging from the arbor.  We sat for 20 minute watching the bluebirds flying back and forth to the nest.  I will have a post about the birds soon. 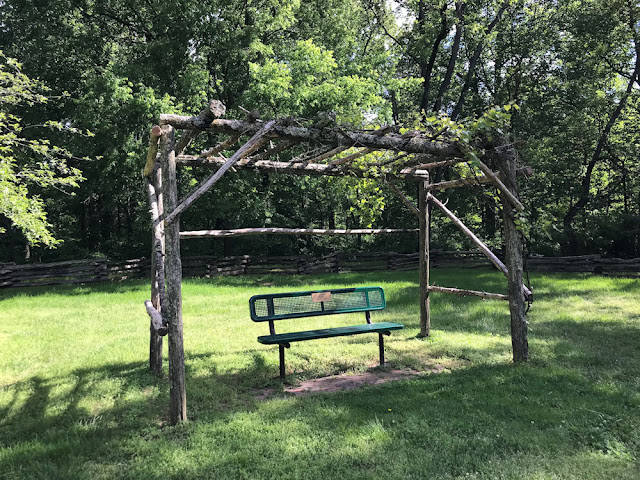 Last for today, a collage of the Buttercup.  It is described as the Bulbous buttercup, also known by the names I have included on the collage; St. Anthony's turnip, Bulbous crowfoot (the name I didn't have room for) and Frogwort.  A perennial and yes it can also be toxic, is toxic to most animals, including cats, dogs, horses and all livestock. (Many plants seem to be toxic. It sometimes makes me wonder how the first settlers dealt with this issue when they arrived in this country, knowing that there must have been a lot of experimentation looking for food.)  The buttercup contains over 600 species and are regarded as weeds.  You can read about the different kinds at this link. 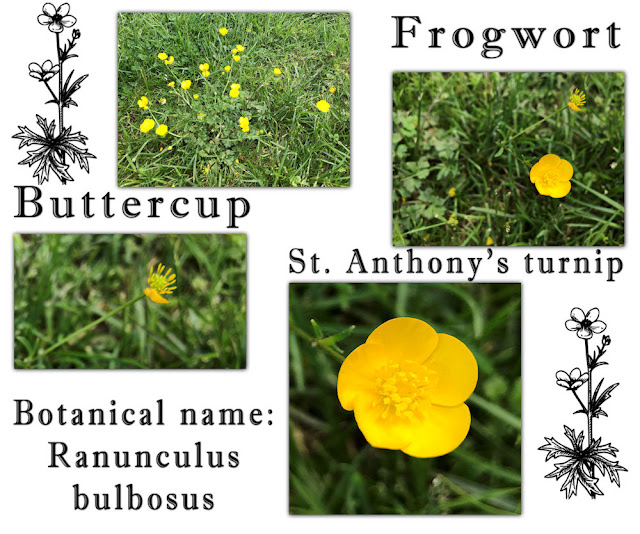 There will be more from Walney when I can put another post together.  In the meantime...