I have been busy going through our ornaments and have packed them away for next year.  There was one of the United States Capitol.   I bought it several years ago when we took a relative who was visiting at the time. 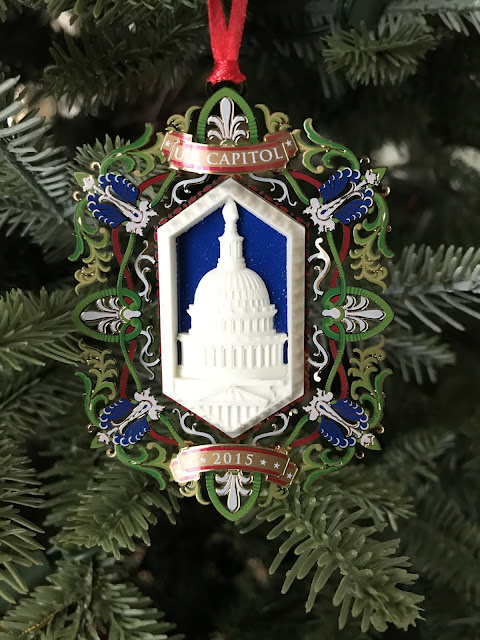 I felt the need to share it today.  This isn’t meant to be anything political.  Like many of us, no matter which camp we pitch our tent in, what happened there a few weeks ago saddened me greatly. 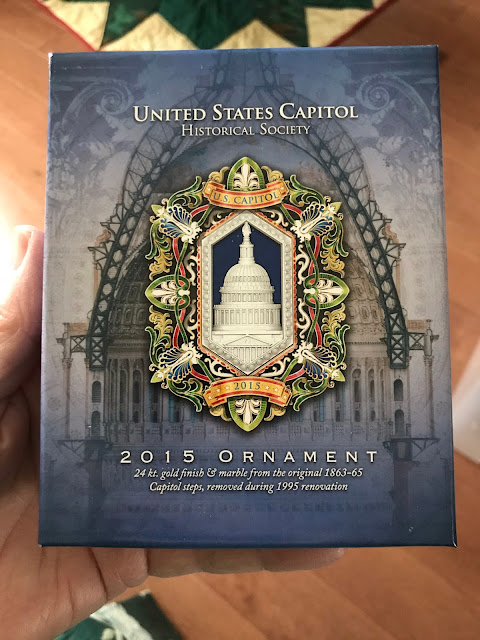 I hold it sacred having been there many times during my married life, and each time learning more of its history. 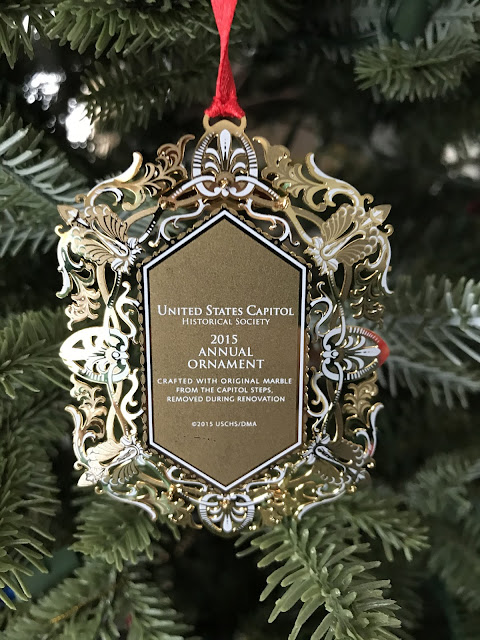 I thought I would share some of that history of how the Dome came to be.  The following is printed on the back of the box.
“The United States Capitol Dome may be the most famous building in the nation. It is a fitting adornment for the building it crowns, so familiar and dignified, that it seems surprising that its design and construction came late in the Capitol’s architectural evolution. On December 16th, 1854, Architect of the Capitol Extension, Thomas U. Walter, hung in his office a drawing of the Capitol as it would appear once the extensions were finished, but without the existing wooden copper-covered Bulfinch dome.  Instead the drawing showed a new much larger cast-iron dome with columns, pilasters, brackets, scores of windows and a crowning statue. While it was only a suggestion of what a new dome might look like, the drawing caused an immediate sensation among congressmen and senators who visited office.  Within 10 weeks, without committee hearings and after little debate, the House of Representatives appropriated $100,000 to begin construction of a new Capitol Dome.  The Senate agreed a few days later, and President Franklin Pierce signed the legislation on March 3rd, 1855.
The marble used for this ornament was taken from the steps to the wing occupied by the House of Representatives.  From 1865, when they were installed, until 1995, more than 9,000 members of Congress trod these east front steps, leaving footprints of history. Having become dangerously worn and uneven, the steps were removed in 1995, and the U.S. Capitol Historical Society has been permitted to use a portion of the removed marble, which is crushed to a fine powder and combined with resin, to create this memento.
Congress chartered The United States Capitol Society to educate the public about the nation’s history of the Capitol and Congress.  The funds from this purchase support educational programs as scholarly seminars and publications.  Your purchase also allows the Society to acquire and donate items to the collection of Capitol art, artifacts and historical documents.  Your membership in and patronage of the Society is appreciated.”
I had forgotten about the little piece of the Capitol hanging on our tree, and I feel blessed to have it there.
Thank you for stopping by.  I wish you all peace and a very happy and healthy weekend and week ahead.

Posted by DeniseinVA at 1:36 AM