PHOTOS TAKEN AT A DEMONSTRATION GIVEN BY THE RAPTOR CONSERVANCY OF VIRGINIA, CONTINUED. 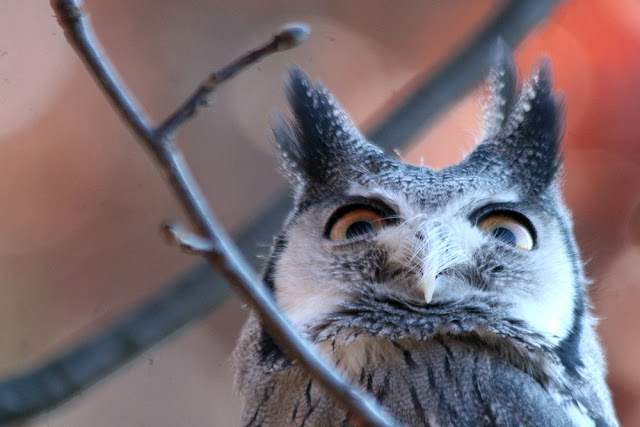 When I took these photos, I could not remember what kind of owl it was, so I searched for images on Google.  The White-faced Scops Owl was the closest I came. To be 100 percent sure, I wrote to the Raptor Conservancy and they confirmed my identification. Here is what they wrote:

"The owl is a 1-year old male, white-faced Scops owl. He was hatched and raised in New York State but is a native to South Africa. There is an amazing amount of personality packed into the little guy; he is very aware of what is going on around him."

My thanks to the Conservancy for their quick reply.

If you go to the end of my post and click on The Raptor Conservancy of Virginia label, you will be able to see all of them.

So, although this little bird had not been injured physically, I learned a long time ago that those birds kept in captivity or raised as a pet, are so imprinted with humans that it would be impossible for them to fend for themselves if released, as happens with any wildlife of course. I am still not sure if that is the case with this little fellow however as I don't know his full story.

All birds have a second eyelid that cleans and protects their eyes. It is called the nictitating membrane. Owls actually have three eyelids. They have a normal upper and lower eyelid, the upper closing when the owl blinks, and the lower closing up when the Owl is asleep. The third eyelid is the nictitating membrane, and is a thin layer of tissue that closes diagonally across the eye, from the inside to the outside. This cleans and protects the surface of the eye. Owls and hawks have large eyes that protrude and need constant cleaning. Any debris or dust blowing by will stick to the moist surface of the eye.


If you enlarge the collage of three photos above, you can see this membrane in a couple of them. 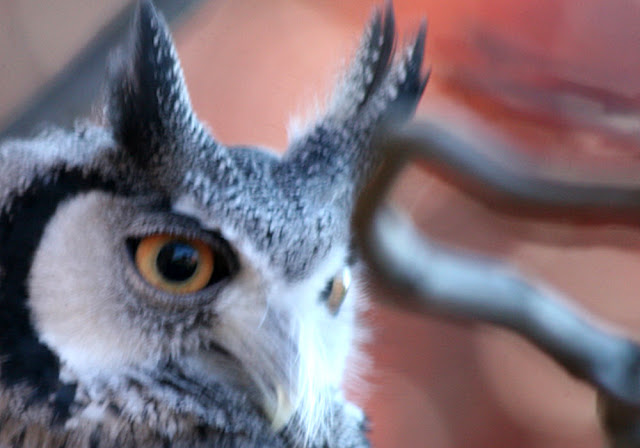 Of all an Owl's features, perhaps the most striking is its eyes. Large and forward facing, they may account for one to five percent of the Owl's body weight, depending on the species. The forward facing aspect of the eyes that give an Owl its 'wise' appearance, also give it a wide range of 'binocular' vision (seeing an object with both eyes at the same time). This means the owl can see objects in three dimensions (height, width, and depth), and can judge distances in a similar way to humans. The field of view for an owl is about 110 degrees, with about 70 degrees being 'binocular' vision. By comparison, humans have a field of view that covers 180 degrees, with 140 degrees being 'binocular'.

He was very cute. It was a little awkward getting to him because he had been placed on a branch not as easily accessible as the Screech Owl before him (next post). Not a problem for most, only a few more feet into the trees but lots of fallen branches and wet leaves covering hidden, broken off ankle twisters and as I was still recovering from my last bad sprain, I was a bit nervous of uneven ground. But as I usually am when I see something I really want to take a photo of, I'll go pretty much anywhere.  (Since I wrote this post I have learned to be even more cautious.  Growing older seems to have cured me). 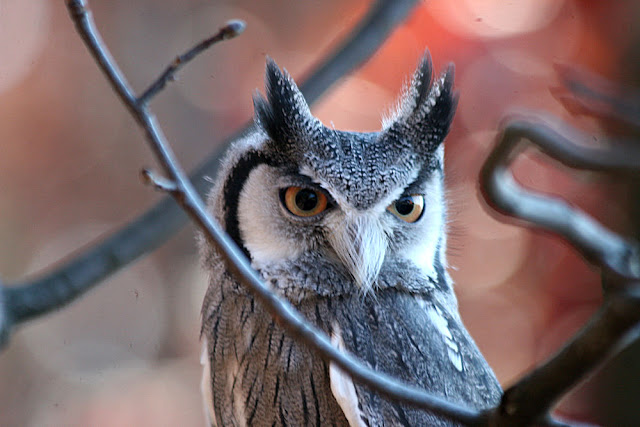 The nice thing about the shoot was that the two ladies wanted us to have as natural a background for our photographs as possible, which I was very grateful for. I have never actually seen an owl in their natural habitat (I have only seen one since, on a holiday high up in the trees in Florida).
I had been ankle deep in wet leaves, lots of overhanging vines and branches, and when one of the other group members came up behind me and said, "Excuse me but you have a spider on the back of your coat, may I remove it?" I answered calmly, "Oh please do!" After thanking the gentleman I looked at his hand and on it was the biggest daddy-long-legs I had ever seen. No it didn't phase me, 20 years ago it might have. However, here we are 20 years ahead of the scared little namby-pamby and this thought crossed my mind, I wished I had my macro lens.  But that was also in the boot of the car and I wasn't going back again to retrieve it.  Besides, my Scops Owl was taking all my attention.  I was riveted! 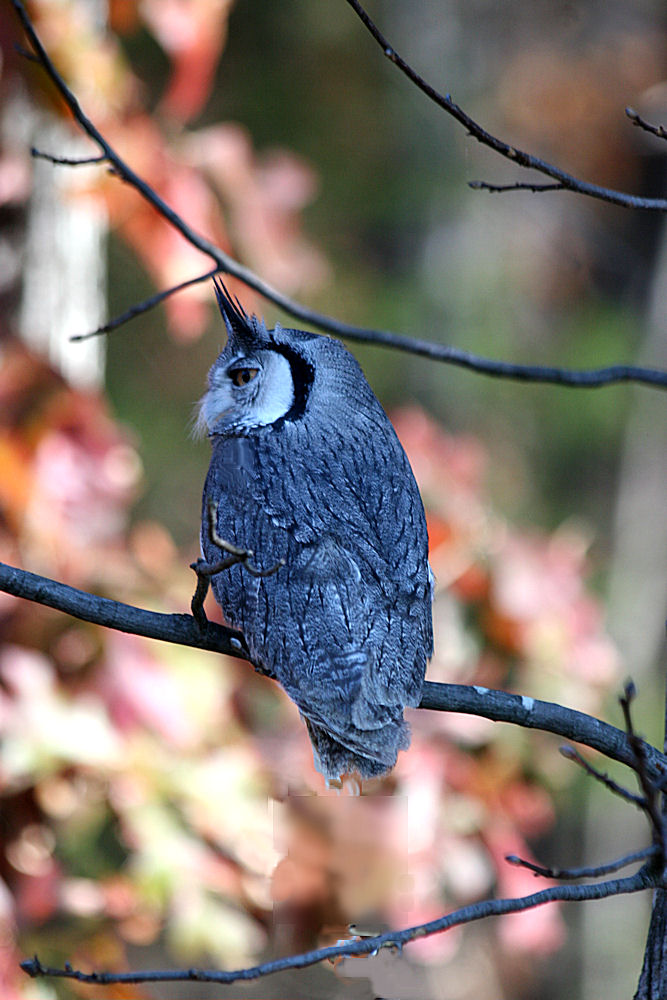 Attention span diverted momentarily, I was instantly back to my little owl. I might have mentioned this before, that I can turn into a laser and become extremely focused and he was most definitely what I was focused on.  I wended my way carefully towards him, not really caring what landed on me from overhanging tree limbs or bushes.  After 20 minutes or so I came away hoping that I had at least a few decent photos to show for my trouble. 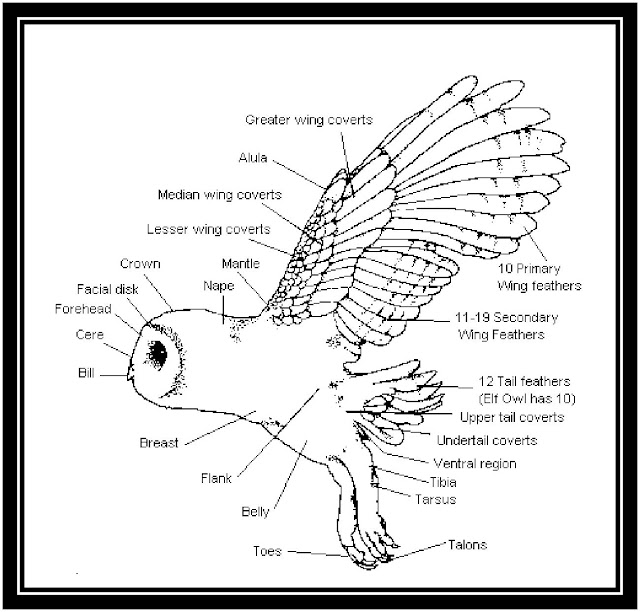 This is the generalized anatomy of the owl. I found it online.