A FEW FLOWERS AND PLANTS FROM OUR GARDEN

How are you all?  I hope everyone is hanging in there, and that your days are going well. 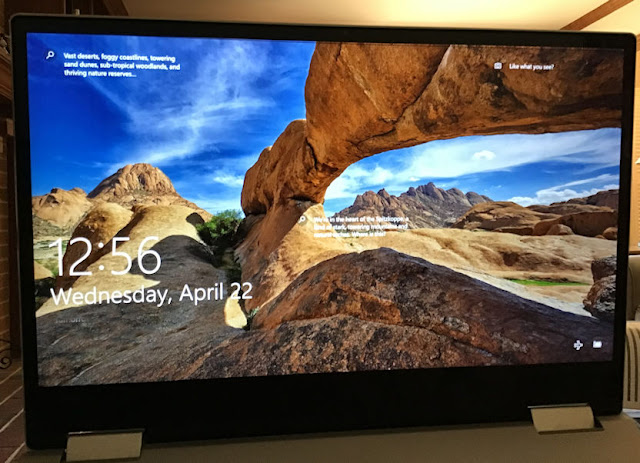 As you can see by the date on my laptop, I started this post on the 22nd.  This was the screen shot on my laptop that day.  More often than not I like the ones that appear when I turn it on.  They change every few days and come courtesy of the laptop company.  They show very pretty scenes around the world.  I enjoy my lessons in geography as my curiosity gets a reminder that it is a good thing to learn.  I always find out about the place shown with the snippet of information they provide.  At first I thought this was the Arches National Park in Utah, but I looked closer and read that the area is called the Spitzkoppe and the description reads, "A group of bald granite peaks or inselbergs located between Usakos and Swakopmund in the Namib desert of Namibia.  The granite is more than 120 million years old and the highest outcrop rises about 1,728 metres above sea level.  The peaks stand out dramatically from the flat surrounding plains.  The highest peak is about 670 m above the floor of the desert below.  A minor peak - the Little Spitzkoppe - lies nearby at an elevation of 1,584 m.  Other prominences stretch out into a range known as the Pontok Mountains."  Fascinating, and now we know.  One day I am going to make a post just of these screenshots.  Wildlife is also shown.

Our morning (on the 21st) started early at 8.00 a.m. when an electrician came around to fix one of the lights on the front of our house.  At first I thought it would be a much longer and harder job, but it was all done in less than half an hour.  Nice young man, interaction all conducted at a safe distance. We will get him again if we have any more problems, but I hope that won't be for a while.


As soon as he left we delivered a couple of bags of food to a friend of ours.  We have been making meals and putting one aside for the freezer, and I had a couple of these for our friend.  It was good to see her but we did our part and kept several feet away on the doorstep.  Unfortunately a chilly wind cut short our conversation, but we sent air hugs and were on our way. 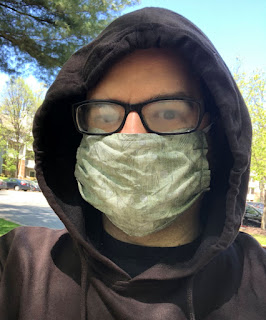 And who is this handsome lad?  When we got home the phone rang and it was our son.  I asked him to send us a photo as he was out on his morning walk. Mum always asks for a photo. We are definitely a photo-taking family.  This was our reward which was designed to make us laugh. I am always asking him if he is following all the guidelines when he goes out.  This proved it.  Yes, I tell myself,  I know he is 40 but he's still our kid, and more often than not he turns around and asks us if we are following the same guidelines in a very stern, authoritative voice, and we assure him we are, and inwardly smile.  Roles tend to get reversed these days.  Turn around is fair play.  His glasses were fogging up because of the mask which his Mother-in-Law very kindly made for him, and for us.  I asked if I could share it here.  He doesn't mind at all, hard to tell what he looks like with that mask on anyhow.  The three of us had a nice long conversation until he got back to his place.  Usually our daughter-in-law joins him but she was busy that day as, like our son, she is working at home.  We talk most days and never run out of conversation.  I guess you could say we are talkers!


A couple of days ago and needing a little fresh air after a few days of rain, we took a walk around the garden.  It was still very chilly and we weren't out there for long, just enough time to take a few photos of the plants that were blooming. 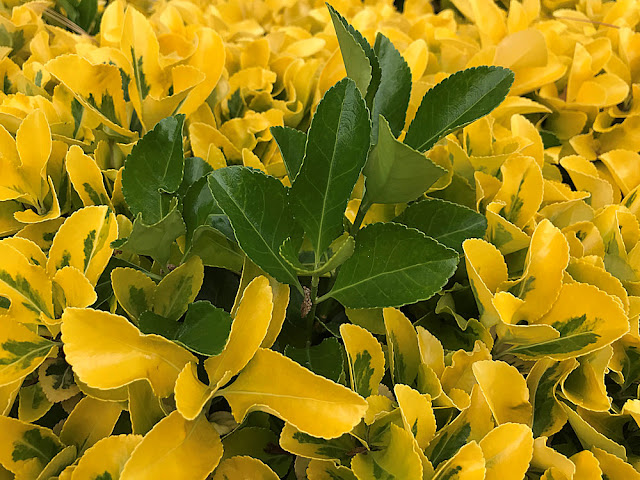 This is called Evergreen Spindle according to my plant app.  In the Netherlands they call this plant Spilboome, meaning a spindle tree.  Since the Dutch make spindles out of its timber, and also that this is native to Japan, it is now called Japanese Spindle Tree.  Maybe if we have any Dutch or Japanese blogging friends out there, they can verify the information. 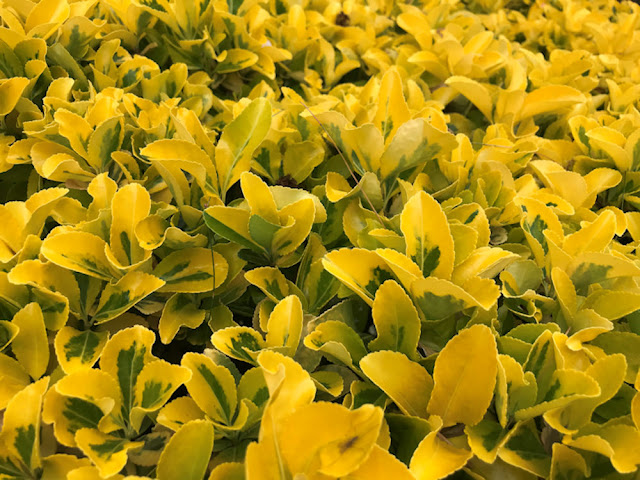 Next comes an Evergreen Azalea, a species of Rhododendron. 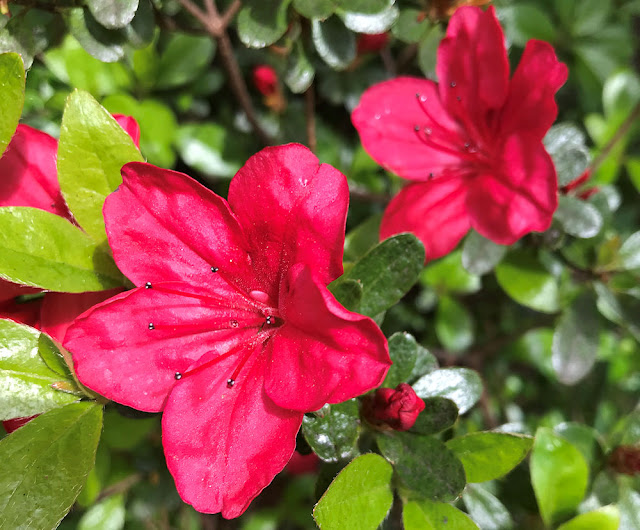 Not much other information except that its scientific name is Rhododendron indicum.  I love its pretty red color. 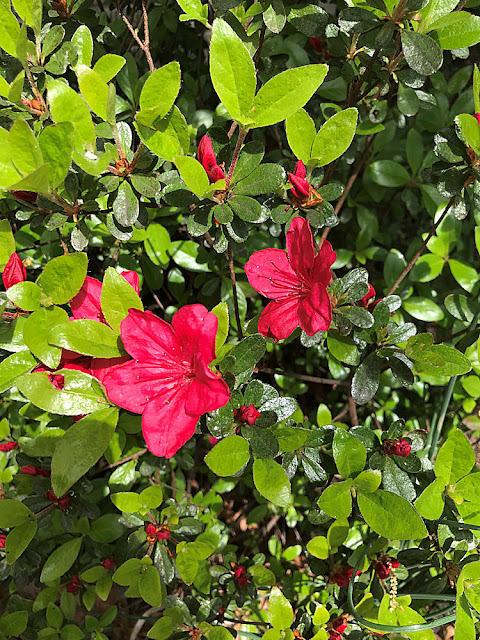 The following pretty white flower bloomed for the first time this year.  We didn't plant it, it just appeared.  It is called Black Haw, a species of Viburnum.  Also known as Blackhaw Viburnum, Stag Bush or Sweet Haw. 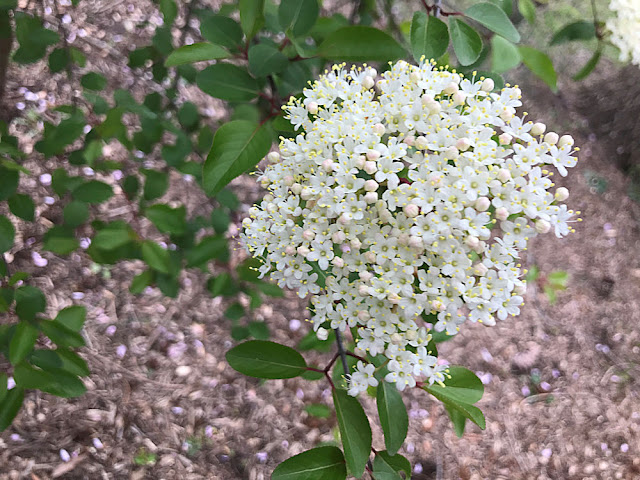 On the ground underneath is a carpet of pink blossom petals from a neighbor's tree. 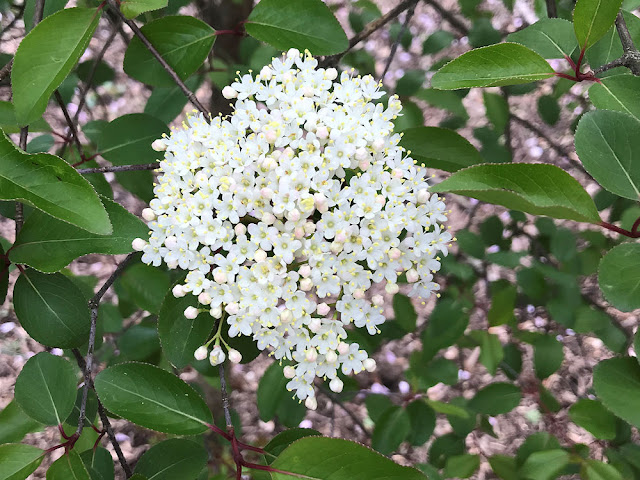 I loved its pretty white blooms. 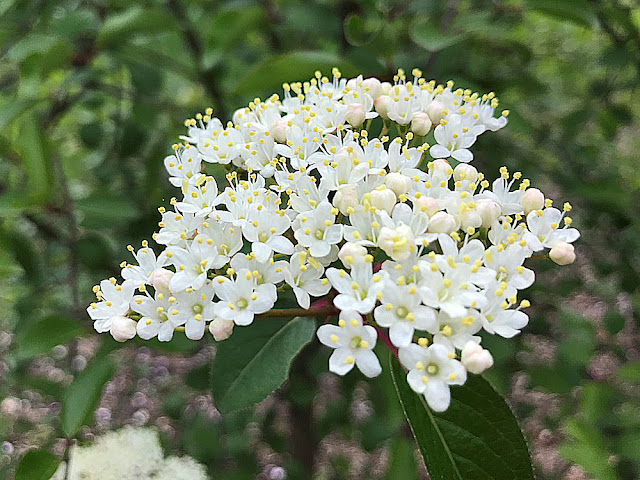 Its botanical name is Viburnum prunifolium. 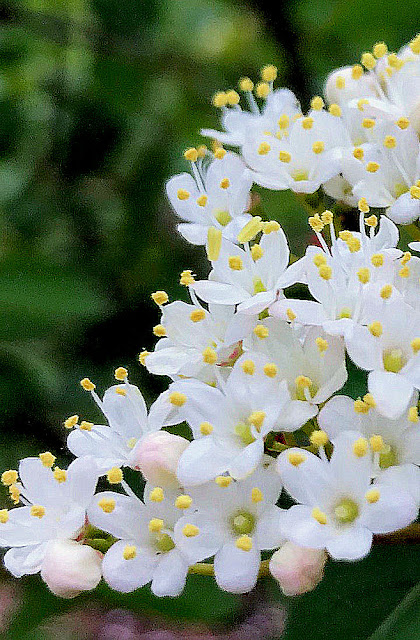 This holly tree has been here since we moved in.  We get it trimmed every year and it is way above our heads now. 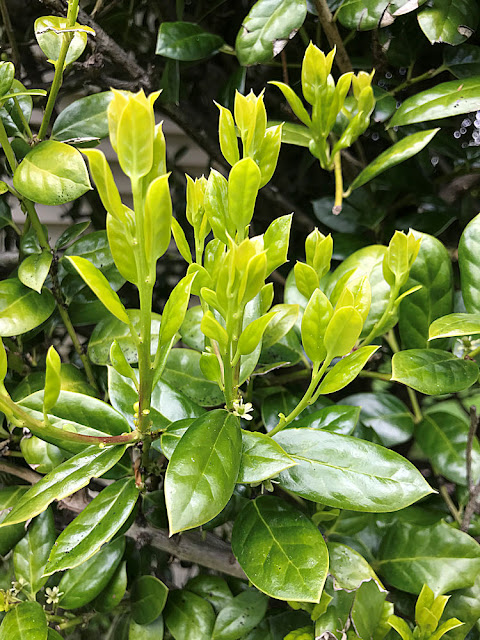 The plant app says it is Chinese Holly, also known as Horned Holly or Burford Holly, and its botanical name is Ilex cornuta. 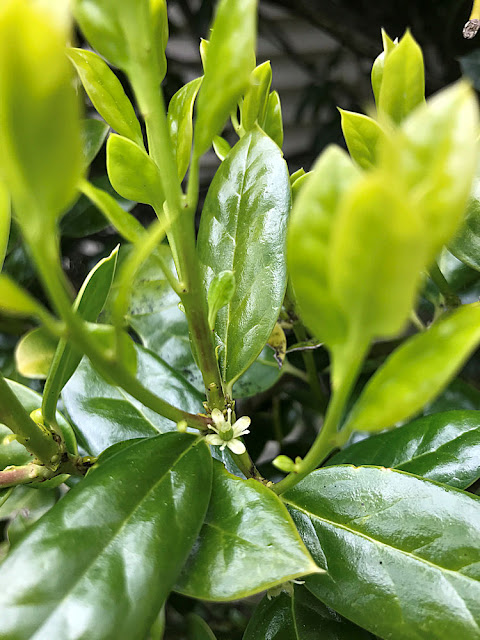 Two collages to add, one of the flowers in the back... 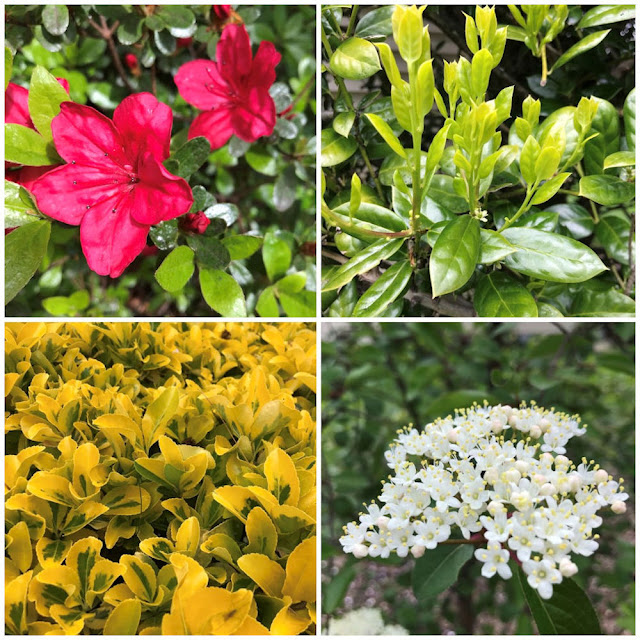 and the pink Azaleas are blooming in the front garden. 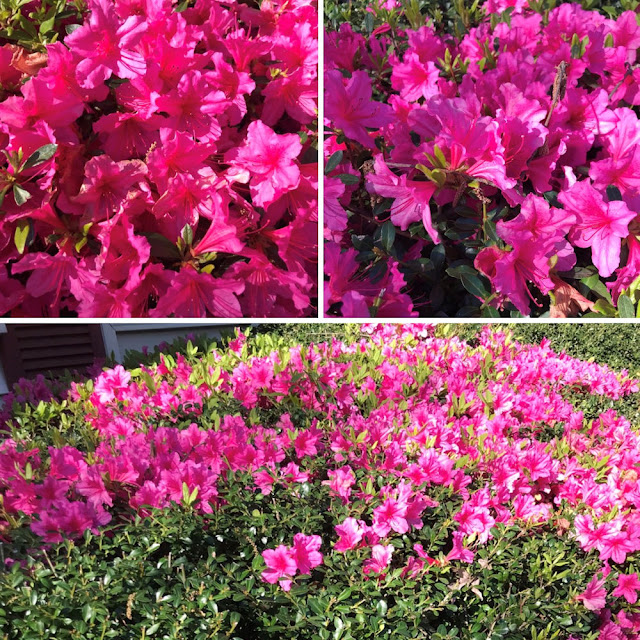 We decided to sit out on the deck for a while, knowing that it wouldn't be for a long time as the hour was getting late. It was still too chilly, but we felt the need for some Vitamin D and at least the sun was still shining. 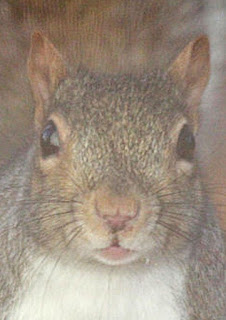 We were late giving our backyard wildlife birdseed, mostly sunflower seeds as we are running low.  I sat waiting for Gregg to join me when a squirrel ran helter-skelter down the branch used to jump onto the rail of our deck.  When he realized I was there he stopped as though he had hit an invisible wall.  I got the full, head-on glare as he chirped and chattered furiously, staring me down with tail flashing in that squirrel way of agitation. I know I got the royal telling off for being there.  How dare I!  After letting me know in no uncertain terms what he thought of me, he headed back up the tree and went round the other side.  I pointed him out to Gregg and we both looked up amused.  We could see where he had perched to wait us out, barely making out the tip of his tail.  No sooner had we closed the sliding door behind us, he - or she - scrambled down and made a feast of those favored sunflower seeds, probably still muttering under its breath for making the wait far too long.  Our back yard friends have trained us well.


Thanks for visiting.  I do hope your days are enjoyable and passing quickly.