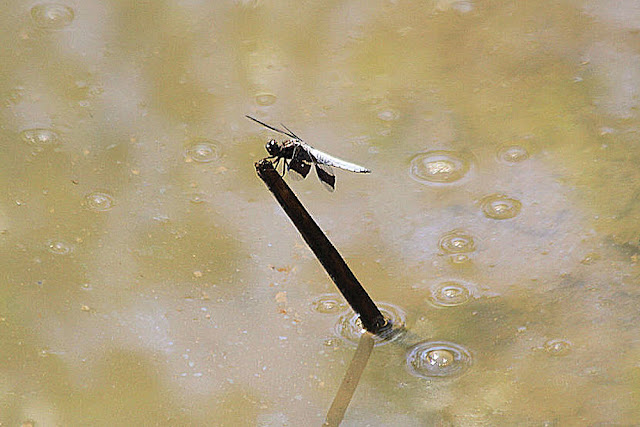 It was a very hot and humid day (August 2nd, 2017).  I didn't see any turtles sunning themselves on logs, a couple of snappers swimming but that was it.  There were no frog sightings either, though they were heard, quite loudly.  Lots of Great Blue Herons (unusually so, no Canada Geese), an Osprey sitting in a tree, one solitary duck, the baby Red-winged blackbird (this post), a few more birds far too fast for my reaction time, a deer, a few fluttery things, and lots of dragonflies. 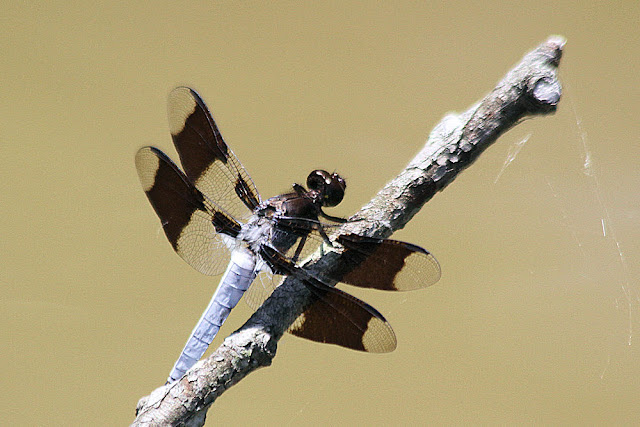 There was a little green and black dragonfly I had never seen before.  It had pretty markings.  I was getting ready to take a picture with my zoom, when a much larger dragonfly scooped him up out of the air and flew off with it clutched tightly.  It was gone in the blink of an eye.  No way that poor thing got away.  I was so surprised my mouth dropped open. I didn't know, or I had forgotten, that dragonflies were carnivorous.  I need to do a refresher on my dragonflies. 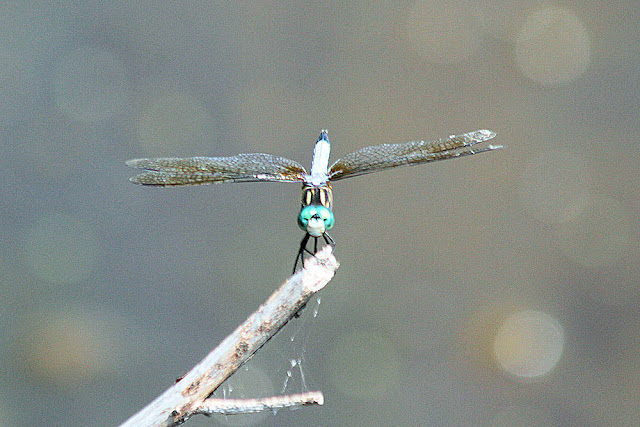 Gregg took all these photos of them. 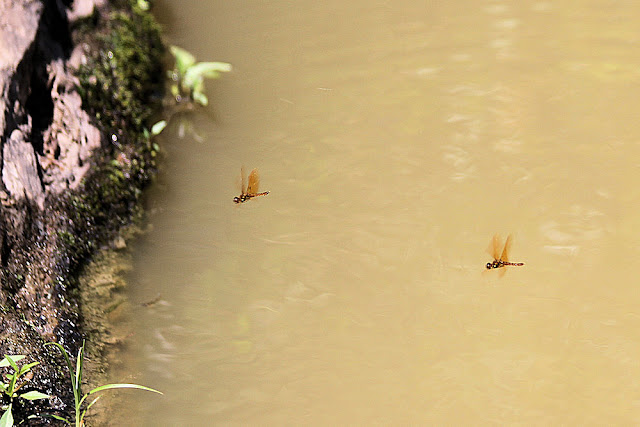 This big old snapping turtle was some distance away. 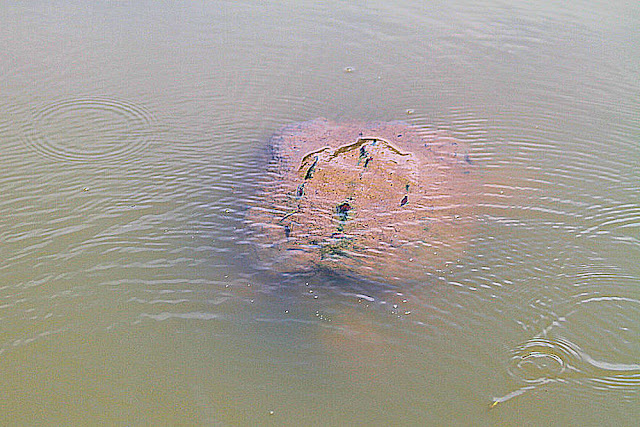 There was another not too far from it. 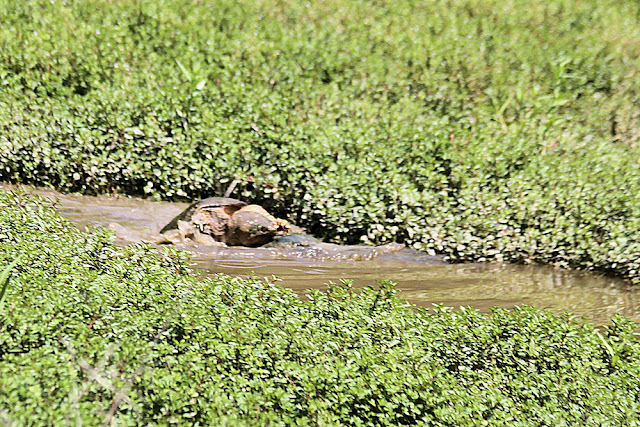 We were happy to see a deer in the distance. 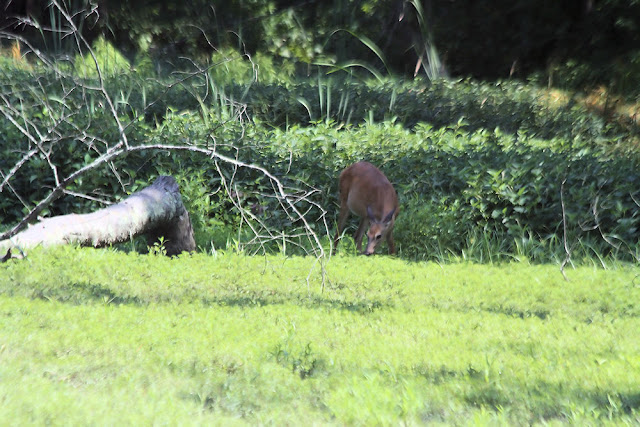 It has been a very long time since we saw one on our visits, and was surprised to see her out. 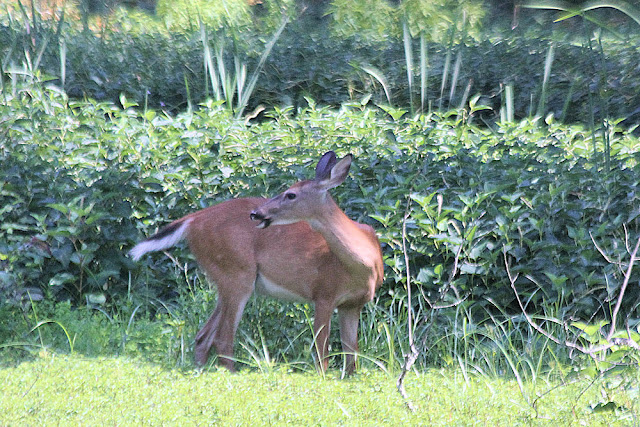 Usually we try to either go earlier or later but today we turned up mid-day. 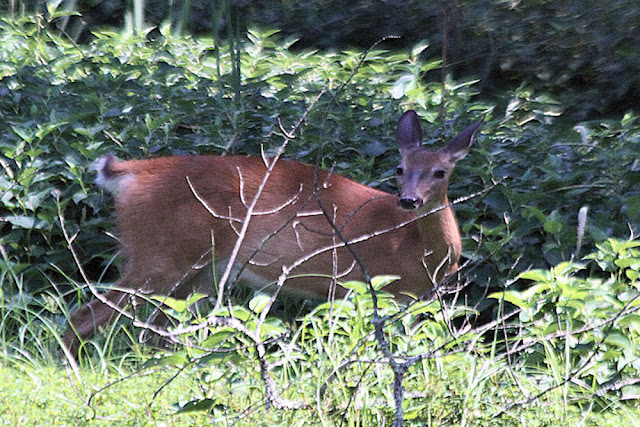 In the distance we strained our eyes to see a large bird sitting on a tree branch.  At first we thought it was a Bald Eagle. 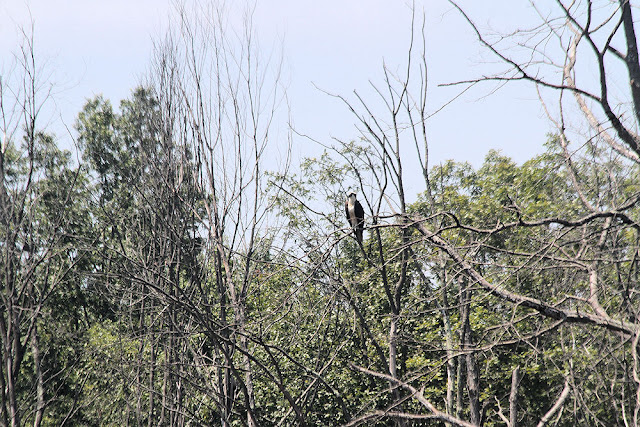 Not a Bald Eagle but a very handsome looking Osprey. 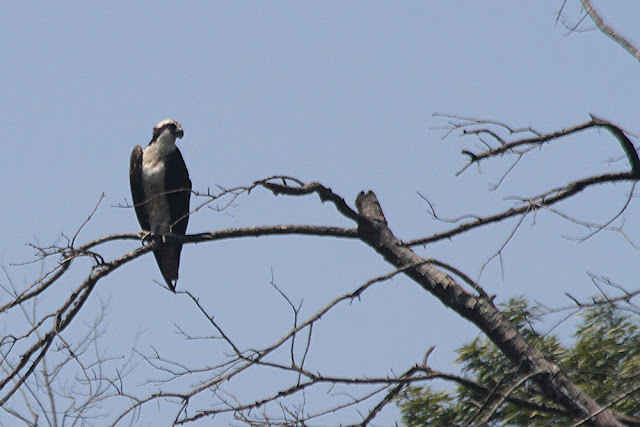 I couldn't make out what this little duck was.  He was also a long way off. 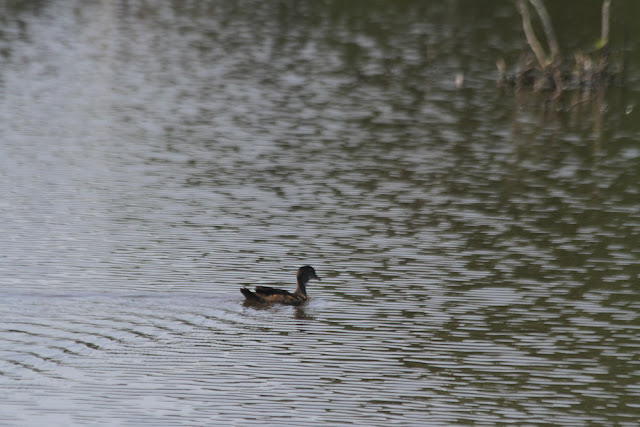 I cropped the photo as much as I could. 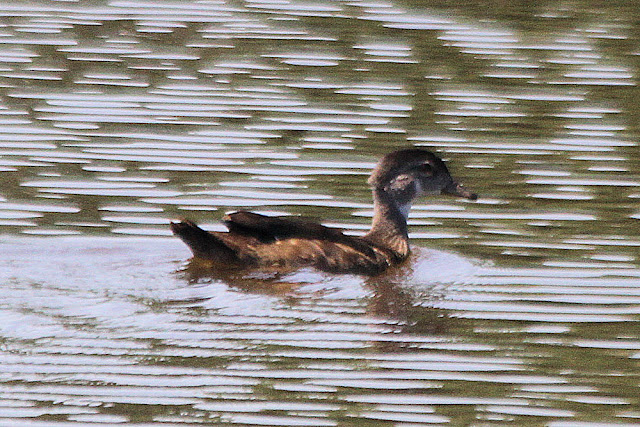 Here are those fluttery things on button bushes. 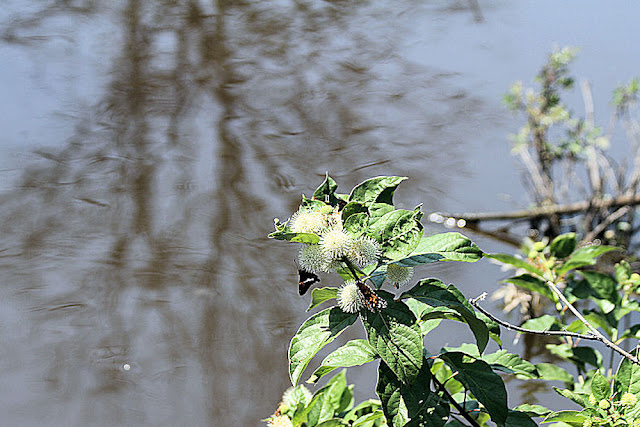 The button bushes were covered in them. 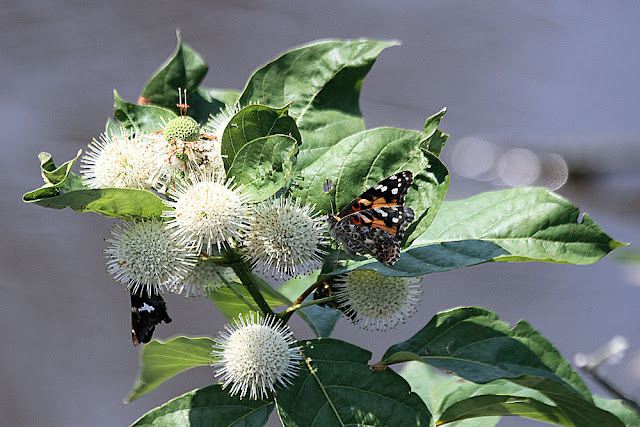 A fritillary and two silver spotted skippers on this one. 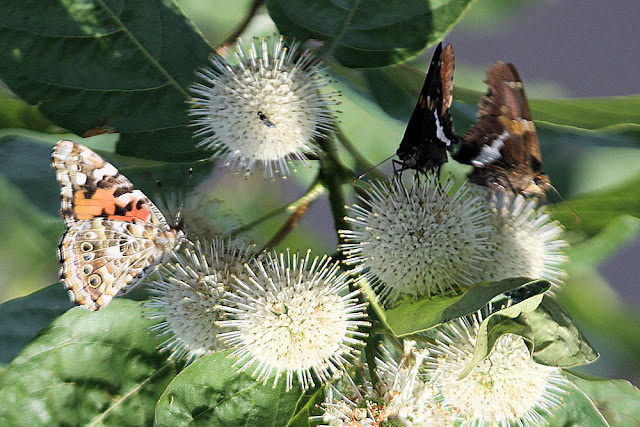 And then there were those beautiful Great Blue Herons.  I took lots of photos of them.  I will finish up with a few here and share more in a later post. 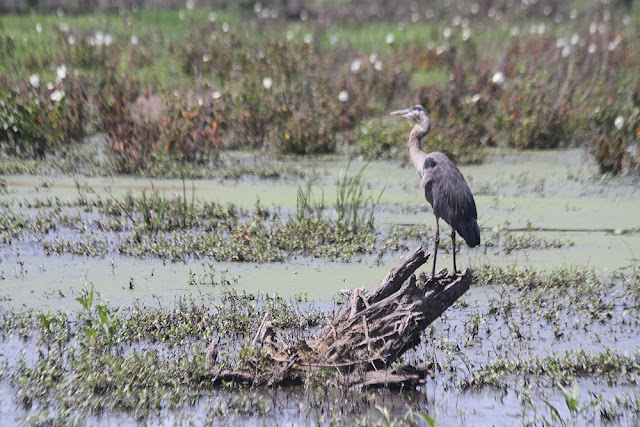 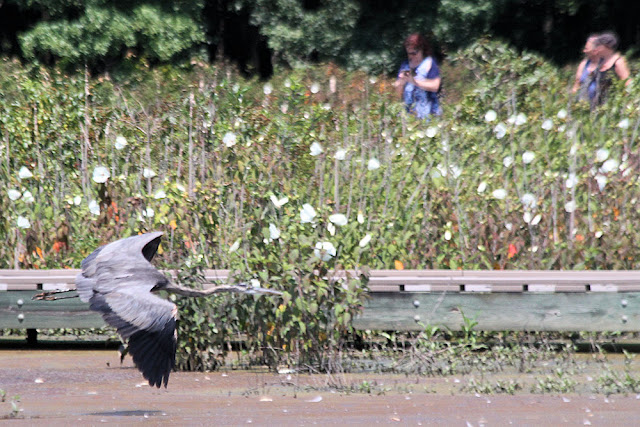 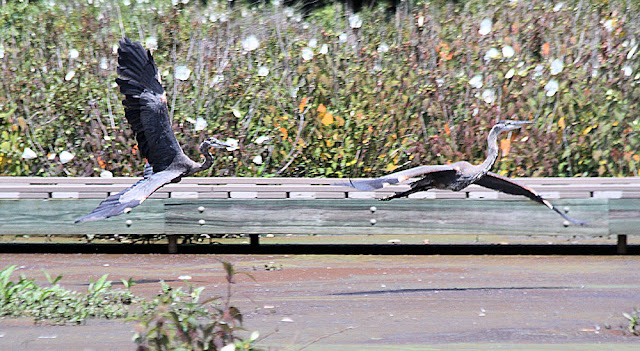 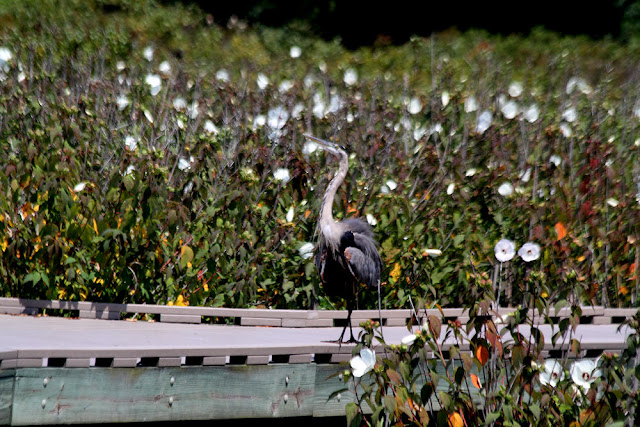 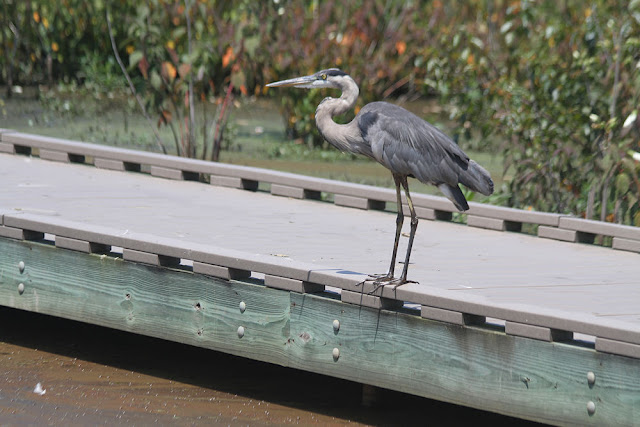 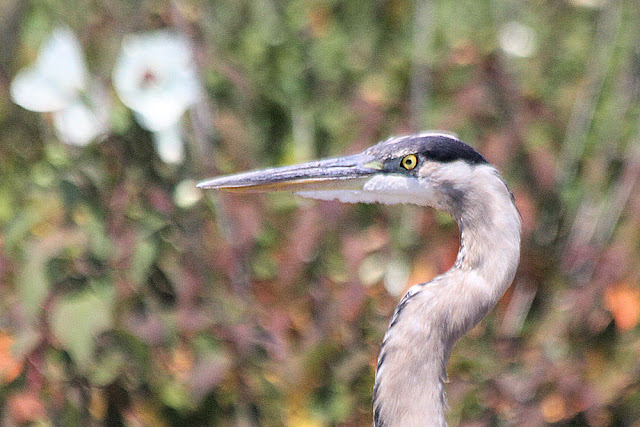 I am already looking forward to going back.  Every time we do there is always something new to see. 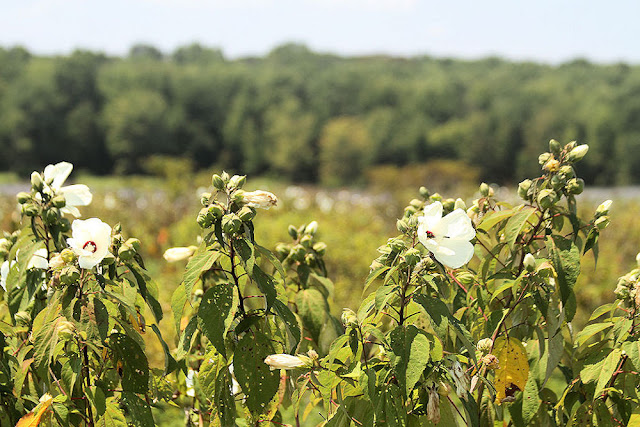