Going back a year we were at Huntley Meadows....

in fact a year ago to the day we found ourselves with snow.  (This is a post I didn't get to publish at the time.)  Well, I said no more snow pictures but I forgot about this.  There will be a post soon from a trip we took to the same place on Saturday, March 12th, 2016, last weekend.  A more temperate kind of a day, cloudy but in the low 60s.  It was a great day for a walk and I will be sharing those photos soon.  But first....

We love our time at Huntley Meadows.  It had snowed and we awoke to see our neighbor across the street clearing his driveway.  However, by the time we stuck our nose outdoors, the sun was shining, the temperature was warmer and we couldn't waste our day. It got up to 50 degrees.  We still had a lot of snow on the ground, but it was melting fast.  I walked around to the back garden (photo below) and took a couple of shots before it disappeared entirely.  I liked how all the shadows from the tree branches played on the snow. 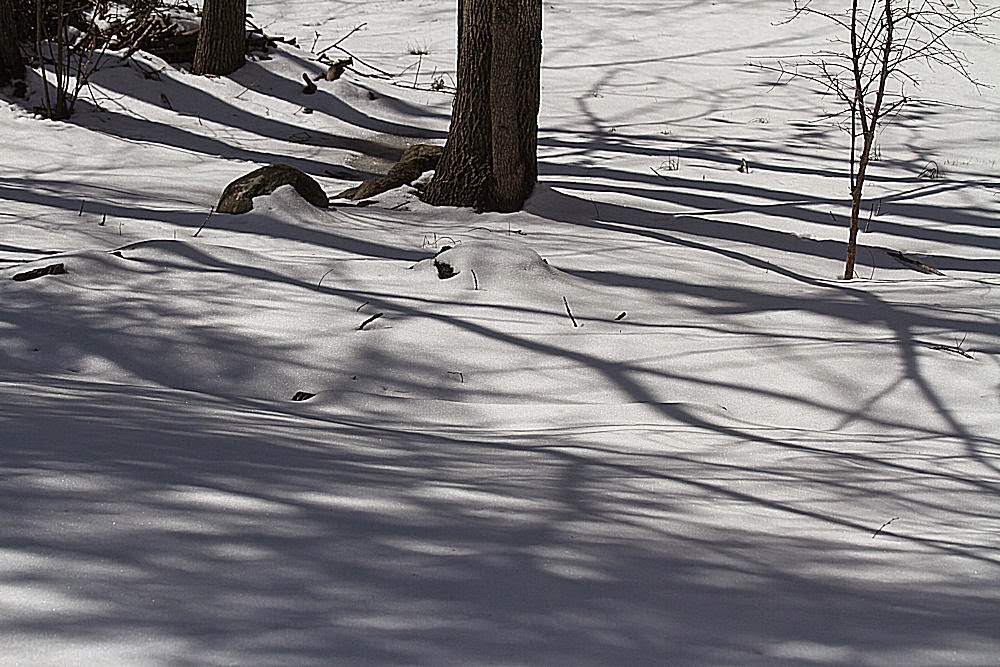 And then we went to Huntley Meadows in Alexandria.  We had to be careful in parts as the pathways were still very icy.  I saw people slipping a couple of times.  Gregg slid once and I slid twice, but we kept our balance and made it there and back to the car okay.  The water was iced over everywhere and little boys were throwing rocks to break it.  It cracked loudly. Boys being boys, I watched one older child step off the boardwalk to test his weight.  Fortunately he had a parent nearby who told him to get back on the path quickly.  As fast as he jumped back, I suspect he heard the ice giving way and had no need to be told twice.  It isn't that deep but he would have gotten a very cold polar bear dip up to his waste. 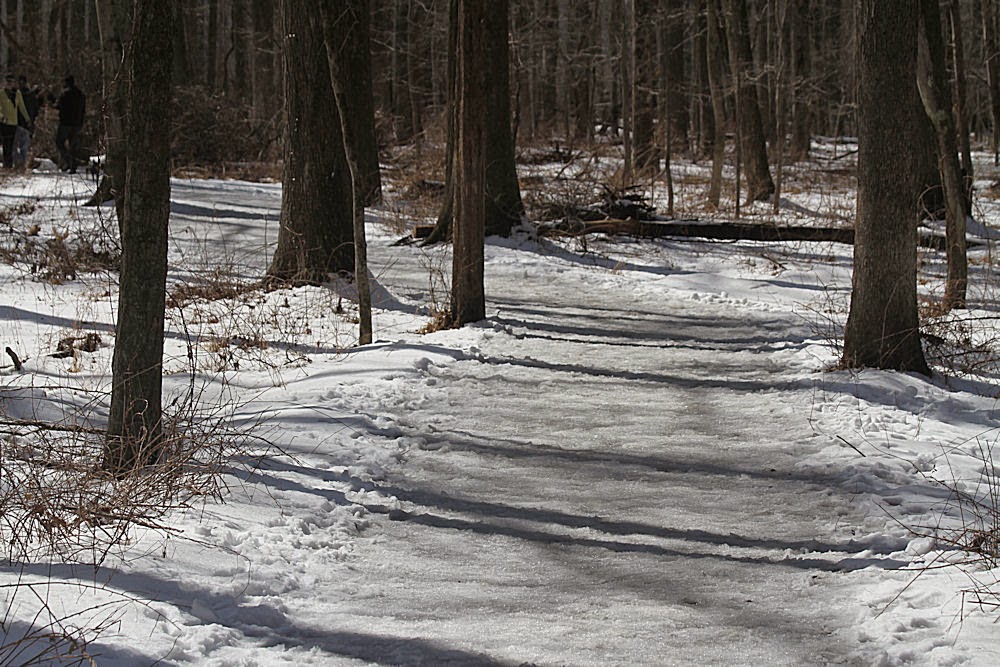 The parking lot was full and there were plenty of parents with two or three children.  There were also several photographers.  We came across one young lady who looked like she was doing her homework, sitting on a bench with her dog next to her.  He jumped off as we approached to check us out, but sensing we were no threat and with a few reassuring words from the young lady, he resumed his original position. 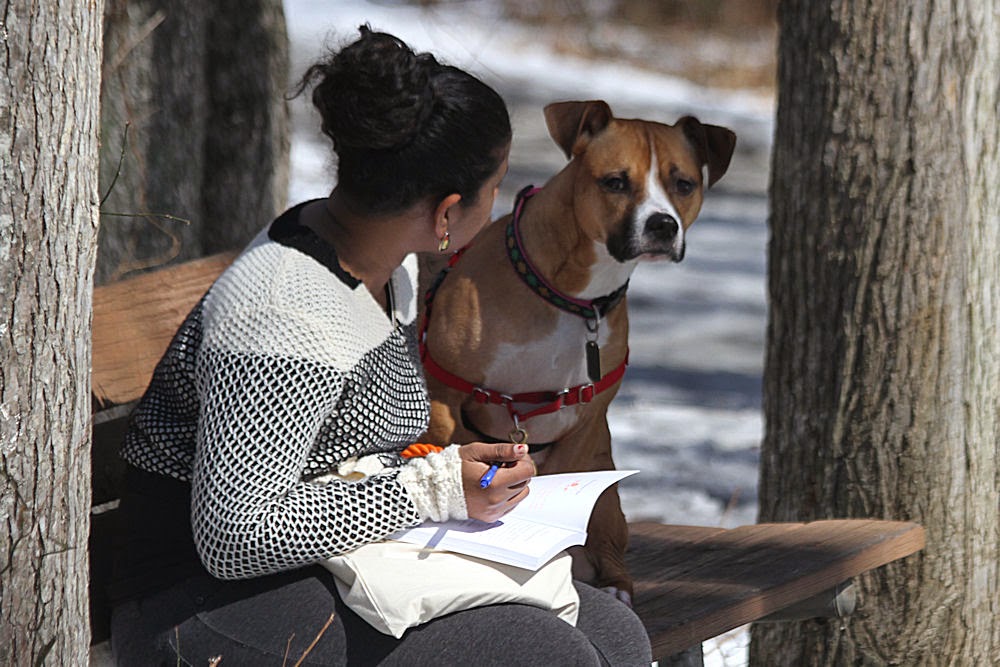 There were couples enjoying the exercise and the better weather.  We saw a small crowd of people looking up into the trees and were curious as to what had caught their attention.  Several pointed to where a Red-bellied woodpecker was hopping up the side of a trunk.  The call was easily identified as his, one I hope I will remember. 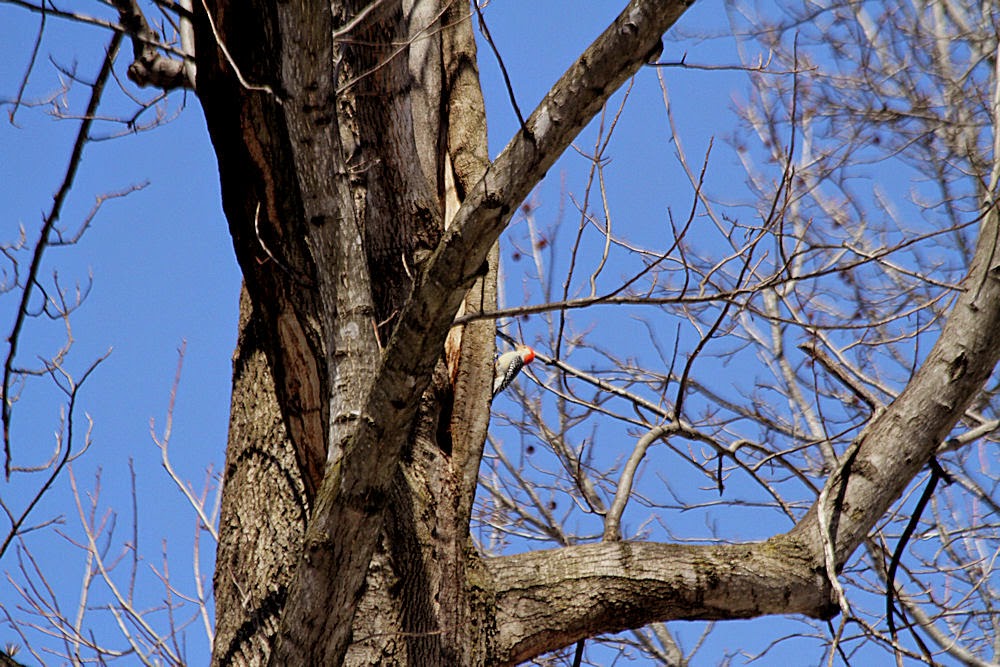 Gregg took these photos of the woodpecker. 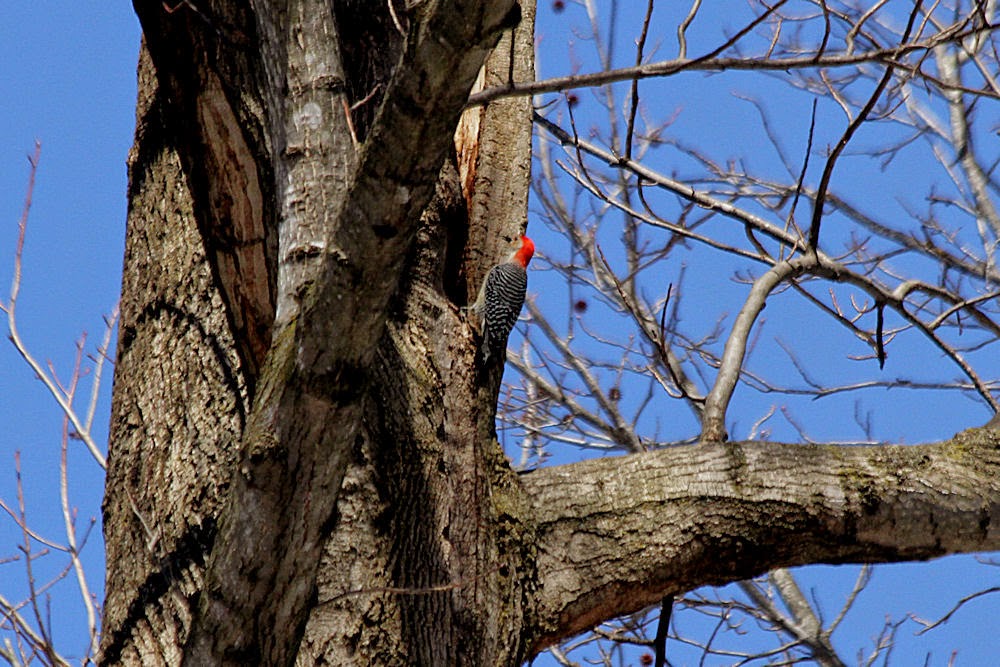 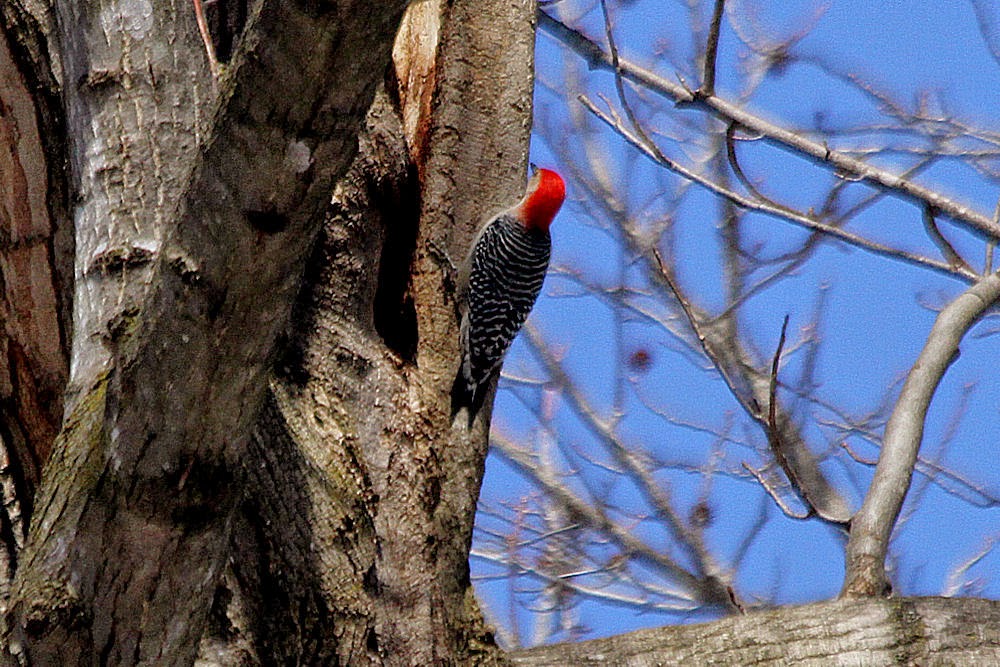 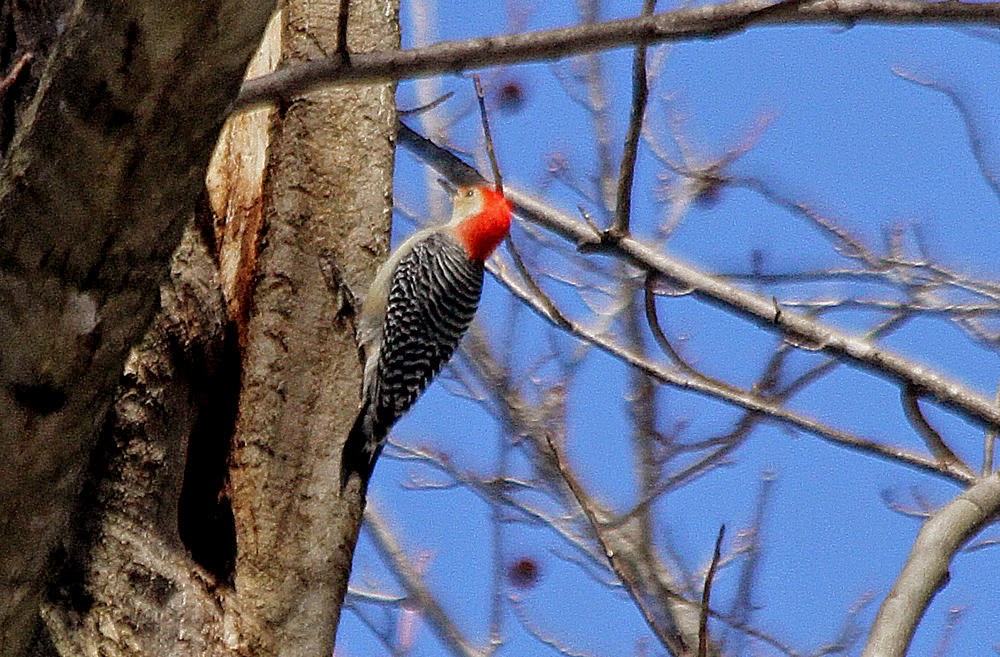 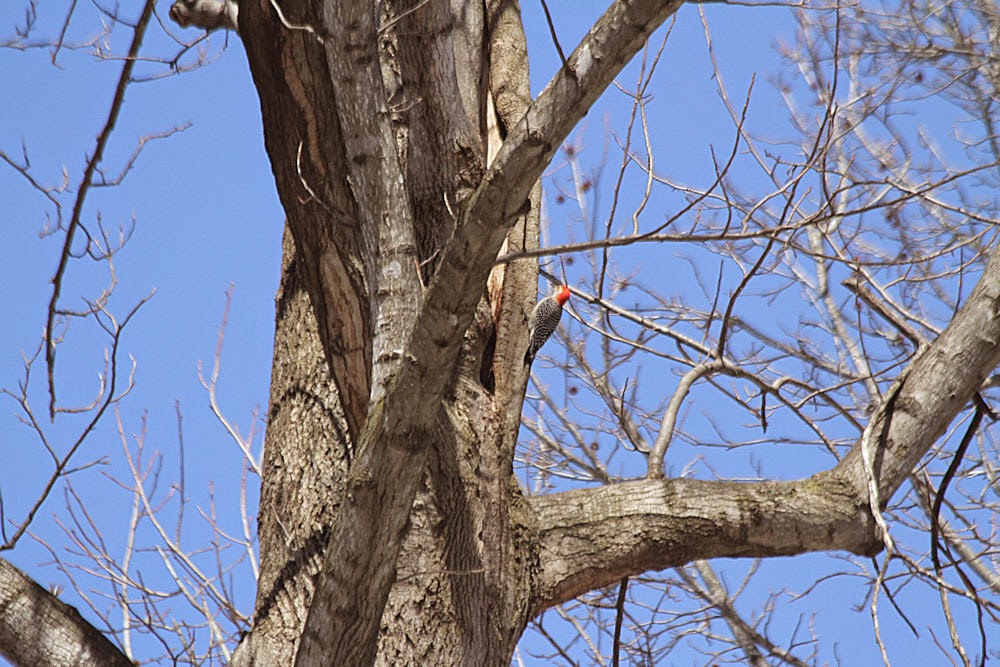 There was a huge gathering of Canada Geese, more than I have ever seen before, several dozen.  I couldn't get them all in this photograph. 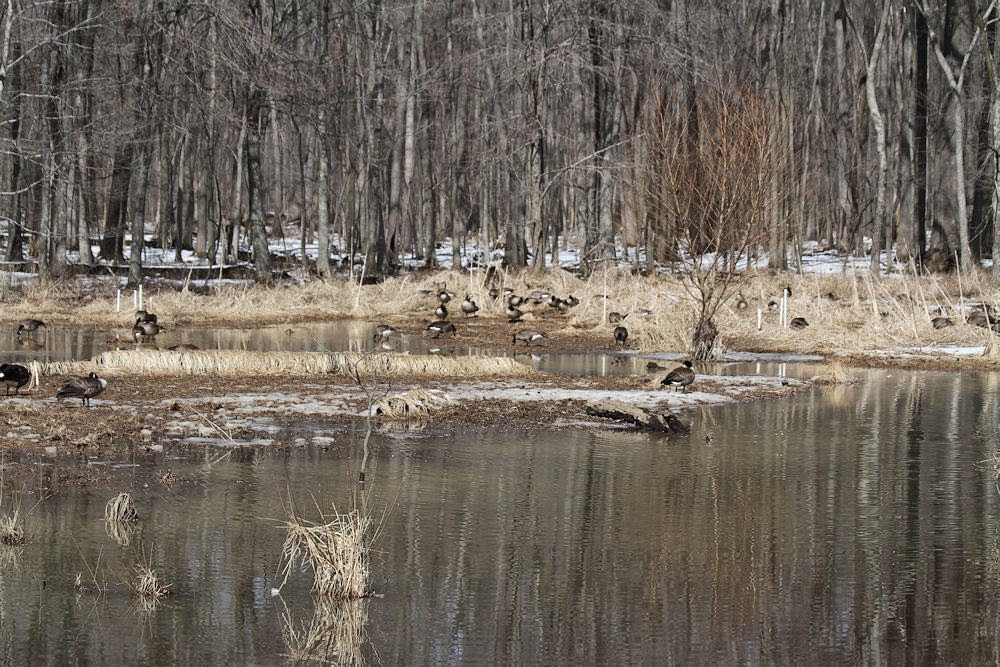 Further along the path a lady was staring at a very large patch of water, and thinking she had seen another frog or other wildlife, I asked what she was looking at.  Most people are only too happy to share.  She said that she liked to see the patterns the cracked ice had formed, and we stared at those patterns together.  I agreed, they were very interesting and pretty.  We both took photographs and shared info on our camera equipment.  She had some we didn't know about and explained what they were.  Photographers always seem to be very generous with their time, and only too willing to pass along information, not only on camera info but places where they have seen wildlife. 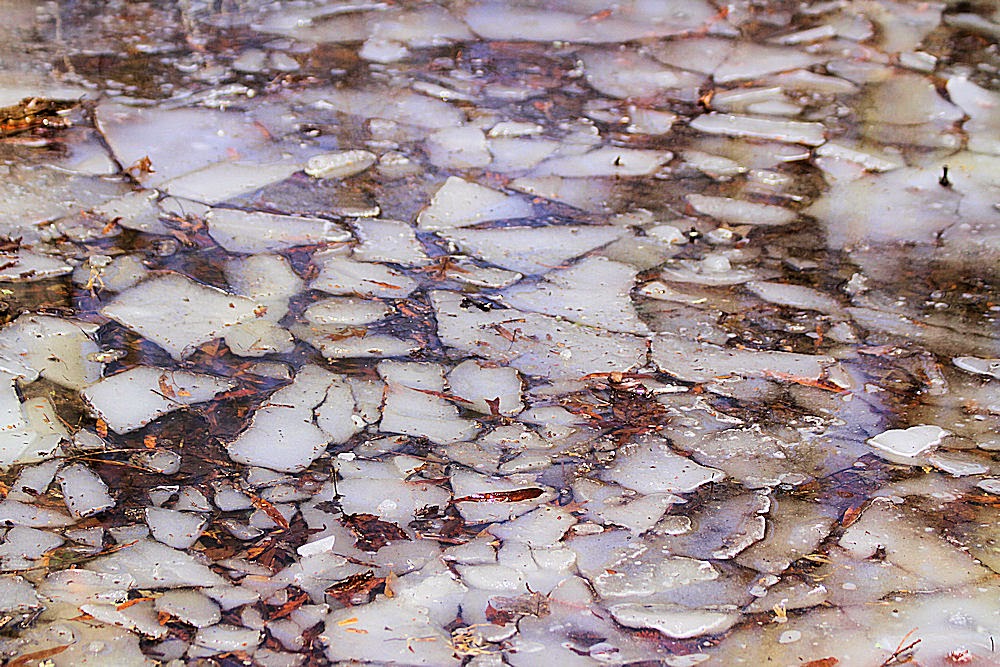 A father and son had stopped to look at a frog climbing out of the water, onto dried reeds that had fallen sideways. 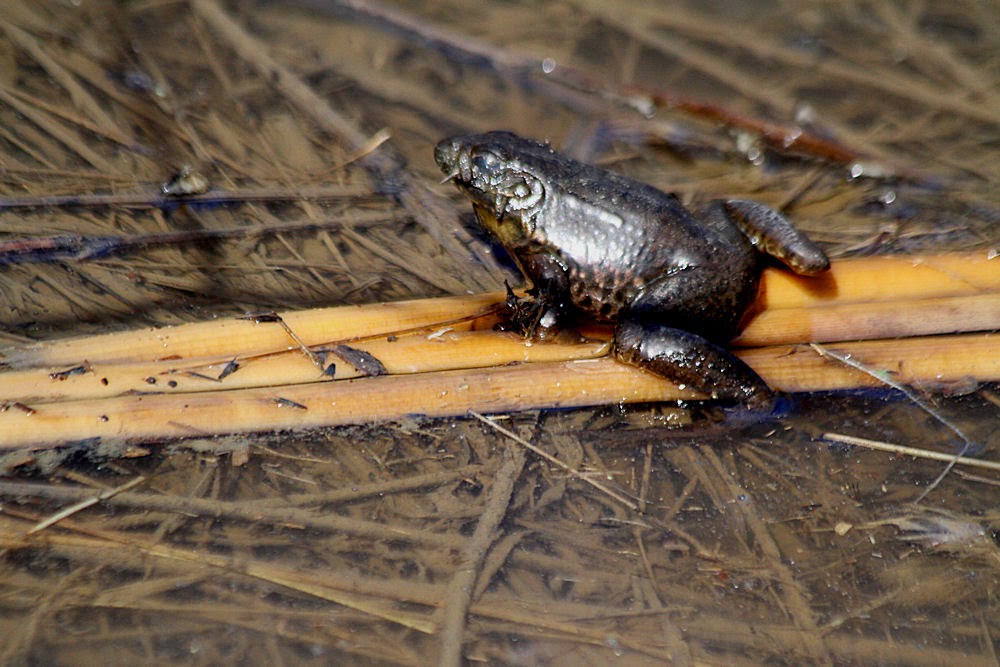 It made it finally and settled down to sun itself. 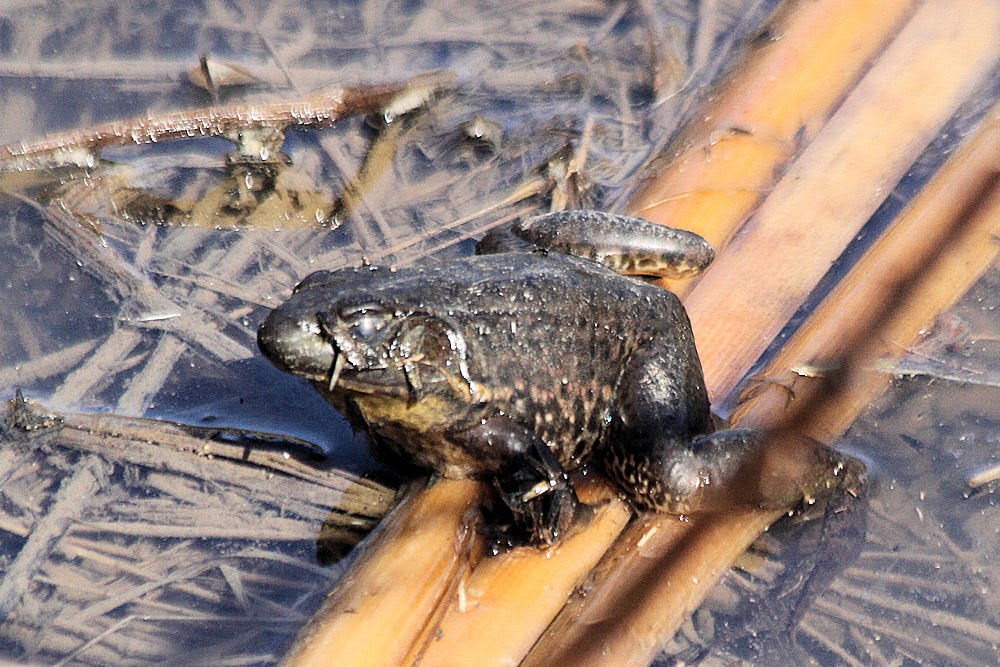 It was a lovely day for a walk and by the time we arrived at the park, the sky was a perfect blue with a few wispy clouds and contrails. 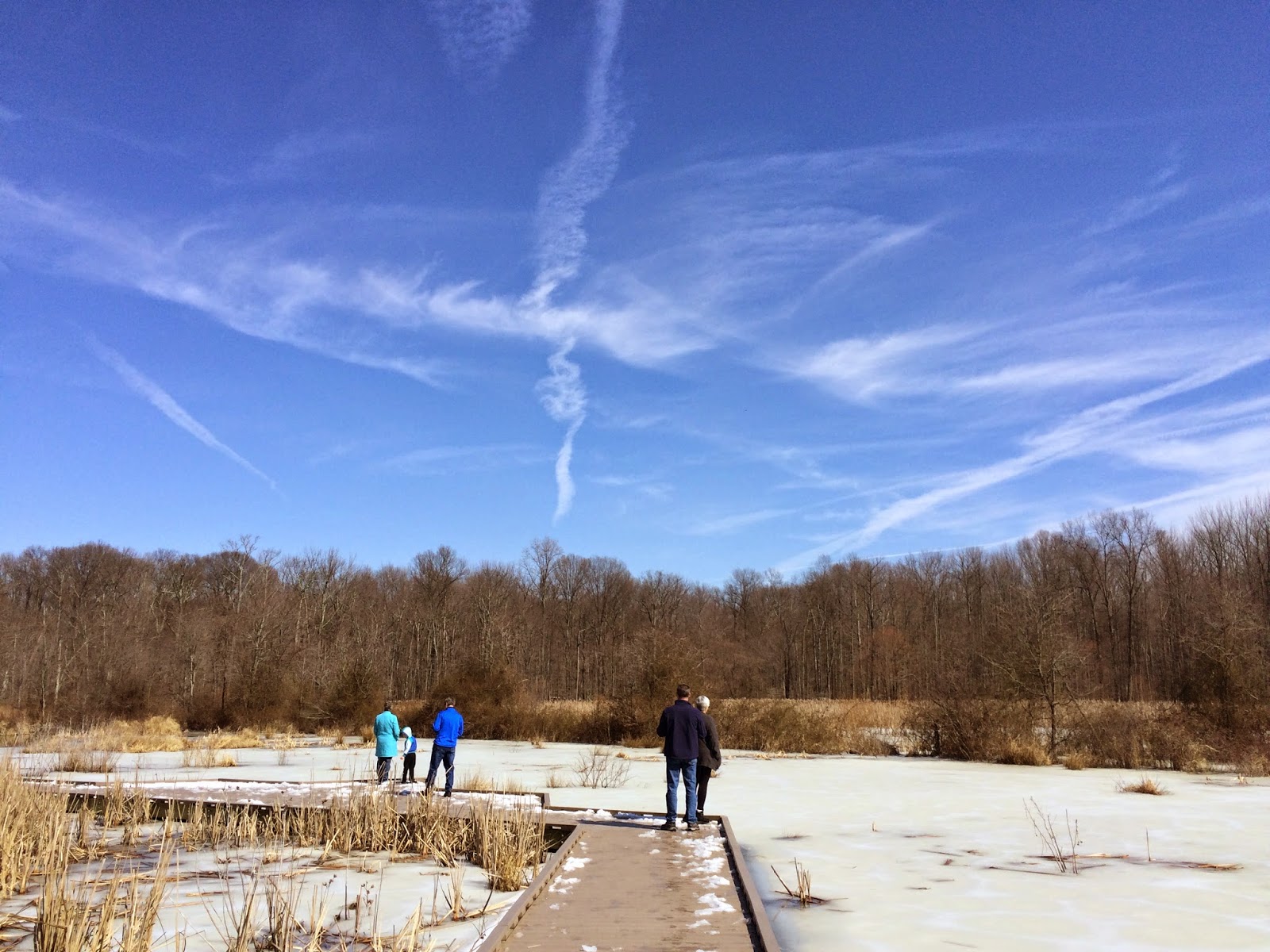 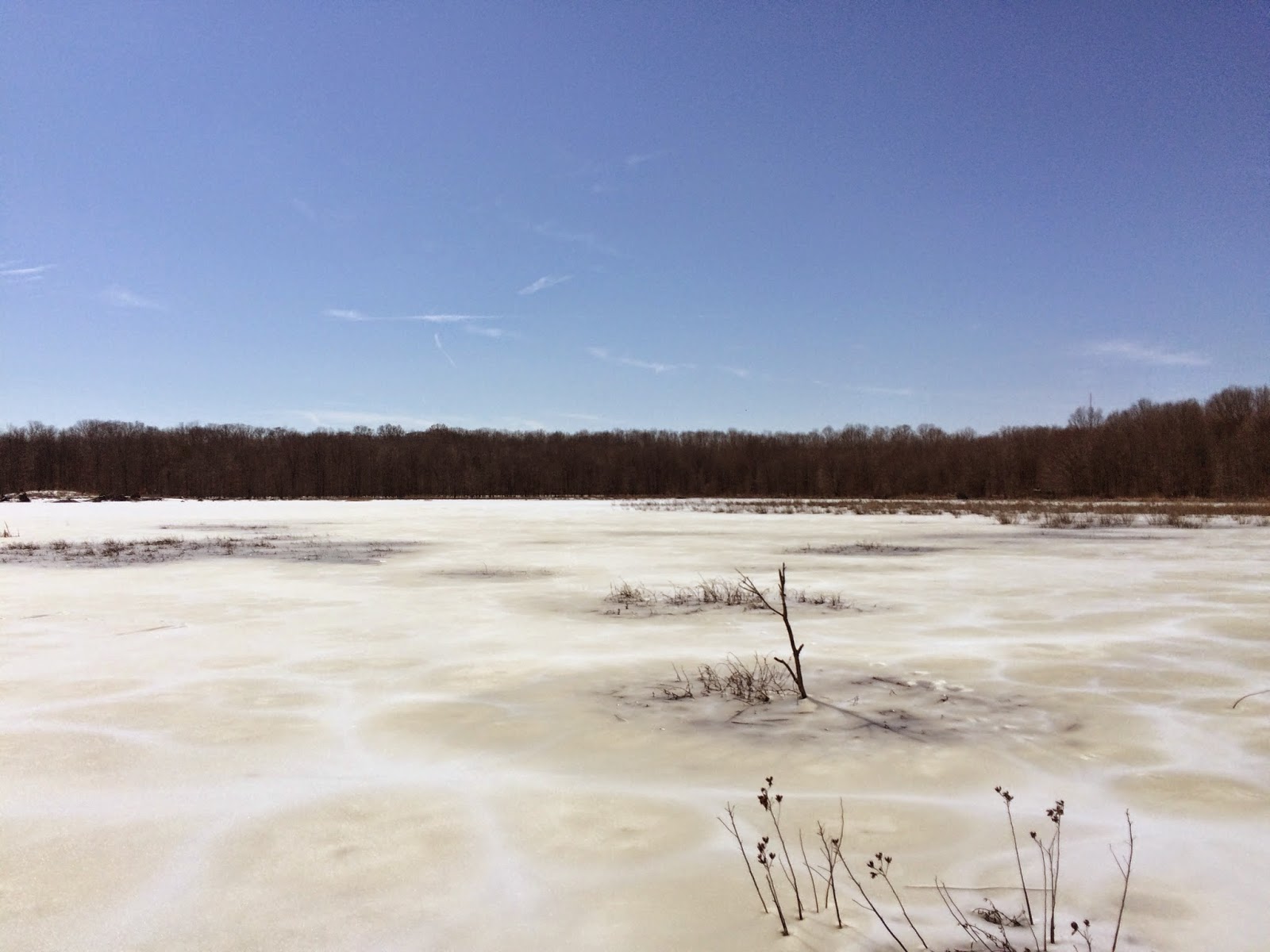 Gregg pointed out these interesting patterns on the surface of the ice. 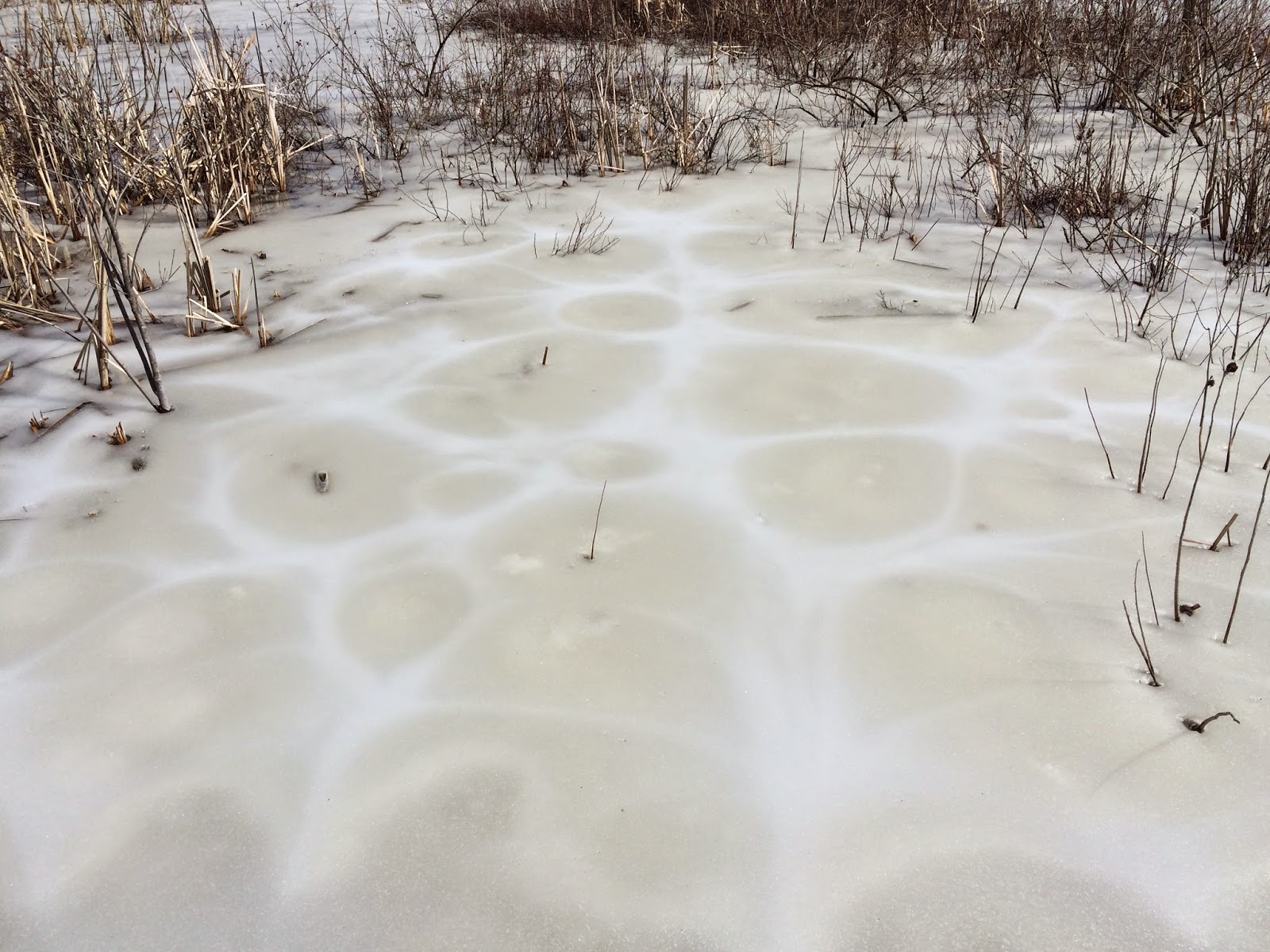 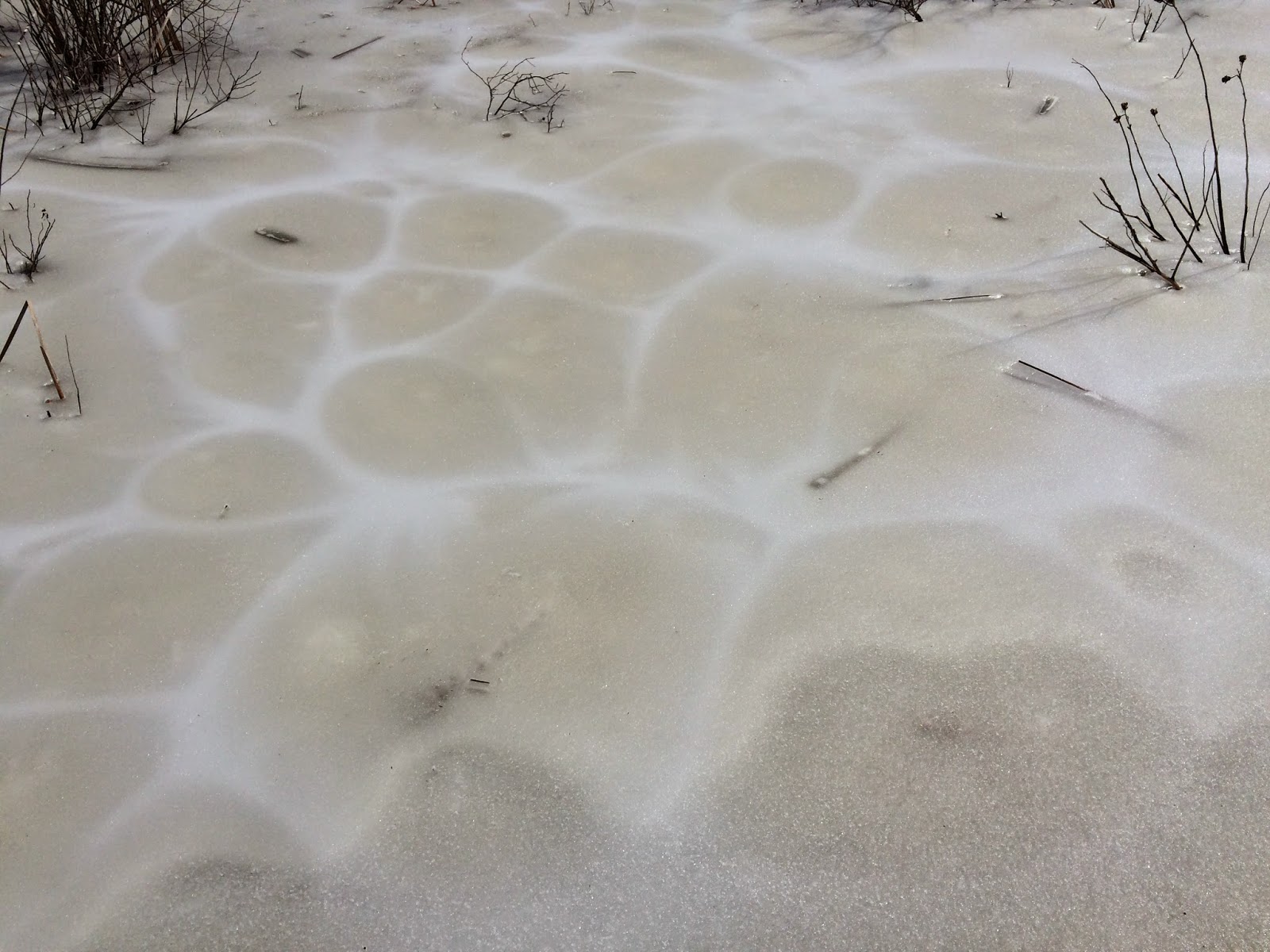 I practiced taking a few landscapes with my iPhone.

along with other things that took my interest. 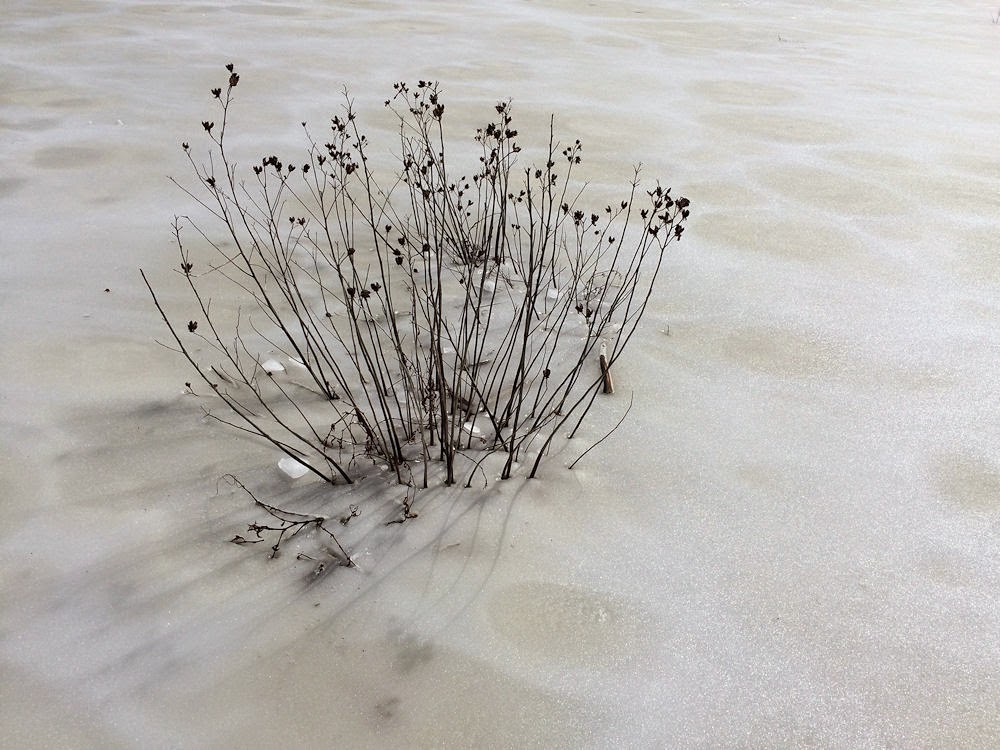 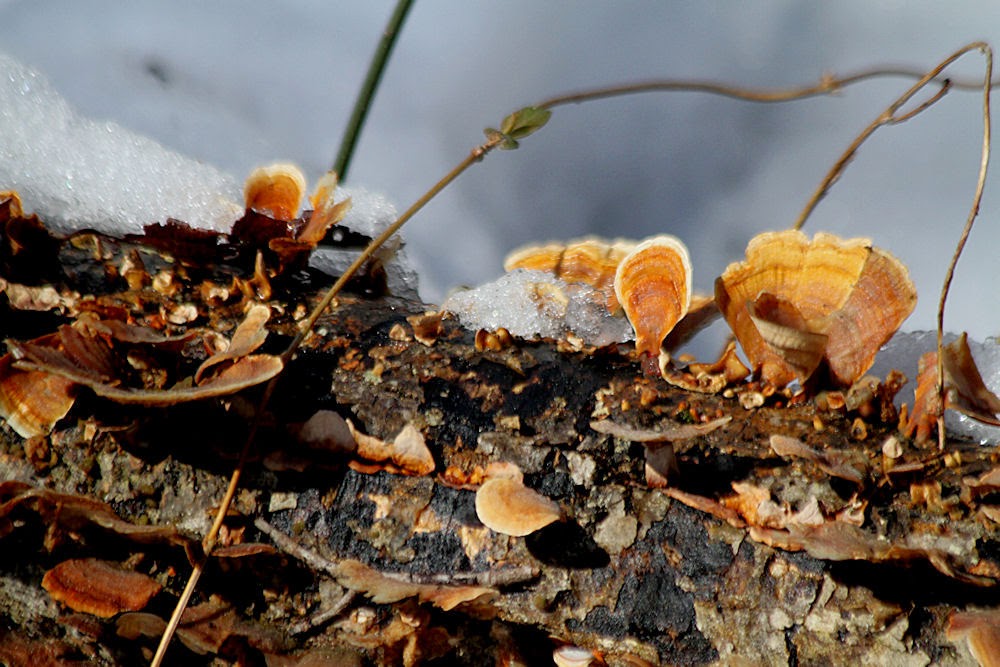 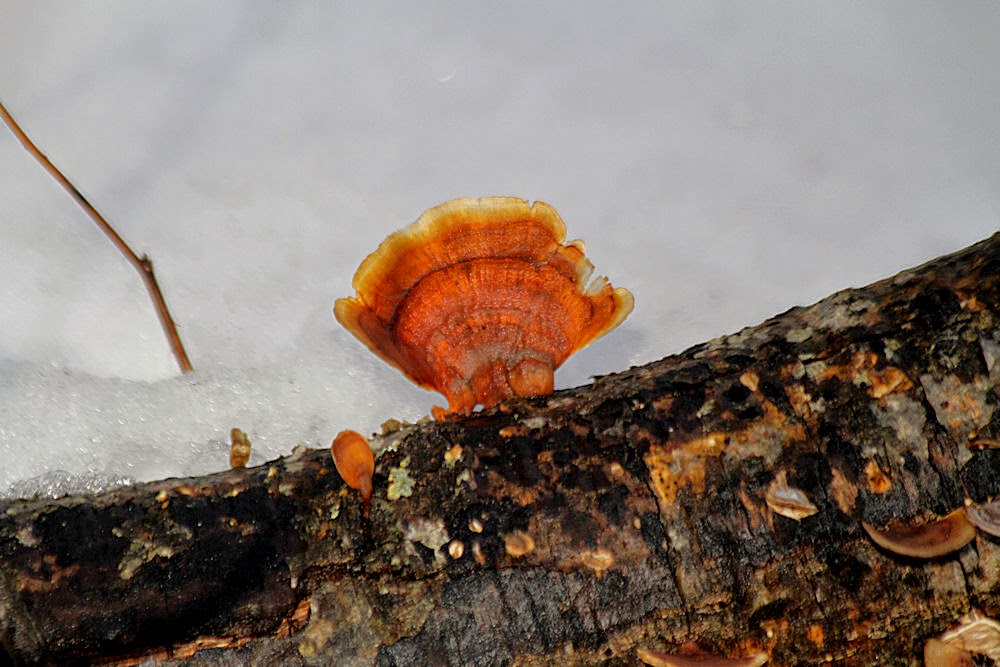 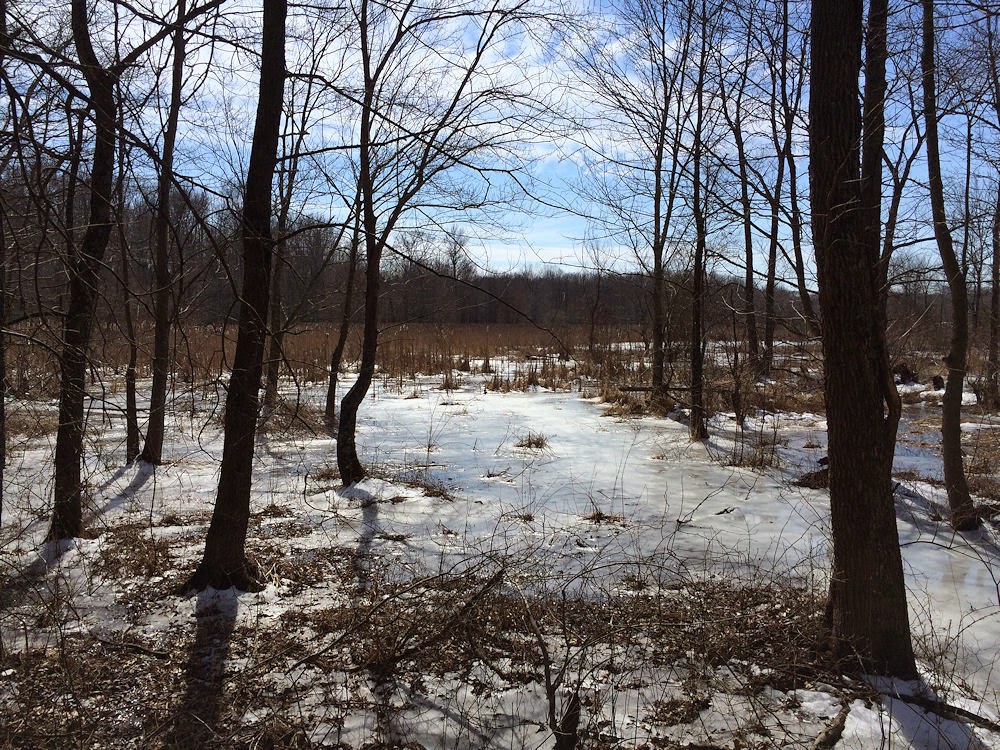 This was the last photo from our walk around Huntley Meadows that day, more shadows of tree branches on snow.  This park is easily enjoyed in all seasons. 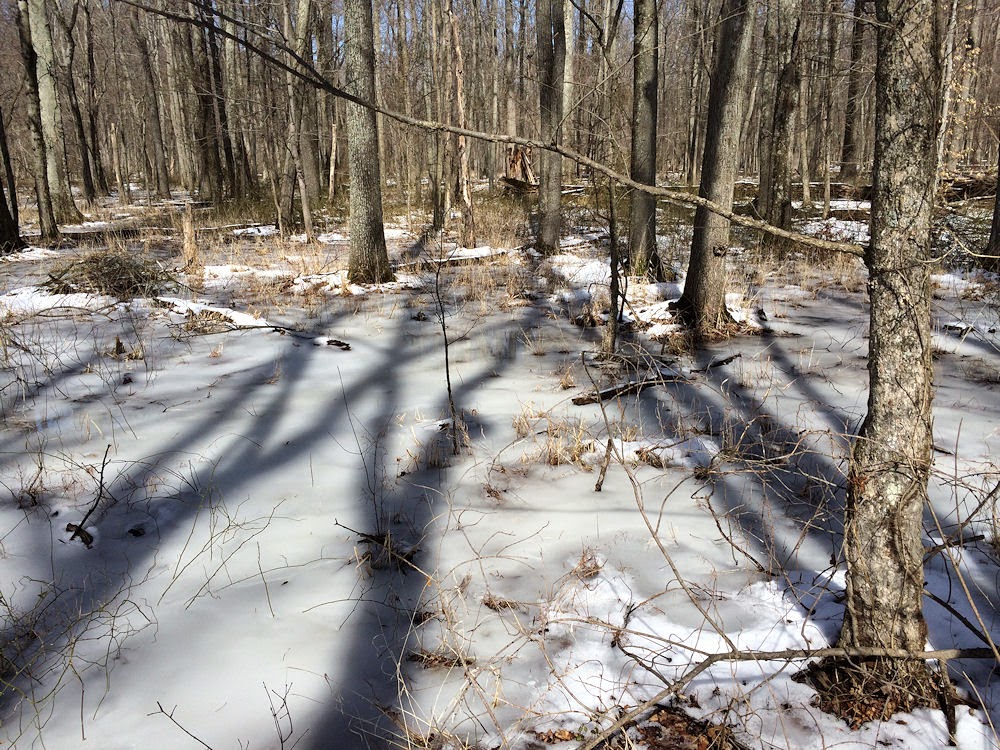