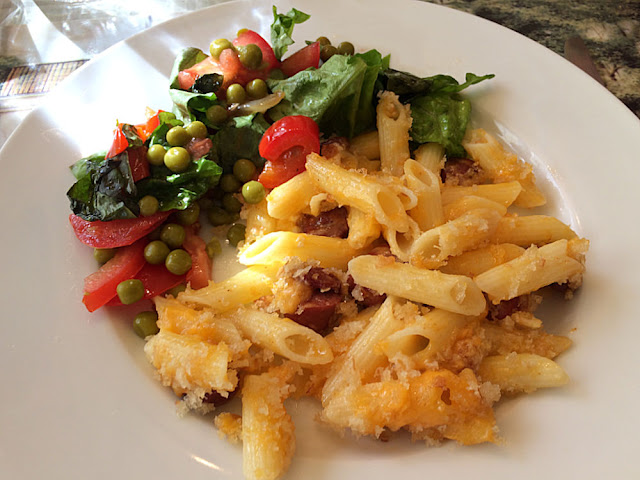 This should say Penne and Cheese as when I went to look for a box of elbow macaroni in the pantry, all I came out with was a 12 oz. box of gluten free Penne pasta.  The 'gluten free' was a surprise as we normally have regular.  I must have picked up the box by mistake.

I felt like I was making this for a child again as I also added sliced hotdogs.  Well, big kids enjoy their hotdogs too.  I asked Gregg, would you like hotdogs for a change a couple of nights ago and there were a few left over, so we tossed them into the pasta.  Talk about getting back in touch with your inner child.  It was so good!

Macaroni and Cheese - 4 to 6 servings

Boil the Penne in salted water according to package directions.

In the meantime grease a medium sized casserole dish with cooking spray or a little butter.

Saute the sliced hotdogs until they are nice and brown.

When the pasta is ready, drain thoroughly and then put the drained pasta back into the pan you used to cook pasta.  It is usually advised to pour cold water over the top of the drained pasta and then drain again, but I am never patient enough to do this step.

So, now that you have it all back in the pan, mix in the seasoned salt, cayenne pepper and then the grated cheese.  When it is nice and gooey, fold in the sliced hotdogs.

Now you can put the pasta in your casserole dish.

Mix the half cup of milk with the egg and pour that over the top of the pasta.

By this time I have already taken any day old bread, how many slices depends on how big the loaf is (I used three small slices of sourdough this time).  Toss the slices in the blender and press the pulse button until you have relatively fine breadcrumbs.  They don't have to be too fine.  Mix in the melted butter.  Spread the breadcrumbs evenly over the pasta.

Pop in the 350 degree oven and bake for about 25 to 30 minutes, or until nicely browned on the top.

What did we think of our meal?  Comfort food at its best.

We had been out for several hours and wanted something fast to put on the table.  Gregg likes to get in the kitchen, which makes it a lot of fun to put a meal together when there is two of us cutting the work in half.  He cooked the hotdogs while I was putting the casserole ingredients together, and he also made the salad.

Salad was whatever we had on hand: lettuce, leftover peas from yesterday's dinner, diced tomatoes and diced sweet red pepper.  He also grilled some onions in a little olive oil, mixes in the veggies and puts this mixture on top of the lettuce.  It is nice and warm and wilts the lettuce a little.  Very tasty and you don't need to add any extra dressing. I wouldn't alter anything about this meal because it is yummy.

You can alter the veggies for the salad to whatever your favorites may be.

You can leave the hotdogs out or add another preferred meat.

The possibilities are endless.

I didn't use a recipe as this is something I have been putting together for many years, whenever we have wanted some good old fashioned comfort food.  We never seem to cook it the same way twice.