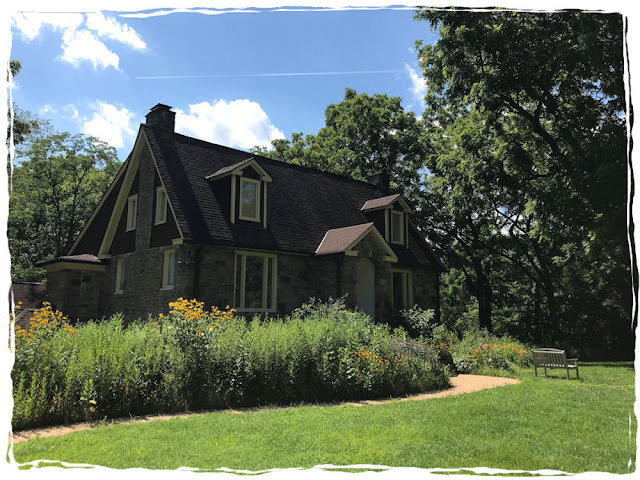 The Walney Visitor Center is a converted 1780 farmhouse. 300,000 visitors a year go to the center, for its educational programs and exhibits.  We often see a group of young children under a shaded area outside, all having a lot of fun judging by the laughter and giggles.  I expect when it gets too hot they go to the classroom inside. 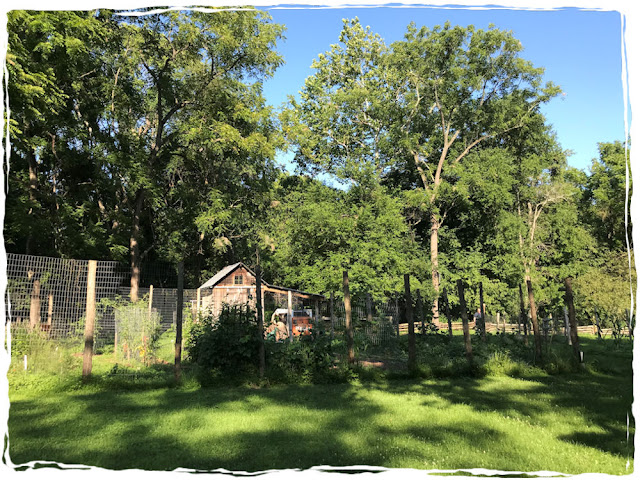 To the left of the visitor center there is a large open area, on one side a fenced off garden and on the other a beehive.  There is an electric fence around the beehive.  When we first started coming here, for many years there was no fence at all, but there were also two beehives.  Maybe the fence was put there to protect them from animals like the fox, raccoon, deer, and maybe bear.  All could be tempted by the honey I suppose.  Back then you could get as close as you wanted to those busy bees.  Using lots of common sense of course.  It is always prudent to keep a distance, but they never bothered us as we walked by, and we never bothered them. 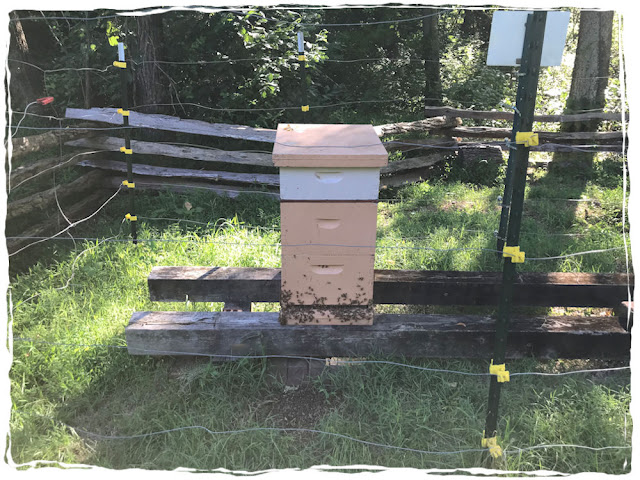 Always fascinating to see all the activity.  I will be sharing more about the garden and the bees in another post eventually.  I took lots of photos on our second visit.  The garden was locked on this day, and as I knew we were coming back I left the bees to themselves. 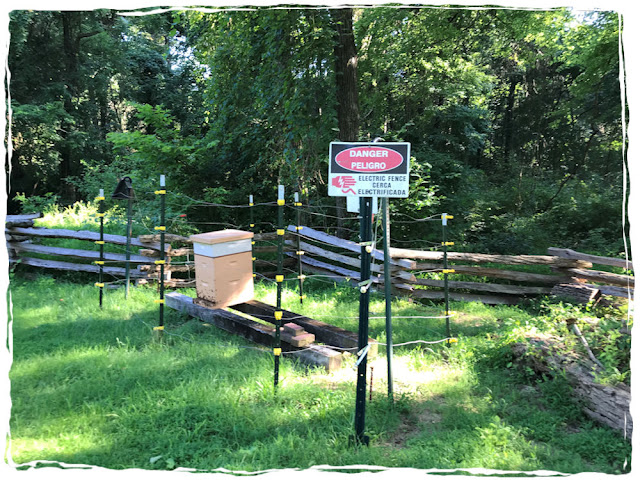 I was surprised and yet very interested to see a small tobacco crop.  You can read all about it here. 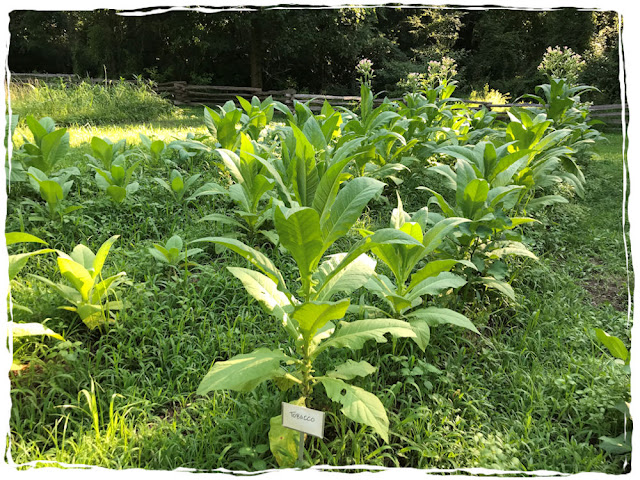 In part it said the plant is indigenous to the island of Hispaniola in the Caribbean, where the Arawak/Taino people were the first to use and cultivate.  In 1560 Jean Nicot de Villemain, then the French ambassador to Portugal, brought tobacco seeds and leaves as a 'wonder drug' to the French Court. 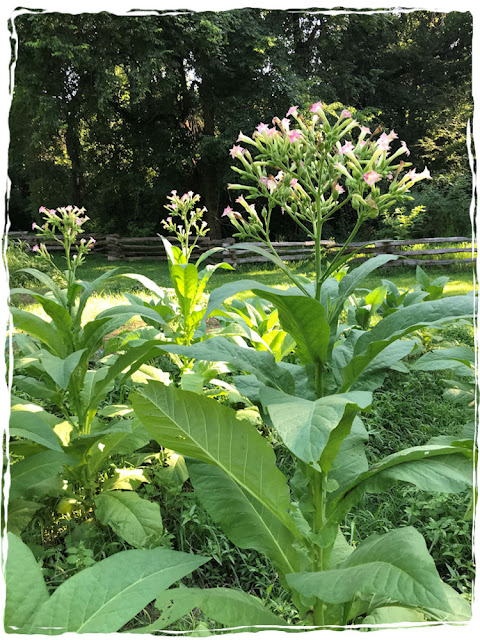 In 1586 the botanist Jaques Dalechamps gave the plant the name of Herba nicotiana, which was also adopted by Linné.  It was considered a decorative plant at first, then a panacea, before it became a common snuff and tobacco plant. 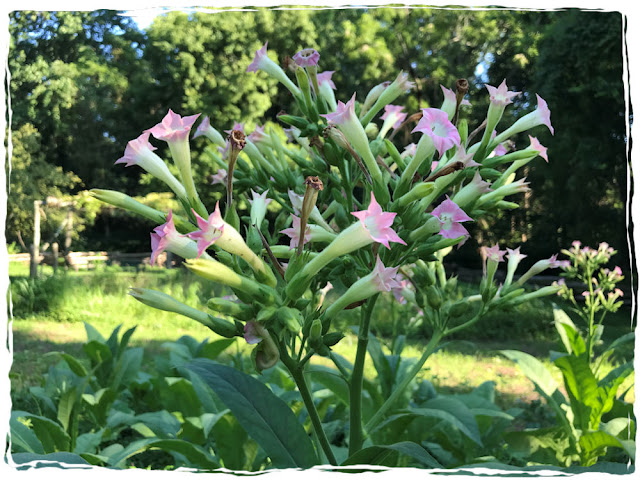 Tobacco arrived in Africa at the beginning of the 17th century.  The leaf extracted was a popular pest control method up to the beginning of the 20th century.  In 1851 the Belgian chemist Jean Stas documented the use of tobacco extracted as a murder poison.  A Belgian Count, Hippolyte Visart de Bocarmé, poisoned his brother-in-law with tobacco leaf extract.  This was in order to acquire some urgently needed money.  It was the first exact proof of alkaloids in forensic medicine. 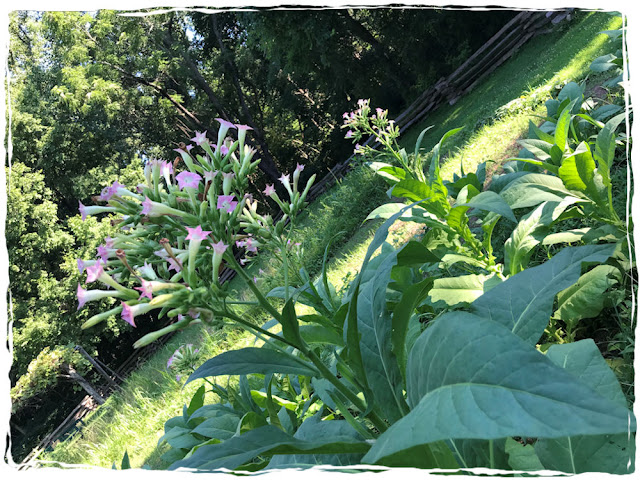 Fascinating and at the same time being well aware of all the health problems people suffer from because of it.  The dreaded weed my parents called it, both of whom were life-long smokers.  When I first got married and we took mini road trips, I remember seeing these very tall barns that looked odd to any other barn I had ever seen.  I was told that they were for hanging and drying tobacco leaves. If you go to this website called World Atlas, it will tell you all about it. I was interested to learn tobacco is also grown in China, India and Brazil. 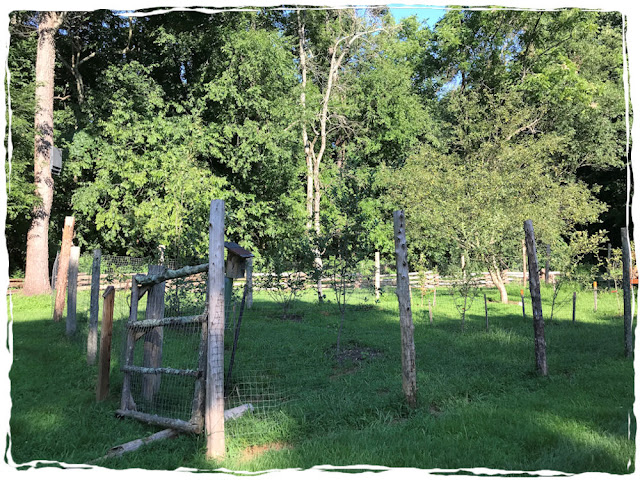 New since we were here last is another fenced in area where apple trees have been planted, or maybe other fruit trees.  A little too far away to identify what was growing.  There was a yellow pumpkin that had grown outside the first fenced off garden, ready and waiting for any critter to have a treat. If you go here it will tell you all about the flowers of the pumpkin. 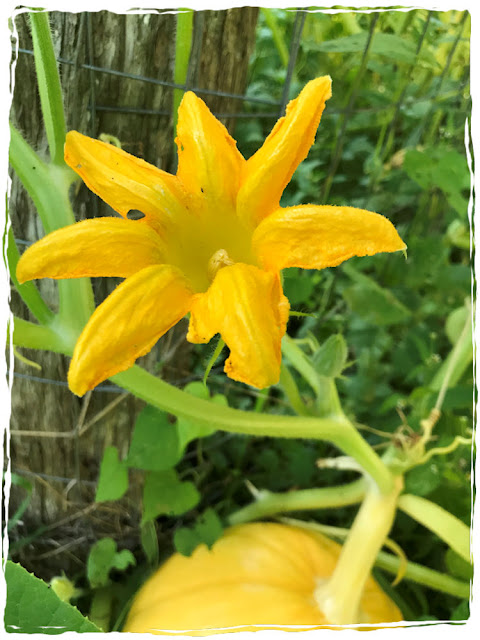 We spotted critters around the garden but with just the cell phone it was hard to get any decent close-ups.  Gregg managed to get a photo of a rabbit.  We saw another on the other side of the garden half an hour later. I am always wary of walking over uneven grassy areas, since I put my foot down a rabbit hole years ago and had the worst ankle sprain of my life.  I saw a couple of rabbit holes but thankfully they were quite visible.  Earlier we saw a chipmunk scurrying across the path, and several birds were at the feeders.  Next time we won't forget our other camera. 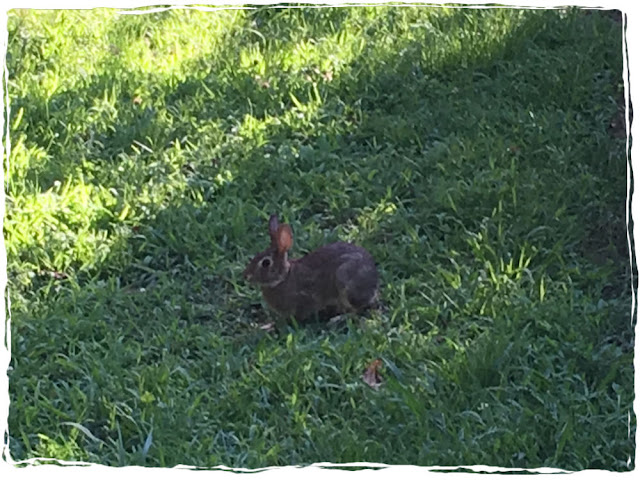 Always interesting to see fungi growing from a tree trunk. 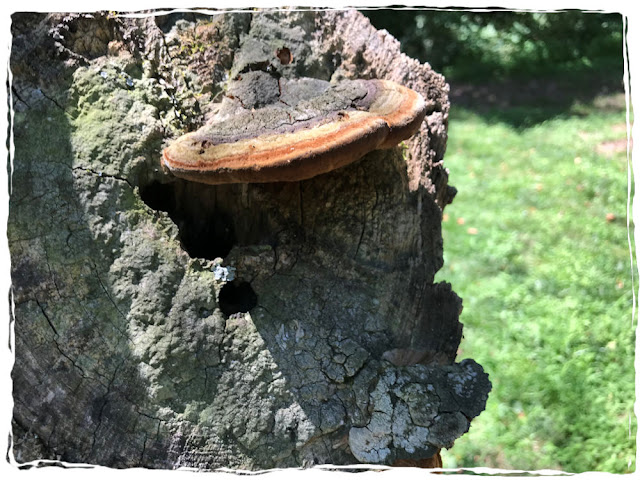 From what I saw here, this looks like Bracket fungus.  They are of "the mushroom family and have been used in folk medicines for centuries.  Bracket fungus info tell us that their hard, woody bodies were ground to powder and used in teas.  Unlike many of their mushroom cousins, most are inedible and of the few that can be eaten, most are poisonous."

You really have to know your mushrooms and as I don't, there is no way I would pick any without a serious expert along.  I do remember the field mushrooms when I was young, but Mother would buy them from the greengrocer.  They were delicious, as big as dinner plates some of them. 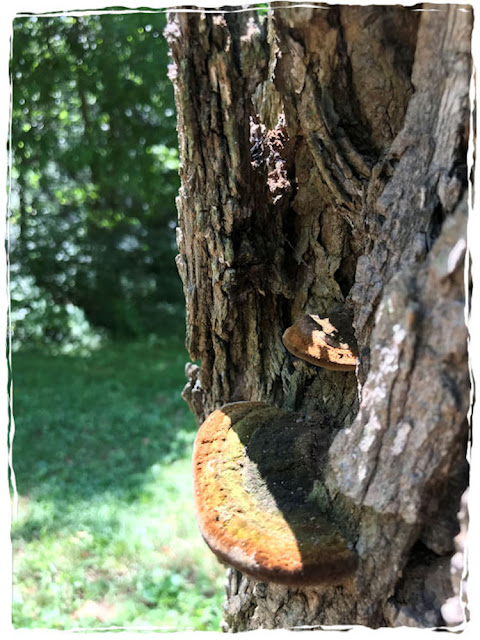 So, that is my post for today.  I hope you enjoyed it and thank you for visiting.  Enjoy your day. 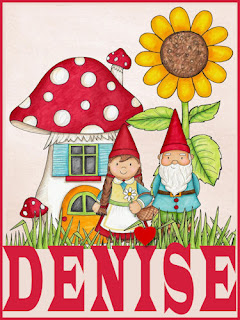