It is 12.34 p.m. and we are out on the lanai.  I found a studio condo rental and it has the most gorgeous view of the ocean.  There is surf rolling in and people on surfboards are trying their luck with the waves.  They are way out there.  We can also see two people just floating, their heads bobbing up and down and disappearing as each wave rolls in.  The sound of the surf is loud and we love it.

There are two palm trees to our left and a smaller tree to our right and we spot a couple of birds but could not identify them.  Every now and again a Cattle Egret visits.  They are a welcome sight. 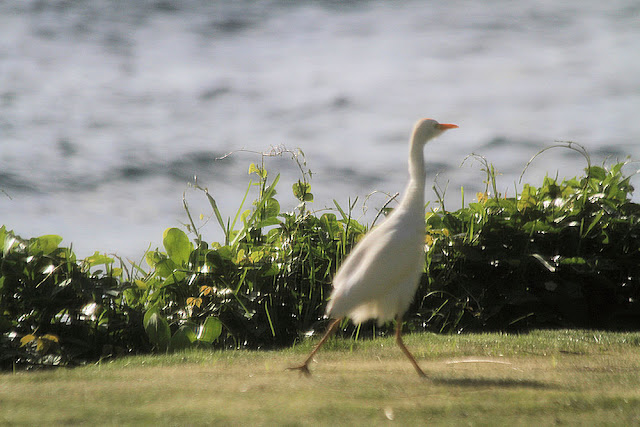 It has been rainy but now the sun is shining and it is blessedly warm and comfortable. 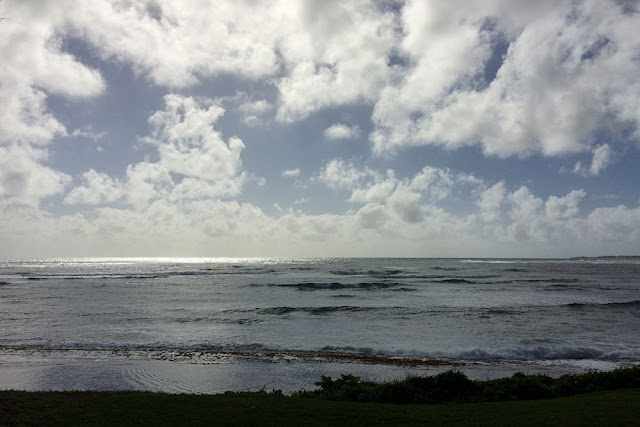 We managed to get out of our hotel in Waikiki at 6.15 a.m. as planned.  I didn't sleep very well, too many things running through my head, but I don't feel tired at all.  Our plane took off at Honolulu Airport a little after 9.00 a.m. and it was a short flight, only half an hour. 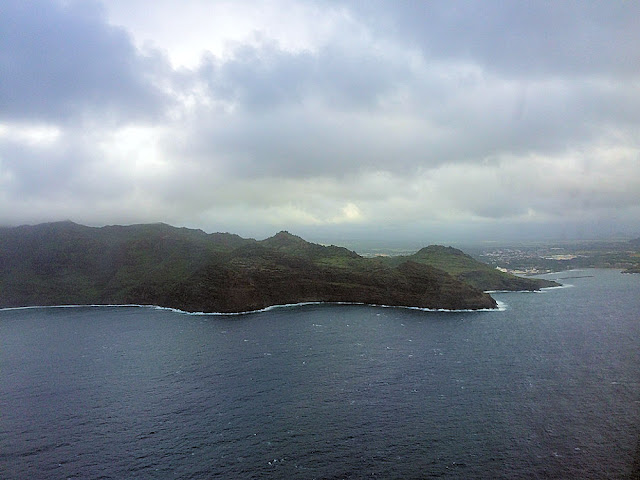 When Kauai came into view it was exciting to see it and I was glad that I had a seat by the window. 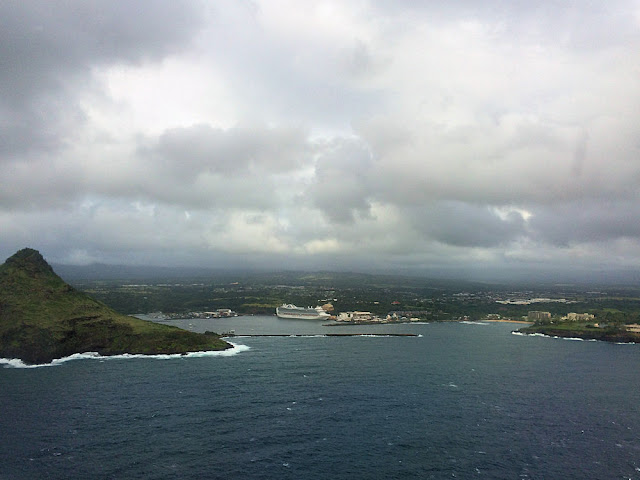 We hopped onto the shuttle to the car rental and three friendly and chatty New Zealand lads started talking to us as they sat opposite.  They were off to Maui after spending a few days here. 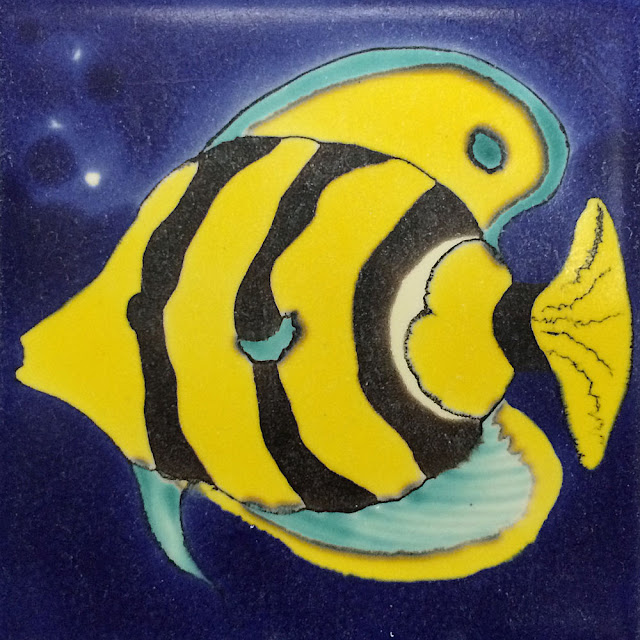 When picking our car up we were hoping to check into our accommodations early but the office hadn't opened yet.  They kept normal working hours so realized this is not like checking into a hotel where you could do so no matter what time it was. 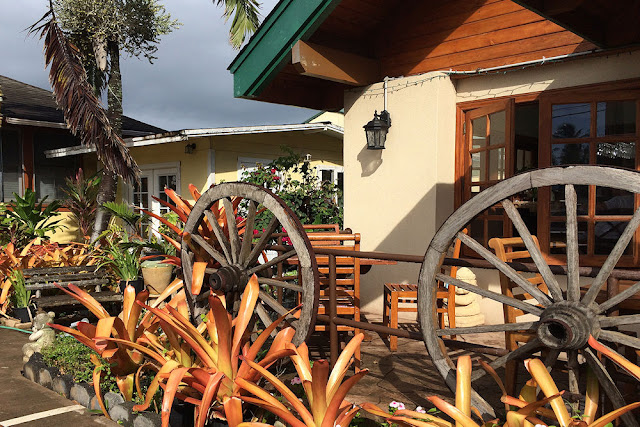 We decided to get some breakfast and stopped at a restaurant not too far up the road.  It was very nice inside and we enjoyed looking at our surroundings. 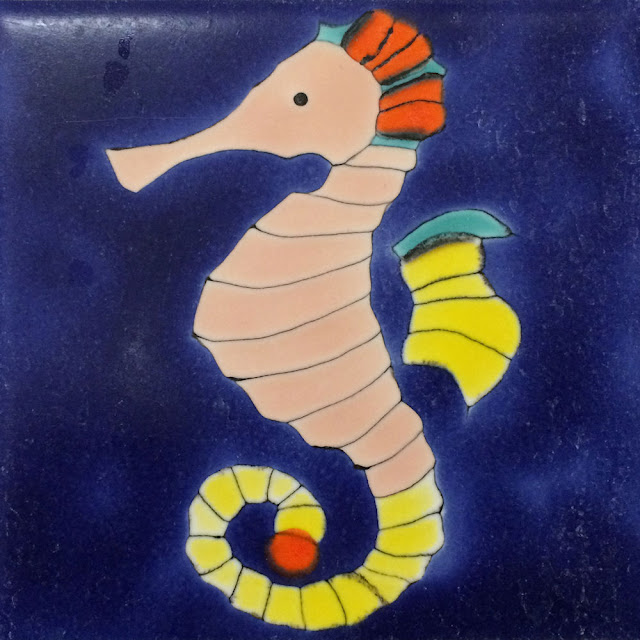 By the time we got back the office was open, and we spoke to a very nice young lad who gave us what we needed.  It wasn't long before we found ourselves at our home-away-from home for the next seven days. 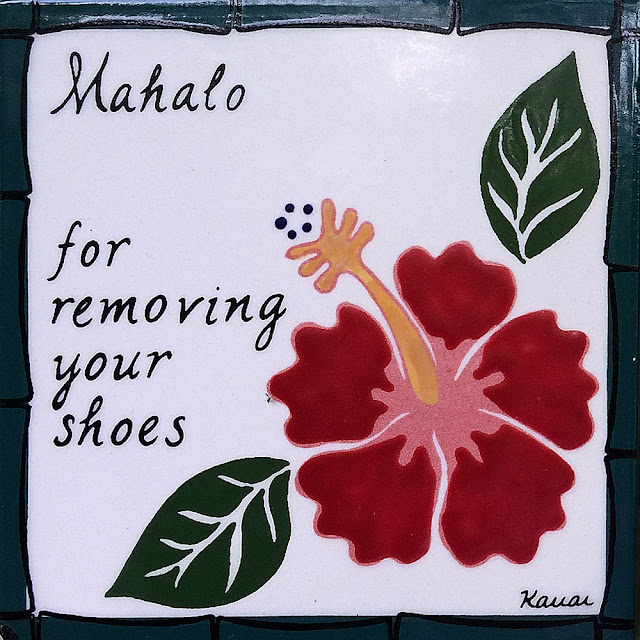 We are very pleased with this place for even though it is small, it is a great little studio with a full kitchen and a bathroom with a shower. 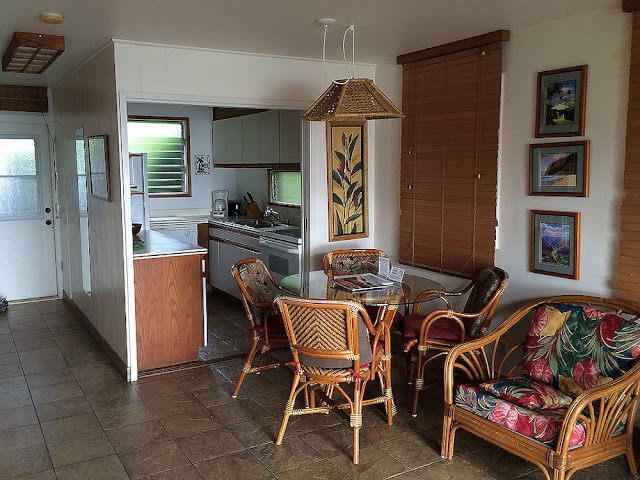 The owners of the condo saw to it that it was equipped with everything we would need,  It had a lovely sitting area.... 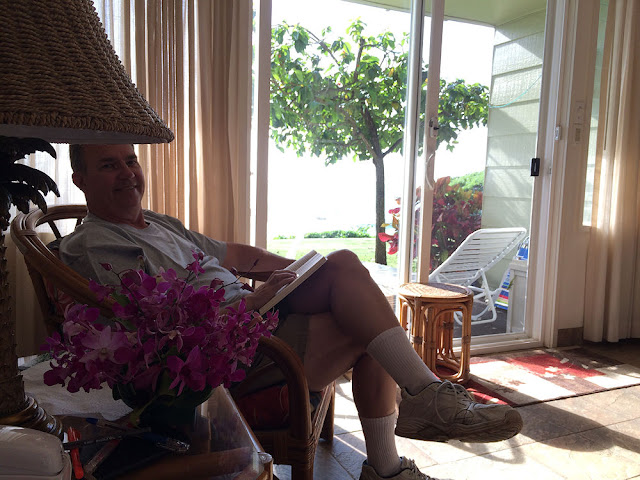 and something that I have never experienced before, a Murphy Bed. 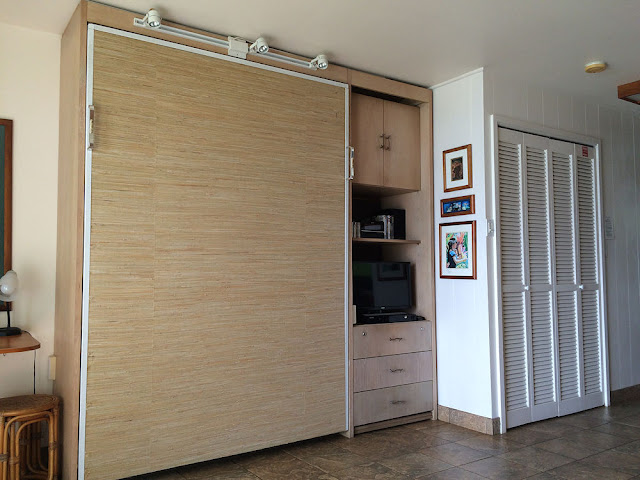 The mattress was the most comfortable one we had ever slept on.  We would pull it down every night, and put it back every morning.  If we were too tired we would leave it down, but that didn't happen too often. 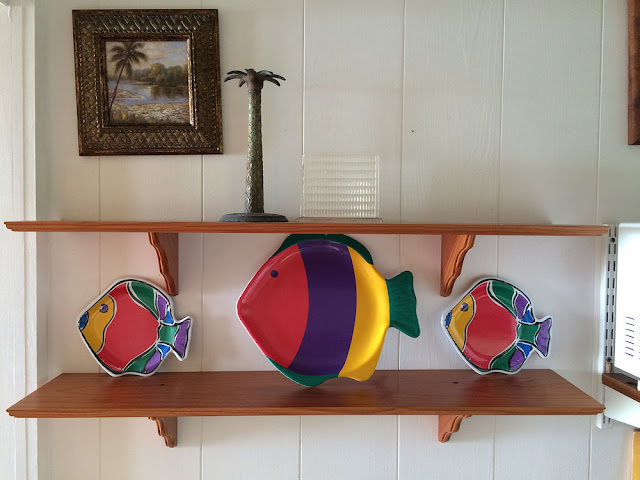 When I booked up eight months ago this was the only unit left.  I noticed that many of the units had regular beds but this one had the Murphy Bed.  I wasn't sure as I had never slept on one but Gregg said he had no problem with that, and we booked the studio.  And when I saw how close it was to the water, that sealed it. Also I had read the reviews online and they were all very positive. During our holiday I also read the guest book and people had been coming back to this particular unit for years, one couple had booked up for their holidays the next two years. Each condo is individually owned and decorated but looked after by an agency. 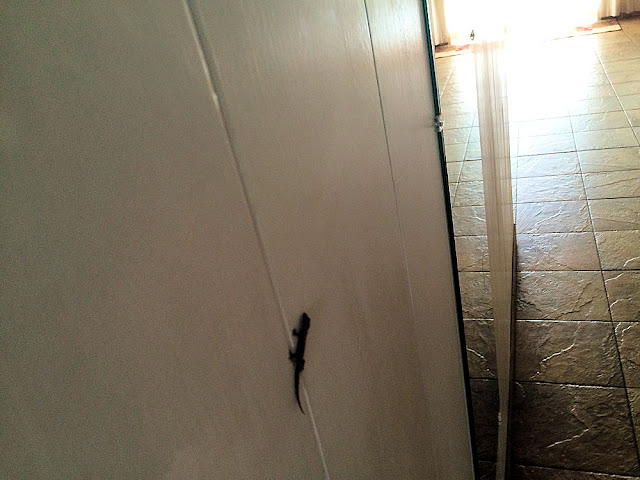 One funny thing happened when we first opened the door.  Gregg stopped me in my tracks and pointed as a tiny lizard ran up the wall and disappeared behind a painting.  It was very nice of him to welcome us but we didn't see him for the rest of our stay.  I kept looking for him but didn't have to worry about lizard photos as there were a couple of them.... 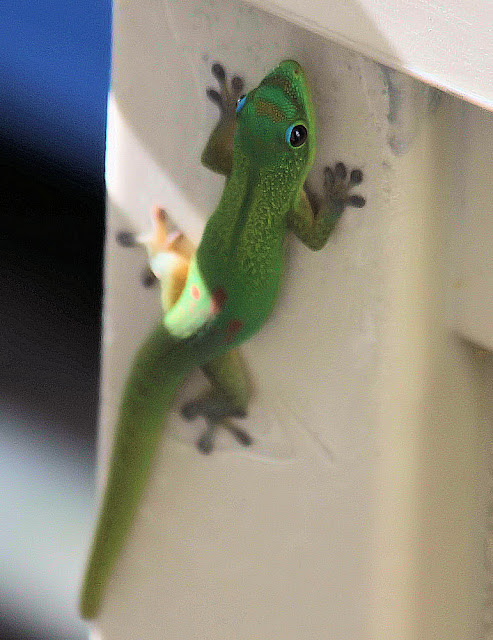 and they visited the lanai every day.  This little green guy is called a Gold dust day gecko, and you can read about him here. 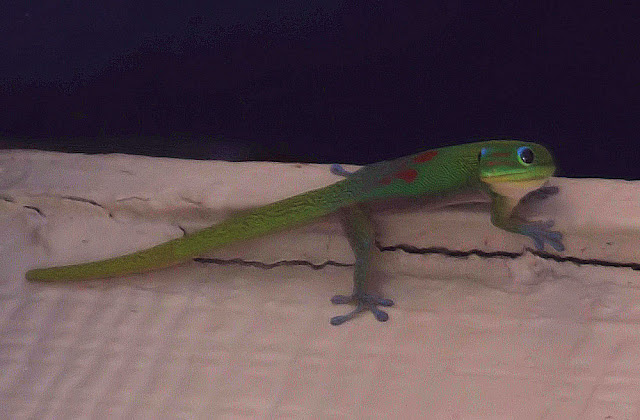 There is an iron rail fence in front of the property where we park our car, but it is covered with the most lush, green and red foliage which is dotted with yellow hibiscus flowers. 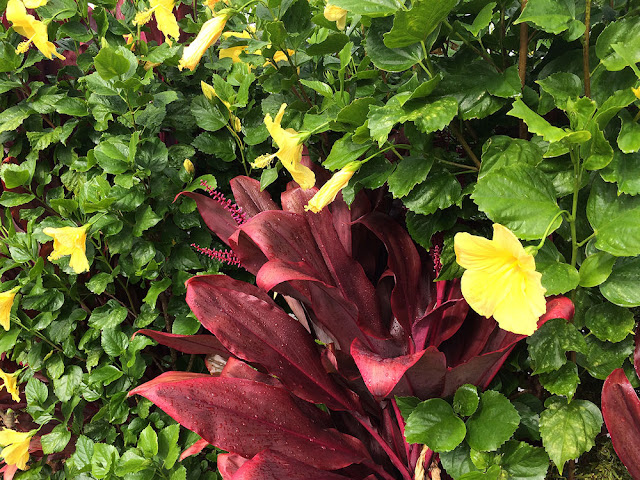 They put on quite a show for us, perfect! 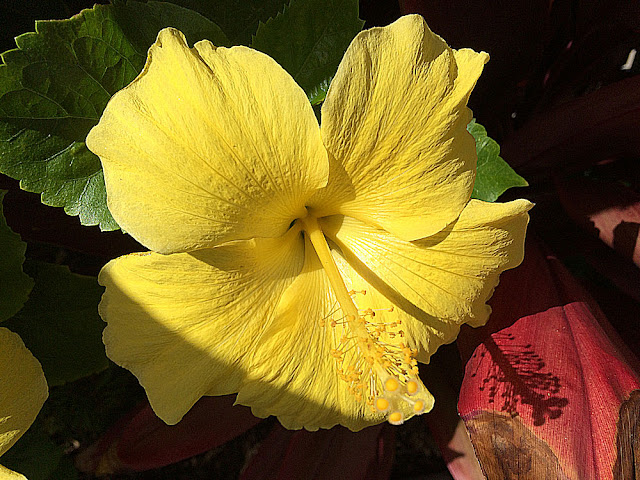 We are meeting up with Gregg's sister, husband and son tonight.  We are to meet at a hotel at seven.

(This is one of the prints on the wall of the condo.)

Gregg pulled the Murphy Bed down for a snooze.  Rolls reversed today I am sitting out on the lanai on one of the lounge chairs, listening to the surf and taking in the view again.  It is sunny at 2.03 p.m. 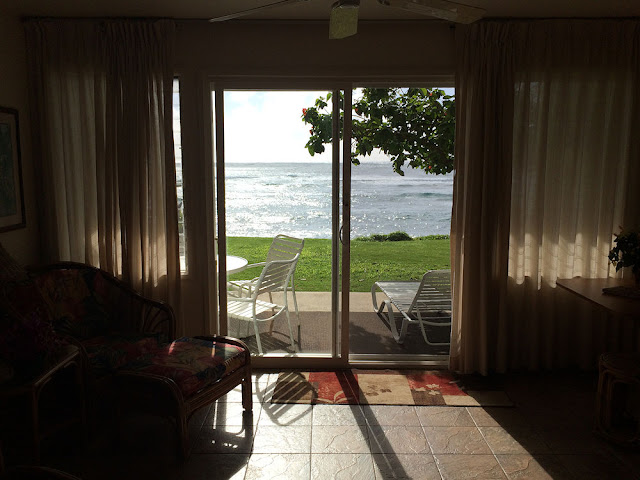 I have been reading the guest book that goes back a couple of years and as I said before, several people have have been coming back year after year.  Two couples in particular, Canadians and another from Washington State.  They gave glowing reviews.As I look around the condo it has a lot of the old world charm that we love so much, very prettily decorated in a tropical theme. 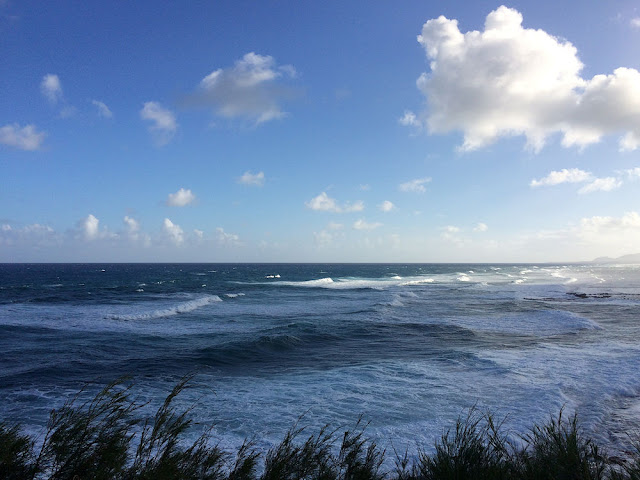 Before we left to meet up with the family, we went for a ride.  Gregg stopped at one of the overlooks where the marker said that whales and spinner dolphins could be seen. 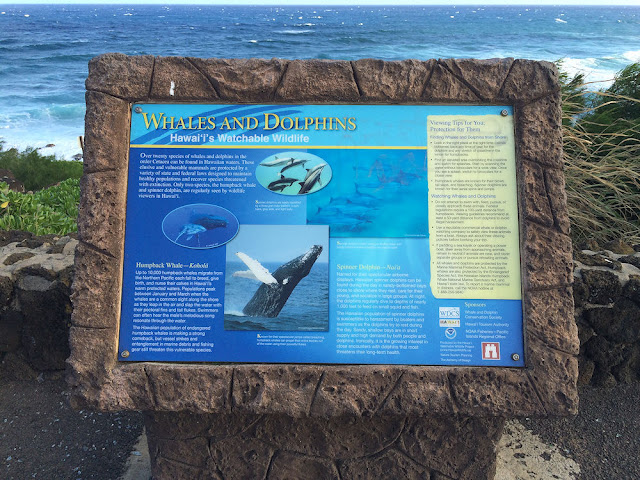 We couldn't spot any but did meet a nice lady who stopped beside us as she was reversing, and chatted through her passenger window as we got out of our car.  She came from Pennsylvania originally, had been here for years, had a daughter living on Kauai and another two daughters living on Oahu.

At 6.30 p.m. we met up with Gregg's sister, husband and her youngest son, and had a very nice evening with them.  We had missed their oldest son by a couple of days as he had to return to the mainland for work.  We left when it was time to take their son to the airport, as he also had to fly home for work.

When we got back we pulled the Murphy Bed down, and went to sleep with the sound of the surf in our ears.  No problems sleeping tonight.


If you missed any of my daily journals, I am sharing their links below.